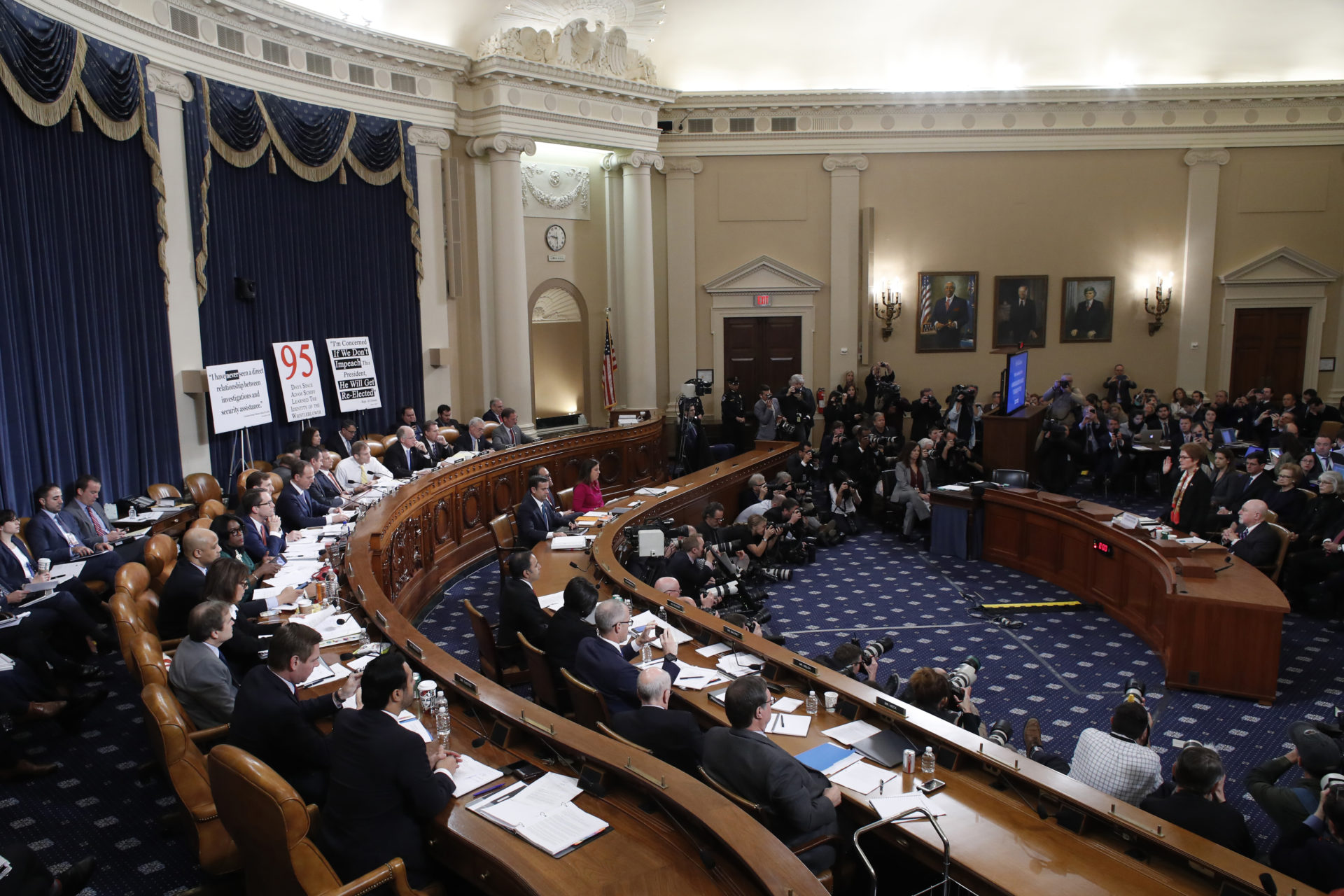 Former U.S. Ambassador to Ukraine Marie Yovanovitch is sworn ahead of testimony before the House Intelligence Committee on Nov. 15. A new poll finds public support for the inquiry did not increase in the wake of the first public impeachment hearings. (Alex Brandon-Pool/Getty Images)
By Eli Yokley

The first week of the House’s public impeachment hearings into President Donald Trump did not move public support for the inquiry in Democrats’ favor, according to a new Morning Consult/Politico poll.

The Nov. 15-17 survey found that 48 percent of voters support the inquiry and 45 percent oppose it, a net drop of 5 percentage points since a Nov. 8-10 poll. At the same time, views about how Democrats are handling the inquiry — which is probing Trump’s alleged pressure on Ukraine to investigate his political rivals in exchange for U.S. security assistance — were statistically unchanged, with 42 percent approving and 46 percent disapproving. 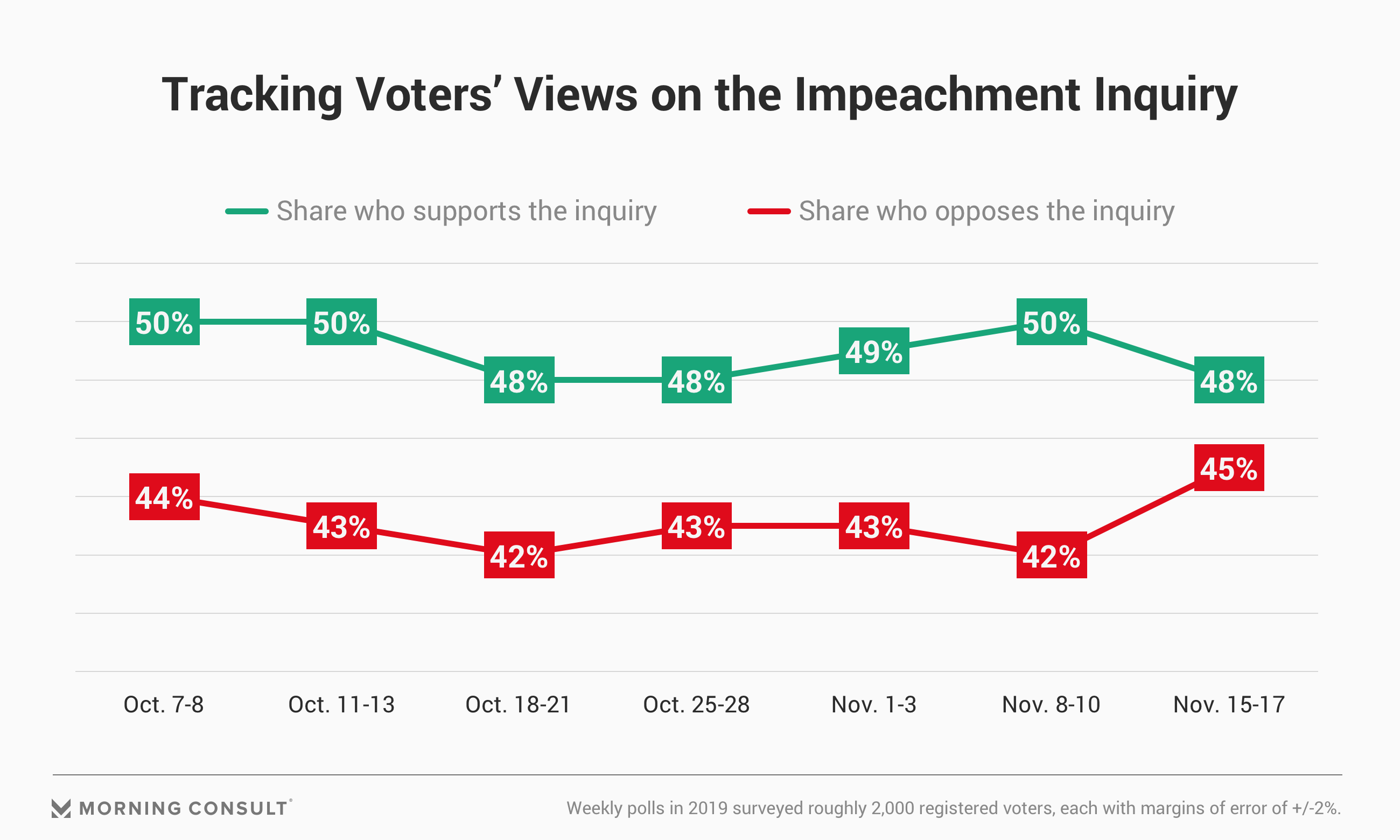 The latest poll, which comes as the investigation enters its second week in the public spotlight, marked the lowest net support for the impeachment inquiry and the largest week-to-week shift in views on the matter since Morning Consult began tracking the issue in early October. Nine current and former officials are set to testify before the House Intelligence Committee this week.

Last week, lawmakers heard public testimony from three officials involved in Ukraine policy: William Taylor, the top U.S. diplomat in Ukraine; State Department official George Kent; and Marie Yovanovitch, the former U.S. ambassador to Ukraine. According to Nielsen, an estimated 13.8 million tuned in for Nov. 13 testimony from Taylor and Kent, while that figure reportedly fell by more than 1 million for Yovanovich’s Nov. 15 appearance.

At the same time, 28 percent said they had seen, read or heard “a lot” about Yovanovitch’s testimony, compared  with 21 percent who said the same of Taylor’s and Kent’s. 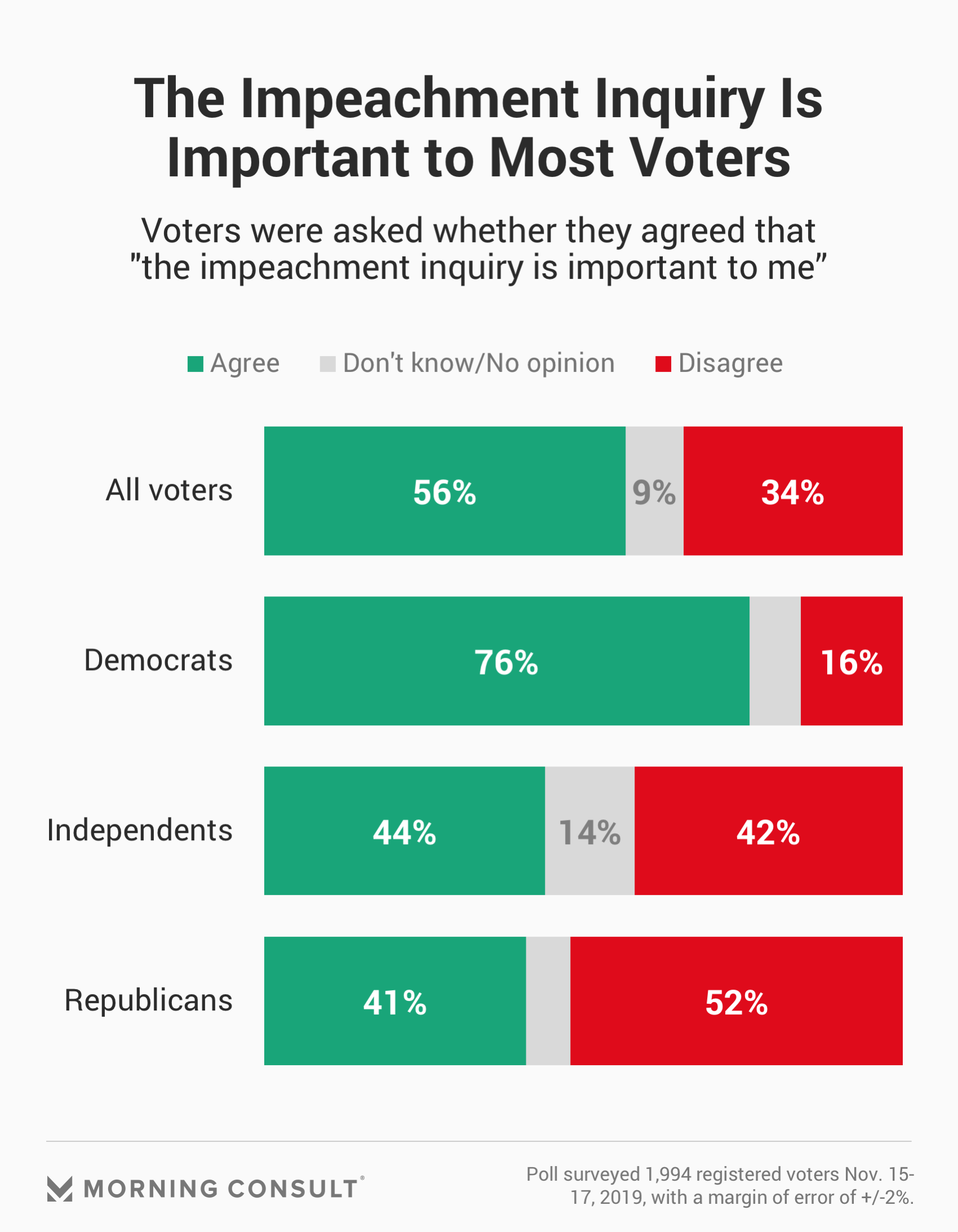 While news reports indicate that impeachment hasn’t been a big topic of discussion on the campaign trail so far, 56 percent of all voters and 76 percent of Democrats agreed that the impeachment inquiry is important to them, and most voters (58 percent) said they’re following the media coverage of the inquiry, compared with 41 percent who said they are not.

On the key point of the impeachment inquiry, the bulk of voters (48 percent) said they believed that the Trump administration probably or definitely withheld military aid from Ukraine in order to pressure the country’s government to investigate the president’s domestic political rivals — the same share who said they believe Trump abused his power to influence the 2020 election. Those figures were statistically unchanged from last week, despite testimony from Taylor that provided more evidence indicating that Trump exerted force on Kyiv in order to settle domestic political scores.

House Democrats will have another chance this week to shift perceptions as lawmakers hear testimony from officials closer to Trump, such as U.S. Ambassador to the European Union Gordon Sondland, and Lt. Col. Alexander Vindman, a National Security Council aide who was on Trump’s July 25 call with Ukranian President Volodymyr Zelensky.