How Moderators’ Debate Questions Line Up With Their Gender, Race and Ethnicity

Women, who have asked 30% of the questions in the past six debates, will ask them all on Wednesday

As a familiar lineup of Democratic presidential hopefuls prepare to face off at Wednesday night’s debate, a mainstay of past matchups will be missing from the moderator’s desk: a white man.

The MSNBC-Washington Post debate in Atlanta will be moderated by four women — three white women and a woman of color — amid an effort by the Democratic National Committee to elevate different perspectives and diversify the slate of people asking questions. The four women will join four others, including a woman of color, who have moderated the first six debates, along with three black men, two Latino men and five white men.

A Morning Consult analysis of the nearly 600 questions and follow-ups asked in the six 2020 primary debates to date found that women were more likely than men to ask about the economy, climate change and education, while male moderators spent more of their time on health care and foreign policy.

If you only have women asking about reproductive rights, or Latinos asking about immigration, then you’re marginalizing those concerns.

Female moderators, who have made up a third of the moderating pool, asked 30 percent of the questions, and were just as likely as men to pose a question to a male candidate or a female candidate, though women were slightly more likely to pose follow-up questions to a woman than male moderators were to a man.

And when it came to abortion and equal pay, two issues that have conventionally been viewed as predominantly affecting women, female moderators were far more likely than men to pose the question, with those topics accounting for 8 percent of their queries since June.

“I think having an all-woman panel, and talking about the range of issues we expect candidates to cover, legitimizes the fact that women care about the same things other voters do,” said Melissa Deckman, who chairs the political science department at Washington College in Maryland.

Deckman said there is value in having people from marginalized or underrepresented groups on stage to raise questions with a specific focus on their own community.

She made the comparison to a debate in political science research about the strength of descriptive representation in government (where, for example, a black lawmaker is assumed to be a better representative for issues dear to black voters) and substantive representation (where anybody could be an effective advocate for marginalized groups if they are fighting for their concerns).

The descriptive representation theory has played out on stage in each of the Democratic debates: Female moderators asked 14 of the 18 questions about abortion and equal pay, focusing generally on the landmark Roe v. Wade Supreme Court case and how to compel businesses to address the pay gap between men and women. Forty-one percent of questions involving immigration were asked by Latino moderators, and 44 percent of the questions pertaining to civil rights for African Americans — such as criminal justice and racial division — were posed by black moderators.

“There is this notion that a woman asking a question about the pay gap or harassment is probably going to be more effective,” Deckman said, because a woman is likely more attuned to those issues due to upbringing and socialization. “The flip side is, if you only have women asking about reproductive rights, or Latinos asking about immigration, then you’re marginalizing those concerns.”

Aimee Allison, founder and president of She the People, a progressive group that hosted an April presidential forum focused on important issues for women of color, said questions that affect specific communities can and should be asked by moderators who don’t identify with those groups, so long as those groups are represented during the drafting process.

“You need to intentionally solicit feedback in terms of the way we ask questions,” she said. “This is a lesson for producers, too. I don’t think this is beyond what the producers or networks can do. They can just say, ‘Who’s not here? Do we have every race and gender here?’ Let’s brainstorm based on that.”

Inquiries on abortion and equal pay made up just 3 percent of the nearly 600 questions and follow-ups that have been asked in the first six debates, while questions involving civil rights have made up 9 percent. And 11 percent of the questions have focused on President Donald Trump’s No. 1 issue: immigration. 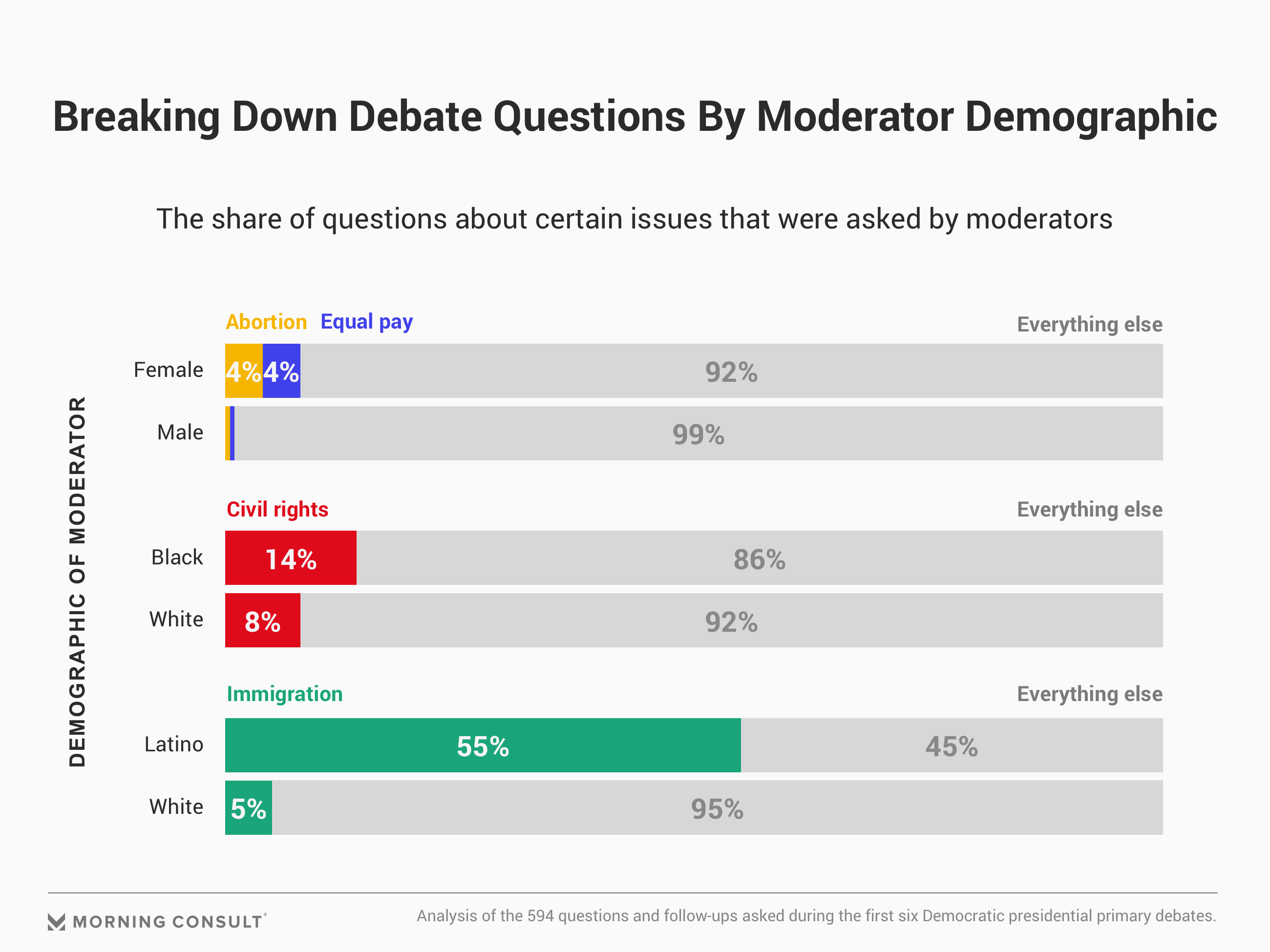 It also appeared, to a lesser extent, in who asked about civil rights: Fourteen percent of the questions asked by black moderators had to do with issues ranging from criminal justice to racial division, compared to 8 percent of those asked by the white moderators.

Allison said she viewed the push to diversify the pool of moderators as a positive step, though she said women of color have been underrepresented at the moderators’ desk for a party that counts them as its backbone.

“It’s necessarily not sufficient to have majority white women. You have to think about who’s in the Democratic Party,” she said. “There’s a lot of qualified women of color who could be on that stage.”