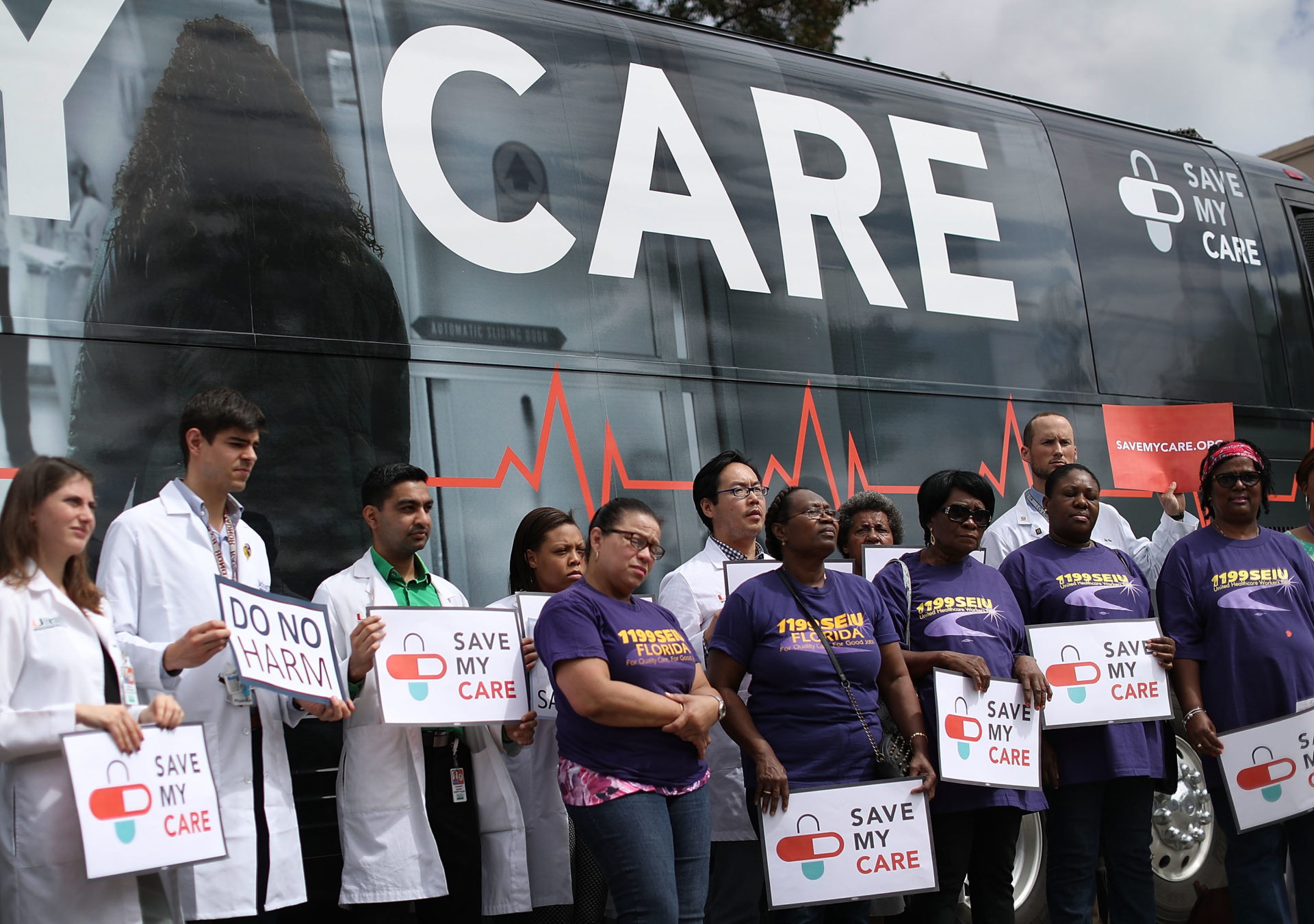 Nurses, doctors, health advocates and patients rally in support of the Affordable Care Act near the Jackson Memorial hospital in Miami on March 2, 2017. A coalition of 21 leaders representing national civil rights and progressive groups is sending a letter Thursday morning to Congress highlighting the importance of reaching health equity. (Joe Raedle/Getty Images)
By Yusra Murad

A coalition of 21 leaders representing national civil rights and progressive groups is sending a letter Thursday morning to Congress highlighting the importance of reaching health equity.

Led by the Southern Christian Leadership Conference, the letter marks the first time the group has come together to produce for Congress a set of unifying principles to address and eliminate health disparities in underrepresented populations.

Signatories including the NAACP, The Hispanic Institute and the National LGBT Chamber of Commerce, among others, are arguing that the communities they represent have been excluded from the Trump administration’s and Congress’ policymaking processes, reflected by adverse health outcomes disproportionately affecting marginalized groups.

Kevin Kimble, president of SCLC’s Washington, D.C., chapter, said the organization’s three leading priorities are health care, income and voter rights. And because any advocacy efforts require individuals to be in good health, health care felt like the natural place to start.

Rather than using the letter to push for specific legislation, the coalition is hoping to shed light on the fact that underserved communities have historically faced barriers in having a voice at the negotiating table.

“We believe first we have to be in the room for the conversations,” Kimble said. “We also realize any kind of health care bill is going to be huge and take forever. We aren’t wedded to the process yet. We need to be in that process.”

The letter proposes an array of policy solutions running the gamut from price transparency to the prevention of profiteering by pharmacy benefit managers in the drug supply chain, highlighting the unique consequences of the status quo for racial and ethnic minorities.

While a gridlocked Congress has struggled to deliver on health policy this year, addressing the social determinants of health is a leading priority for major actors spanning the sectors of the health industry, and experts predict an accelerating shift toward value-based care. The first federal proposal on social determinants was referred in July to the House Committee on Energy and Commerce by a bipartisan group of House lawmakers, led by Reps. Cheri Bustos (D-Ill.) and Tom Cole (R-Okla.), but has yet to move forward.

Consolidating advice from doctors, public health experts and health equity advocates, the coalition is requesting lawmakers mulling over dozens of health-related bills to invite feedback from their communities. Their priorities extend outside of the health policy areas that get the most attention in Washington, such as lack of diverse representation in clinical trials for new drugs, where the signatories are calling on Congress to identify and eliminate barriers to enrollment, while taking steps to ensure outreach is culturally appropriate.

With a little more than three weeks left of open enrollment season for plans on the Affordable Care Act exchange, the group is also asking Congress to reduce obstacles to coverage by supporting transparency measures specifically targeted at diverse communities, such as providing more language options for plan information.

The letter will be sent to members of the Congressional Black Caucus and leadership of House panels with health care jurisdiction: the Committees on Ways and Means, Energy and Commerce, and Education and Labor.