Sen. Elizabeth Warren (D-Mass.) at the Democratic presidential debate in Atlanta on Nov. 20. The latest Morning Consult poll, conducted after the debate, found 15 percent of likely Democratic primary voters prefer her as their first choice, which is at its lowest since late August. (Alex Wong/Getty Images)
By Eli Yokley

After a steady late-summer rise, Sen. Elizabeth Warren (D-Mass.) is losing ground with the Democratic electorate.

The finding marks a 6-point drop from the 21 percent first-choice vote share she had held from late September through a poll conducted Oct. 16-20 following the Oct. 15 Democratic presidential debate. It erased the slight lead she held over Sen. Bernie Sanders (I-Vt.), a candidate whose policies appeal to the type of Democratic voter her own policy plans appear to target. 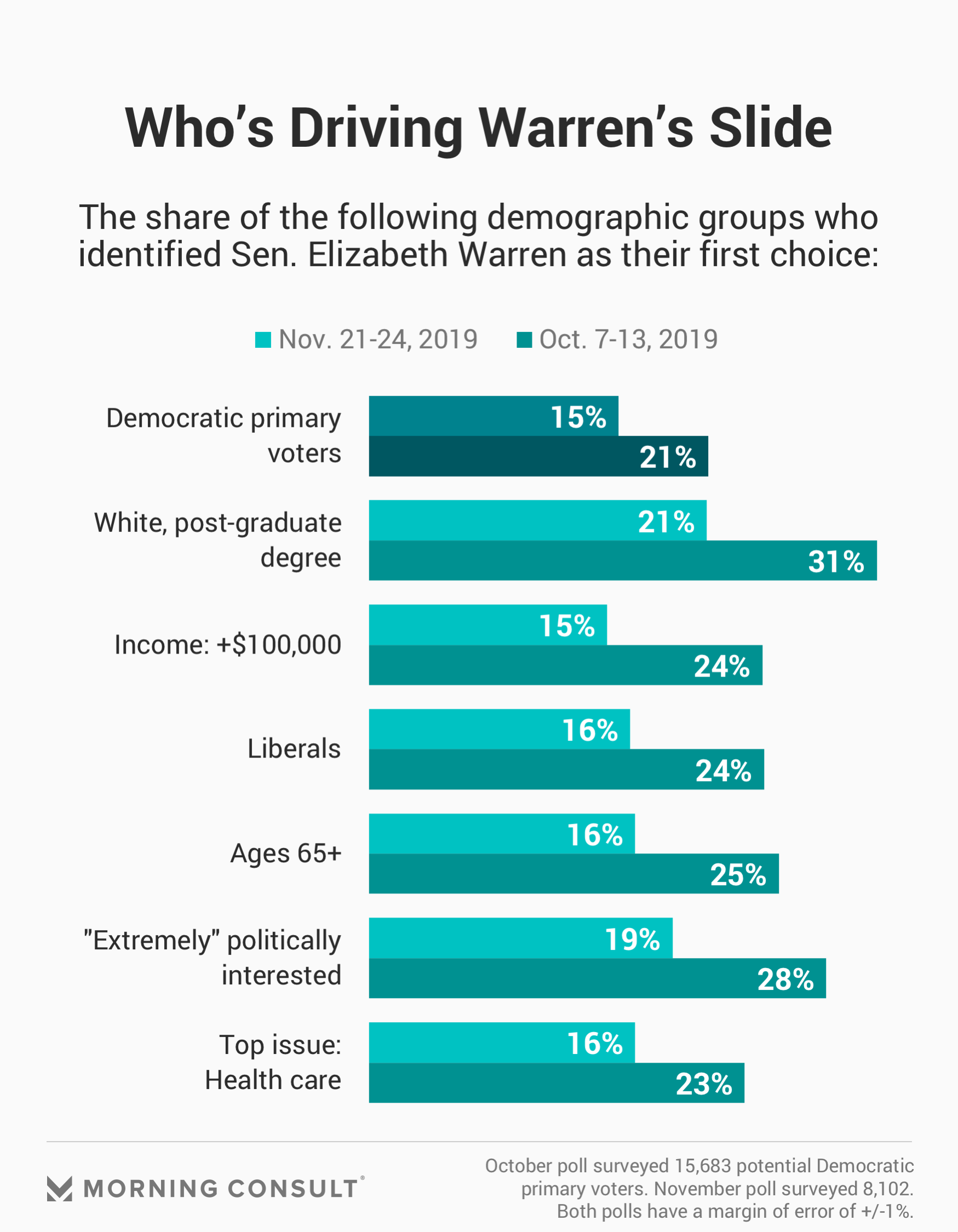 The decline in her polling numbers has been driven by statistically significant drops in support among almost every demographic group surveyed — and, most notably, among the highest-educated voters, the oldest voters and voters who identify as liberal and very liberal — compared to her vote share in an Oct. 7-13 poll conducted before last month’s debate. Warren lost her lead with liberal voters and now trails Sanders by 4 points, 16 percent to 20 percent.

The point at which her support among key groups began to fall matches the beginning of a flashpoint for her candidacy over health care, a top issue for Democratic voters. In the week following the Oct. 15 debate, her first-choice share among the most politically engaged voters fell 2 points, to 26 percent. In the October debate, South Bend Mayor Pete Buttigieg of Indiana criticized Warren for refusing to say whether taxes would go up for middle-class Americans under her “Medicare for All” plan.

Three weeks later, Warren released her proposal to pay for the expansion of the federally funded health care coverage — but in the weeks since, her first-choice support has continued to fall.

But the emergence of two new candidates has not shaken up the overall race, according to the latest poll.

Former Massachusetts Gov. Deval Patrick, who launched his campaign on Nov. 14, received less than 1 percent of the first-choice vote. And former New York City Mayor Michael Bloomberg, who officially launched his campaign on Sunday after weeks of speculation and the start of a multimillion-dollar television advertising campaign, is the first choice for 2 percent of likely Democratic primary voters.