Democrats, all voters prefer public option or single-payer to the senator’s transition plan

Stuck between her $20.5 trillion plan and a hard place, Elizabeth Warren — after a declaration of “I’m with Bernie” bought the Democratic presidential candidate several months to construct a more comprehensive answer on health care — introduced in November her proposal to appease ardent supporters and skeptics alike: Yes to “Medicare for All,” but not quite yet.

In the days following the unveiling of her plan, Warren’s surge stalled and reversed, particularly among Democrats whose top priority heading to the polls is health care. And according to a new Morning Consult survey of 1,997 registered voters, the Massachusetts senator’s proposal to create a public option as a transition to Medicare for All is less popular among both Democrats and the full electorate than Medicare for All itself, suggesting she may be taking a risk in the primary without the promise of a more incremental approach giving her an edge come the general election.

Democrats prefer Medicare for All over temporarily preserving private insurance before introducing Medicare for All legislation after three years, by a margin of 11 points (72 percent to 61 percent). Among all voters surveyed in the poll, which did not identify that strategy as Warren’s, the 52 percent majority that backs Medicare for All outpaces the 46 percent backing Warren’s transition plan. The margin of error is 2 percentage points, while the subsample of 732 Democratic voters carries a 4-point margin of error. 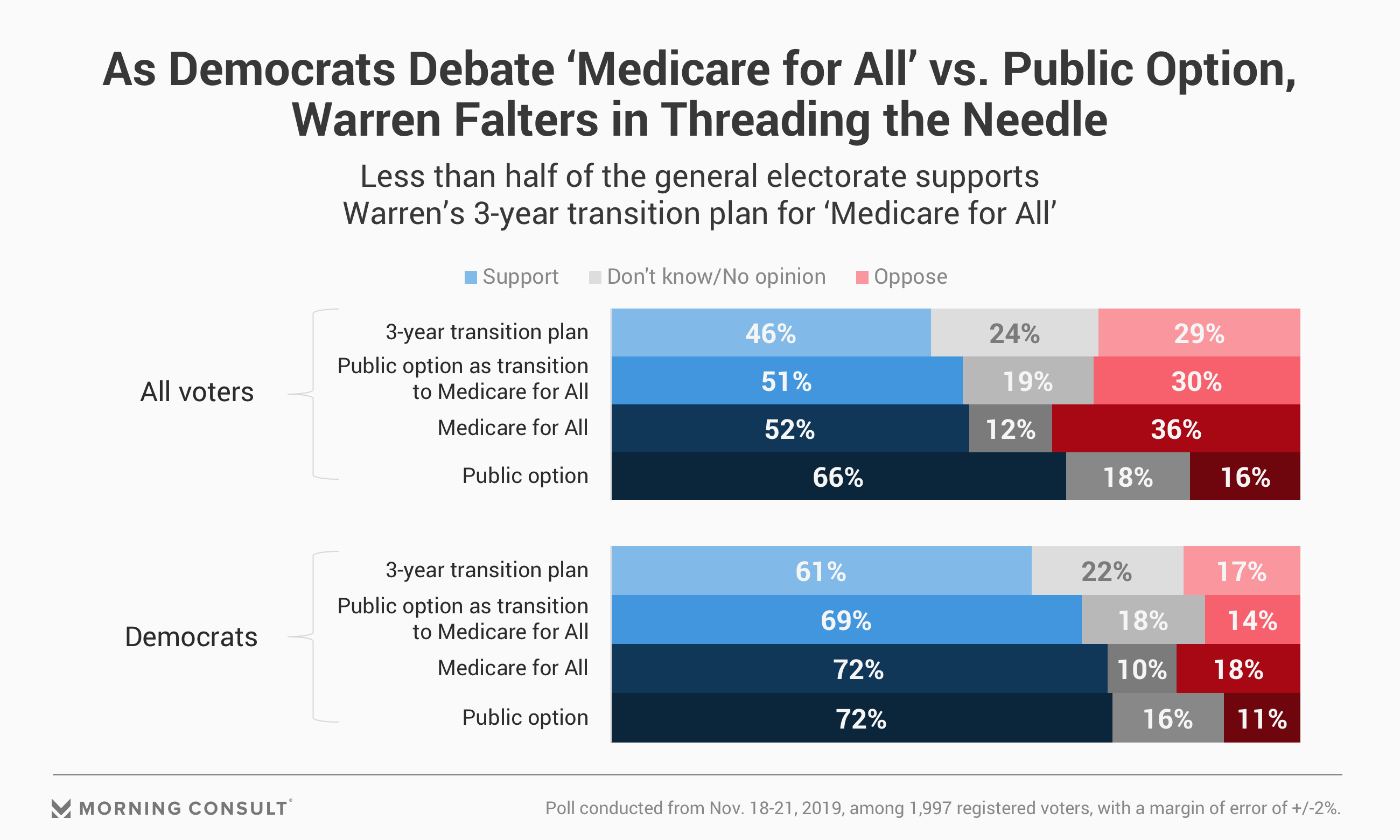 Support for Warren’s three-year plan also lags support for a generic “public option as a transition,” which is roughly equivalent to Medicare for All in popularity. While Sen. Bernie Sanders’ (I-Vt.) bill also includes a four-year transition period, Warren’s proposal to pass a separate piece of legislation — in what would be the year before another presidential election cycle — caused single-payer advocates to question her commitment to pursuing ambitious change from day one.

The Warren campaign did not respond to a request for comment.

Much like activists on the frontlines of the climate crisis, zealous supporters of universal health care say that as much as Medicare for All is a bill, it is also a movement — one fueled not by hope that it can be retooled to fit neatly into the standard policymaking process, but a will to challenge the guardrails of pragmatism to address an emergency.

“The problems we face are so huge that the solutions must be ambitious,” said Kelly Coogan-Gehr, assistant director of public and community advocacy for National Nurses United. “You are not going to get people to hit the streets for the public option. You aren’t going to get people to organize for an incremental reform. People participate in movements because movements have a vision.”

But veteran Democratic strategists and liberal think tanks have been frustrated by what they view as attempts by progressives to push the public option to the right, decrying “moderate” what was once championed by the center-left as too progressive to survive the Senate under former Majority Leader Harry Reid (D-Nev.) in 2010.

But according to Medicare for All activists, that narrative falsely imagines organizers with “public option” scrawled across their picket signs during the Obama years. Adam Gaffney, president of Physicians for a National Health Program, said the group has been pushing for a single-payer plan since its origin in the late 1980s. In the same vein, according to Coogan-Gehr, even as National Nurses United has supported policy revisions like the Affordable Care Act, the union group feels strongly the most effective reform would  challenge the existence of the private insurance industry.

While the fact that two presidential front-runners are supporting Medicare for All is encouraging, Gaffney said “it’s a mistake to break it into two bills.”

“Private insurance companies can quickly outmaneuver the public plan, whether by avoiding sick patients or targeting healthier patients,” he said. “As a result of those dynamics, you have a scenario in which the public option quickly seems less affordable, and that can be damaging.”

While other tenets of Warren’s health plan are popular with the electorate, such as defending the Affordable Care Act in court, the relative unpopularity of adopting a public option before attempting to pass Medicare for All in three years is revealing of just how much language matters. In trying to bridge the gap between her supporters that are deeply committed to systemic change, and a more skeptical chorus of voices urging incremental steps, advocates say Warren may have isolated factions of both groups — cutting already fractionalized bases rather than unifying. 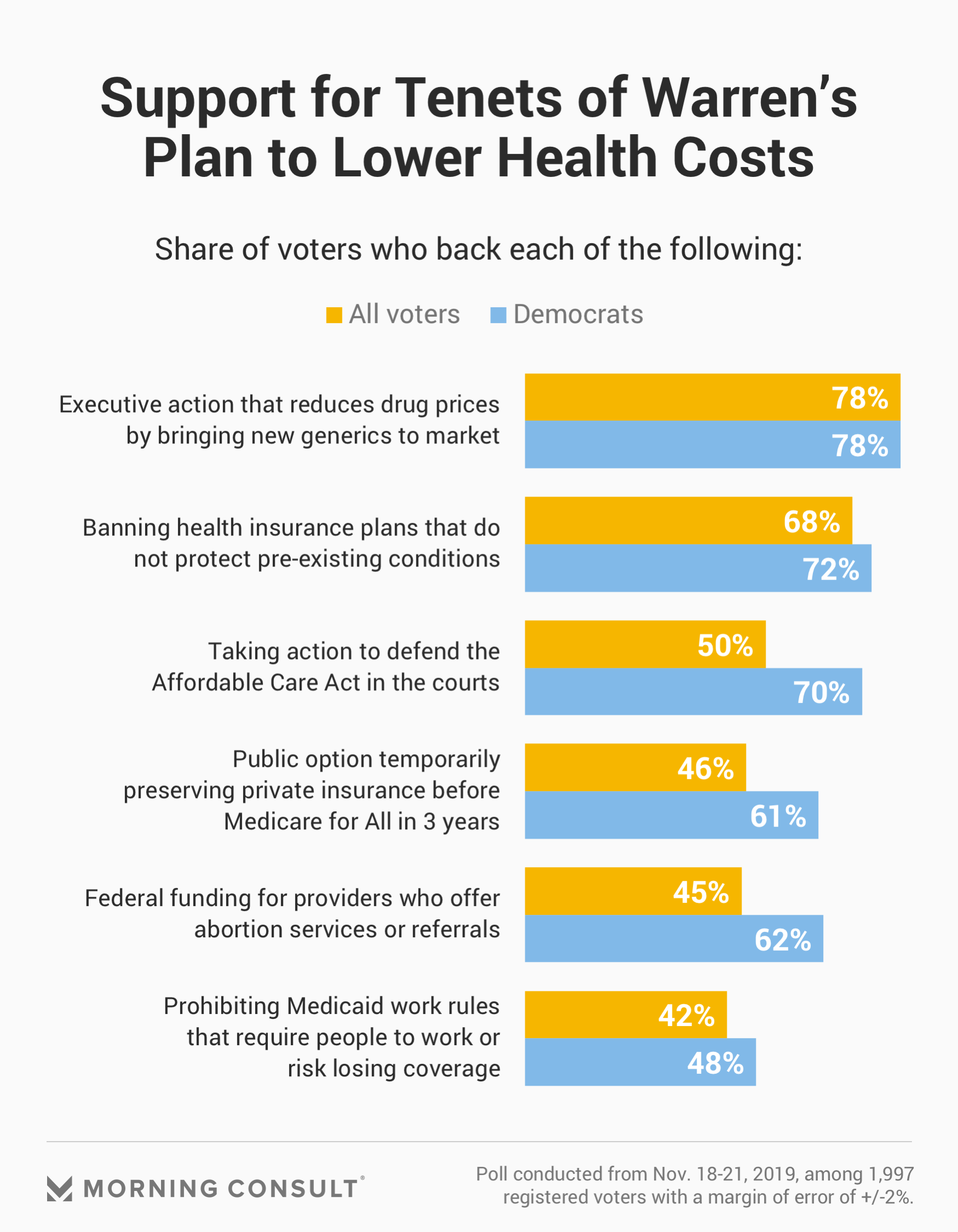 Her drop in the polls has provided an opening for South Bend Mayor Pete Buttigieg of Indiana to break into the pool of front-runners. Buttigieg, like former Vice President Joe Biden, has proposed “Medicare for All who want it,” and has been critical of the Sanders and Warren approaches during the primary debates prior to the unveiling of Warren’s transition plan.

“What voters are saying is, this is neither fish nor fowl,” said Jim Kessler, executive vice president for policy at the center-left think tank Third Way. “What she tried to do is solve a political problem she was having, but it didn’t solve the policy problem.”

Of the elements of Warren’s health plan included in the survey, the most popular is the one that pledges immediate action: using executive authority to reduce the prices of drugs, by bringing more generics to market. Seventy-eight percent of all voters back that proposal, as do 78 percent of Democrats and 81 percent of Republicans.