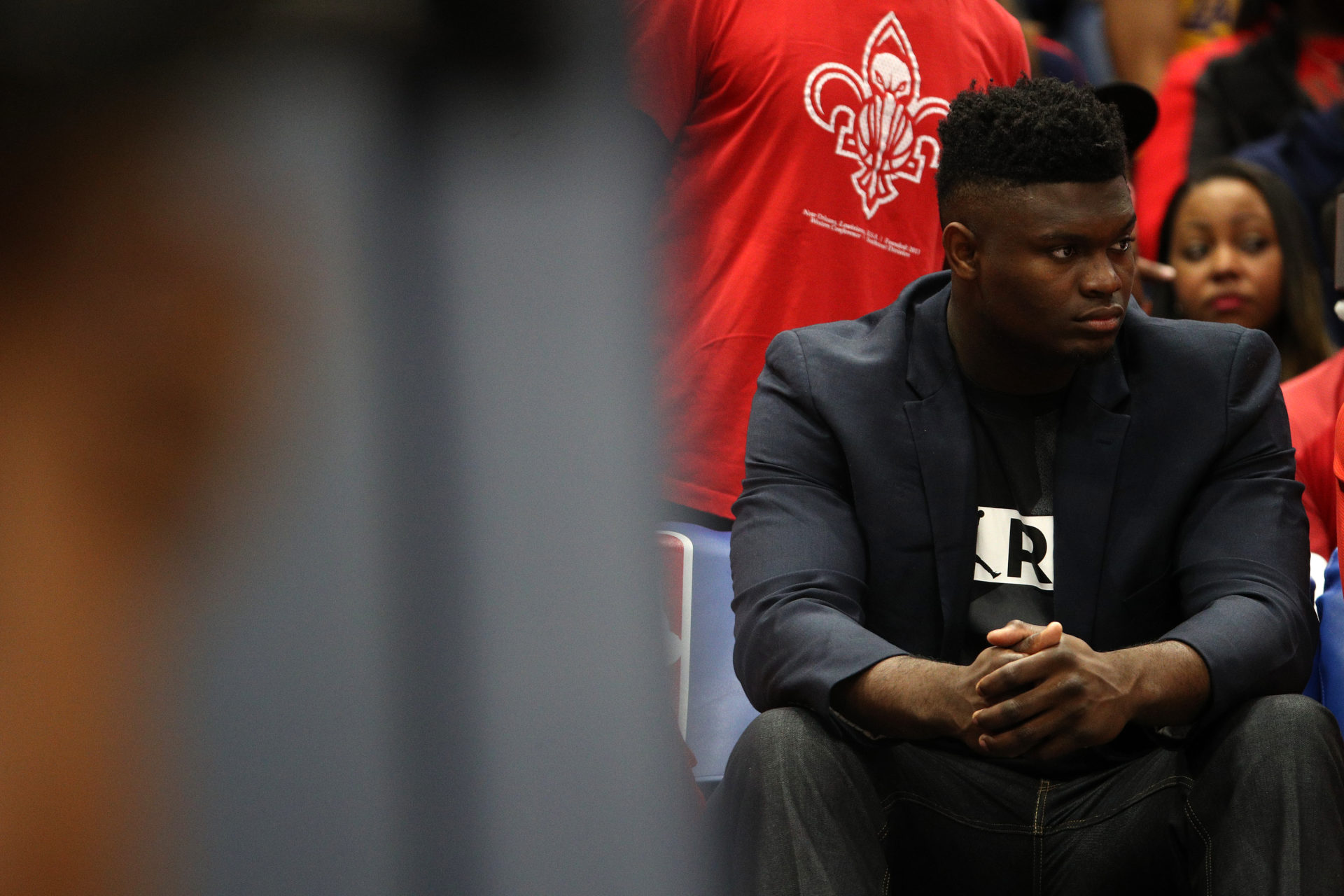 Zion Williamson of the New Orleans Pelicans sits on the bench during the team's Nov. 27 home game against the Los Angeles Lakers. Williamson has yet to feature this season due to injury, a blow for the league's ratings. (Chris Graythen/Getty Images)
By Alex Silverman

The changes to the league calendar reportedly under consideration by the NBA are fairly popular among the league’s self-identified fans, according to a new Morning Consult poll.

ESPN reported on Nov. 23 that the NBA is “engaged in serious discussions with the National Basketball Players Association and broadcast partners on sweeping, dramatic changes to the league calendar.”

The proposals, which would coincide with a shortening of the regular season to a minimum of 78 games (from the current 82), are said to include: Reseeding the four postseason semifinalists (conference finalists), potentially allowing two teams from the same conference to compete in the NBA Finals; introducing a four-team play-in tournament in each conference at the end of the regular season to determine which teams claim the last two playoff spots; and the introduction of an in-season tournament featuring all 30 teams that does not count toward postseason qualification. 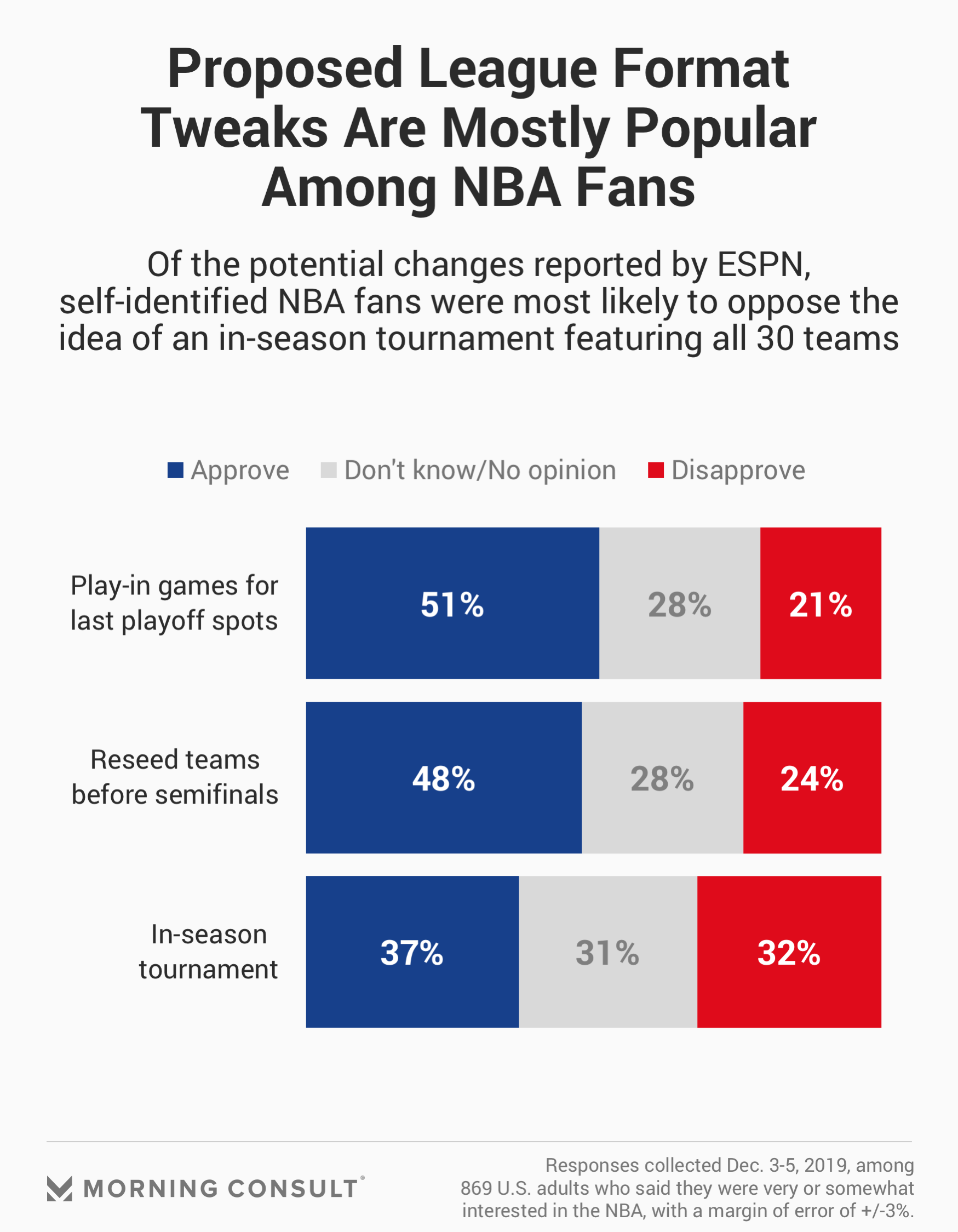 The Dec. 3-5 poll of 869 U.S. adults who said they are “very” or “somewhat” interested in the league found that a lion’s share view all three proposals favorably, along with the shortening of the regular season.

The play-in games to determine the seventh- and eighth-seeded postseason teams in each conference was the most popular of the three tweaks, with 51 percent of fans expressing a favorable view of the idea. Forty-eight percent of fans said they liked the idea of reseeding the final four postseason teams, potentially allowing two teams from the same conference to compete in the NBA Finals. The 30-team in-season tournament was more divisive, with fans nearly split: 37 percent were in favor, compared with 32 percent who viewed it unfavorably.

The margin of error for NBA fans’ responses in the poll is plus or minus 3 percentage points.

The poll also gauged fans’ current interest in the league relative to recent seasons amid much-discussed viewership decreases for nationally televised games. Games on ESPN were averaging 1.5 million viewers following Friday night’s doubleheader, down 19 percent from the same point last season. Sports Business Journal reported on Dec. 2 that average viewership on TNT was down 22 percent year over year. Morning Consult’s poll, however, found that interest among fans this season is essentially flat relative to recent seasons. 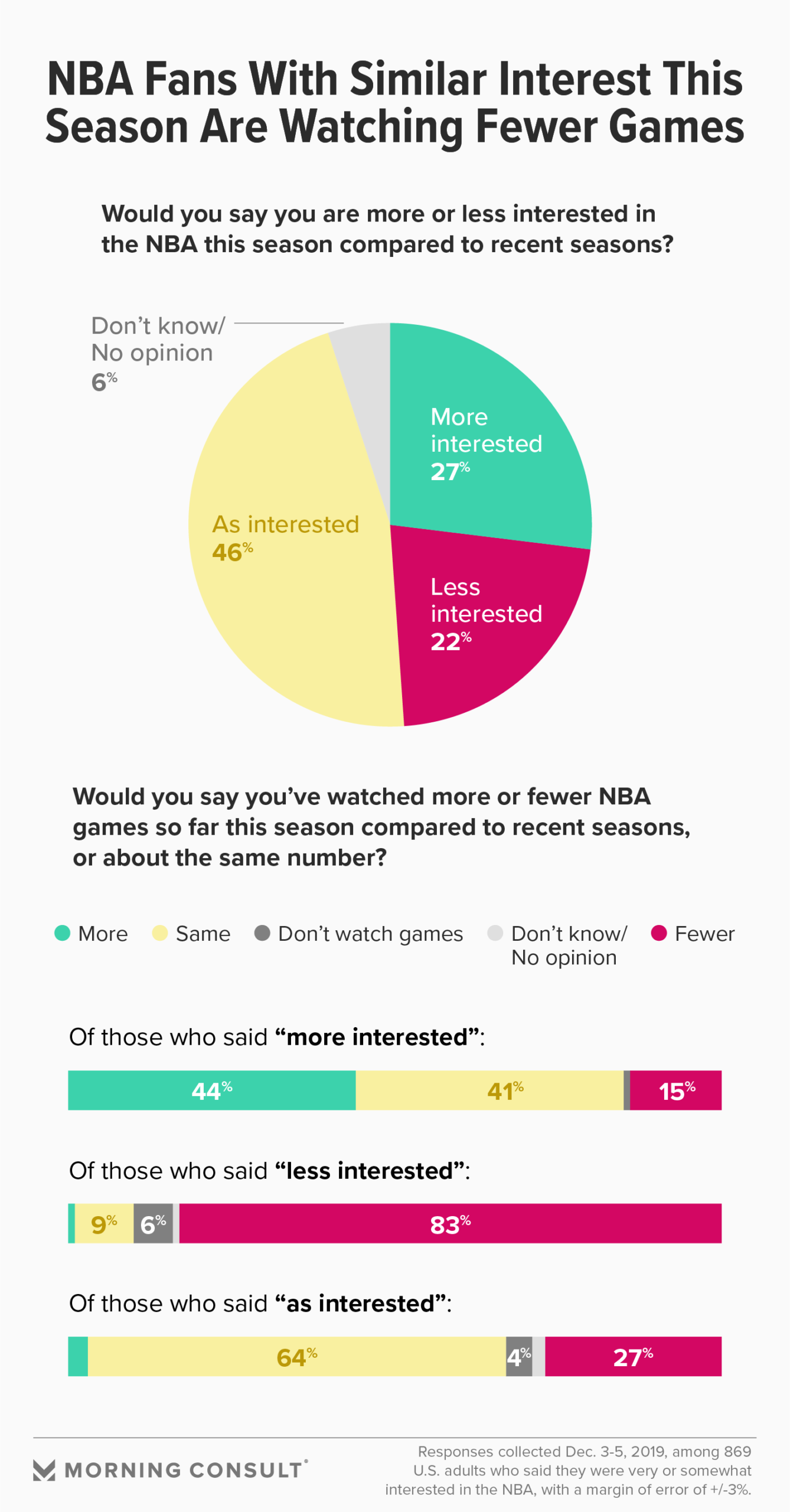 Among all NBA fans surveyed, 35 percent said they were watching fewer games this season.

One commonly cited reason for this year’s ratings decline has been injuries to star players. New Orleans Pelicans forward Zion Williamson, for example, was expected to be a major draw for broadcasters before, but has yet to play due to preseason knee surgery. Other notable absentee stars include Brooklyn Nets forward Kevin Durant and Golden State Warriors guards Steph Curry and Klay Thompson.

Both networks scheduled multiple Pelicans games early in the season to capitalize on Williamson’s debut, which has yet to occur. ESPN has also aired four Warriors games so far this season, which have suffered due to the absence of Curry and Thompson and the team’s last-place performance.

ESPN and TNT expect to get a lift from Lakers games going forward, as the networks have a combined 21 remaining on their schedules. Open-ended responses from fans surveyed indicated the Lakers, led by LeBron James, are the league’s most exciting team this season.

The national numbers on ESPN, TNT and NBA TV don’t take into account in-market viewership for teams’ games on regional sports networks, which Sports Business Journal reported is down a less severe 7 percent. That doesn’t factor in Nuggets games on Altitude Sports and Entertainment, which remains dark on Comcast and Dish after recently reaching a deal with AT&T Inc.

Asked about the ratings decreases at last week’s Dealmakers in Sports conference, NBA Commissioner Adam Silver cited Nielsen data saying that overall cable viewership has decreased by 20 percent over the past four years and nearly 50 percent among adults ages 18 to 34, a key demographic for the league.

“For the NBA, which is primarily a cable/satellite sport, that system is broken to a certain extent,” Silver said. “Not just in terms of the loss of homes, but our young viewers in particular are tuning out traditional cable.”