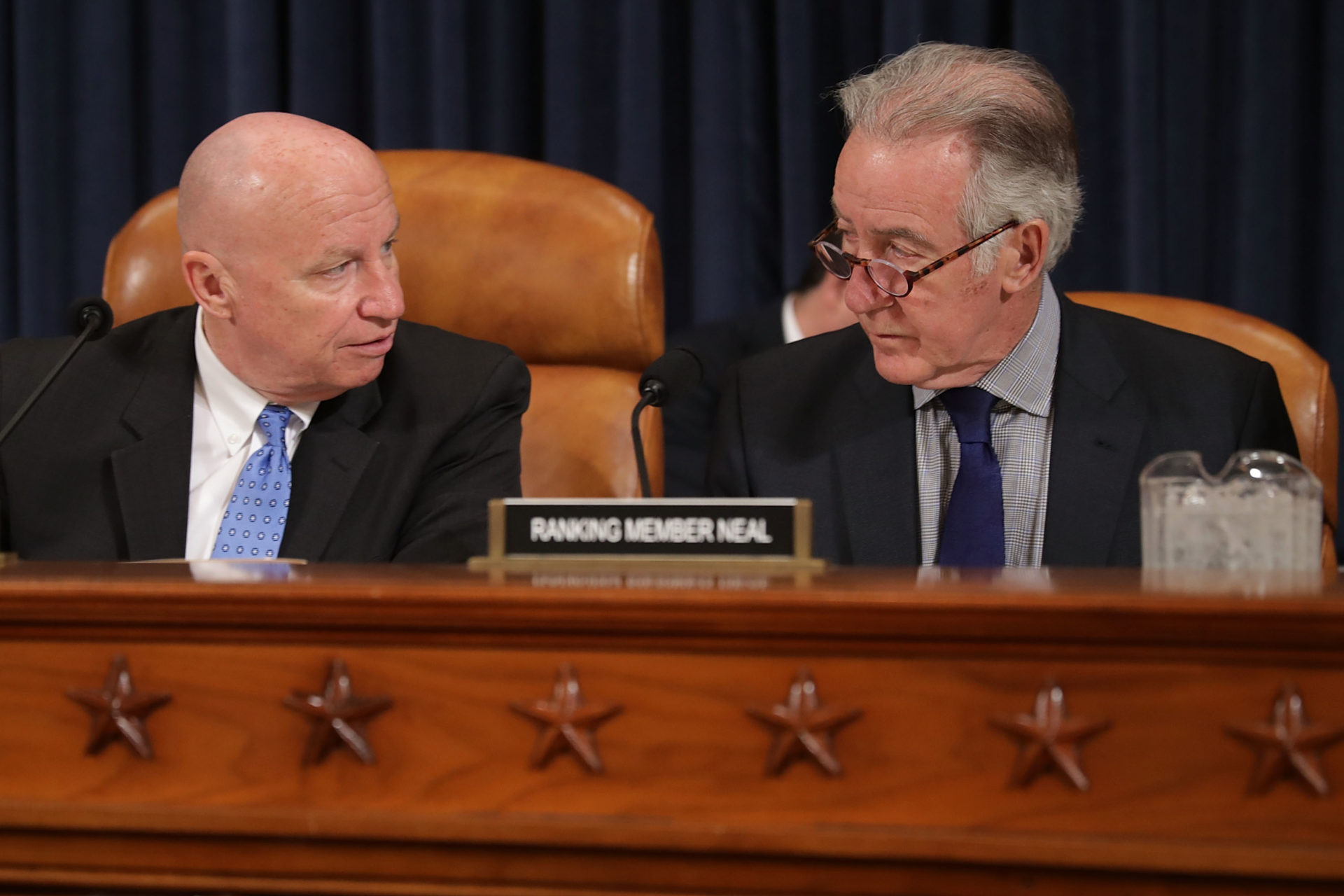 The year-end government funding package that Congress must pass by Friday is not expected to include bipartisan legislation protecting patients who receive surprise medical bills sent by out-of-network specialists at in-network facilities — a practice that, if amended, could reduce health spending for people with private insurance by up to $40 billion annually, according to a new study published in Health Affairs.

Though much of the literature on surprise billing focuses on emergency room physicians, the new analysis of data from a large commercial insurer in 2015 takes a look at four practitioner groups that similarly don’t experience changes in demand with price variation: anesthesiologists, pathologists, radiologists and assistant surgeons.

While hospital groups argue surprise bills are a consequence of so-called “narrow networks,” researchers have pointed to the ability of hospitals to employ physicians that charge out-of-network rates even when the facility is in-network for patients. Consequently, charges from physicians in these specialties can vastly exceed both Medicare rates and payments for in-network physicians.

Zack Cooper, an economist at Yale and lead author of the study, said the goal of the research was to find out “how often are we seeing this outside of the emergency room in other specialties that are also really common, like anesthesiology or radiology?”

The researchers analyzed roughly 4 million insurance claims involving anesthesia, pathology, radiology and assistant surgeon services and created a distribution of hospitals based on the rate of out-of-network billing — and found that cases of surprise bills are highly concentrated within a minority of hospitals. 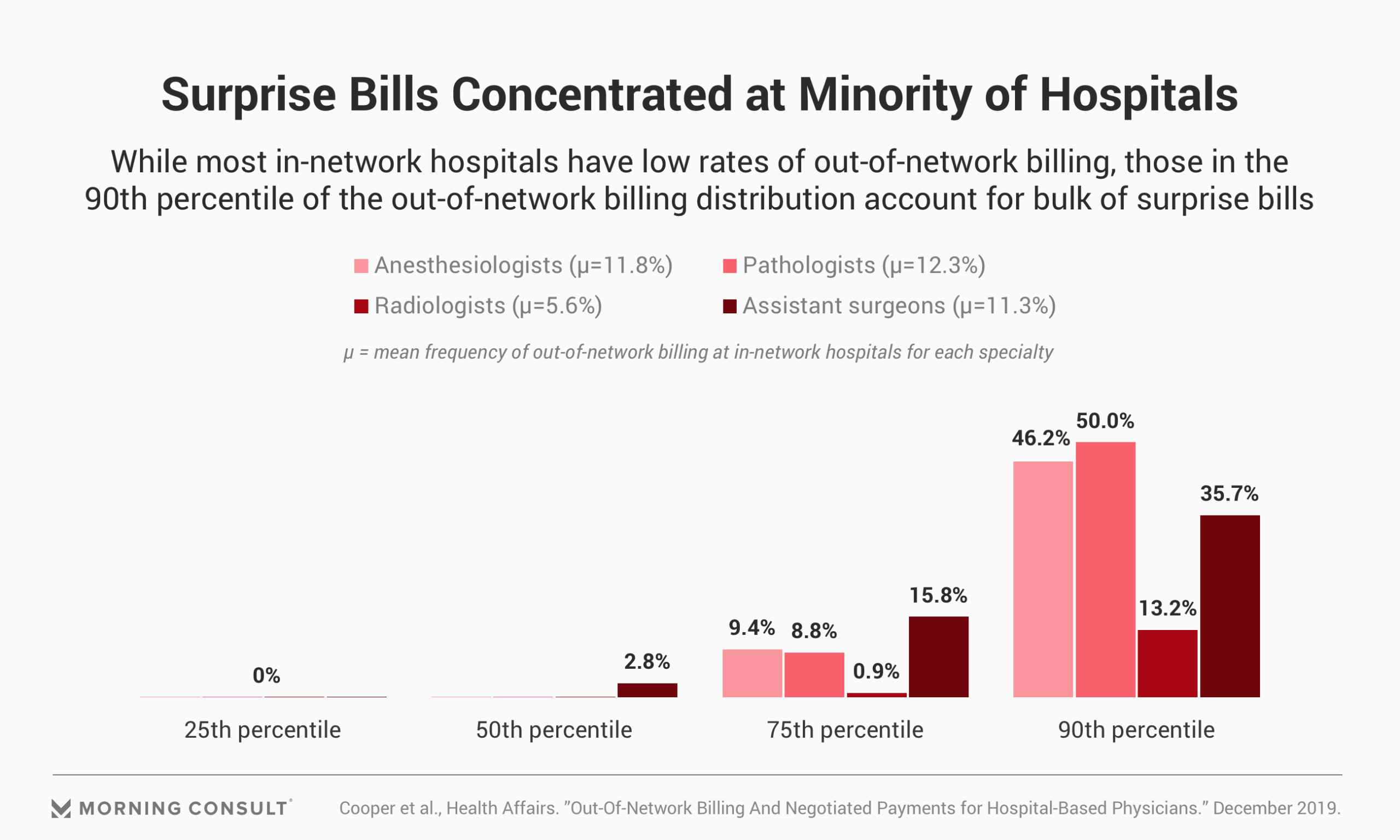 In anesthesiology, 11.8 percent of cases on average involved care from a provider who was not in-network. But at hospitals in the 90th percentile of the distribution, roughly 46 percent of patients received care from an out-of-network anesthesiologist. Similarly in pathology, 1 in 2 patients at hospitals in the 90th percentile were served by an out-of-network pathologist, compared to an overall average of 12.3 percent.

To calculate the burden of out-of-network bills from these specialists on total health care spending, the researchers used payments for orthopedists as a point of comparison. Orthopedists are among the most well-paid doctors in the United States, Cooper said, but don’t have the ability to bill out-of-network without the risk of losing patients. If in-network payments for these four groups of practitioners were reduced to 164 percent of Medicare rates — equivalent to orthopedic surgeons — total spending for people with insurance through their employer could fall by 3.4 percent.

Surprise billing surfaced as a major priority for lawmakers in both parties and the Trump administration in 2019, and while much of the conversation has rightfully focused on the personal stories of families subject to egregious medical bills, Cooper emphasized that all consumers are affected by the ability of some specialists to remain out of network. The negotiating power of such practitioners can drive in-network rates up and, in turn, push health plans to raise their premiums.

Though lawmakers appeared poised last week to weave a bipartisan surprise billing fix into the year-end spending package, the introduction of a new bill by Reps. Richard Neal (D-Mass.) and Kevin Brady (R-Texas), proposing to leave the payment decision to an outside arbiter, appears to have derailed the possibility of any action before the new year.

The American College of Emergency Physicians, a group that has pushed back against rate-setting — proposed in the deal from leaders of the House Energy and Commerce Committee and Senate Health, Education, Labor and Pensions Committee — maintains that an independent dispute resolution model is the most effective solution. At a June hearing, the American Hospital Association’s executive vice president, Tom Nickels, said requiring hospitals to sell a package of facility and physician services — as the researchers suggest — allows “insurers to transfer to hospitals their responsibility for establishing comprehensive physician networks and managing the associated financial risk” and wouldn’t protect patients from surprise bills.

The failure to act on surprise billing is less about complexity than “an example of the pernicious effect that lobbying has on our health system and our public policy,” Cooper said. Provider- and payer-side lobbyists, as well as groups funded by physician-staffing companies, have poured millions of dollars into efforts to stymie legislation they view as perilous for their business.

“The sad part is, all the people talking about this, and all people lobbying, and all the people deciding, are broadly unaffected by this — in so much as a $500 bill is annoying, but not financially crippling,” Cooper said. “Whereas, frankly, the people we’re trying to help — the people who don’t get a seat at the table, whose voices don’t get heard — are the ones who are getting affected.”