Most People Say They Stuck to Their 2019 Resolutions. Or So They Think

61% who made a resolution have kept it, but the share who said they made one has shrunk over time

It’s nearly the end of 2019, and new polling shows that either most of the country’s adults have kept their resolutions — or many have short, or selective, memories. 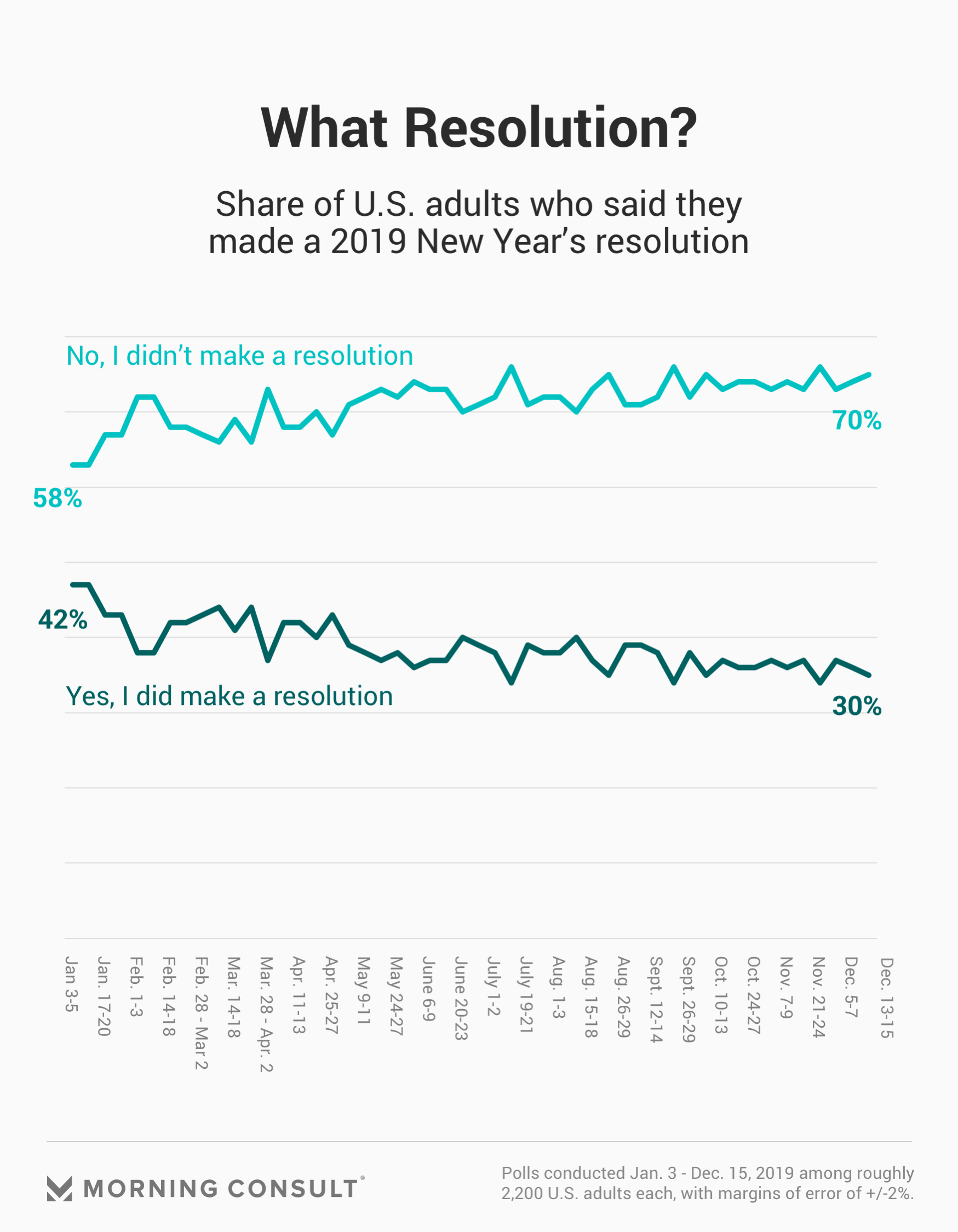 Sixty-one percent of U.S. adults who said they made a resolution have kept it, according to weekly polling conducted by Morning Consult beginning on Jan. 3, a figure that’s largely stayed the same since late May.

The findings push back on persistent and pessimistic media reports detailing that 80 percent of the country habitually break their new year resolutions by February.

Many studies that investigate New Year’s resolutions are longitudinal, which re-contact the same group of individuals. Morning Consult’s polls, on the other hand, use a cross-lagged panel model, reaching a new group of roughly 2,200 U.S. adults each week.

Notably, the share of respondents who said they’ve made a resolution moved throughout the year: It’s dropped 12 points from 42 percent in the first poll to 30 percent in the latest survey, conducted Dec. 13-15. (Download the full data set here.)

One explanation that psychologists and researchers offered is quite simple: “A lot of people who start a resolution and fail will probably retroactively say they never made one,” said Elliot Berkman, an associate professor of psychology at the University of Oregon, whose research seeks to understand how psychology and neuroscience can inform interventions to improve goal outcomes. 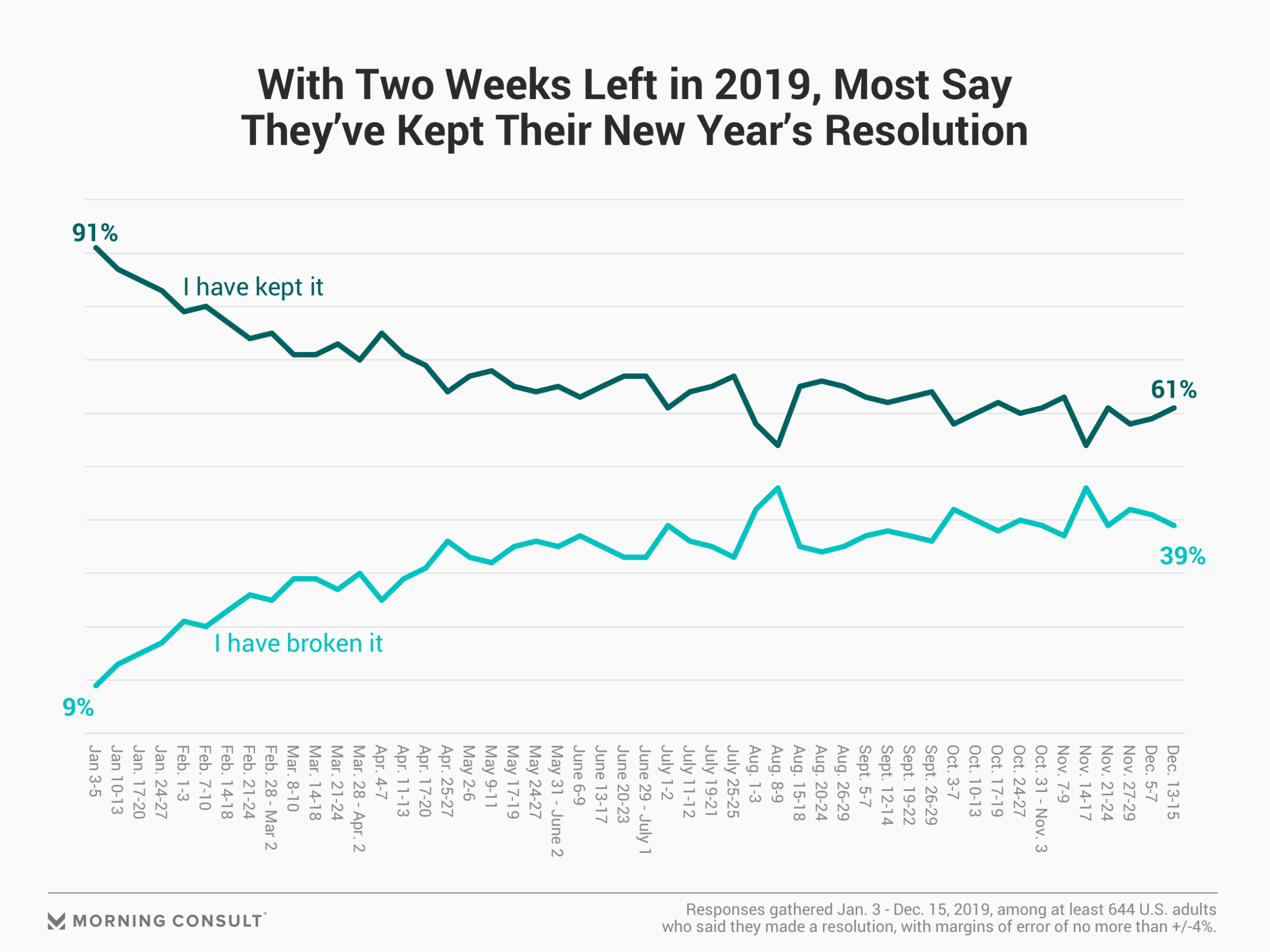 John C. Norcross, a distinguished professor of psychology at the University of Scranton in Pennsylvania, said respondents are reacting to pressure, whether internally or externally, to be the best version of themselves.

“We like to feel good about ourselves, so we kind of forget that we took a resolution and therefore don’t have to admit that we failed,” said Norcross, who is also the author of “Changeology: 5 Steps to Realizing Your Goals and Resolutions.” Norcross, who has conducted longitudinal studies on New Year’s resolutions, noted the Morning Consult study is the only cross-sectional study on the topic that he knows of that extends an entire year.

Related: 2018 Was the Best of Times or the Worst of Times — Depending on Your Party

Another more deliberate phenomenon could be happening here as well, he said, pointing to data collected by the American National Election Studies. The organization’s Time Series Studies tracked a dwindling share of people who said they had voted for former President Richard Nixon after he left office: from 50 percent in 1960, to 43.4 percent in 1962, to 35.9 percent in 1964.

Norcross also said genuine memory loss could be behind the decline in the share of people who said they never made a New Year’s resolution. Ask individuals about a decision they made eight, nine, 10 months ago, and they’re likely to simply not remember. 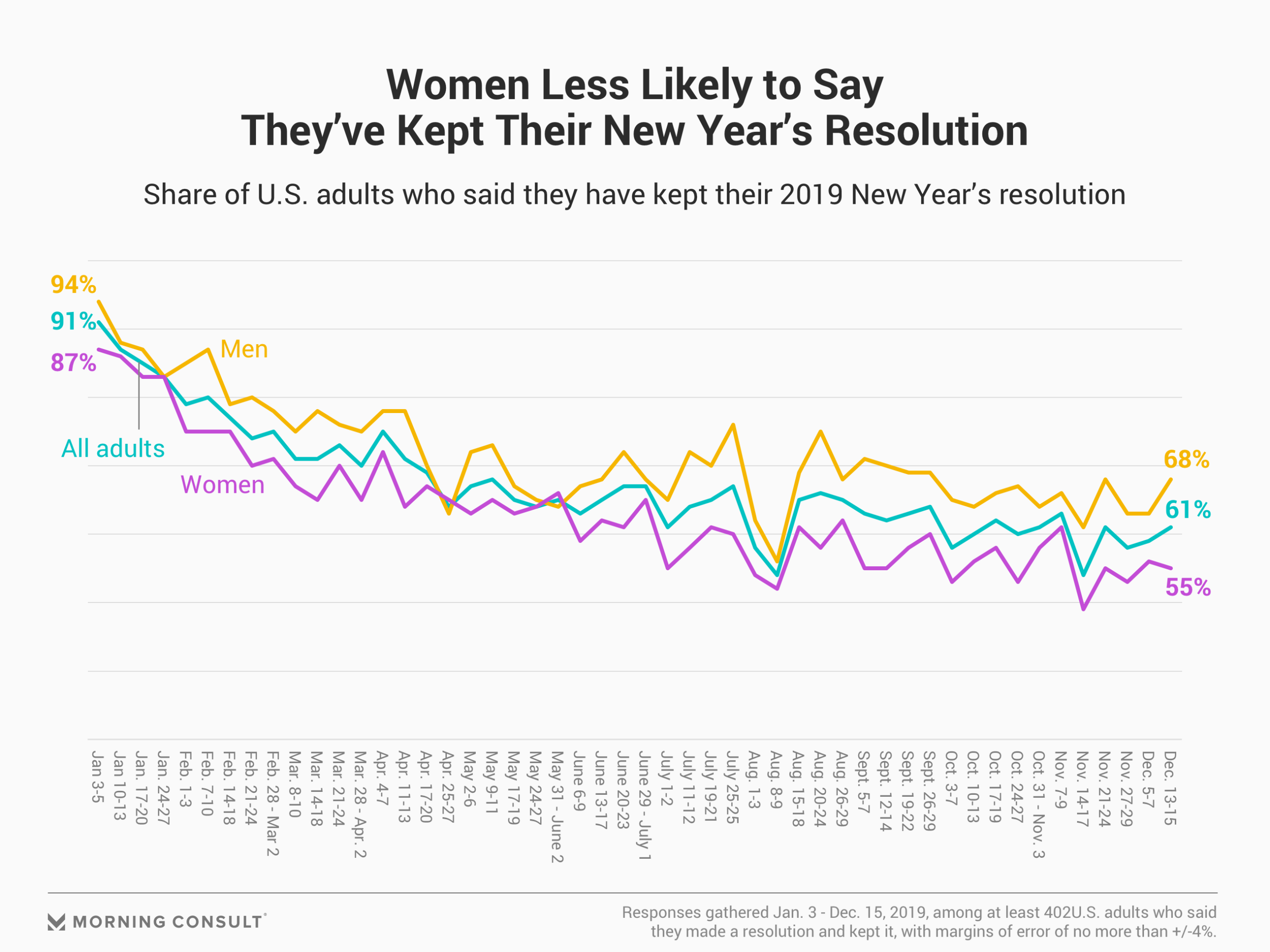 The respondents’ gender played a role in whether New Year’s resolutions were upheld. Women were more likely than men to own up to breaking their resolution, but that’s not because women tend to be more honest. They were just as likely as men to say they had made a resolution in the initial poll, and the decline of the share of people who said they had made a resolution in the first place was about the same regardless of gender.

The gender difference here lies in the type of resolution women tend to make, Norcross and others said. Women are more likely to make quantitative resolutions that deal with weight loss — losing 10 pounds before the summer or going to the gym every day, for example — and are thus are more easily able to identify when they have broken their resolution.