Congress has failed to produce a bipartisan bill in 2019 so far, despite lengthy negotiations

According to a recent Morning Consult survey, 64 percent of registered voters hold companies most responsible for protecting users' online data.
By Sam Sabin

As lawmakers continue to hash out the details of a federal bill to regulate how companies collect, store and sell users’ personal data, a strong majority of registered voters say that crafting privacy legislation should still be a congressional priority in 2020.

In a Morning Consult poll conducted Dec. 14-16, 2019, 79 percent of registered voters — including 83 percent of Democrats and 82 percent of Republicans — said that Congress should make crafting a bill to better protect consumers’ online data an important or top priority. That’s virtually unchanged from a survey in November 2018, the last time this question was asked, when 78 percent said it should be a priority for Congress following the midterm elections.

The poll of 1,991 registered voters has a margin of error of 2 percentage points. 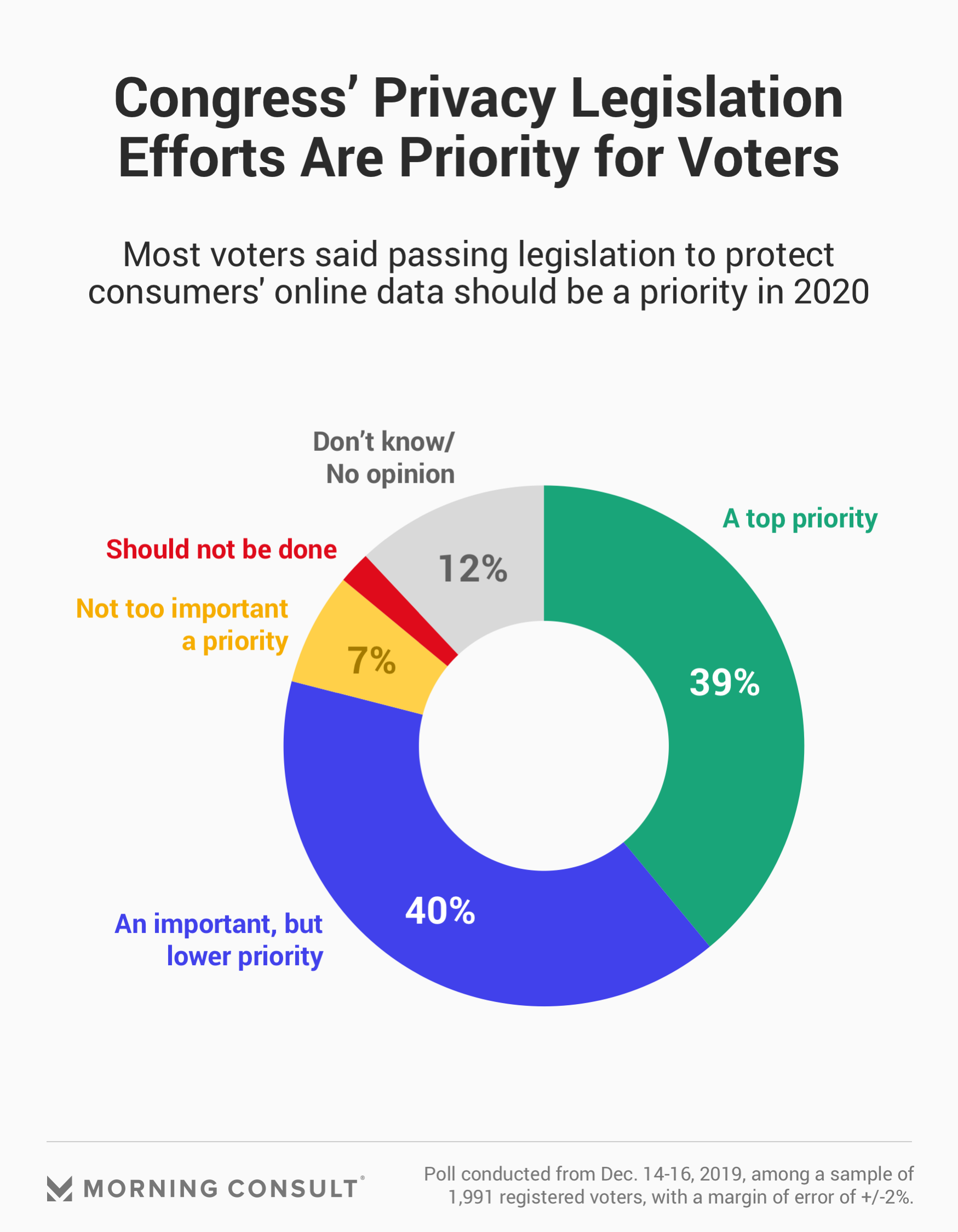 Lawmakers in both the Senate and House of Representatives have gone back and forth all year regarding the criteria for a federal privacy bill that would change the way companies handle data they collect from users — such as shopping history, geolocation and internet browsing history. And while Congress was optimistic it would have a federal bill passed by the end of 2019, the first peek at deliberations on privacy legislation didn’t come until late November, when Senate Commerce Committee ranking member Maria Cantwell (D-Wash.) introduced the Consumer Online Privacy Rights Act (S. 2968).

The same week, Senate Commerce Committee Chairman Roger Wicker (R-Miss.) circulated his own draft measure. On the House side, Rep. Jan Schakowsky (D-Ill.), who chairs the House Energy and Commerce Committee’s consumer protection subcommittee, told reporters she expected to unveil her own draft bill as early as this week.

These negotiations come amid the looming prospect of the California Consumer Protection Act, a landmark state privacy bill set to go into effect Jan. 1, and as a handful of other states, including Washington, seek to pass similar frameworks. 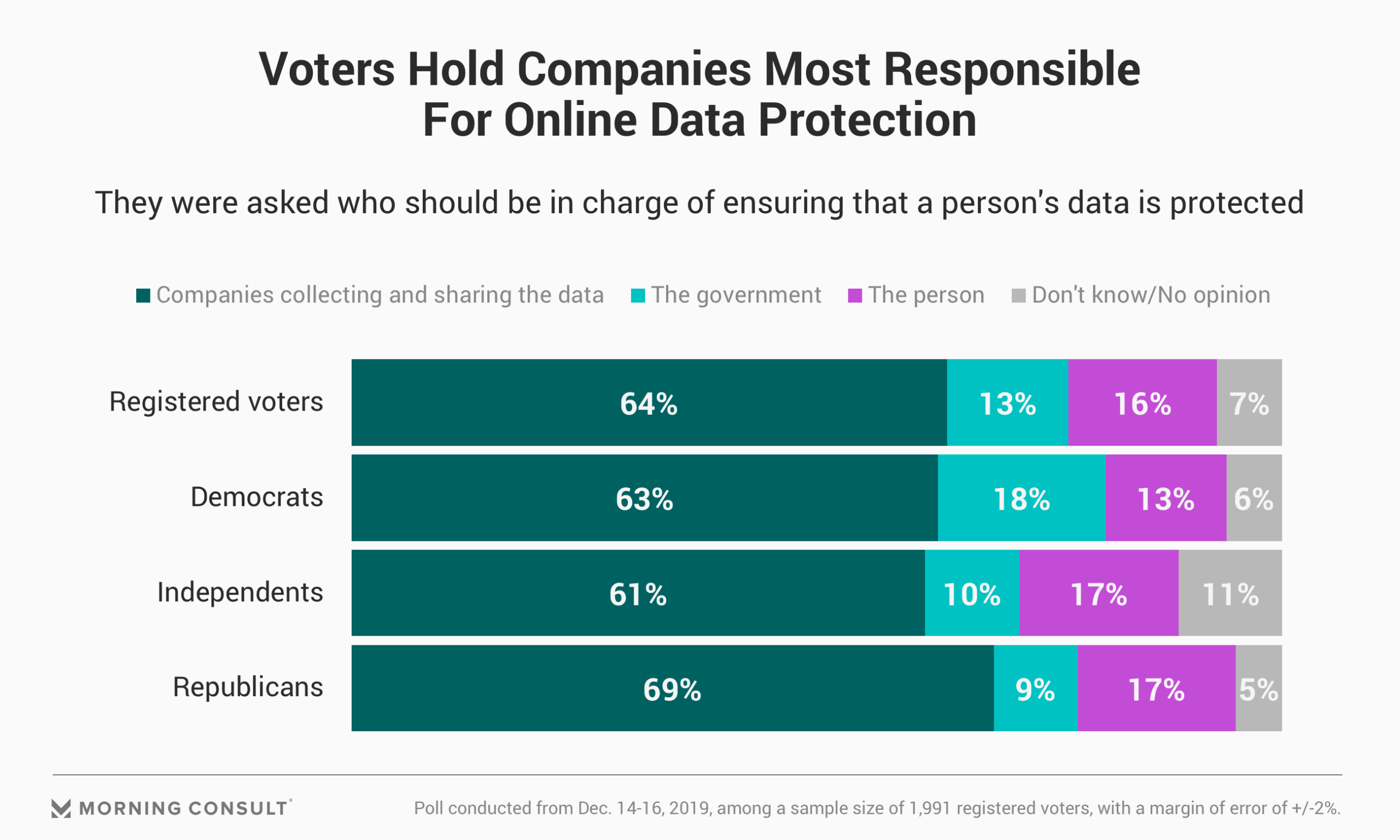 Survey respondents, presented with five government entities, were most likely to say that federal agencies were “very responsible” for regulating how companies collect, store and share personal information, with 55 percent saying so. However, there wasn’t a clear favorite among voters: Fifty percent said state governments were very responsible, and 49 percent and 48 percent said the same about the respective responsibilities of the courts and Congress — suggesting that voters see privacy regulation as a coordinated effort.

But overall, 64 percent of all voters said the companies collecting and sharing users’ information are most responsible for ensuring that a person’s data is protected online, compared to 13 percent who said the same for the government and 16 percent who said it was chiefly the individual’s responsibility.

While it’s predicted that few federal legislative items will move in 2020 because of ongoing impeachment proceedings and the U.S. presidential election, Carl Szabo, vice president and general counsel of industry group NetChoice, said he expects the election to “help move this forward” anyway.

“Once everyone realizes the unconstitutional nature of a lot of these state privacy laws, and the conflicts between them, lawmakers are going to run on a platform that provides consistent privacy protections for all Americans,” said Szabo, whose group advocates for the pre-emption of state laws.

Szabo also predicts someone filing a preliminary injunction that would prevent the CCPA from being enacted Jan. 1, which would “spur congressional activity,” leaving Congress with a clean slate to determine privacy protections.

Sixty-five percent of voters said that data privacy is “one of the biggest issues our society faces” and that more legislation is needed to prevent future data breaches, while 22 percent said the occasional data breach is “just something we’re going to have to accept” in an increasingly digital society.

Chris Calabrese, the interim co-chief executive and vice president for policy at the Center for Democracy and Technology, said he expects to at least see some bills marked up in the House and Senate in 2020, as well as continued state moves. Specifically, Calabrese is watching lawmakers in California, Washington state and New York to see how their discussions about either amending or crafting their own privacy measures play out.

“The states are going to continue to push,” Calabrese said, “and I don’t think the pressure on Congress to push some kind of comprehensive privacy reform is going away anytime soon.”