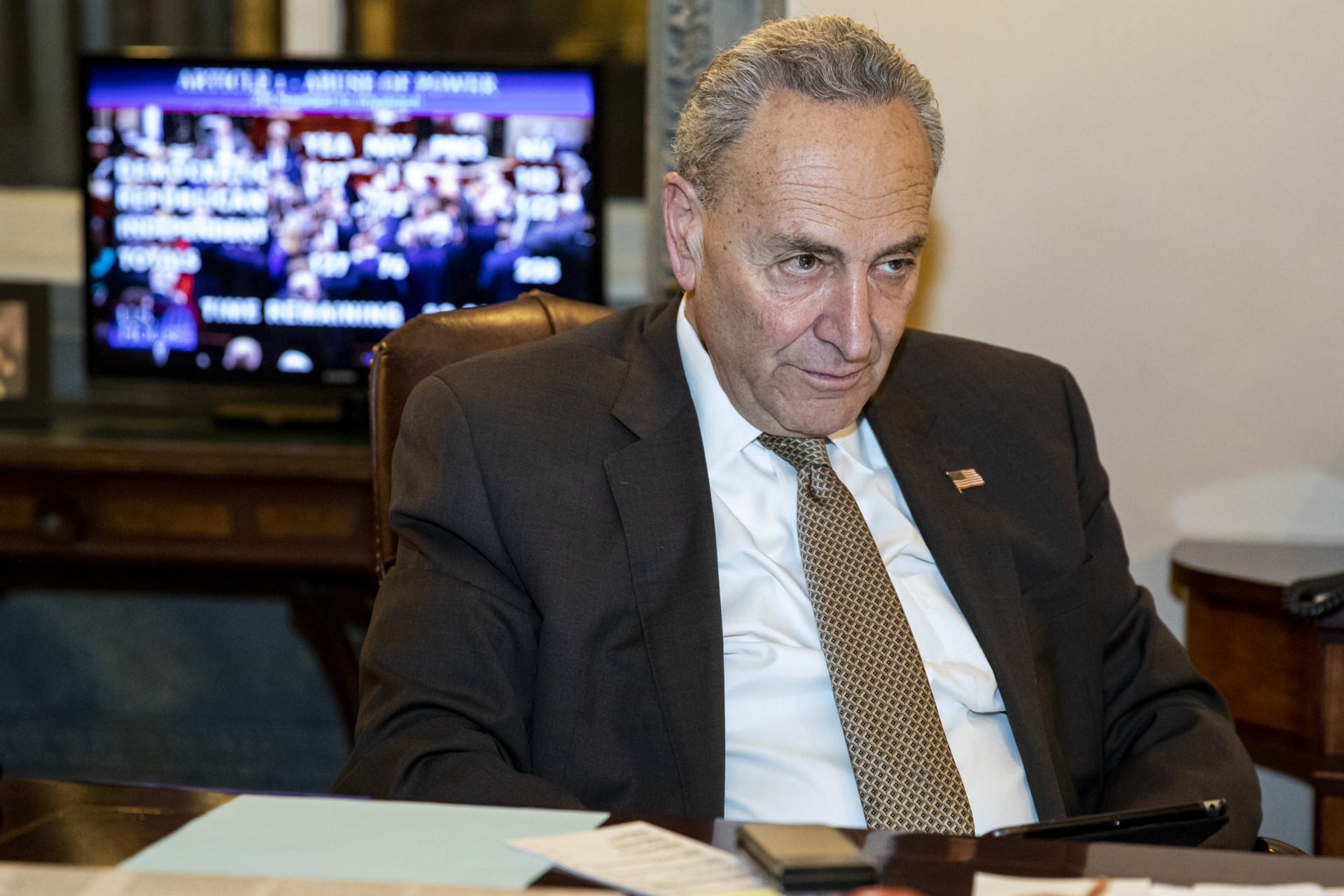 Senate Minority Leader Chuck Schumer (D-N.Y.) watches the House vote to impeach President Donald Trump on Dec. 18 in his office. A new poll finds most voters appear to side with Schumer's view that the Senate should call additional witnesses for Trump's trial. (Samuel Corum/Getty Images)
By Eli Yokley

The lion’s share of voters still back the Senate removing President Donald Trump from office, but as the chamber’s leaders begin negotiations over the terms of the trial, most also want to hear from more witnesses, according to the latest Morning Consult/Politico poll, the first survey of registered voters conducted entirely after the House’s impeachment vote on Wednesday.

The Dec. 19-20 poll found overall support for Trump’s removal was largely unchanged since before the House’s vote, with 51 percent of voters approving of the move and 42 percent disapproving. Roughly the same share of voters approve (52 percent) and disapprove (43 percent) of Trump’s impeachment in the House, numbers that were statistically unchanged from a Dec. 14-15 poll.

The new survey, which has a margin of error of 3 percentage points, also found most voters appear to be siding with Senate Minority Leader Chuck Schumer (D-N.Y.), who has called on Senate Majority Leader Mitch McConnell (R-Ky.) to allow the chamber to issue subpoenas for four current and former Trump administration officials who did not appear when they were asked to testify during the House’s impeachment inquiry. 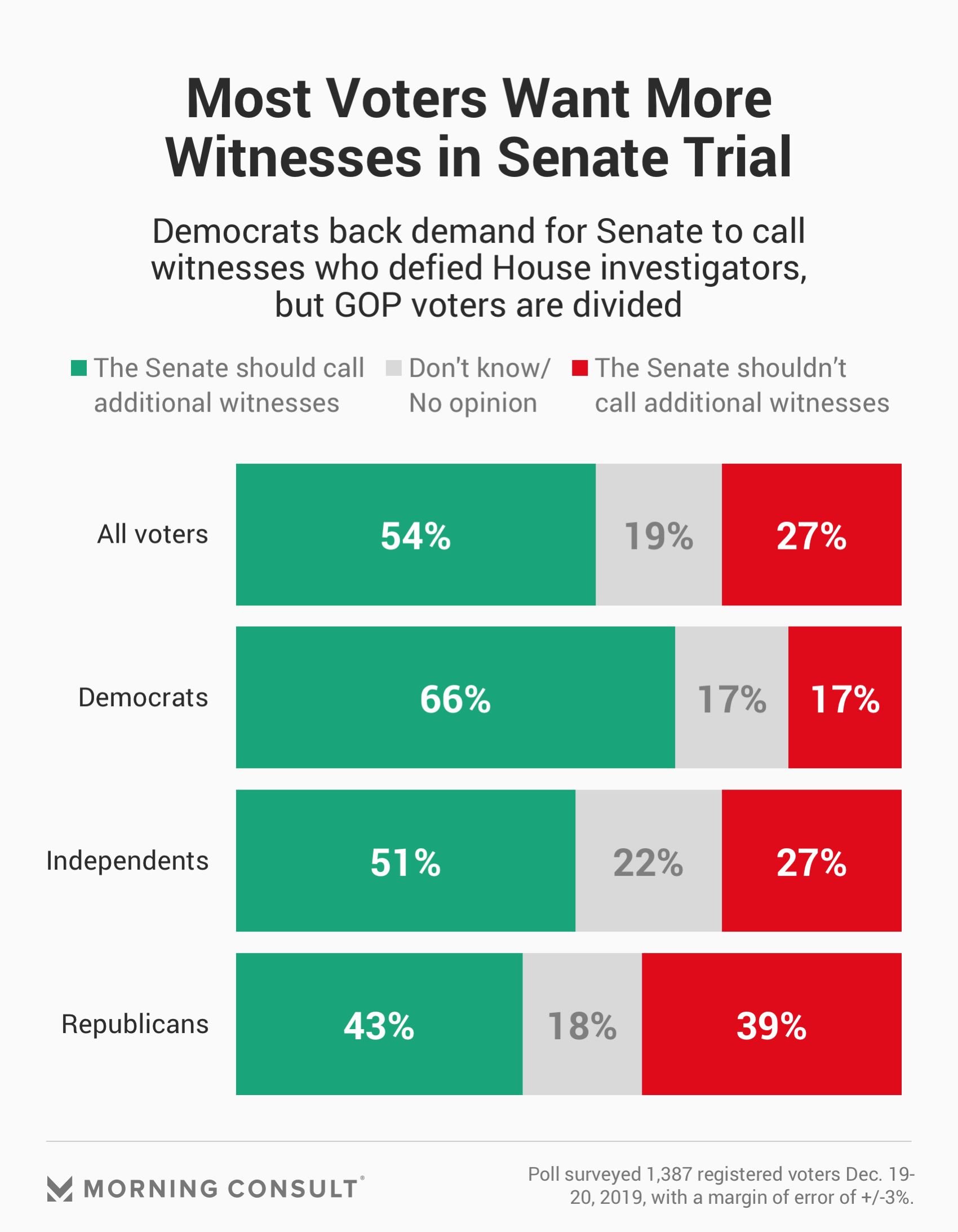 Fifty-four percent of voters said the Senate should call additional witnesses, while 27 percent said that was unnecessary because the relevant testimony and evidence has already been revealed. Most Democrats and about half of independents want more testimony, while GOP voters are split.

Senate Republican leaders have pressed for a speedy trial to acquit Trump and are not in favor of allowing the Democrats’ witnesses to testify. But the president reportedly wants to hear from more witnesses, such as Hunter Biden, former Vice President Joe Biden’s son whose work in Ukraine was at the center of Trump’s interest in investigations by the country, and House Intelligence Committee Chairman Adam Schiff (D-Calif.), who led the House impeachment inquiry.

Fifty-two percent of voters said they believe Trump’s dealings with Ukraine represent an abuse of power to influence the 2020 election, compared with 38 percent who said he was acting within his power as president. But when it comes to who is responsible for holding Trump accountable, the public is divided: Forty-one percent said voters should, while 43 percent said Congress.

Trump’s impeachment was a high-penetrating event among voters, with 58 percent saying they had seen, read or heard “a lot” about it. That salience matches the share measured for the mass shooting in El Paso, Texas, and financier Jeffrey Epstein’s death at the time in August. The House vote only trails Hurricane Dorian and Trump’s national emergency, the events that broke through the most this year.