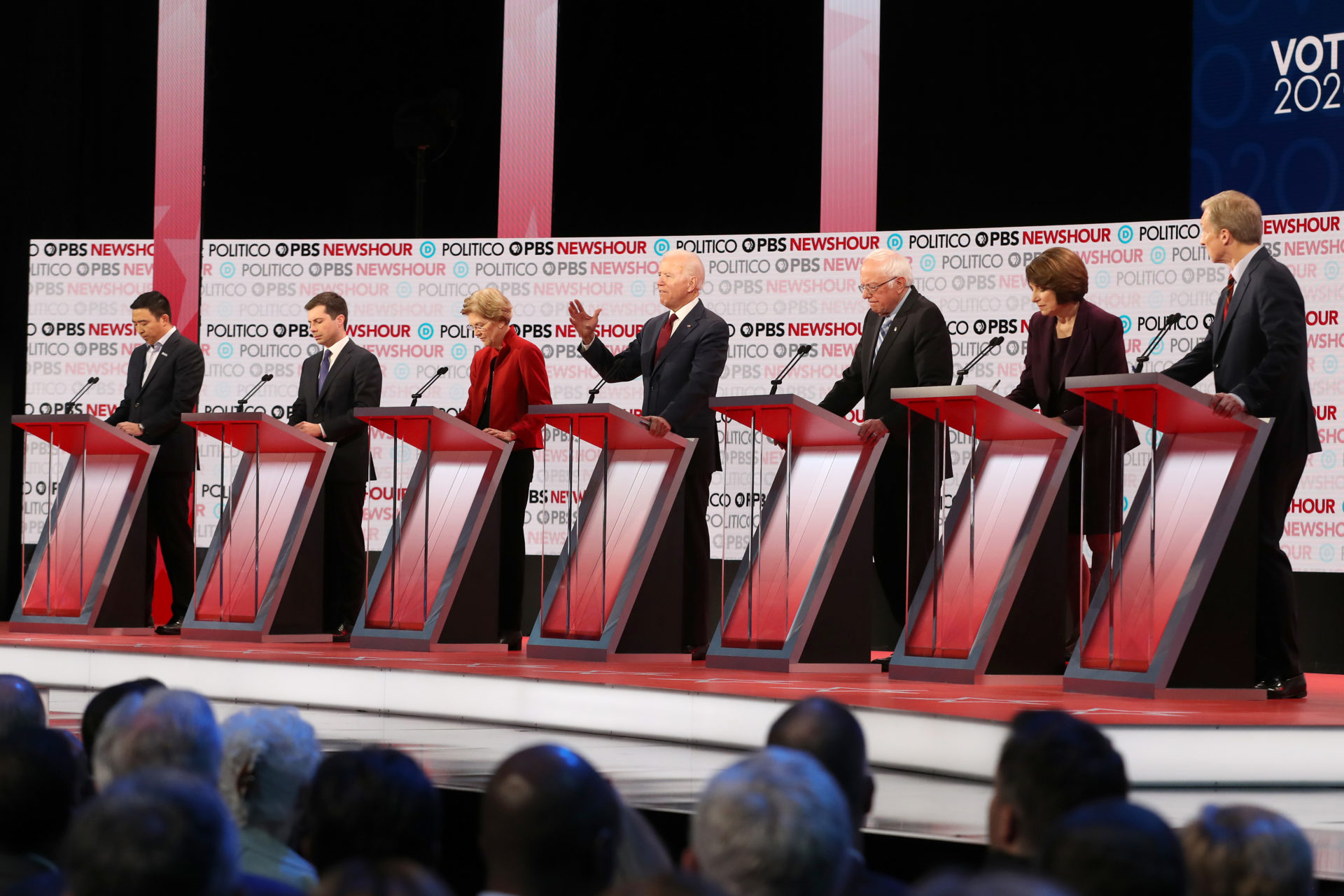 Democratic presidential candidates at the most recent debate in Los Angeles on Dec. 19. Morning Consult's most-read stories of 2019 included coverage of the candidates' 2020 prospects and voters' views of the impeachment of President Donald Trump. (Justin Sullivan/Getty Images)
By Matt Bracken

When it came to the most popular stories Morning Consult published in 2019, most roads led to 2020.

Our Washington vertical was dominated this year by polling stories on the Democratic primary race and the specter of impeachment hanging over Donald Trump’s presidency. In the tech world, pieces on social media’s unyielding influence in politics were especially resonant, while political coverage via traditional media companies — especially cable news networks — were the most clicked-on pieces from our brands beat.

Policy coverage was no different. The “Medicare For All” question that has played out during every Democratic primary debate was a hot topic of conversation among readers of our health care coverage. In finance, economic inequality was the main throughline shaping stories on proposed wealth taxes and how young Americans are making financial decisions. And in energy, the role of nuclear in meeting carbon-free emissions goals was of particular interest to our readership.

Entertainment, meanwhile, chronicled everything from the latest twists and turns in the streaming wars to bloody predictions about the end of “Game of Thrones,” while our sports vertical out-kicked the coverage on a major soccer story and attempted to settle the age-old debate on whether or not axe throwing is a sport.

Here’s a look at the top five most-read stories on each of Morning Consult’s eight verticals:

1) Joe Biden Is the Front-Runner — Over Democrats, and Donald Trump

2) America’s Most and Least Popular Senators

1) Fox News’ Upper Hand Next Year: The Country’s Eyeballs, Down to Districts

2) Media Companies Dominate Most Divisive Brands List, and It Keeps Getting Worse

4) How Feminine Is Your Latte?

5) 2019 is nearly over. Here’s what news broke through in Morning Consult polls.

Related: Analyzing What News Voters Saw, Read or Heard in 2019

5) Path Shifts for Advanced Nuclear Legislation in the House

1) 49% of Young Viewers Would Cancel Netflix if It Loses ‘Office,’ ‘Friends,’ Disney, Marvel

2) As Late-Night Hosts Get Political, Audiences Get Divided

3) ‘Good Morning America’ Is No. 1 Morning Show Among Adults

4) Rotten Tomatoes Scores Continue to Freshen. What Does This Mean for Movies?

1) Millennials and Their Money: The Kids Are All Right

3) Manufacturing Workers Are Increasingly Pessimistic About the Economy

5) Trump Predicts Stock Market Crash in 2020 if He Loses, but History Says Otherwise

4) How the ‘Medicare for All’ Messaging Battle Can Be Won, or Lost

2) Transgender Female Athletes Face Hurdles to Acceptance With the Public

1) When It Comes to Trump’s Twitter Use, Here’s Where People Draw the Lines