Question of diversity in films not a concern for most audiences 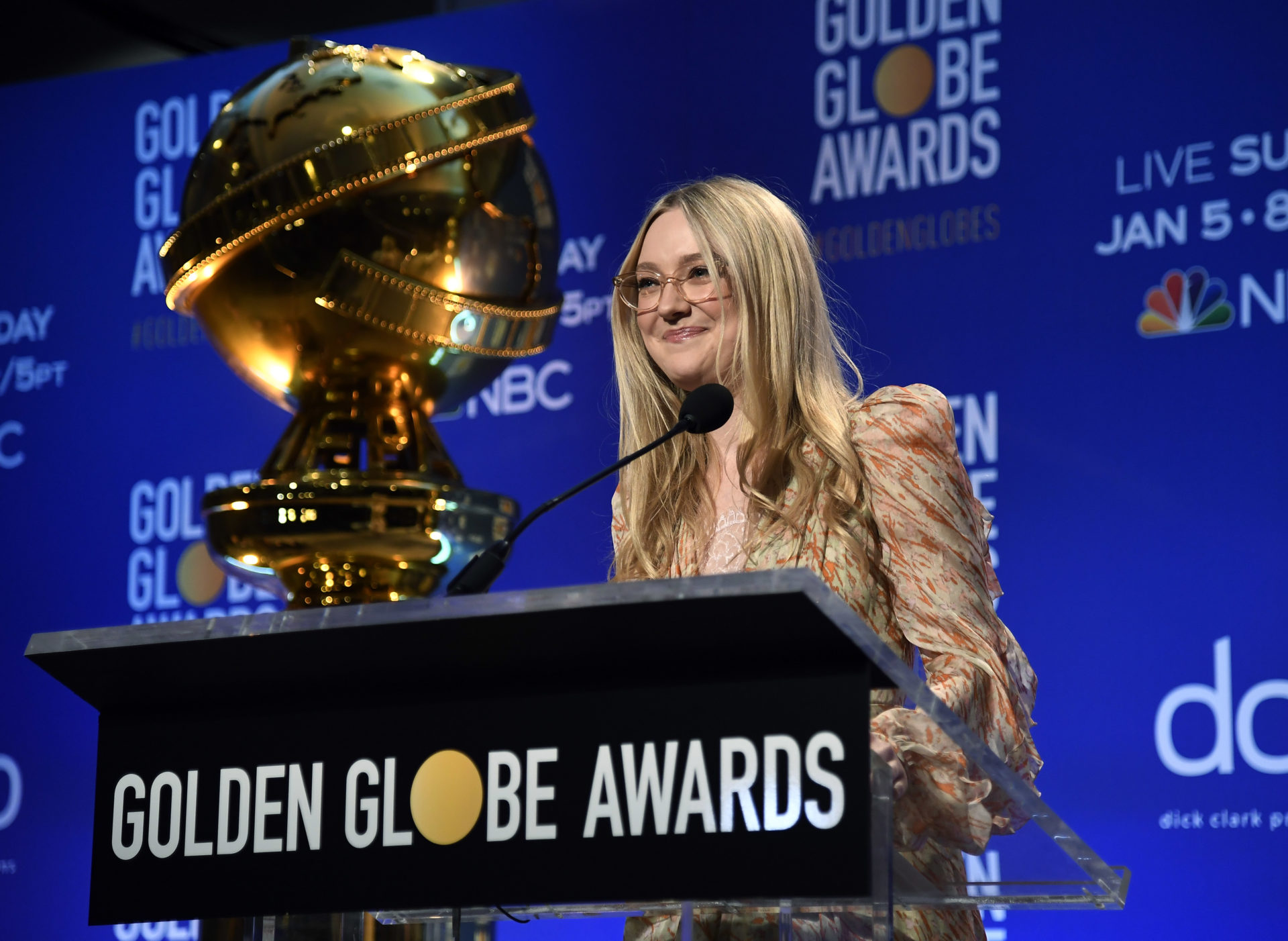 Presenter Dakota Fanning speaks at the 77th Annual Golden Globe Awards Nominations Announcement at The Beverly Hilton Hotel on Dec. 9, 2019, in Beverly Hills, Calif. Of all the best picture nominees, audiences were most likely to have seen "Joker," according to a new poll. (Photo by Kevork Djansezian/Getty Images)
By Sarah Shevenock

With the 77th Golden Globe Awards set to air this Sunday, audiences across the country are most likely to have seen “Joker” and “Rocketman,” according to new polling conducted throughout the holiday season, while smaller shares said they have seen Golden Globes contenders “Jojo Rabbit” and “Marriage Story.” And few are concerned with diversity in Hollywood, even as the Best Picture categories go another year with no female-helmed nominations.

A Dec. 26-27 Morning Consult/The Hollywood Reporter poll found that 33 percent of adults had seen “Joker” — more than any of the other nominees. The Todd Phillips-directed DC Comics origin story earned three nominations in addition to best drama picture, including best drama actor for Joaquin Phoenix and best director for Phillips. Dexter Fletcher’s Elton John biopic, “Rocketman,” came in at No. 2, with 23 percent of respondents saying they’ve seen the movie. 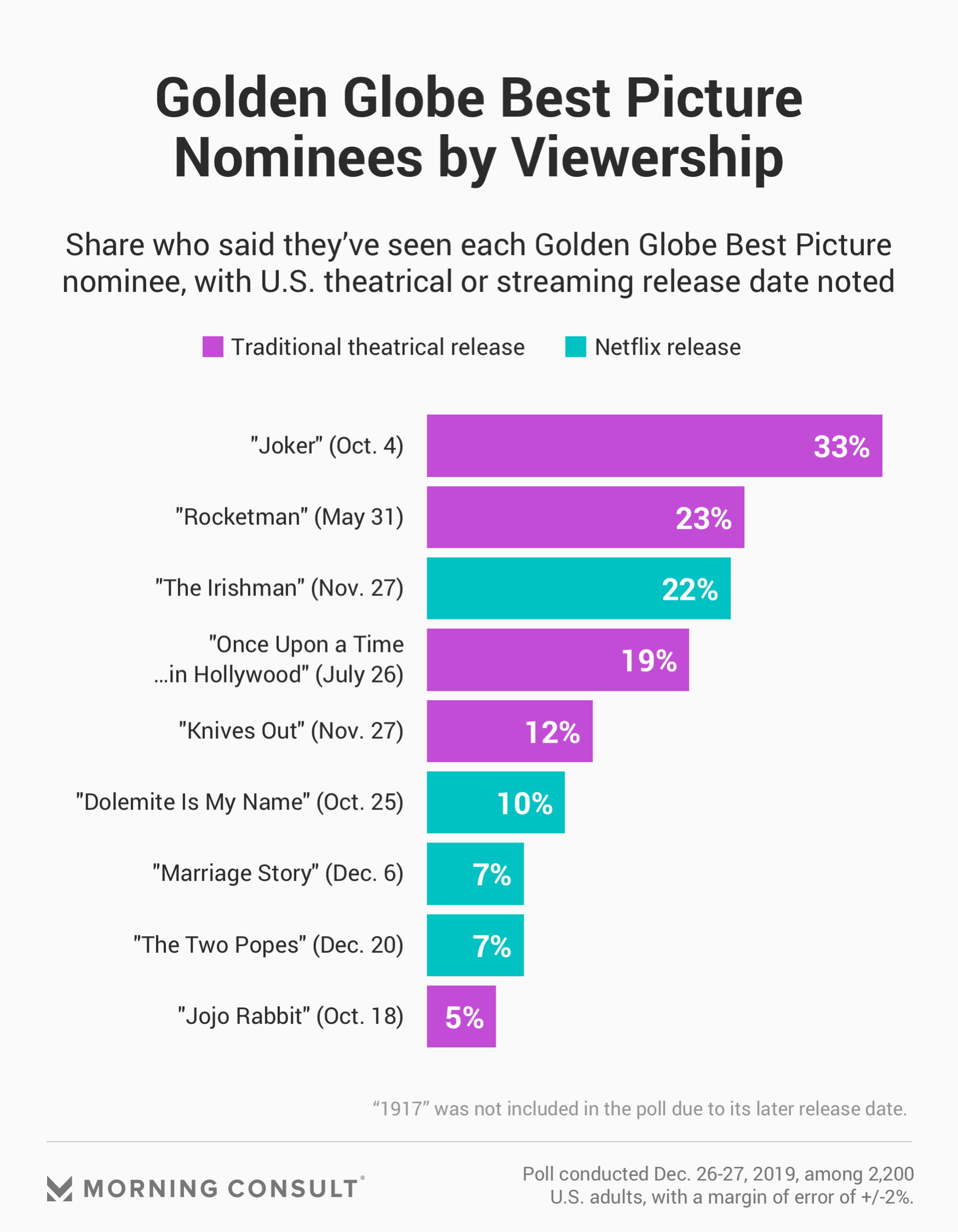 The survey, which was conducted just days after the release of Sam Mendes’ “1917,” a Globes best drama picture nominee, has a margin of error of 2 percentage points.

Four Netflix Inc. original films — “Dolemite Is My Name,” “The Irishman,” “Marriage Story” and “The Two Popes” — received nominations for best picture, with the streaming service receiving 17 total nominations on the film side. And though more than a fifth (22 percent) of the 2,200 U.S. adults polled said they had watched “The Irishman,” 10 percent said they had seen “Dolemite” while 7 percent said the same about “Marriage Story” and “The Two Popes.”

Brad Adgate, a media consultant with BIA Advisory Services, a market research firm that specializes in broadcast media, noted that Netflix’s theatrical releases have been limited, while its subscribership is not universal. And even for subscribers, Adgate said that the vast array of content on the platform limits the chance that someone will spontaneously decide to watch an original film.

“All this content has been thrown at you,” Adgate said. “But there’s still only 24 hours in a day. It’s kind of hard to digest everything that’s being produced and available to you.”

David A. Gross, a movie consultant that runs Franchise Entertainment Research Inc., said “Joker” and “Rocketman” have likely made a stronger impression on audiences because of their release dates: Rocketman opened at the end of May, while “Joker” was released in early October. The films have had more time “in people’s minds,” Gross said. He also noted that the polling for these films “parallels the box office”: “Joker” has made more than $1 billion in worldwide ticket sales, while “Rocketman” has grossed just north of $195 million, according to Box Office Mojo.

When nominations were announced Dec. 9, the Hollywood Foreign Press Association came under fire for not nominating a single woman in the best director or best screenplay categories. And while none of the films nominated for best picture in the comedy/musical or drama categories were directed by women, there are two female-helmed films in the foreign language category: “The Farewell” and “Portrait of a Lady on Fire.”

Stacy L. Smith, director of the USC Annenberg Inclusion Initiative, told Variety that “advertisers should weigh in” on the issue, calling the HFPA “out of step” and adding that “external pressure” can help initiate change.

The Annenberg Inclusion Initiative’s most recent “Inclusion in the Director’s Chair” report says that 10.6 of 2019’s 100 highest-grossing fictional films with theatrical releases in the United States had female directors, eclipsing 2018’s 3.6 percent.

And director Melina Matsoukas, whose film “Queen & Slim” received no Golden Globe nominations, told Variety that the HFPA’s voting body does not represent “the society in which we live in or the industry as it stands today.” A HFPA representative, responding to Matsoukas’ allegations that members did not watch her movie or attend screenings, said the film was in “conversation amongst the membership” and was made available for home viewing via screeners.

Forty-one percent of adults said they had heard the same amount about diversity in Hollywood compared to this time last year, per a separate Dec. 13-15, 2019, poll of 2,200 U.S. adults, while 32 percent said Hollywood has become more diverse compared to last year. That survey also has a 2-point margin of error.