A Month Ahead of Iowa Caucuses, Biden Is Democrats’ Best Bet to Beat Trump

Former Vice President Joe Biden speaks during a Jan. 3 campaign event in Independence, Iowa. Ahead of next month's caucuses, a new poll finds Biden performing better against President Donald Trump than any other Democratic candidate.(Photo by Stephen Maturen/Getty Images)
By Eli Yokley

A new Morning Consult poll, conducted Dec. 30 through Jan. 5, found Biden leads Trump 46 percent to 40 percent in a hypothetical matchup, the widest margin recorded among the top five contenders for the party’s nomination. Another 14 percent said they didn’t know or had no opinion, showing the room for movement for either candidate 10 months out from the general election.

The head-to-head matchups polled between 8,242 and 8,574 registered voters, with a 1-point margin of error. 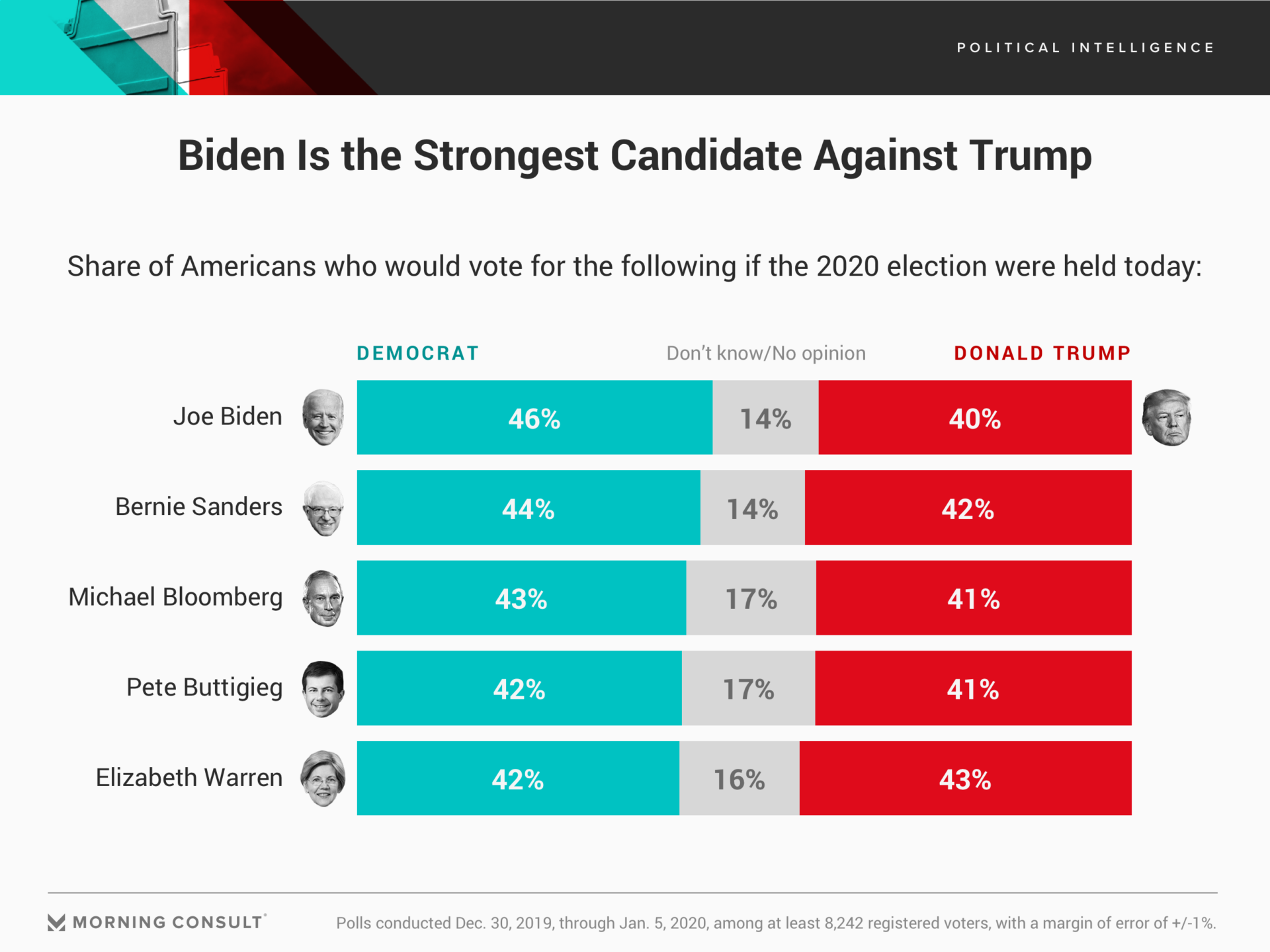 Against Trump, Biden outperforms all of the other leading contenders among white male voters, though he trails Trump by 12 points. Also, the former vice president leads Trump among middle-income Americans, 45 percent to 43 percent, the only Democratic candidate to do so.

Related: Trump Posts Best Net Approval of 2019 in Month He Was Impeached

Those advantages in the hypothetical general election polling mirror his strengths among the Democratic electorate, where he holds significant advantages over the other contenders among older black voters and suburban white women, and he statistically ties Sanders among voters who backed Trump in 2016 but indicated they’d vote in the Democratic primary or caucus in their state.

The polling also found that 6 percent of voters who said they voted for Trump in 2016 said they would vote for Biden against the incumbent Republican, compared with 5 percent who said they’d back Bloomberg over Trump and 4 percent who’d do the same for Buttigieg, Sanders and Warren.

The latest Morning Consult poll of more than 17,000 Democratic primary voters nationwide finds Biden still leading his party’s primary with 31 percent calling him their first choice. Sanders saw a 2-point bump in first-choice support, to 23 percent, while no other candidate saw movement outside the sample’s 1-point margin of error.

And at 29 percent, Biden remains the front-runner in the 14 “Super Tuesday” states collectively, which will hold nominating contests on March 3, although Sanders (25 percent) is nipping at his heels, followed by Warren at 14 percent, Buttigieg at 7 percent and 6 percent for Bloomberg, who has focused his attention and money beyond the first four states.