Kobach Says Republicans Shouldn’t Worry About Another Loss in Kansas

Even though he lost the governor's race last year, he says any Republican can win Senate race, including himself 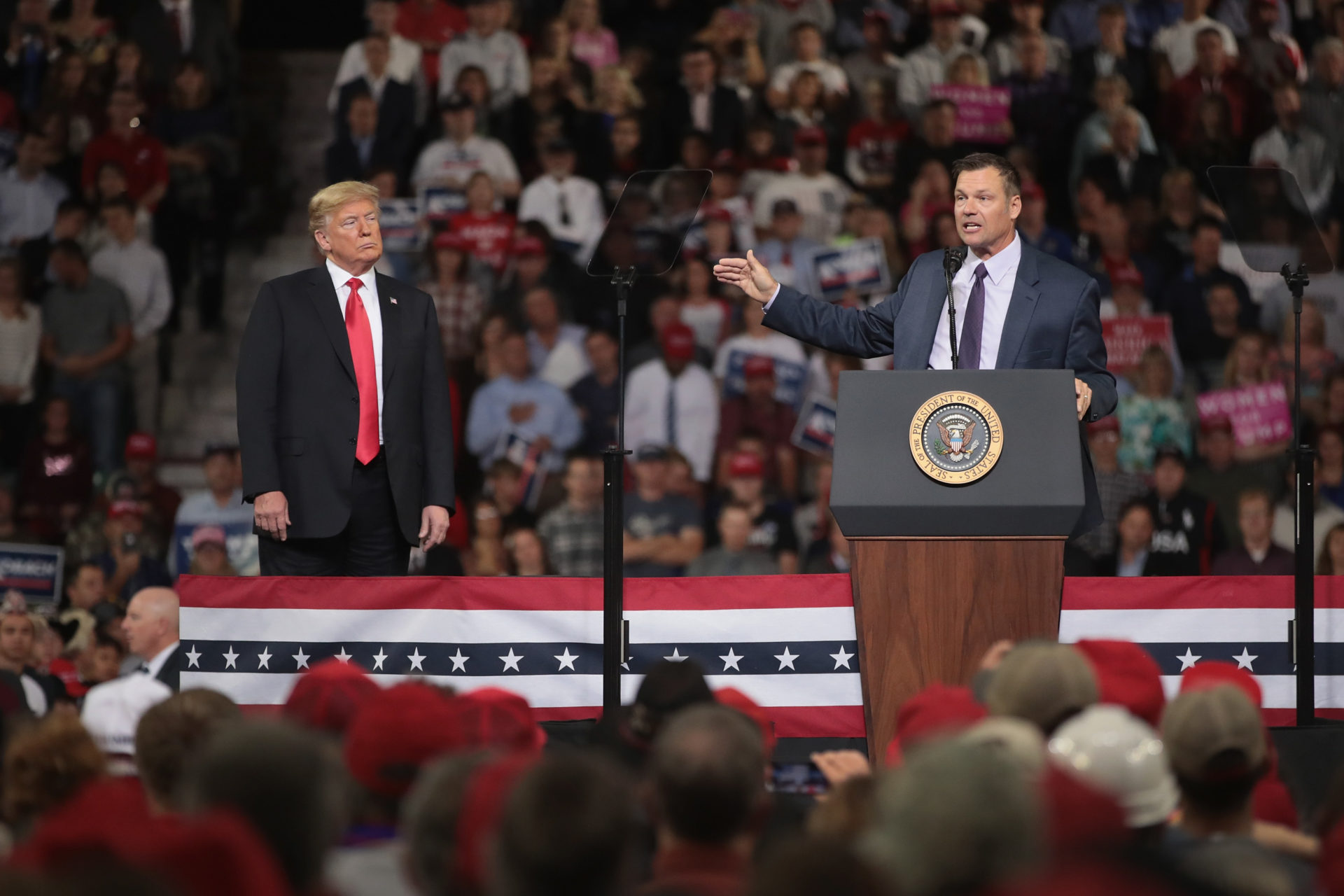 Kris Kobach speaks at an October 2018 gubernatorial campaign rally with President Donald Trump in Topeka, Kansas. While Trump's endorsement wasn't enough to deliver Kobach a victory in that race, the former Kansas secretary of state said 2020 will be different. (Scott Olson/Getty Images)
By Eli Yokley

Secretary of State Mike Pompeo’s decision not to run for Senate in Kansas this year is making some Republicans strategists and leaders in Washington nervous because it makes the path easier for Kris Kobach to get the party’s nomination in August, but the staunch conservative said there’s little reason to believe Kansas Republicans will lose another statewide race if he’s once again their nominee.

In his view, any Republican running can win the seat — including himself.

“It’s highly likely that whoever the Republican is who comes out of the primary would win the general election,” he said in a phone interview Thursday.

His comments came days after Pompeo, the former Kansas congressman Republicans had pressed to enter the race to blunt Kobach’s momentum with the party’s base, told Senate Majority Leader Mitch McConnell (R-Ky.) he would not leave the Trump administration to launch a bid to replace retiring GOP Sen. Pat Roberts.

Related: NRCC Chairman Wants to Keep Impeachment on the Front Burner in 2020

In interviews since McConnell disclosed on Tuesday the decision by Pompeo, half a dozen Republican strategists with knowledge of the state’s political operations or working in Kansas expressed wariness about the uncertainty about the primary, which features a number of candidates who could split the anti-Kobach vote, including Rep. Roger Marshall and state Senate President Susan Wagle.

Central to the worry is Kobach’s high-profile loss to Democrat Laura Kelly in the 2018 gubernatorial election. The former Kansas secretary of state eked out a 343-vote victory over incumbent Gov. Jeff Colyer in the Republican primary but went on to lose by roughly 5 percentage points in the general election.

The strategists say the “anybody but Kobach” approach is the best way for Republicans to hold the Senate seat as Democrats solidify behind Barbara Bollier, a Republican-turned-Democratic state senator who raised $1.1 million in the final three months of 2019. Sure, it’s possible that Kobach could win in November, they say, but his race would make the Sunflower State an unnecessary distraction in the party’s fight to maintain control of the Senate, with expensive fights on the horizon to protect vulnerable incumbents in North Carolina, Colorado, Maine and elsewhere.

If you look at the federal issues, Kansas lines up strongly behind the Republican Party.

During a phone interview on Friday, Marshall said point-blank that Kobach would lose in November.

“We need someone other than that person to win this race,” he said.

Kobach said it’s unfair to compare the political dynamics of the 2018 gubernatorial election to what he would face in a Senate race. He had to contend with the unpopular legacy of Sam Brownback, a Republican who ended his tenure as governor with a 24 percent approval rating, according to Morning Consult’s Governor Approval Rankings. Kansas also tends to oscillate between the two parties for its chief executive while keeping its Senate delegation ruby red since 1930, he said, a dynamic that exists in other states.

“Look no further than Mitch McConnell’s home state,” Kobach said, a reference to Kentucky, where Republican Gov. Matt Bevin lost to Democrat Andy Beshear in November but elections analysts expect the majority leader to cruise to re-election this year.

And in an era when voters are less likely to vote for candidates from both parties on the same ballot, he noted that the presidential election will top the ticket. The last Democratic presidential candidate to win Kansas was President Lyndon B. Johnson in 1964, and the latest Morning Consult poll tracking Trump’s approval in all 50 states found Kansas was one of the 16 states with a majority (52 percent) backing the president’s job performance.

“You have the effect of Trump on the ballot, the inevitable nationalization of the race by outside groups, and the race becoming a referendum on the Trump agenda,” he said. “If you look at the federal issues, Kansas lines up strongly behind the Republican Party.”

Kobach has tied himself closely to the president, who endorsed him over Colyer during the GOP primary in 2018. Kansas’ former top elections official took the lead on Trump’s commission to investigate claims of voter fraud. It put him crosswise with voting rights advocates but allowed him a platform to promote his signature push for strict voter identification laws, an animating issue on the right. He’s also tied himself closely with Trump’s immigration policies.

Trump has not yet weighed in on the Kansas contest, but Kobach said he will likely ask for the president’s endorsement once again. Marshall said he spoke with Trump before Christmas but had not yet asked for an endorsement.

GOP strategists who are cool on Kobach are hoping the president goes in a different direction from 2018, perhaps either by endorsing another candidate or by offering a contender an appointment to the administration in a maneuver to winnow the field.

With Pompeo apparently out of the running, the next three months are a crucial test for candidates vying for support from national party figures in Washington, said one D.C.-based Republican strategist. The candidate who can flex fundraising muscle will increase his or her chances of gaining establishment backing.

In a show of force, Marshall’s campaign, which is already airing television ads in Kansas, said Friday it raised $250,000 in the three days since it was confirmed that Pompeo will not run.

“This race is all about keeping the Senate majority,” Marshall said. “We’re the best person to win the general election.”