Despite attacks on Iraq war vote, Biden has 12-point edge on foreign policy

Former Vice President Joe Biden delivers remarks in New York City on Jan. 7 concerning the Trump administration's recent actions in Iraq. Biden criticized Trump for not having a clear policy regarding Iran after the killing of Gen. Qassem Soleimani, and a new poll shows Democratic primary voters have significantly more trust in him to handle foreign relations than other Democratic presidential candidates. (Spencer Platt/Getty Images)
By Joanna Piacenza

The conflict with Iran has raised questions ahead of Tuesday’s Democratic presidential debate about which candidate would be best suited to handle international crises, and new Morning Consult/Politico polling shows former Vice President Joe Biden with a decisive leg up on his competitors.

Roughly one-third (32 percent) of Democratic primary voters said they trust the former vice president the most on foreign relations, a 12-percentage-point advantage over the next most trusted on the list: Sen. Bernie Sanders (I-Vt.). 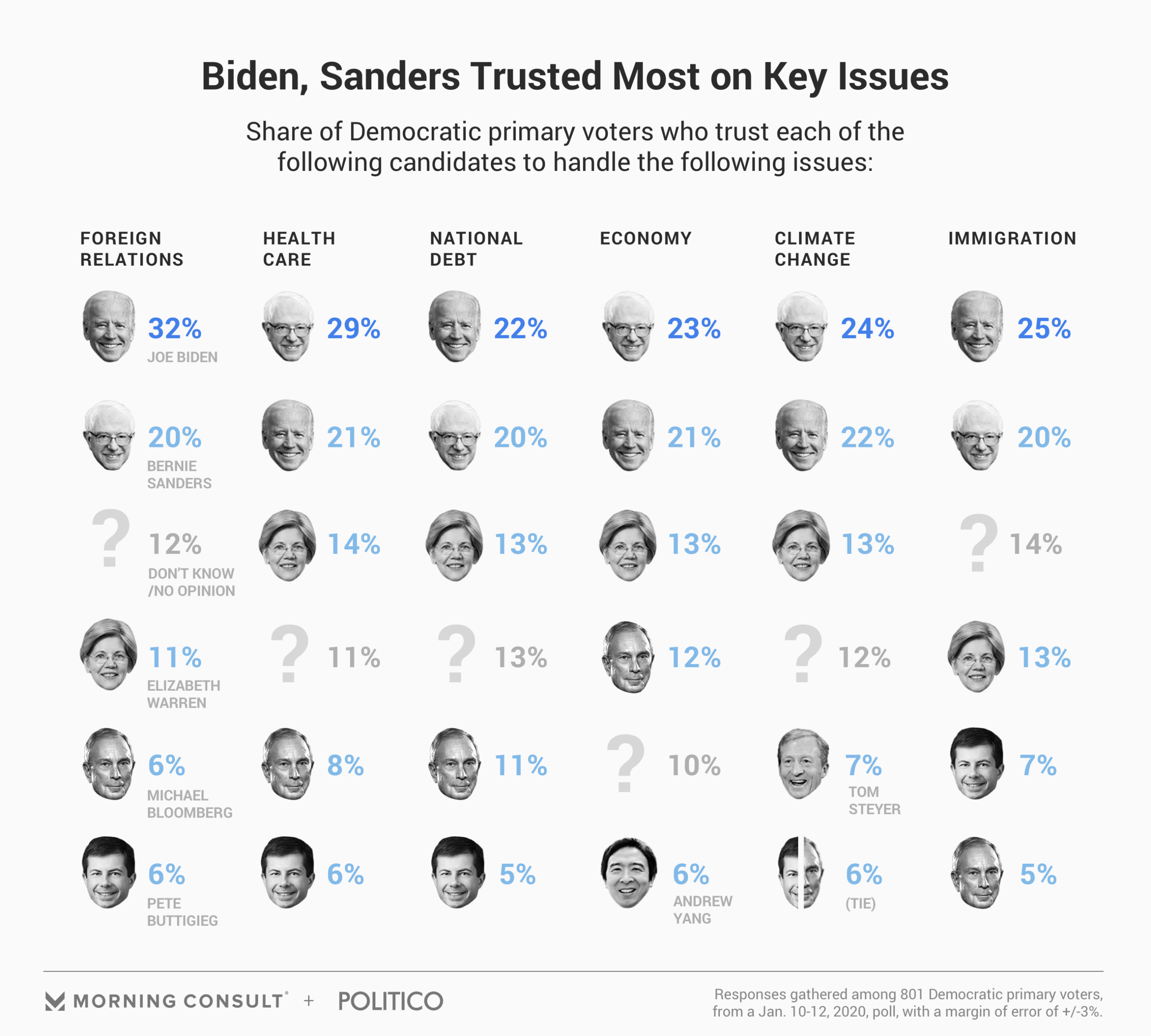 No other candidate held a double-digit edge over an opponent on any of the issues in the survey.

The Iran crisis, sparked by the U.S. drone attack in Iraq that killed Gen. Qassem Soleimani, the Iranian regime’s highest-ranking military official, during the first week of January, provided an opportunity for Sanders to draw a contrast on foreign policy with Biden on the campaign trail, particularly regarding the latter’s 2002 vote in favor of the Iraq war. But the poll finds those jabs are yet to resonate with the Democratic electorate on a nationwide scale.

The survey nonetheless indicates good news for the Sanders camp: Democratic primary voters trust him more than Biden to handle health care, albeit by a smaller margin.

The Jan. 10-12 survey polled 801 registered voters who indicated they may vote in the Democratic primary or caucus in their state, with a 3-point margin of error for those responses.

Biden and Sanders are the two most trusted candidates on every issue Morning Consult tested, while Sen. Elizabeth Warren (D-Mass.) holds strong at number three or four, though in many cases, voters were about as likely to say they were unsure about whom they trusted on a certain issue than to say they sided with her.

Former South Bend, Ind., Mayor Pete Buttigieg, who was locked in a statistical three-way tie with Sanders and Warren among likely Democratic Iowa caucusgoers, according to a Jan. 2-8 Des Moines Register/CNN poll, was roughly half as trusted as Warren on each issue, and less trusted than billionaire Michael Bloomberg on the national debt and the economy. A Jan. 9-12 Monmouth University poll shows the race is still volatile, with Biden leading with 24 percent of likely Iowa Democratic caucusgoers and Sanders, Buttigieg and Warren trailing in the teens.