Why Bernie Sanders Is Electable, Too

Some Democrats are nervous that giving Vermont Sen. Bernie Sanders, a self-described socialist, the party’s presidential nomination would make it harder to achieve their ultimate goal of making President Donald Trump a one-term president.

Jim Messina, who managed former President Barack Obama’s 2012 re-election bid, said in a recent Politico interview that Trump would love to run against Sanders, noting that Republicans have already signaled they plan to hammer the socialism angle in the fall campaign.

But a new Morning Consult poll tracking the strength of the top Democratic contenders against Trump in hypothetical matchups found Sanders performs better than his rivals, including front-runner Joe Biden, with groups viewed as key to beating the unpopular incumbent.

Sanders leads Trump in the latest head-to-head polling 46 percent to 42 percent, picking up 2 percentage points on the incumbent Republican since the previous survey and statistically tied with Biden, who leads Trump 46 percent to 41 percent. The latest national survey, which was conducted Jan. 6-12 and polled between 8,218 and 8,386 registered voters, has a 1-point margin of error. 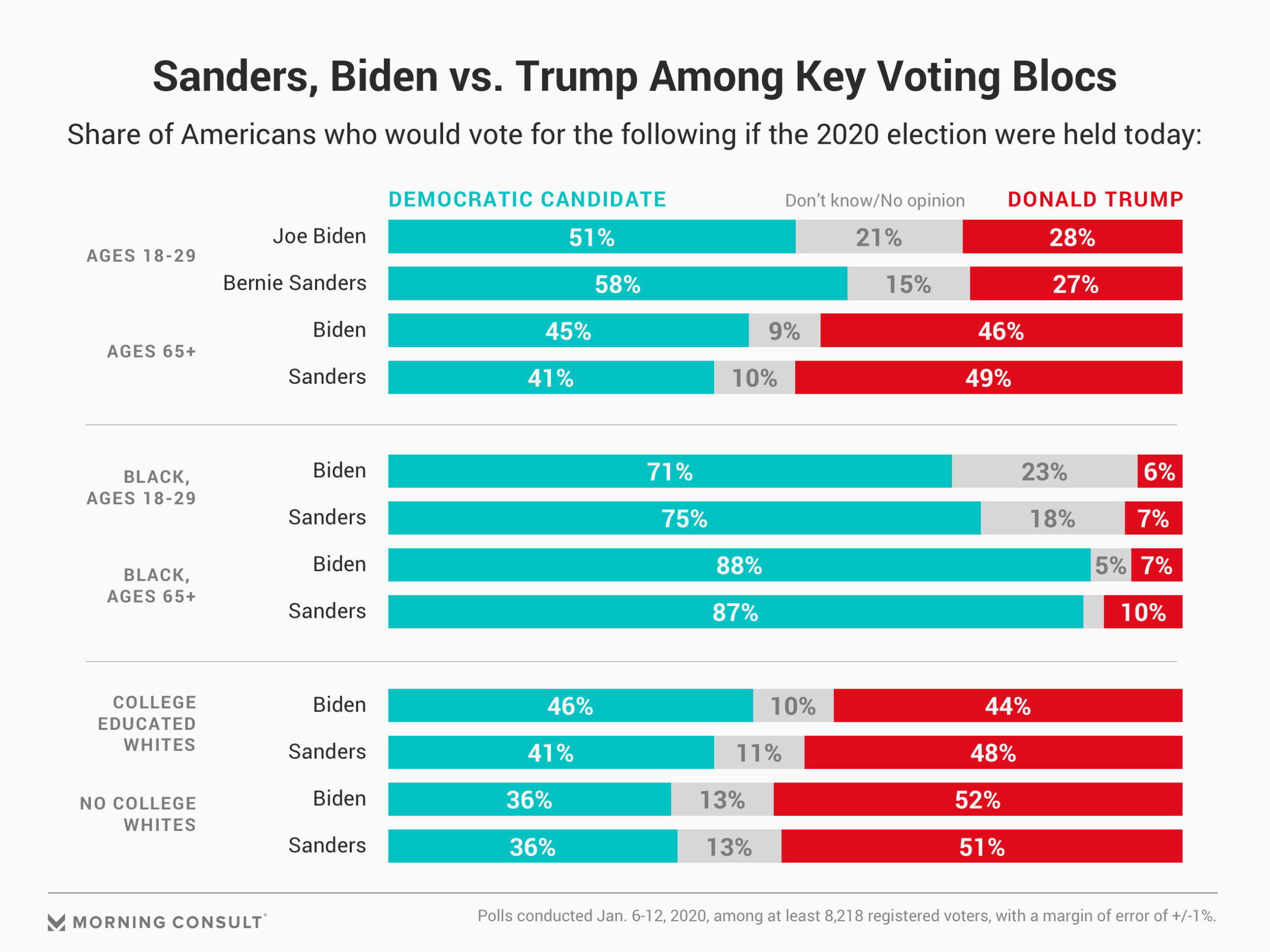 Sanders outperforms the former vice president against Trump among voters ages 18-29, those who are not at all interested in politics and self-described independents — just as he does in primary election polling against Biden.

The survey also found Sanders outpacing Sen. Elizabeth Warren (D-Mass.), billionaire Michael Bloomberg and Pete Buttigieg with those groups. But looking toward the general election, Buttigieg seems like a safer choice than Sanders with voters older than 65 and whites with a college degree.

The poll found people who voted for Trump in 2016 were only 2 points more likely to say they’d vote for Biden over Trump than Sanders, while Sanders has an advantage with independents. 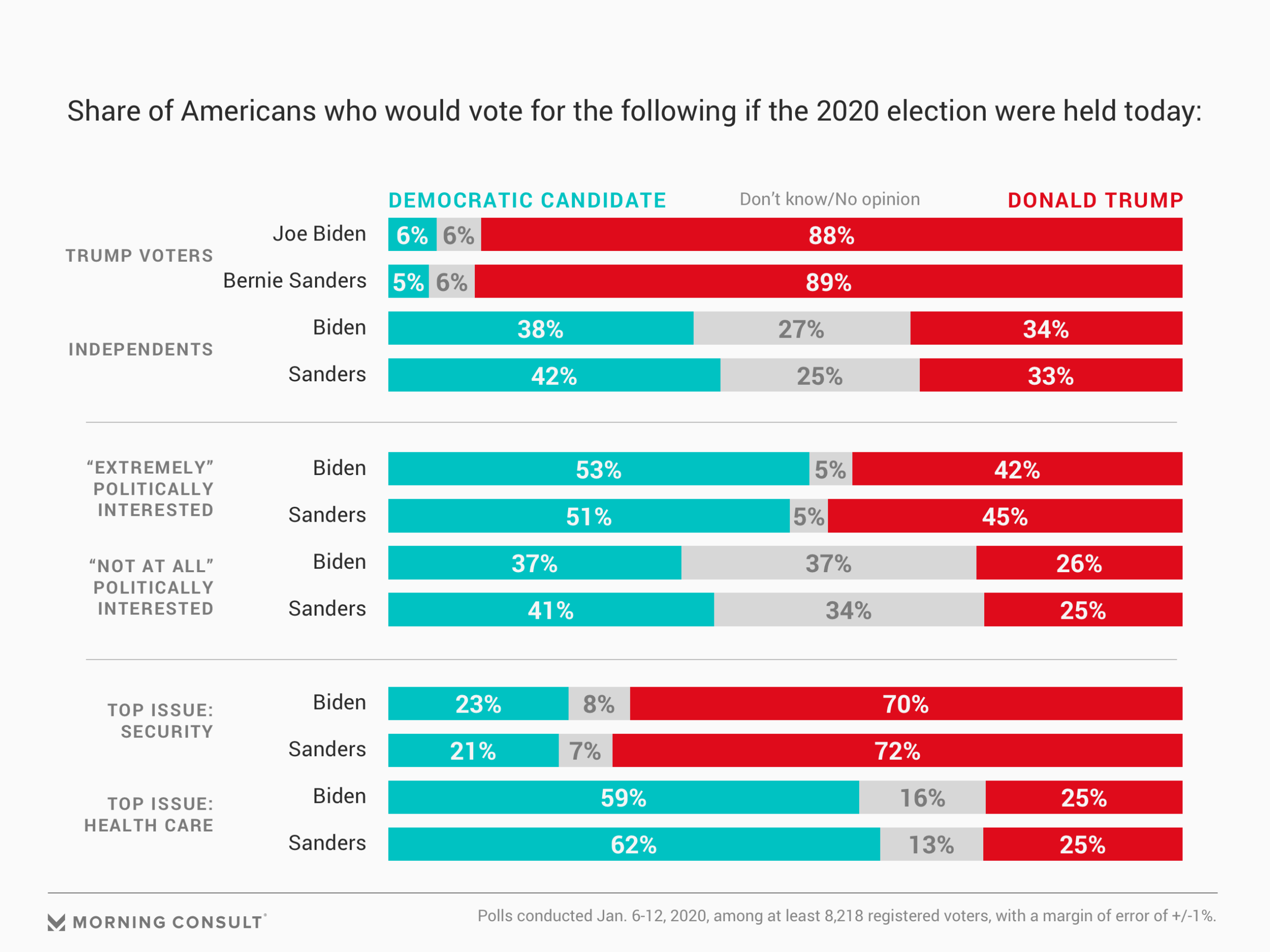 The latest poll also helps make the case for Biden: The former vice president is the strongest candidate against Trump among college-educated whites, voters 65 or older (historically high-propensity voters) and suburban white women, a bloc that’s been credited with handing Democrats their House majority in 2018.

In a sign of the early nature of the race, there is some volatility in the week-to-week data, particularly samples which combine some demographics, such as race, age or educational attainment. Those groups also have higher margins of error.

The head-to-head findings come as Sanders pulled to within 6 points of Biden with Democratic primary voters, the thinnest margin since mid-April. He trails Biden, 23 percent to 29 percent, solidifying his second place position among that group ahead of the Iowa Democratic debate.

Trump has reacted to the Vermont senator’s position in the Democratic primary with apparent glee, saying Sunday on Twitter, “Sanders is surging in the polls, looking very good against his opponents in the Do Nothing Party. So what does this all mean? Stay tuned!”

To which Sanders responded: “It means you’re going to lose.”