President Donald Trump waves as he boards Marine One while departing from the White House on Jan. 13. A new poll shows enduring support for his decision to order a drone strike that killed Qassem Soleimani, Iran's top military commander. (Mark Wilson/Getty Images)
By Eli Yokley 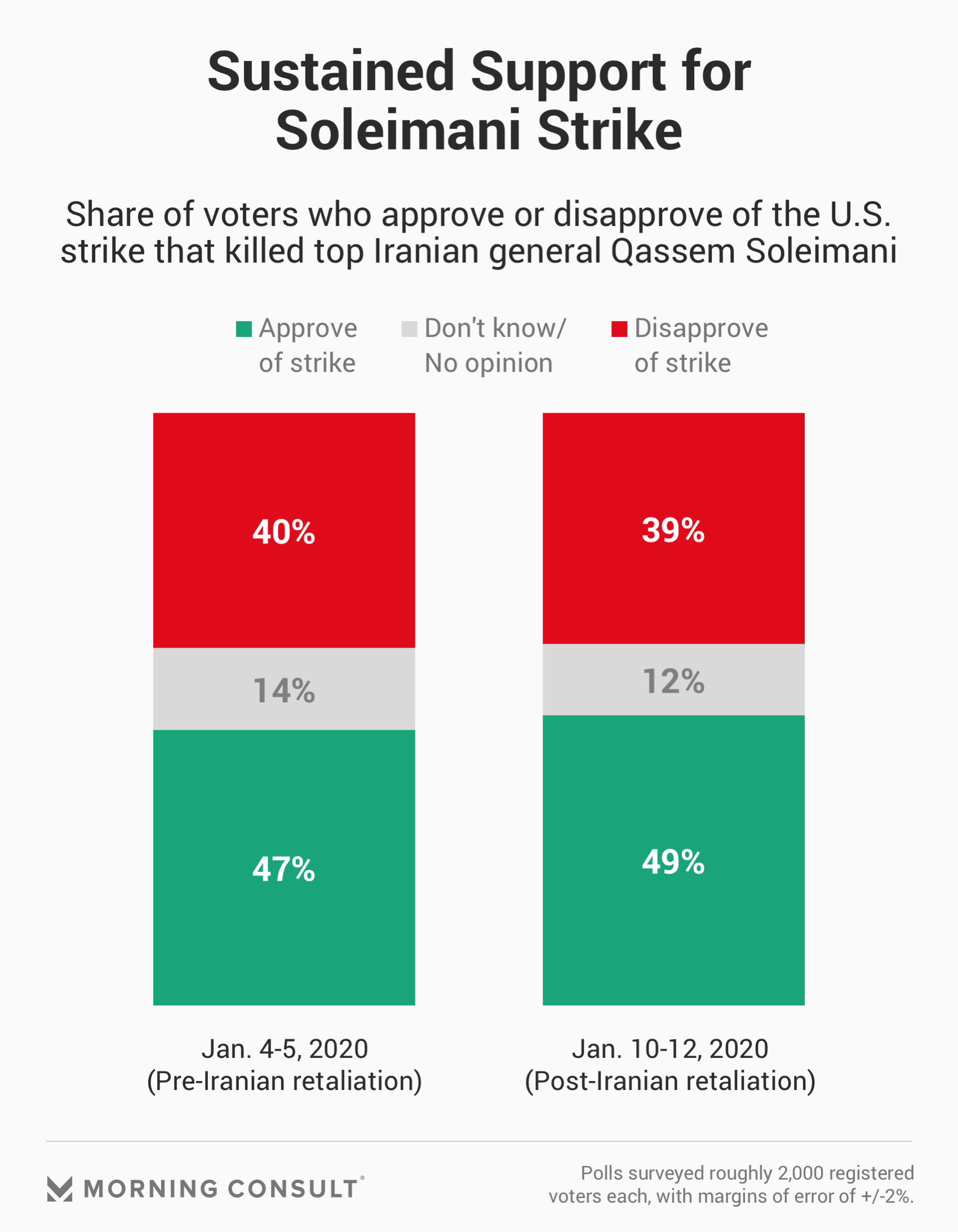 The latest Morning Consult/Politico poll found 49 percent of registered voters approve of Trump’s decision, while 39 percent disapprove. The figures are statistically unchanged from a Jan. 4-5 poll, conducted before Iran retaliated with missile strikes aimed at U.S. troops stationed in Iraq — and before administration officials were grilled by members of Congress amid shifting explanations over whether Trump’s statements that Soleimani posed an imminent danger to the United States were accurate.

As was the case last week, opinions on the strike split along party lines, with 85 percent of GOP voters approving of the strike and 71 percent of Democrats opposing Trump’s decision. The lion’s share of independents (48 percent) also backed the president’s move. 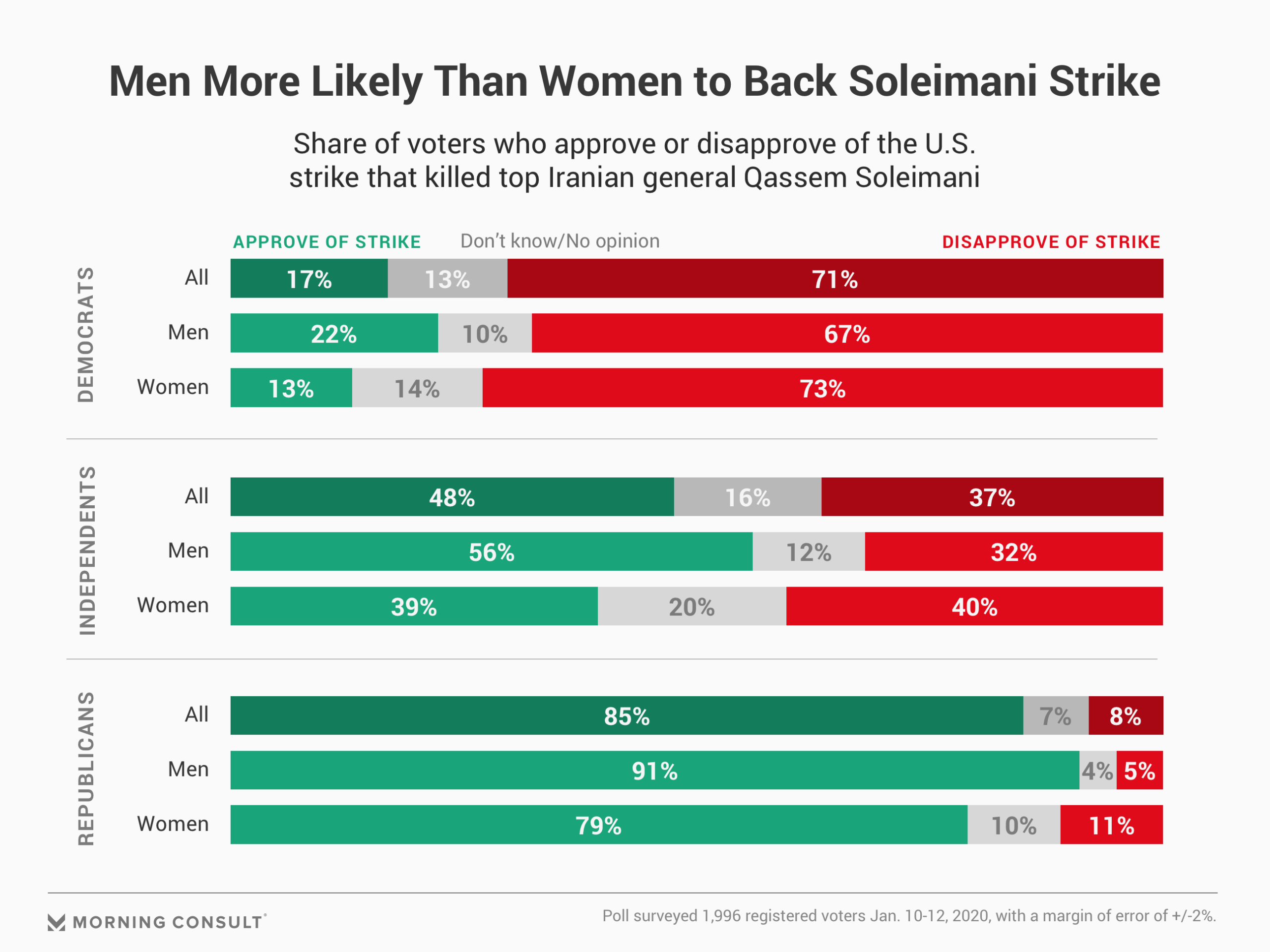 But while voters were more likely to back Trump’s decision to take out Soleimani, he’s losing the argument about whether he acted properly with respect to Congress: Forty-eight percent said Trump should have sought congressional approval before moving forward with the airstrike in Baghdad, compared to 41 percent who said he was correct to move forward without congressional approval.

The question resulted in the resurfacing of a debate on Capitol Hill about war powers, with Democrats and even a handful of Republicans arguing that the president exceeded his constitutional authority in launching the strike. Last week, the Democratic-led House passed a nonbinding resolution expressing its dissent on the issue. 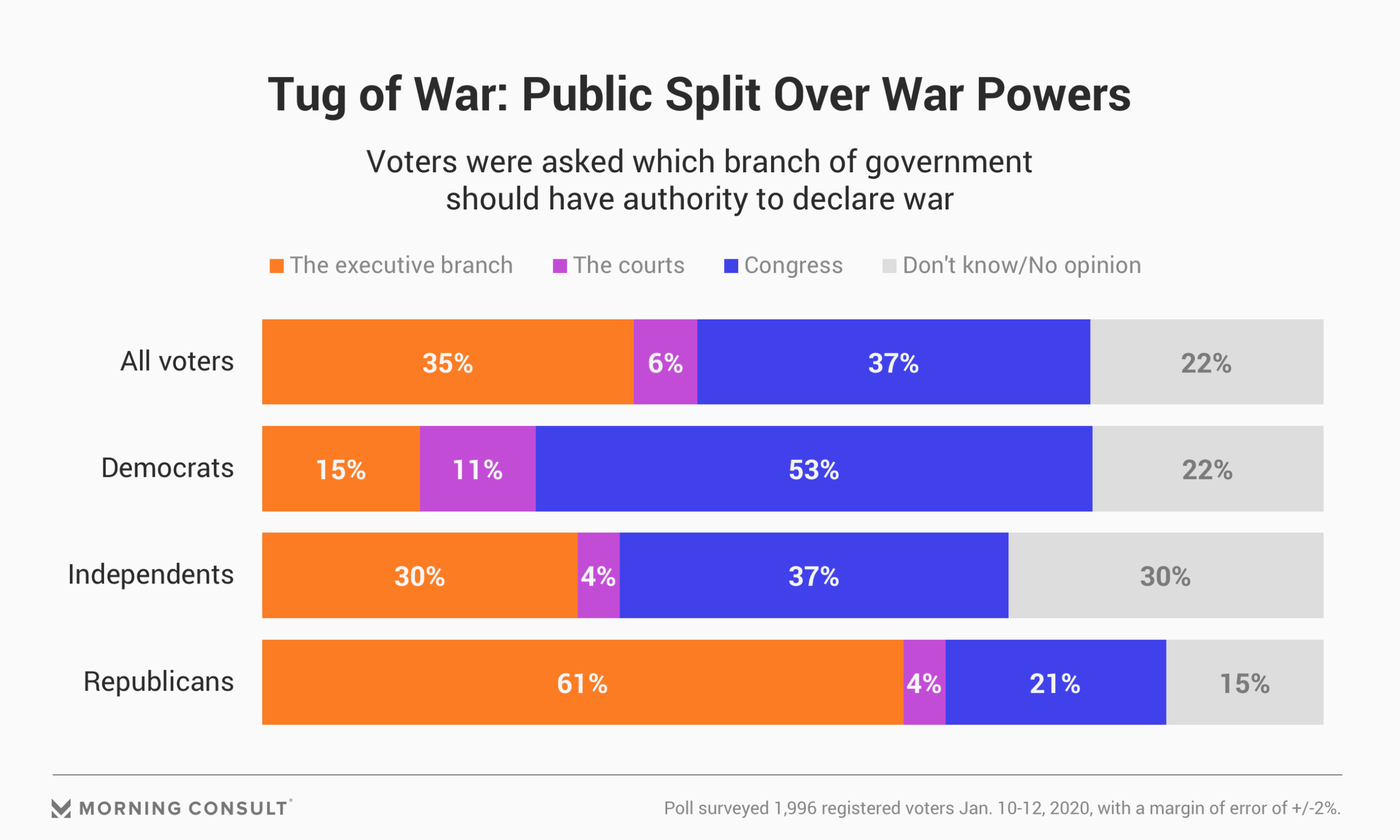 The Constitution grants Congress the sole power to declare war, but voters had differing views on the question, driven largely by their partisan leanings. Most Democrats (58 percent) said Congress should have authority, while 61 percent of Republicans said that authority should rest with the president and the executive branch.

More popular was Trump’s decision to militarily stand down following Iran’s Jan. 8 missile launches. Seventy-one percent of voters – including 62 percent of Democrats and 84 percent of Republicans – support Trump’s decision to forego further military action against Iran, and 58 percent, driven by Republicans and independents, support his move to impose economic sanctions on the country. Democrats narrowly oppose the sanctions, 41 percent to 35 percent.

Events surrounding the tensions between the United States and Iran have had high salience among the voting public, registering as the most pervasive events of 2020 so far, according to Morning Consult polling. Fifty-one percent of voters said they had seen, read or heard “a lot” about Iran’s missile attacks and 49 percent said the same last week of the U.S. strike that killed Soleimani. (By contrast, 30 percent said they’d heard “a lot” about Prince Harry and Meghan Markle announcing they will begin the process of stepping down as senior members of the royal family.)

Related: Can You Locate Iran? Few Voters Can.