Voters continued to sour on some, as Trump’s unpopularity threatens to drag them further

The Senate’s impeachment trial is set to provide a familiar political dilemma for the chamber’s most vulnerable Republicans: Cross President Donald Trump and face the wrath of his ardent base, or side with him and alienate the broader coalition in their states, where the president is unpopular.

GOP strategists say that barring any major surprises, it’s a relatively easy decision, with vulnerable Republicans armed with the option of showing independence on procedural votes in the Senate trial. An acquittal vote is likely to preclude a primary challenge, and senators can take their chances that the issue will be largely off voters’ radars in 11 months.

Nonetheless, Morning Consult’s latest Senator Approval Rankings, compiled from nearly 500,000 survey interviews conducted among registered voters in all 50 states during the final three months of 2019, found a small needle for the GOP to thread over the next several weeks. All five of the most vulnerable Senate Republicans head into the trial with voters in their states either souring on their job performance or with perceptions of the president threatening to pull them further down.

The former applies to Sens. Martha McSally (R-Ariz.) and Susan Collins (R-Maine), whose respective 5- and 4-percentage-point declines in their net approval rating between the third and fourth quarters of 2019 put them a respective 3 and 10 points underwater. 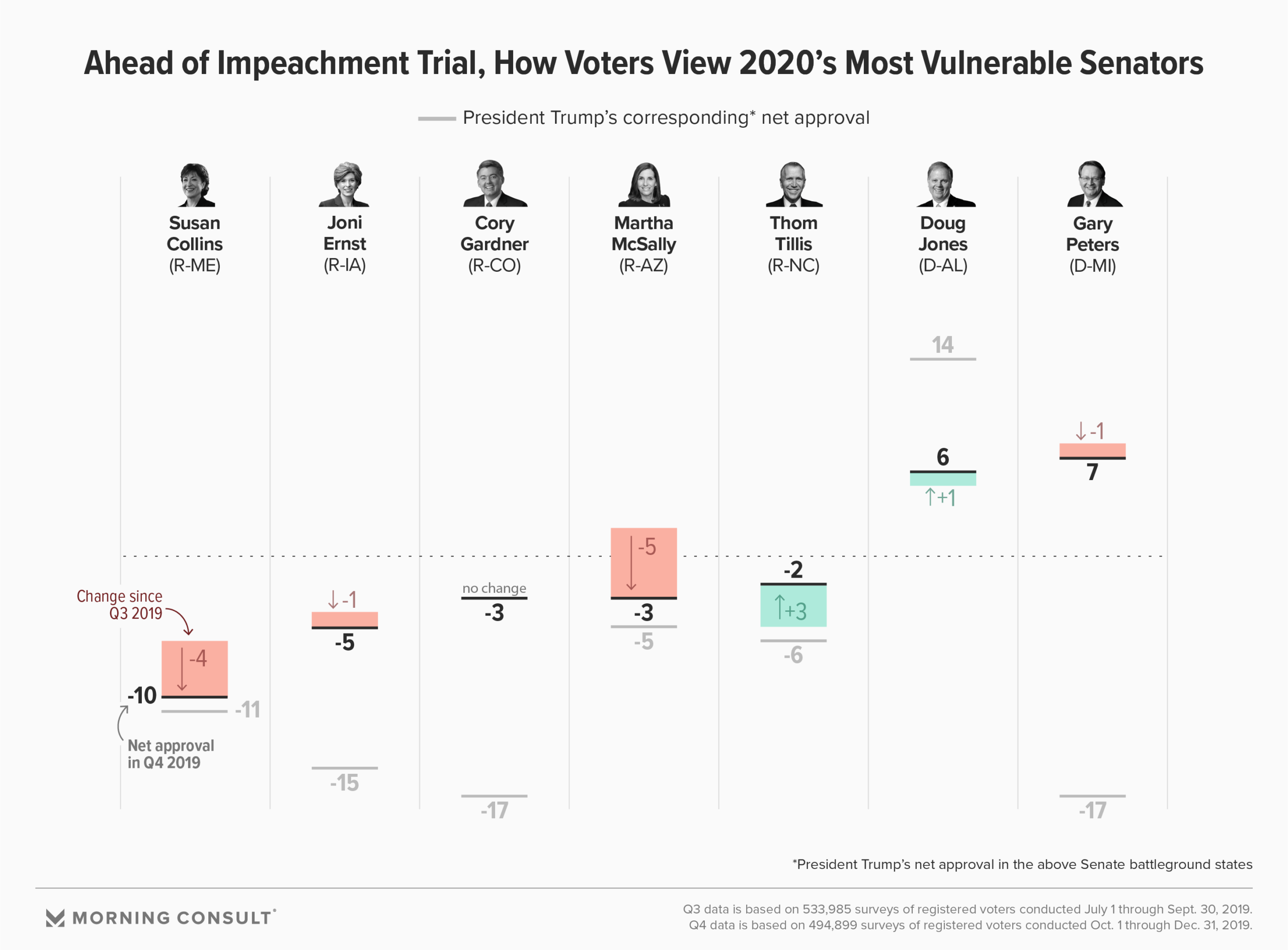 Sens. Cory Gardner (R-Colo.) and Joni Ernst (R-Iowa) are contending with the latter problem. The president’s net approval rating is 17 points underwater in Colorado and 15 points in the red in Iowa. And while Sen. Thom Tillis (R-N.C.) saw a modest improvement in his net approval at the end of last year (plus 3 points), he’s still in negative territory, slightly outpacing Trump in the state where Republicans will hold their national convention this year.

If ultimately voting to acquit Trump is the obvious answer to the question, Republican strategists say that makes the process by which Senate Republicans arrive at that position all the more important.

“You want the American people to see a fair and thoughtful process. This is a big-enough issue that people will pay attention in a way they don’t on other issues,” said Michael Steel, a Republican strategist who worked for the Republican Party in North Carolina when Tillis was first elected to the Senate in 2014. “I would advise them to be open on process but, absent some startling revelations, to oppose conviction.”

Leonardo Alcivar, a Republican strategist who has advised Rep. Elise Stefanik (R-N.Y.), who dramatically raised her profile during the House’s impeachment hearings, said it’s vital that “vulnerable Republicans are able to demonstrate to voters that they’re engaged in the process,” before adding that a vote to convict Trump would be a political “death sentence, barring something crazy.”

These dynamics have borne out in how the various senators have approached the question of Trump’s ouster from office as it’s made its way to the Senate.

Collins, for example, has been among the vocal advocates for an open process and hearing testimony from John Bolton, Trump’s former national security adviser who has offered to testify if subpoenaed, aligning herself with some Democrats.

That posture comes as she’s lost some of the ground she made up with Republican voters in Maine following her strong defense of Supreme Court Justice Brett Kavanaugh during his controversial Senate confirmation. Meanwhile, she continued to bleed support among Democrats (from minus 41 points to minus 48 points) and independents (from minus 5 points to minus 10 points) in the fourth quarter, ahead of what’s expected to be a competitive race against a well-funded Democratic rival this fall, Maine House Speaker Sara Gideon.

Related: NRCC Chairman Wants to Keep Impeachment on the Front Burner in 2020

With downward movement among voters of all political stripes between the last two quarters of 2019, she ended the year as the country’s most unpopular senator as she launched her re-election campaign, unseating Senate Majority Leader Mitch McConnell (R-Ky.) for the distinction with a 52 percent disapproval rating.

Collins’ stance is similar to Sen. Mitt Romney’s. The Utah Republican, who is not on the ballot this year, also said he wants to hear from more witnesses, and appears to be taking flak from the Republican base as he’s criticized Trump’s Ukraine narrative. Between the third and fourth quarters, Romney’s net approval fell 9 points following an 18-point drop among Republicans. 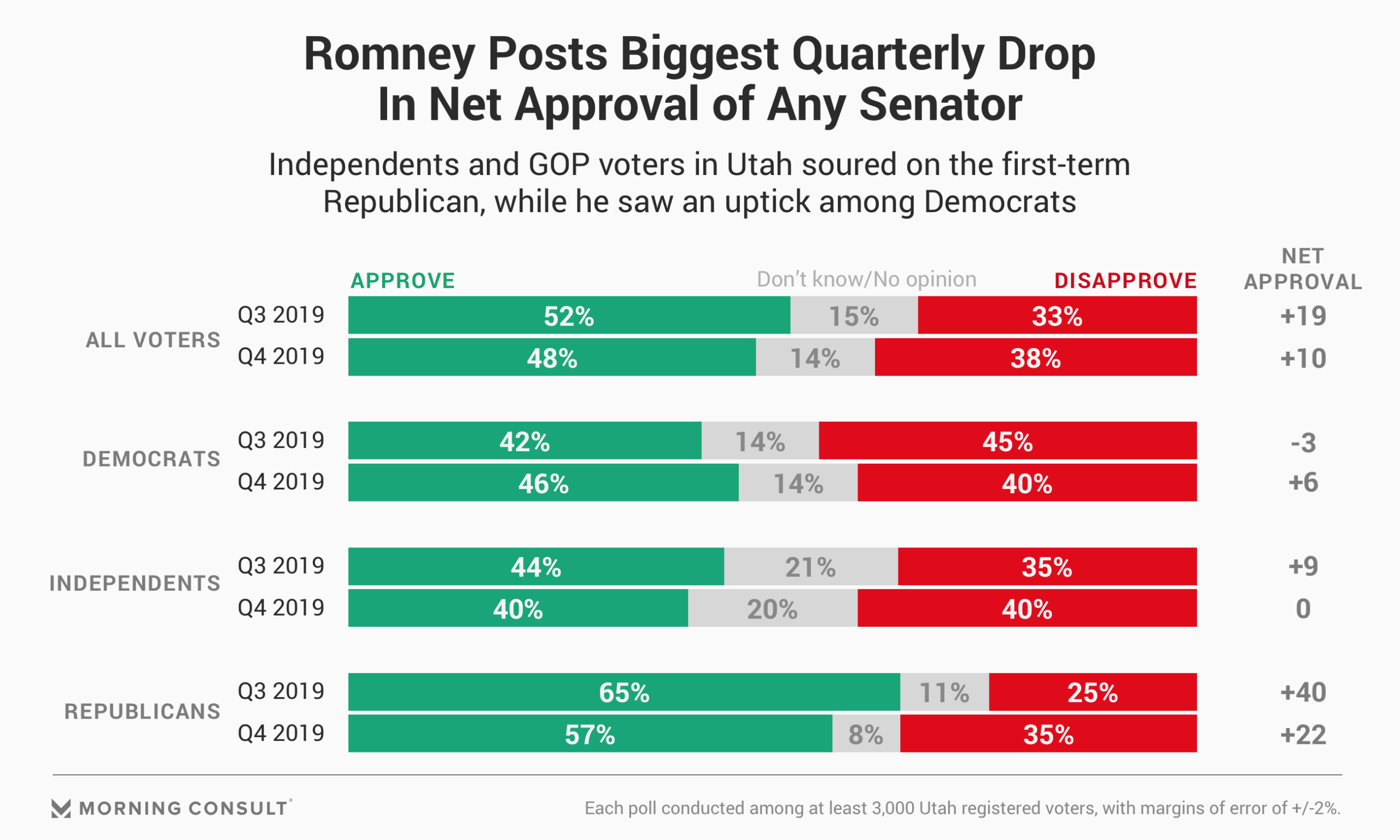 On the other extreme is McSally. The first-term Republican, who was appointed to her seat by Gov. Doug Ducey (R) after her unsuccessful open-seat challenge to Sen. Kyrsten Sinema (D) in 2018, saw her net approval drop, especially among Republicans (from 49 points to 41 points). Last month, McSally said she hadn’t been convinced the president deserved impeachment in the first place. And on Wednesday, McSally amped up her rhetoric, refusing to answer a CNN reporter’s question about her position on additional witness testimony and calling him “a liberal hack,” prompting a fundraising boost from the president’s re-election campaign.

Steel said Trump’s conflicting messages on what he wants out of a trial — a full acquittal following the testimony of witnesses or a complete dismissal — could provide vulnerable Republicans cover on votes about witnesses, as long as they ultimately vote the president’s way when it comes to removal.

“It’s hard to argue Republican voters will punish Republican senators for voting for transparency and more information when, at times, the White House has been in favor of witnesses,” said Steel, a former adviser to House Speaker John Boehner (R-Ohio).

Democrats are defending relatively few competitive seats in the chamber, but the Senate vote will not be an easy one for Sen. Doug Jones of Alabama, the minority’s most vulnerable incumbent. While he is 6 points in the black with Yellowhammer State voters, he’s still significantly less popular there than the president.