How Voters Grade Trump, Three Years Into His Presidency

Overall marks have stayed about the same since Trump's first year, but he’s getting more A’s on jobs, economy

President Donald Trump speaks during a Jan. 16 event in the Oval Office. A new poll found voters are grading the president better on jobs and the economy, although overall perceptions of his work in office are unchanged. (Win McNamee/Getty Images)
By Eli Yokley

President Donald Trump is beginning the last year of his first term in office with improved marks from voters on his handling of jobs and the economy, but grades on his overall job performance are virtually unchanged since the end of his first year.

The Jan. 10-12 survey polled 1,996 registered voters and has a margin of error of 2 percentage points. 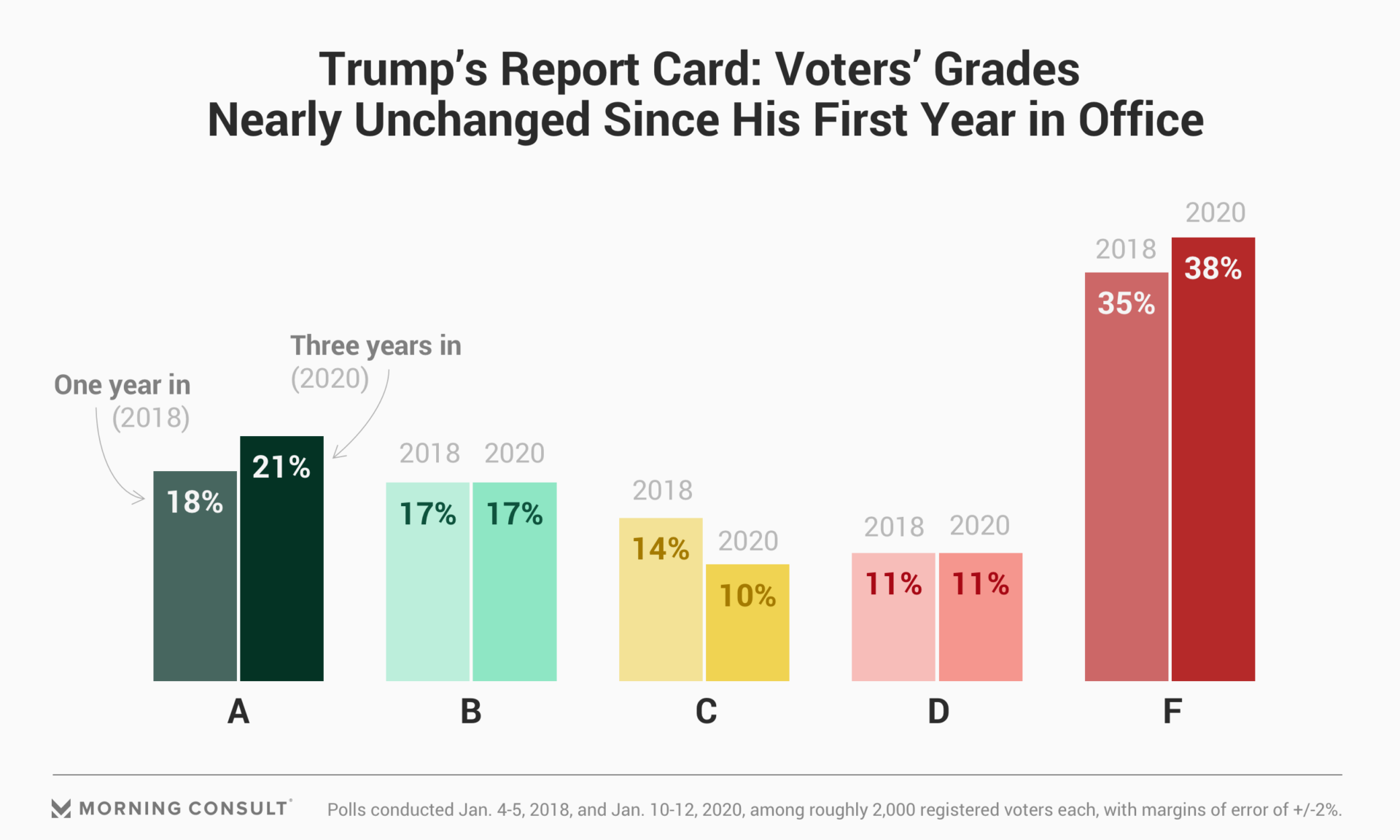 The lack of change and the hardening of sentiment mirrors the steadiness in his overall job approval rating, where Republicans and Democrats have grown more enthusiastic in their diametrically opposed opinions of the president. The latest poll found 43 percent of voters approve of Trump’s job performance, compared with 44 percent in 2018, and 54 percent disapprove, compared with 51 percent a year into his presidency.

Despite the stagnation in views on general performance, voters are grading Trump more favorably on jobs and the economy, two issues viewed as key to his electoral success since they’re usually top of mind for voters. Since 2018, the share of voters who gave Trump an A on his handling of jobs increased 9 points, to 33 percent, and 32 percent gave him the highest mark for his handling of the economy, up 7 points over the same time frame.

Trump also saw an improvement in how voters graded his handling of fighting terrorism: While 32 percent gave him an F, the share who gave him an A (30 percent) increased 8 points since the one-year mark.

Trump received the worst marks from voters on his handling of climate change and global warming, a key issue among the youngest voters; immigration, where he scored highly with his Republican base; and foreign relations, an issue that has risen to the forefront amid tensions with Iran. On those three issues, more than 4 in 10 voters gave him F’s.

As for voters’ predictions for this year, 3 in 10 voters said they expect Trump’s performance will get better, while 21 percent said they think it will stay the same and 43 percent said it will get worse.