Democratic primary voters’ perception of Sen. Bernie Sanders (I-Vt.) fell amid his clash with Sen. Elizabeth Warren (D-Mass.) over whether he said a woman cannot win the presidency, but it has not trickled down to their supporters.

The latest Morning Consult polling tracking the Democratic primary found Sanders’ net favorability among likely primary voters — the share with favorable views minus those with unfavorable views — fell 6 points since before his clash with Warren, but that didn’t affect his overall first-choice support outside the survey’s margin of error. Seventy-three percent of primary voters view Sanders favorably, down 3 points from the Jan. 7-13 survey, while 20 percent view him unfavorably, up 3 points in the Jan. 15-19 polling. 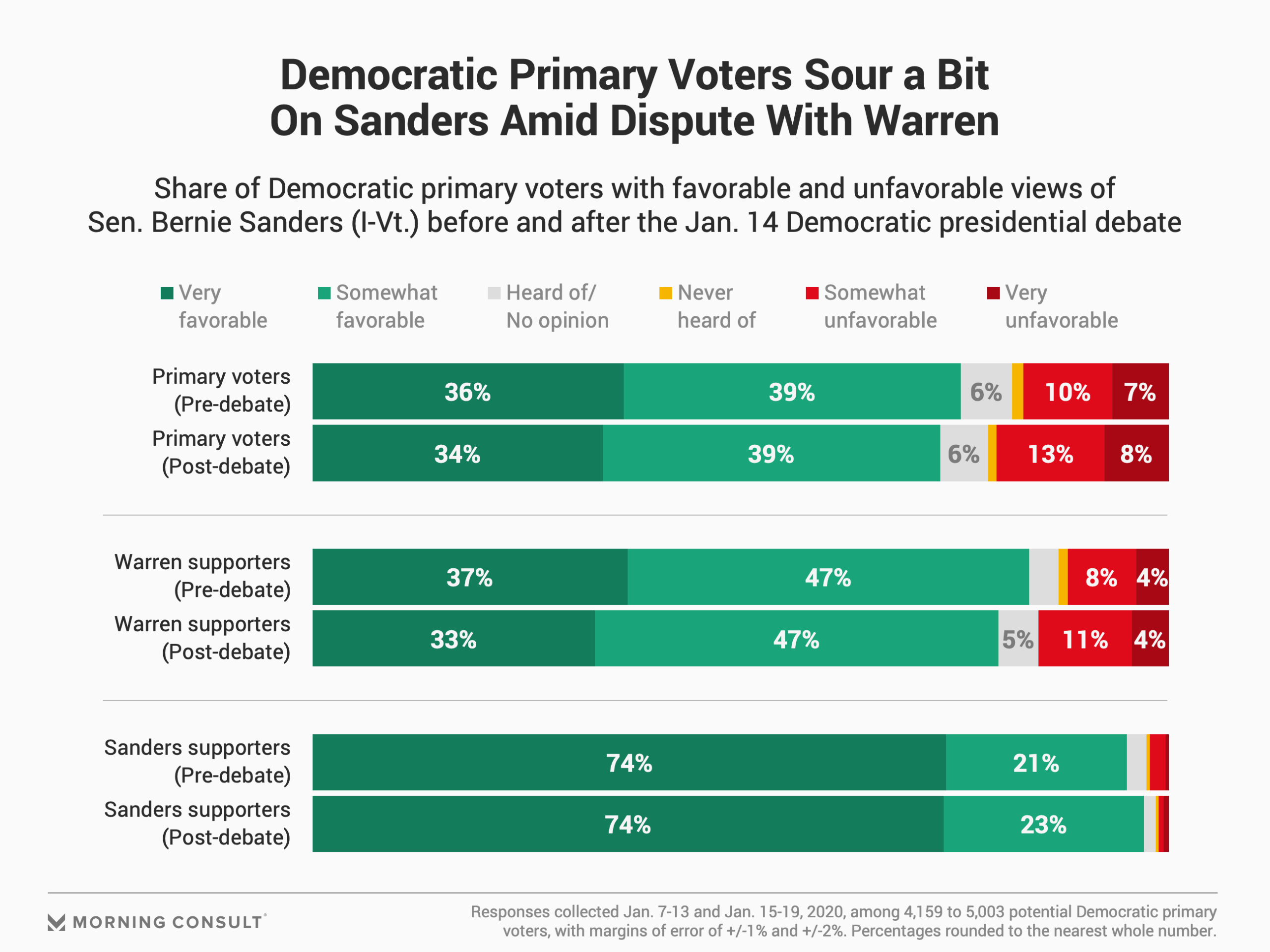 The negative drift in views put Sanders within the margin of error of Joe Biden’s favorability rating, though the former vice president still leads him in first-choice support, 29 percent to 24 percent.

The clash between Warren and Sanders began Jan. 13, a day prior to the final debate before the Iowa caucuses, when CNN reported that Sanders had told Warren in a 2018 meeting that he did not think a woman could win the White House.

Before the debate, Sanders denied the claim, but Warren issued a statement saying the reporting was true. On stage, Sanders again denied he said a woman couldn’t win the presidency, while Warren made her case about why a woman can win. When the debate was over, a microphone captured a tense interaction in which Warren said Sanders called her a liar on national television, a tape that was a key focus of post-debate news coverage.

Related: Why Bernie Sanders Is Electable, Too

Notably, there was no measurable shift in how Warren’s supporters viewed Sanders following the dispute, with his net favorability number 12 points higher than the figure for the overall population of voters who indicated they would vote in the Democratic primary or caucus in their states.

Overall, there was no statistically significant change in first-choice support before and after the debate for the candidates on the stage, though Sen. Amy Klobuchar (D-Minn.) saw a 3-point boost in second-choice vote share among Warren’s supporters following the case the Massachusetts Democrat made for a woman’s electability on Jan. 14.