White, male candidates viewed as having easier paths to victory

Democratic presidential candidates participate in the Jan. 14 debate in Des Moines, Iowa. While Sen Elizabeth Warren (D-Mass.), second from left, touted her electoral record during the moderated discussion, a new survey finds Democratic voters believe it will be more difficult for a woman to defeat President Donald Trump in November. (Scott Olson/Getty Images)
By Eli Yokley

Following a public debate over electability that pitted female candidate Elizabeth Warren against self-avowed socialist Bernie Sanders, a new Morning Consult/Politico poll finds that more than half of Democratic voters are skeptical about whether a person holding either of those traits can beat President Donald Trump in November.

According to the Jan. 17-19 survey, 58 percent of Democratic voters said it would be difficult for a woman to beat Trump, and 52 percent said the same of a socialist. The margin of error for Democratic responses was plus or minus 4 percentage points. 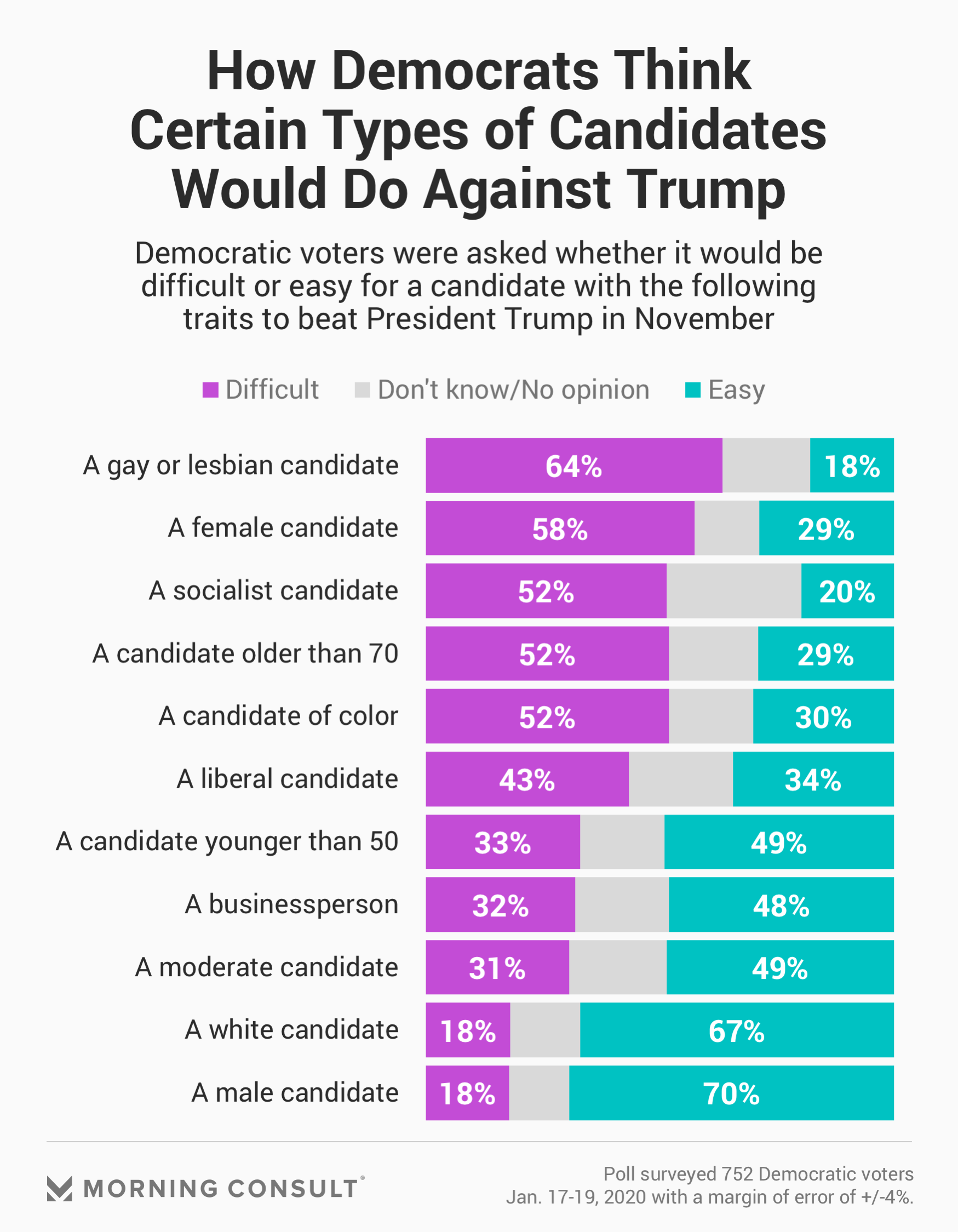 The poll comes after Warren said in a statement that Sanders, a self-described Democratic socialist, told her in 2018 that he did not think a woman could beat Trump. Sanders has denied Warren’s account of their meeting, and the rift between the two of them spilled onto the debate stage in Iowa on Jan. 14.

“Can a woman beat Donald Trump?” Warren asked. “Look at the men on this stage. Collectively, they have lost 10 elections.” To applause, she pointed to herself and Sen. Amy Klobuchar (D-Minn.) as the only candidates on the debate stage to “have won every single election that they’ve been in.”

Democrats were most likely to say it would be easy for a man (70 percent) to win in November, followed by 67 percent who said a white candidate.

Despite three septuagenarians (former Vice President Joe Biden, Sanders and Warren) leading the national polling for the party’s nod to face 73-year-old Trump, 52 percent of Democrats said it would be difficult for someone older than 70 to win — the same share who said a victory would be hard for a person of color.

Democrats began the early stages of their party’s nominating contest by touting the diversity of its field, but Biden and Sanders — both straight, white men — have set the pace throughout Morning Consult’s tracking of the primary race, save for a handful of weeks in which Warren led Sanders.

More than a woman, a socialist or a person of color, Democratic voters — both men and women — are most doubtful of the chances a gay or lesbian candidate would have against Trump, with 64 percent of Democratic voters saying it would be hard for such a person to win in November.

Former South Bend Mayor Pete Buttgieg of Indiana, who is gay, has 8 percent support after being surpassed by the billionaire former New York City Mayor Michael Bloomberg for fourth place in the race.

Regardless of the nominee’s personal traits, Democrats are bracing for a tough fall campaign: Half of Democrats (51 percent) said it will be difficult to beat Trump in November, compared to 37 percent who said it would be easy.