Among voters who had heard about any of his tweets, 72% did so through TV and cable news vs. 29% on Twitter 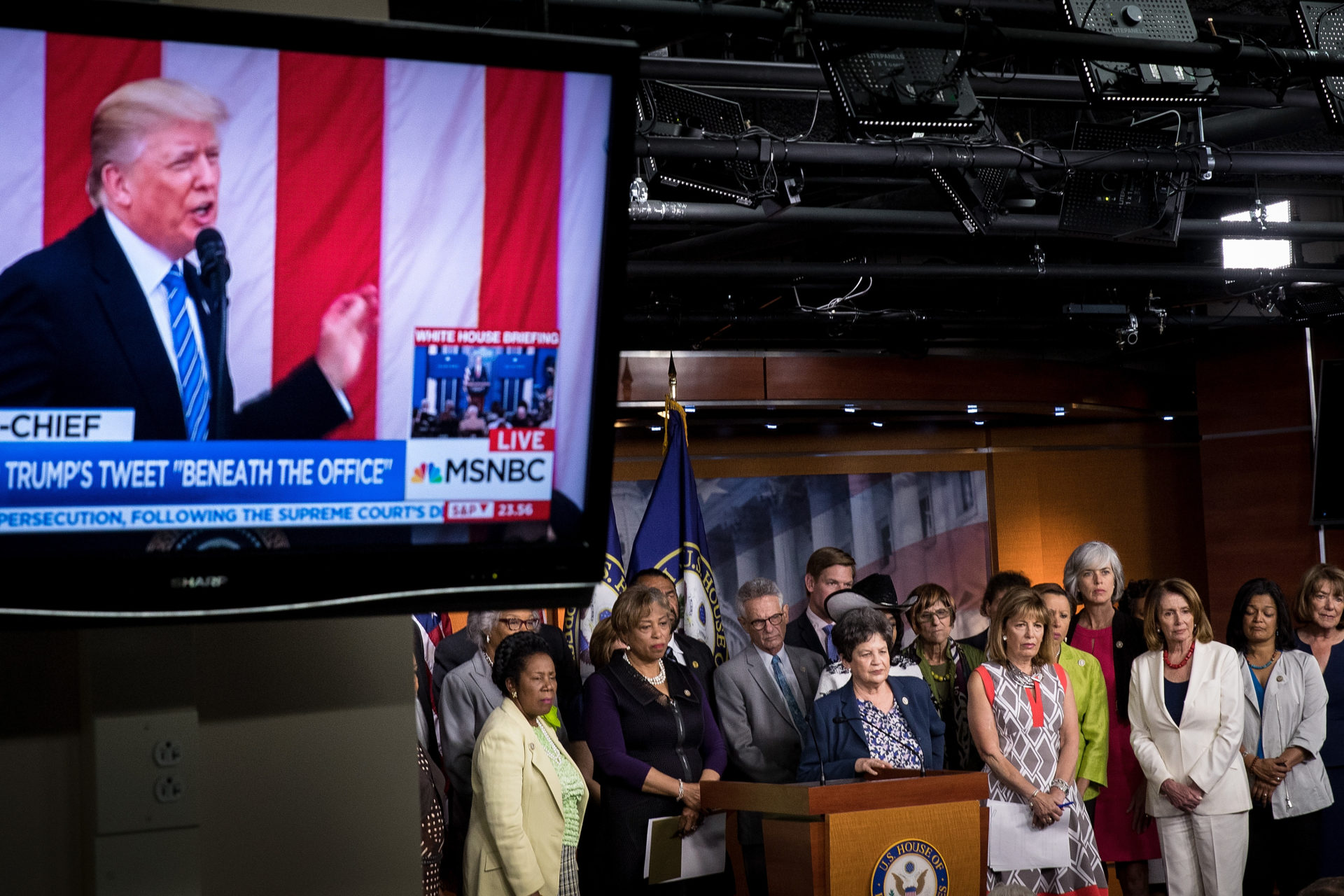 With President Donald Trump displayed on a TV monitor, House Democrats hold a news conference about the president's controversial tweets, on June 29, 2017, in Washington. In a Morning Consult poll, 72 percent of people who said that they'd heard anything about Trump's tweets encountered them on TV or cable news. (Drew Angerer/Getty Images)
By Sam Sabin

In the Trump administration, Twitter has become the official place to catch the president’s immediate thoughts on Washington’s news cycle, whether it’s about American military conflicts or White House personnel changes.

But despite Twitter’s relatively small user base compared to its competitors, a vast majority of voters say in a new Morning Consult survey that they’re aware of President Donald’s Trump’s tweets — and coverage from television and cable news outlets is the main reason.

According to a Morning Consult survey, conducted Jan. 13-15 among 1,996 registered voters, most of the electorate (94 percent) said they have seen, read or heard something about President Donald Trump’s tweets. And among that group, 72 percent said they learned about the tweets from television and cable news channels — about 2.5 times the share of those who said they’d heard about them on Twitter (29 percent). 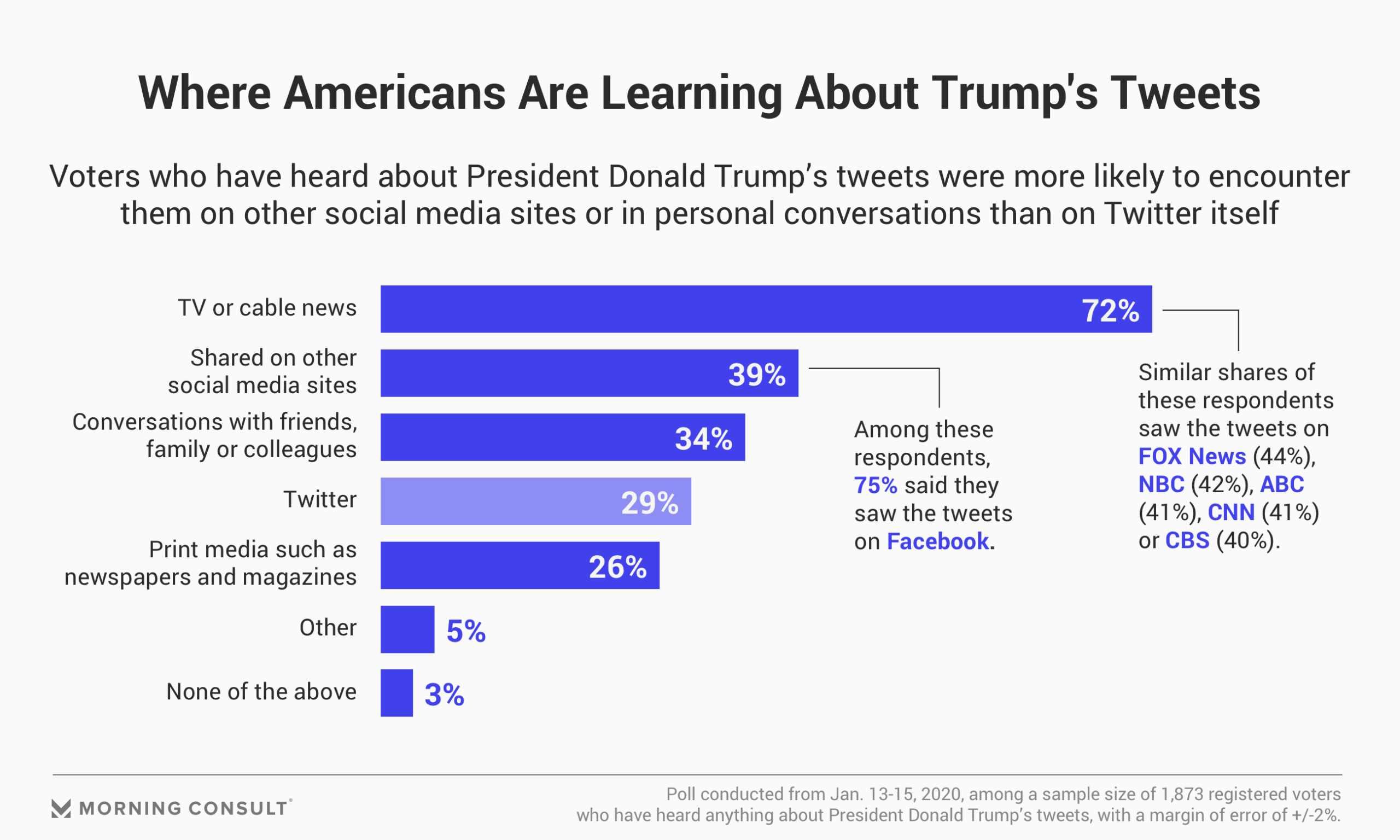 Those who heard about them on TV and cable news said they were slightly more likely to cite Fox News (44 percent) as a source, but the other networks were not far off, with NBC at 42 percent, ABC at 41 percent, CNN at 41 percent and CBS at 40 percent. The margin of error for the survey is 2 percentage points.

Also, more people said they heard about the tweets from other social media sites (39 percent) and conversations with friends, family and colleagues (34 percent).

Republican digital strategist Eric Wilson noted that Twitter’s user base is much smaller than that of other social media platforms so it makes sense that people are encountering Trump’s tweets elsewhere. In its latest earnings report, Twitter Inc. reported having 145 million monetizable daily active users in the third quarter of 2019, while Facebook reported more than 10 times that amount during the same period, with 1.62 billion daily active users.

Of the 39 percent who said they saw the posts on other social media sites, 75 percent said Facebook was the source, 32 percent said YouTube and 28 percent said Instagram.

Those numbers highlight that the content of the message is more important than the medium, Wilson said. “In terms of where you’re trying to drive messages, you’re not reaching lots of people on Twitter, but because it’s becoming amplified, it becomes an important channel,” he said.

Voters don’t typically remember official statements from the commander-in-chief, whether it’s Trump or Barack Obama, he said, but “we all know the Trump tweets.”

Rory McShane, a Las Vegas-based Republican digital strategist, said the power of Trump’s tweets has little to do with the fact that the statements are appearing on Twitter, and more to do with the power of the president himself and how he uses a platform designed for real-time updates.

“In the old days, you send out a press release, and it’s a page long, and if you’re lucky, the media will pull one sentence out of it into the evening news broadcast,” McShane said. But on social media, he said, Trump can have “all of his supporters rallied up, ready to go charge the Hill and his opponents” in a matter of minutes.

And McShane said that strategy is effective because of the personal voice Trump uses in his tweets, which is designed to appeal solely to his base — not to voters overall or to the Washington insiders, who are more likely to criticize his tweets.

“The tweets may piss off the guy drinking a Starbucks, but they rile up the guy driving the Ford F-150,” McShane said. “And American politics is increasingly now about finding your base and motivating them to come to the polls.”

When it comes to how people will vote in the 2020 presidential election, Trump’s tweets don’t appear to be a driving force for any voters, no matter their political party. Most voters (69 percent) said if Trump were to stop tweeting, it would make no difference to their vote in the 2020 presidential election — with little variation between Democrats (70 percent), Republicans (71 percent) and independents (66 percent).