After figures on diversity in award show nominees and winners were given, share of concerned adults rose 9 points

In this handout provided by A.M.P.A.S., Oscar statues are seen backstage during the 91st Annual Academy Awards at the Dolby Theatre on Feb. 24, 2019, in Hollywood, Calif. In a recent survey, respondents were much less likely to say that women received a fair amount of nominations after being informed of the actual numbers. (Matt Petit - Handout/A.M.P.A.S. via Getty Images)
By Sarah Shevenock

After incremental progress on diversity in recent years following 2015’s #OscarsSoWhite campaign, this year marked the return of a predominantly white group of acting nominees and an entirely male group of directing nominees to contend for the Academy’s gold statuettes. While previous polling has shown that U.S. adults generally have little concern for Hollywood diversity, a new survey finds the public changes its opinions when confronted with the real nomination and win numbers for the Oscars.

A Jan. 16-18 Morning Consult/The Hollywood Reporter survey asked 2,200 U.S. adults about their concern regarding diversity in the entertainment industry. A slim majority — 53 percent — said they were not concerned about the issue, while 54 percent said they were not worried about diversity among awards show nominees and winners.

The poll’s margin of error is 2 points. The subsamples of women, Hispanics and African Americans have margins of error of 3, 5 and 6 points, respectively.

When nominations for the 92nd Academy Awards were announced Jan. 13, the homogenous make-up of nominees in the acting categories (just one person of color was nominated) and the directing category (no women were nominated) drew backlash from online commentators and those within the industry, including presenter Issa Rae. “The Academy needs to do better,” she told CNN.

The poll showed that few people had a good sense of how different groups were represented in awards categories. The survey asked respondents how many individuals from different identity groups received nominations for best directing from 2016 to 2020. Twenty-eight percent said that two or three women had received nominations over that time period, while a quarter said four or five women had been nominated in the best director category.

Related: Plurality Thinks There Are Enough Diverse Roles in Hollywood

Though acting categories in 2015 and 2016 were exclusively white, five of the 12 acting winners from 2017 to 2019 — Viola Davis, Mahershala Ali (who won twice), Regina King and Rami Malek — were racial or ethnic minorities. Twenty-three percent of respondents correctly guessed this, saying that four or five of the winners belonged to that category, while 34 percent said it was two or three. 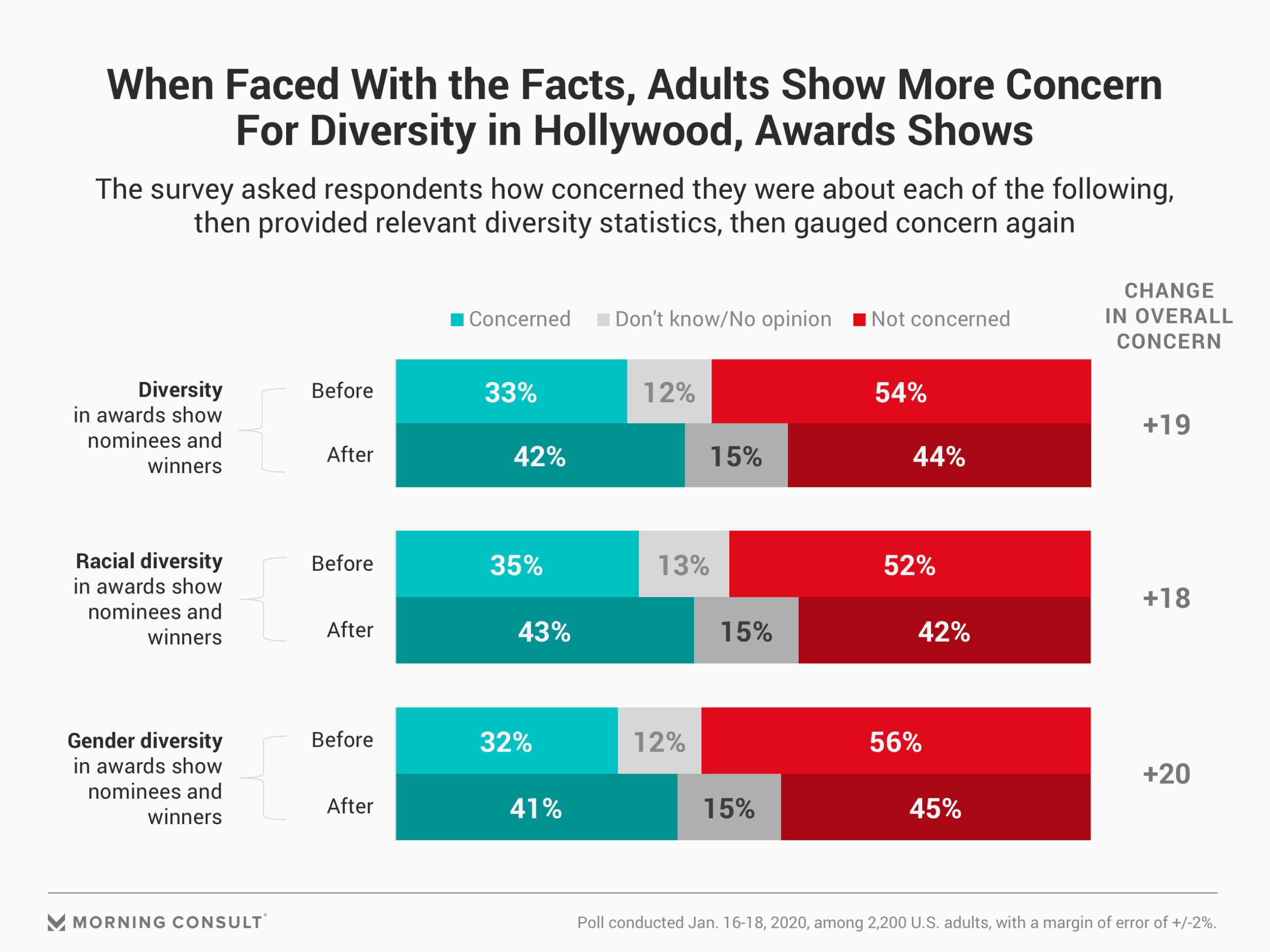