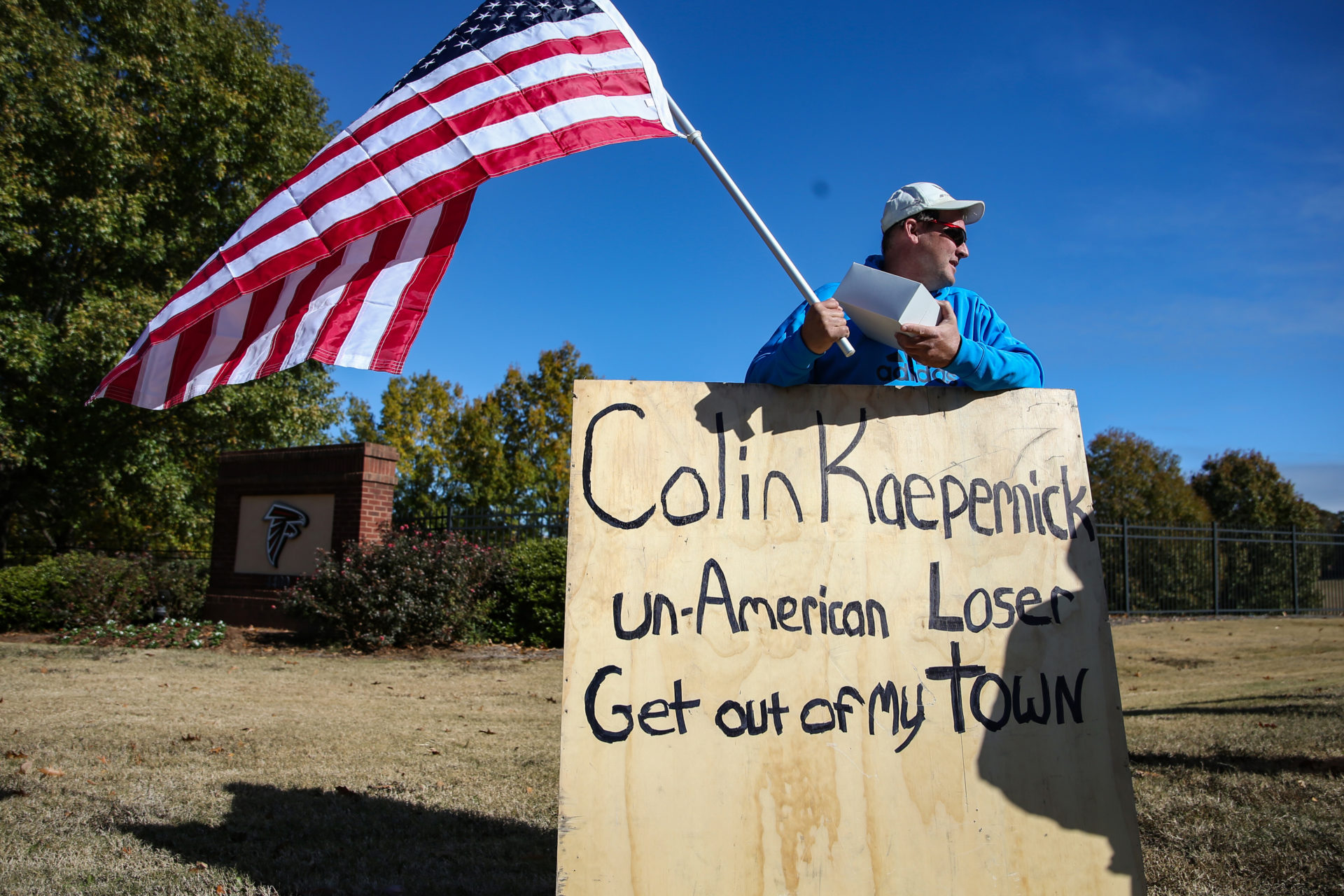 A man protests outside of the training facility where Colin Kaepernick conducted in a private NFL workout is being held on Nov. 16. Morning Consult tracking data finds Republicans antipathy toward the NFL has faded as the political firestorm over kneeling has faded. (Carmen Mandato/Getty Images)
By Alex Silverman

Almost two and a half years after President Donald Trump chastised NFL players for kneeling during the national anthem, the NFL’s reputation — particularly among Republicans — is still recovering.

Heading into Super Bowl LIV, the league’s net favorability among U.S. adults is at its highest point since before the 2017 season, according to Morning Consult Brand Intelligence data, when the league found itself in the crosshairs of a culture war over players’ on-field protests against racial injustice in America. While the kneeling trend started during the 2016 season with then-San Francisco 49ers quarterback Colin Kaepernick, the controversy exploded when Trump rebuked players during a rally in Alabama prior to Week 3 of the 2017 season, a line of attack he would continue with 13 NFL-related tweets during the next week. 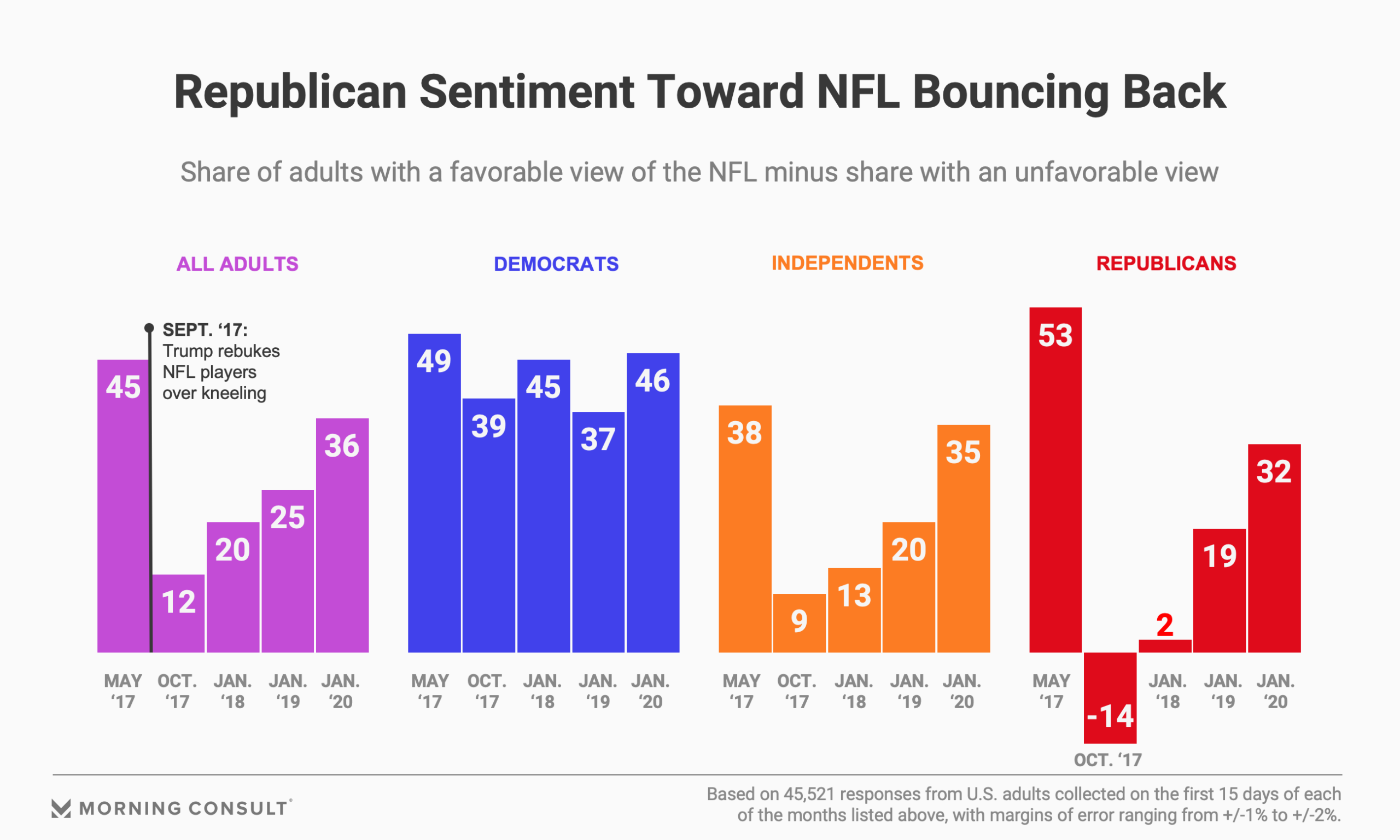 The NFL’s net favorability — the share of the population with positive opinions about the league minus the share with negative opinions about it — declined across the board during the 2017 season, but the fall was most significant among those identifying as Republicans. In May of that year, GOP sentiment toward the league, at plus 53 percentage points, was more favorable than that of Democrats (plus 49 points) or independents (plus 38 points).

During the first two weeks of October — shortly after Trump’s tweets — the league’s net favorability among Republicans was minus 14 points, representing a 67-point drop from earlier in the year. Among all adults, net favorability fell 33 points in the aftermath of Trump’s tirade, to plus 12.

Over the past two-plus years, Republicans have warmed back up to the league, Morning Consult tracking data shows. By January 2018, net favorability among Republicans toward the NFL was back above water at plus 2 points. A year later, GOP sentiment toward the NFL among Republicans had increased to plus 19. This month, the share of Republicans with a favorable view of the NFL is 32 points greater than the share with an unfavorable view of the league, a high-water mark in the league’s recovery within the GOP. Among all adults, net favorability now sits at plus 36, also its best figure since before the 2017 season.

While Republicans were slightly more enthusiastic about the NFL than Democrats prior to Trump taking a stand against the league in 2017, Democrats, at plus 46, now hold the league in significantly higher regard than Republicans. Sentiment toward the league among Democrats and independents is also at its highest point since May 2017.

Television viewership trends also reflect the league’s improved sentiment over the past two seasons, as the NFL said it notched its first back-to-back annual ratings increases since 2010. The 2019 season, in which viewership rose 5 percent year over year to an average of 16.5 million viewers per game, was the NFL’s best on TV since it posted the same figure in 2016. The league also continues to dominate all other programming, regardless of genre, scoring 16 of the top 20 most-watched telecasts of 2019.

Political persuasion and national anthem protests aren’t the only factors that have influenced the NFL’s perception and performance on TV over the past several seasons. The league has benefited from the emergence of young stars, such as Kansas City Chiefs quarterback Patrick Mahomes and Baltimore Ravens quarterback Lamar Jackson, as well as a decline in head injuries and the implementation of rules that have resulted in higher scoring.

While tracking data shows the NFL’s standing among Republicans is weaker than among Democrats, GOP adults are about as likely to watch Super Bowl LIV as their peers across the aisle. According to a recent Morning Consult/CMO Today survey, 48 percent of Democrats said they are “very likely” to watch the big game, compared to 47 percent of Republicans. Independents are significantly less likely than their partisan peers to watch the Super Bowl at only 37 percent, according to the Jan. 6-11 survey of 4,399 adults, which had a 1-point margin of error.

This year’s Super Bowl will feature an extra dose of politics in the form of national advertisements from the presidential campaigns of both Trump and former New York City Mayor Michael Bloomberg. Republicans and Democrats both believe that the Super Bowl isn’t an appropriate platform for political candidates to advertise. Among Republicans, 54 percent said political advertisements are “not appropriate at all” during the Super Bowl, an opinion also held by 35 percent of Democrats.