How Endorsements Could Shape a Narrowing Democratic Presidential Field

Only Biden’s exit would restructure the race, polling experiment shows, but other candidates could make waves

If past election cycles are any indication, the Democratic presidential field should begin to narrow at some point in the next month or so. That has backers of the two leading candidates, former Vice President Joe Biden and Sen. Bernie Sanders (I-Vt.), trying to determine how their first choice could benefit from the potential exit of prominent contenders like former South Bend Mayor Pete Buttigieg of Indiana and Sen. Elizabeth Warren of Massachusetts, whose campaigns have attracted significant support.

And while “second-choice” data goes some way to predicting how those exits may reshape the race, it doesn’t account for how a departing candidate would impact the standings by putting his or her own finger on the scales with an endorsement. In a new polling experiment, Morning Consult sought to test the latter’s potential effect on a narrowing field.

In a Jan. 16-22 survey, 1,659 Democratic primary voters — registered voters who indicated they may vote in the Democratic primary or caucus in their state — were asked two questions to try and ascertain how the cards could fall if the race’s top polling candidates were to end their bids. First, voters who were solidly behind one candidate were asked whom they would support if their first choice dropped out. Then they were asked whether they would heed an endorsement call from their preferred candidate.

Responses to the first question indicate that only Biden’s exit would dramatically restructure the contest for the party’s nomination to take on President Donald Trump in November, but things would tighten if one of the other top candidates dropped and all else stayed the same.

Warren’s exit, for example, would lift Sanders’ first-choice support close to that of the former vice president, while a Sanders exit would solidify Biden’s front-runner status while also providing a boost to Warren’s first-choice support. On its own, Buttigieg’s supporters would spread almost evenly among the candidates if he drops out of the race, while former New York City Mayor Michael Bloomberg’s exit would be more likely to provide a bump to Biden. 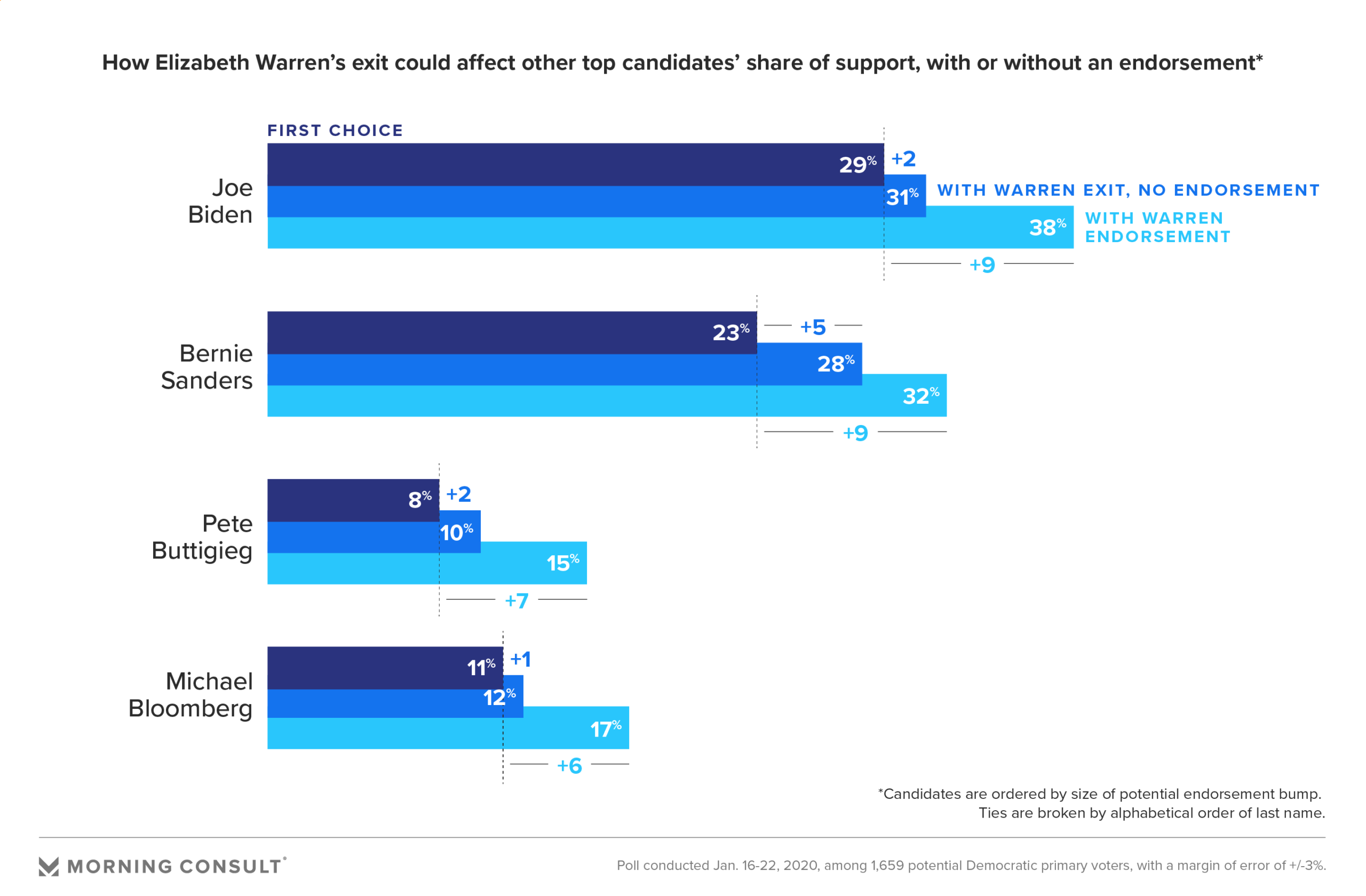 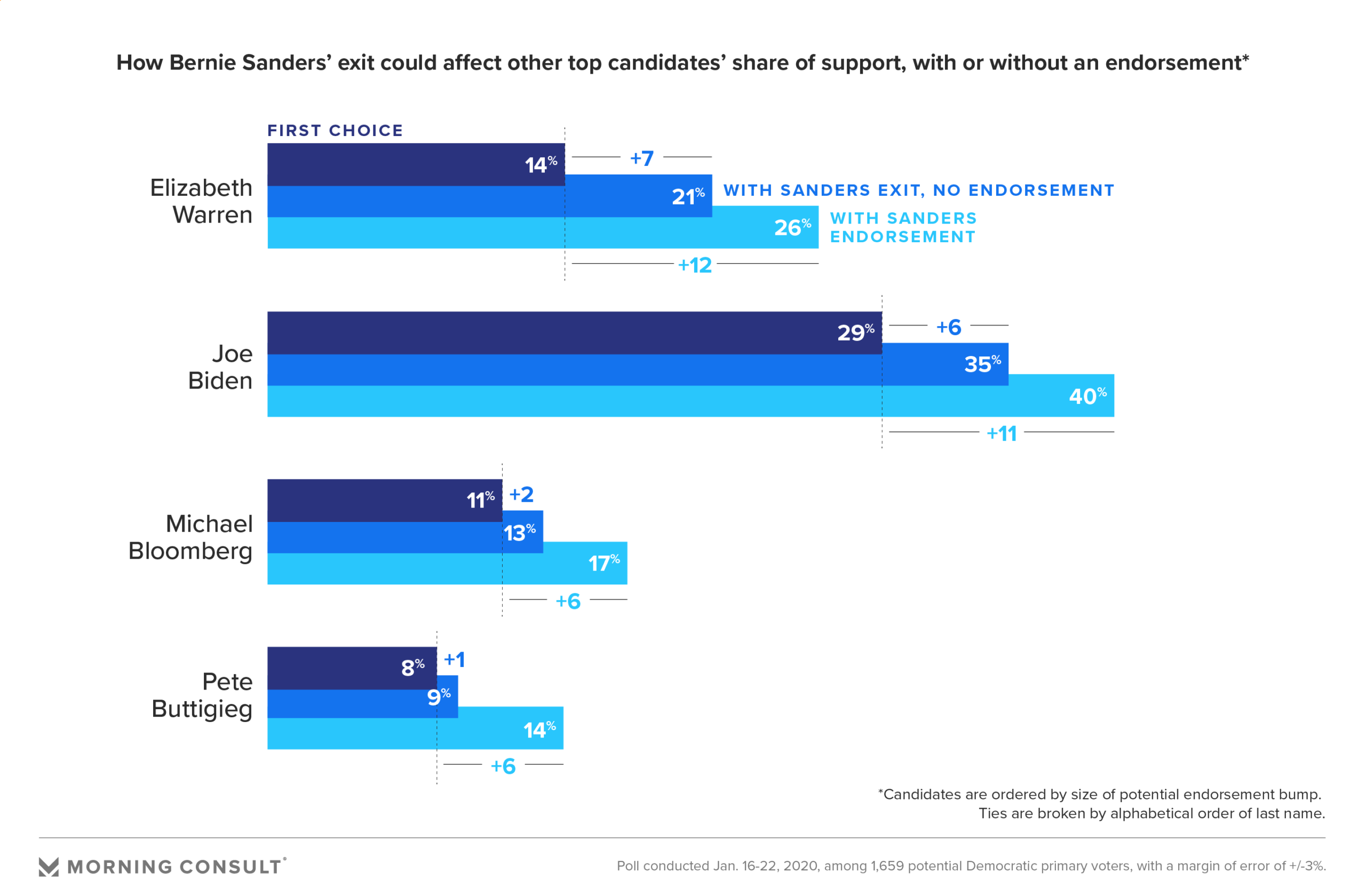 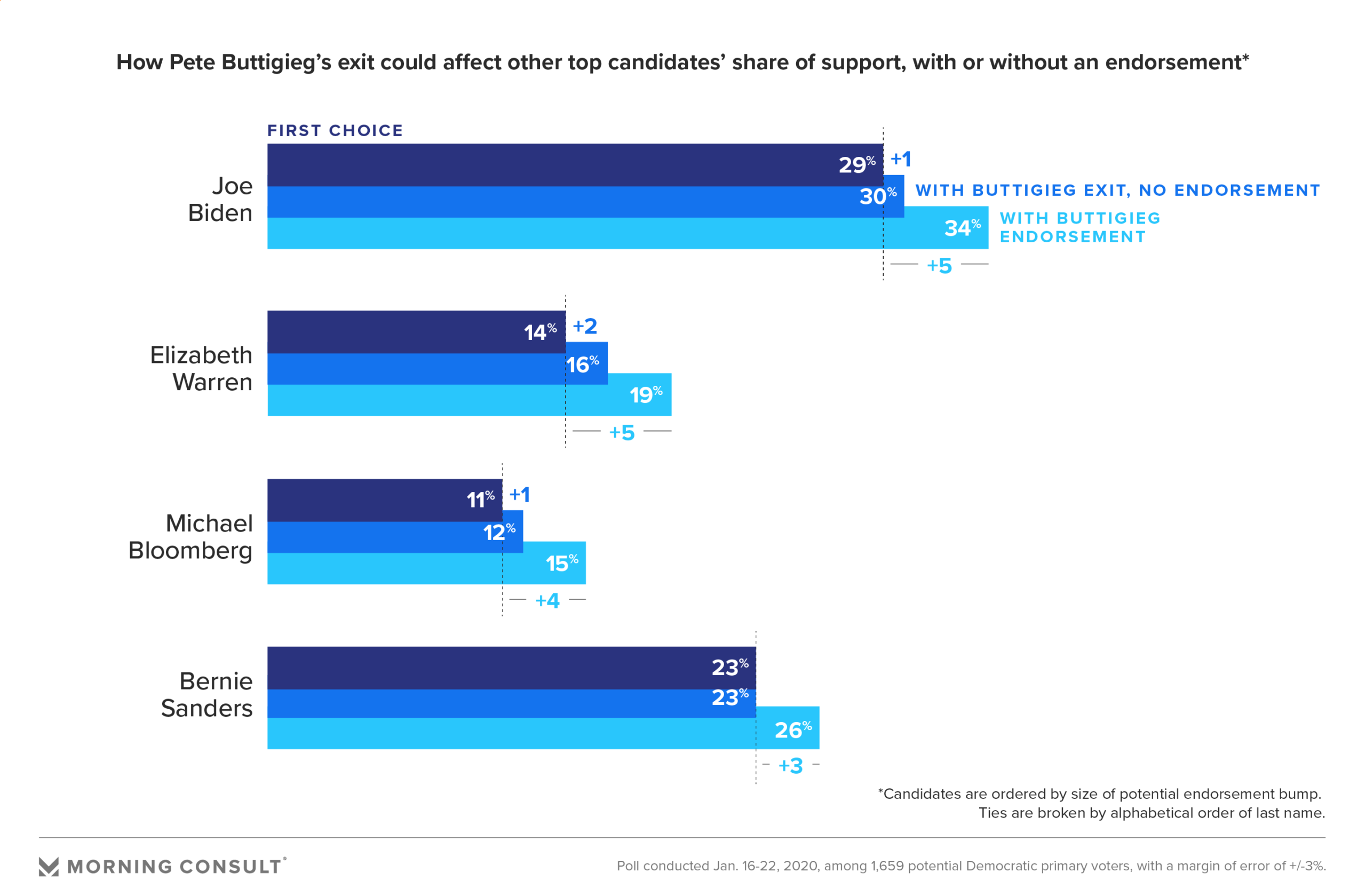 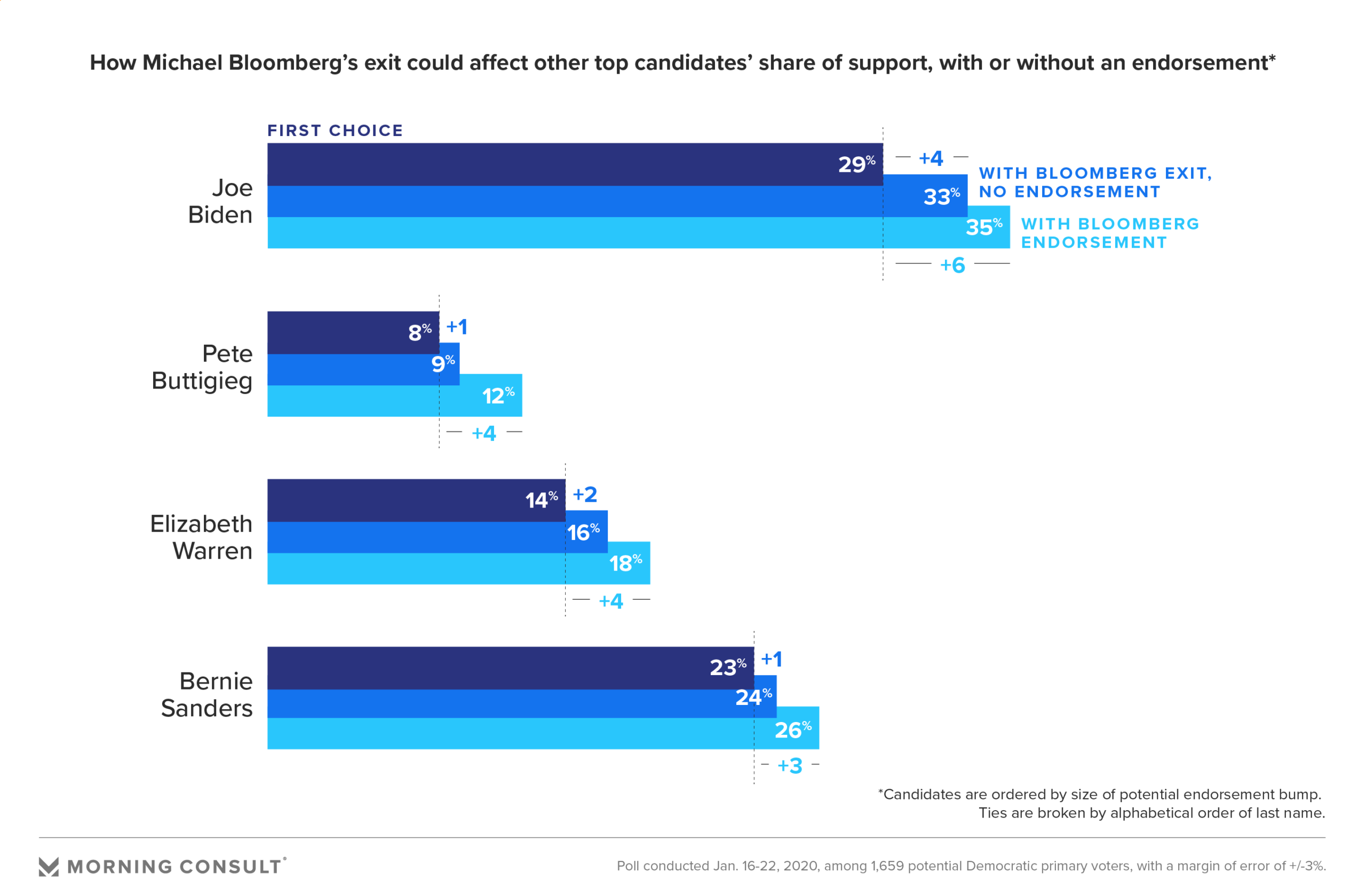 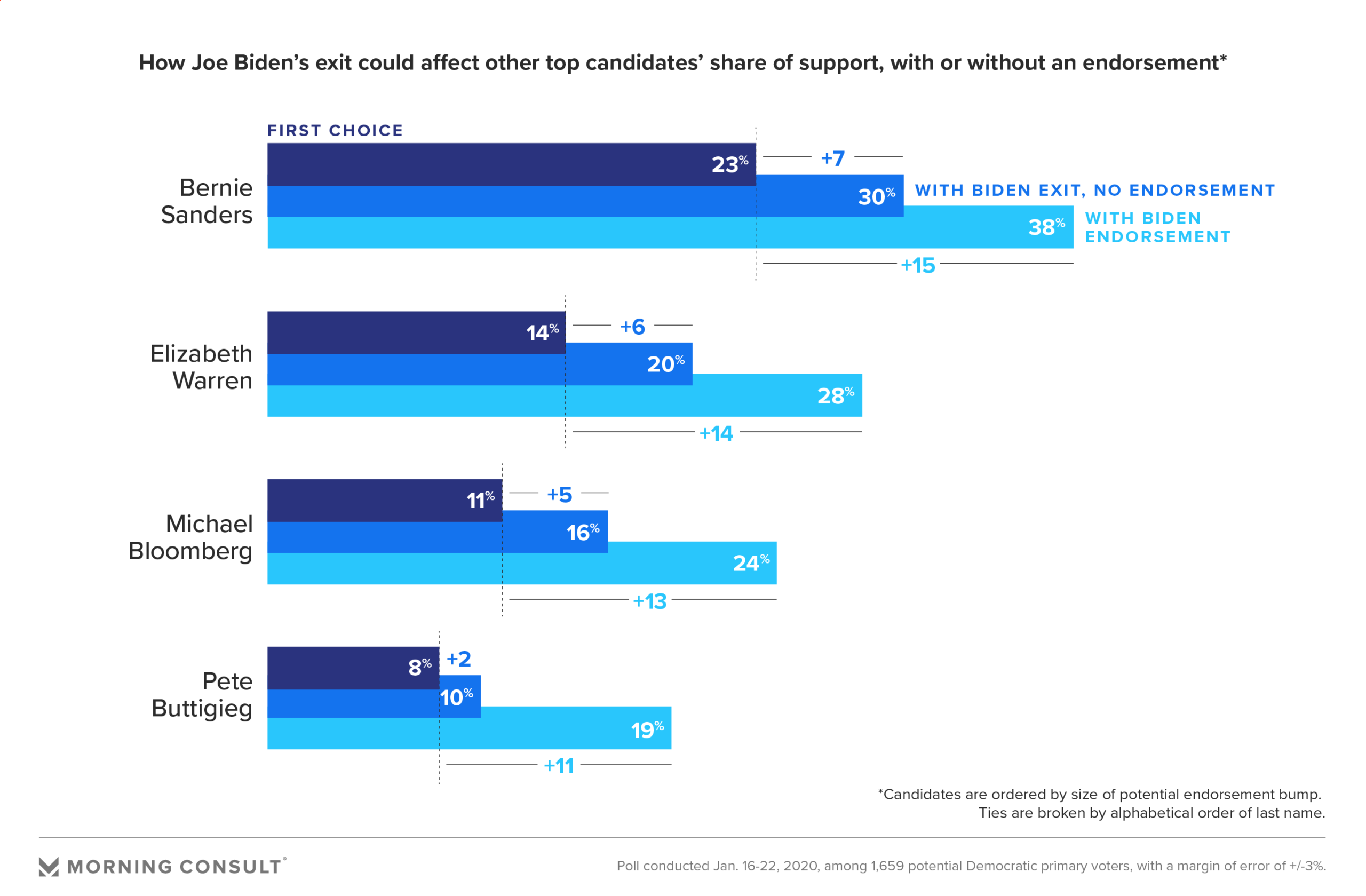 And hypothetical endorsements generally had a greater impact when they came from and were aimed at higher-polling contenders. Candidates with higher first-choice support were most likely to reap rewards from endorsements than lower-polling candidates, due in part to more voters saying they either didn’t know about the others or would support someone else. The poll accounted only for a possible endorsement’s positive impact, not a post-endorsement drop-off in support for other candidates.

No major campaign has signaled it will end if it experiences a poor showing in early states. Bloomberg in particular is banking his campaign on nominating contests that come after the first four states.

And Warren’s campaign has notably sought to defuse any talk of a potential exit if things don’t go well for her in the early states. Roger Lau, her campaign manager, said in a Jan. 24 post on Medium that the “four early states contests are just the beginning,” and that the campaign expects to sustain “well past Super Tuesday and stay resilient no matter what breathless media narratives come when voting begins.”

Nonetheless, her endorsement would have a powerful impact. Warren’s supporters, who made up 14 percent of the sample, follow her lead near-equally if she were to endorse either Sanders or Biden. A bump of 9 percentage points for Sanders would significantly tighten his margin on Biden, putting him at 32 percent first-choice support. A Warren endorsement for Biden, meanwhile, lifted the former vice president to 38 percent.

The same dynamic exists for Warren and Biden if Sanders were to exit the race and endorse one of them, though Sanders’ departure and subsequent backing would have a slightly stronger impact (plus 11 points) due in part to his larger share of first-choice support. Biden had 40 percent support with a hypothetical Sanders endorsement, compared with 26 percent for Warren.

The impact of an endorsement on supporters of Buttigieg would be felt almost evenly (plus 4 or 5 points) among the top candidates who could remain in the race after his exit. The same dynamic (plus 4 or 6 points) is true for Bloomberg.

Biden has consistently led the Democratic primary, but his departure and subsequent endorsement would be a game changer. The polling found that his endorsement has the potential to essentially tie Warren with Sanders, at 28 percent, or to propel Sanders to first place, with 38 percent.