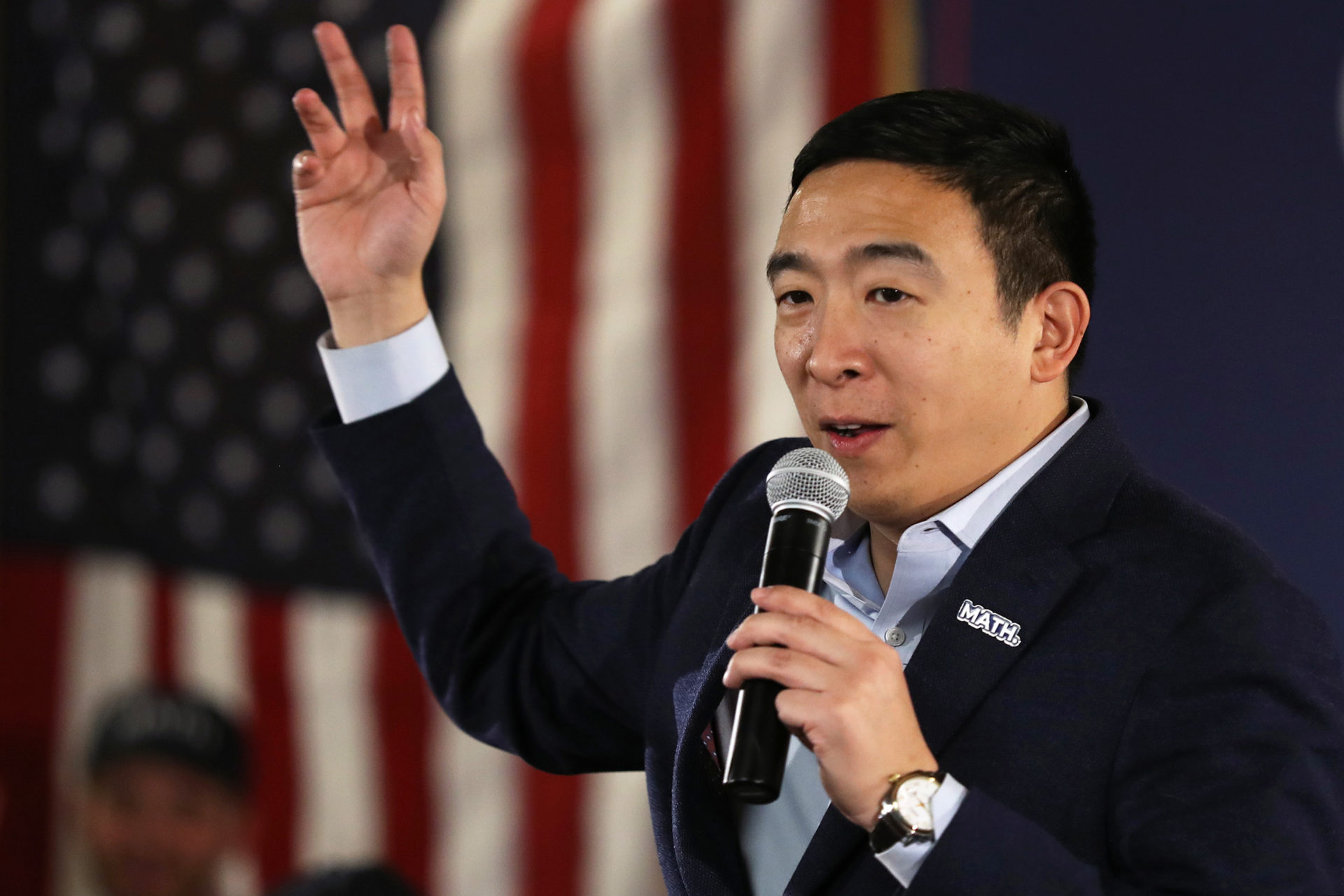 When tech entrepreneur Andrew Yang announced his presidential run in 2018, few knew his name — including those in the tech industry from which he hails. Despite that, Yang’s campaign is one of 11 that has made it to the Iowa caucuses, the election’s first performance review, even as several establishment candidates, such as Sens. Kamala Harris (D-Calif.) and Cory Booker (D-N.J.), have already dropped out.

While Yang, who has been polling consistently between 3 and 5 percent in Morning Consult’s nationwide surveys since September, is a long shot to win the Democratic nomination, experts say the political newcomer has sustained his efforts in a candidate pool that once contained over two dozen candidates by siphoning off a sliver of progressive candidates that few Democrats have ever catered to: those under the age of 45 who are hungry for government policies to address how technology is challenging American society.

“The issues that are top of mind for him are not the tell-tale political issues that politicians have been fighting for a long time,” said Betsy Hoover, the former online organizing director for the Obama 2012 campaign and co-founder of Higher Ground Labs, an incubator for progressive political tech startups. Yang’s focus, she noted, is on “issues that are facing society today” — notably those that stem from advancements in the tech sector.

Yang’s platform hinges on two proposals to mitigate the impact of tech on society: implementing a universal monthly basic income of $1,000 for every American funded by a tax on technology companies, and a promise to address the rise of automation so workers don’t lose jobs as the technology evolves. Hoover says that platform speaks to the growing voter interest in regulations for the tech industry and a desire to elect those with technology backgrounds that can speak to that.

And Jon Reinish, a Democratic strategist and managing director at SKDKnickerbocker, said that’s clearly appealing to younger, tech-savvy voters, considering the makeup of Yang’s voter base. 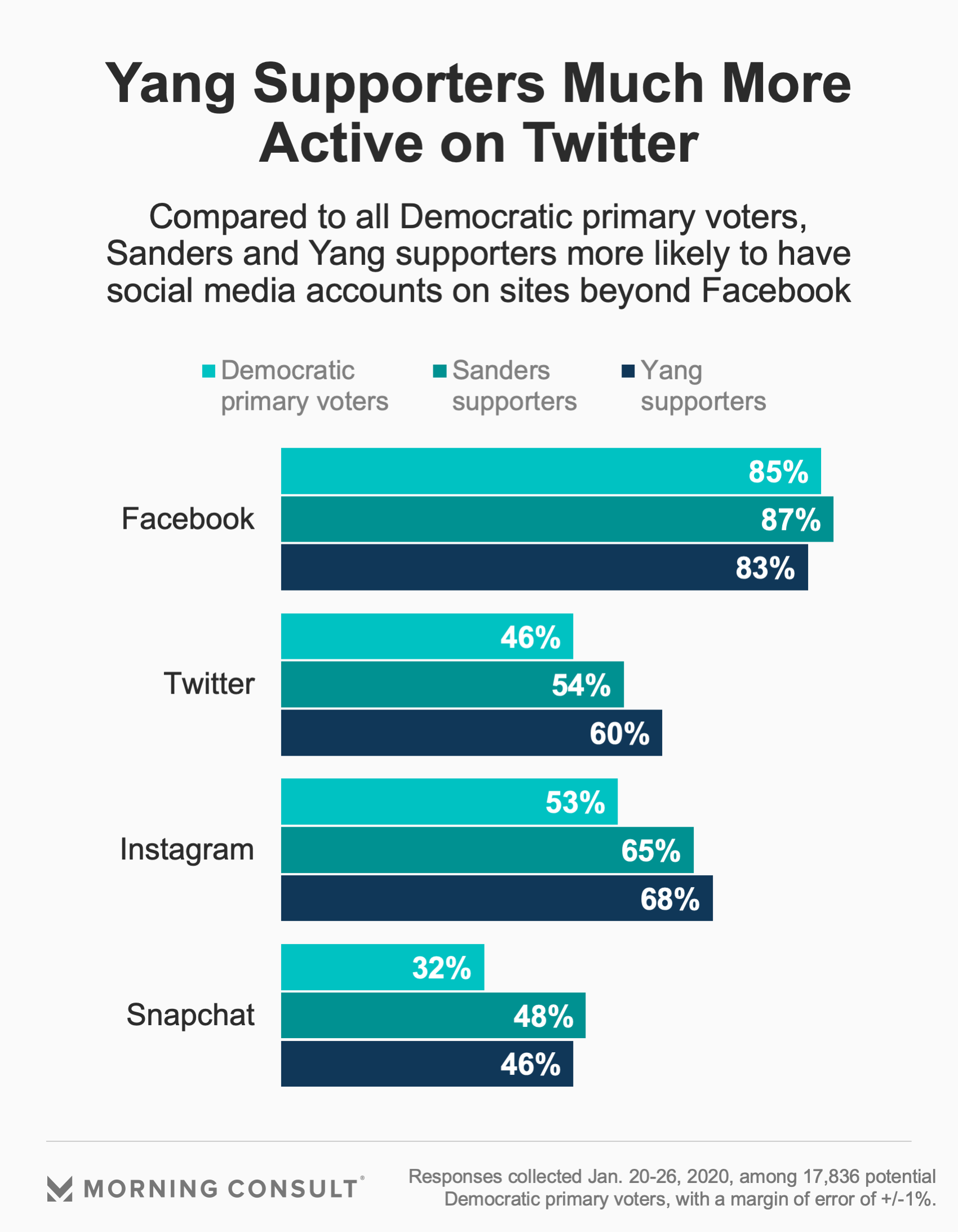 Compared to the average potential Democratic primary voter, Yang’s supporters tend to sway younger, are more likely to name the economy as their top issue and have a more expansive social media presence, according to Jan. 20-26 Morning Consult polling tracking the Democratic primary.

Of the 735 voters who named Yang as their first-choice candidate, 71 percent are under the age of 45, 32 percent identify the economy as their top issue, and 60 percent are on Twitter.

Supporters of Booker and more established candidates tend to more closely resemble the overall makeup of the survey’s 17,836 Democratic primary voters, of whom 42 percent are under the age of 45, 22 percent named the economy as their top issue and 46 percent are on Twitter. About half of both Yang supporters and Democratic primary voters overall said they made less than $50,000 each year.

“Andrew Yang is showing Democratic primary voters that he is a different type of leader who truly understands the problems facing America,” said S.Y. Young, national press secretary for the Yang campaign, in a statement. “No other candidate speaks as eloquently on the economy, race, families with children with disabilities, or the influence of money in politics.”

Much of Yang’s success could be attributed to his ability to build a voter base similar to that of Sen. Bernie Sanders (I-Vt.), who currently has 23 percent of first-choice support, according to the Morning Consult tracking data, and trails front-runner former Vice President Joe Biden by 6 percentage points. There are, however, a few, but notable differences: Most of Sanders’ voters have an annual income that’s less than $50,000 (60 percent), and they’re more likely to identify as “very liberal,” at 25 percent. And men make up a larger share of Yang’s base (58 percent) than Sanders’ (48 percent).

Yang supporters are also just as inclined as the broader Democratic primary electorate to say they’re either “extremely” or “very” politically interested in the election, though a slim majority (53 percent) say so. That puts his supporters more in line with those who back Biden and former New York Mayor Michael Bloomberg.

Thirty-two percent of Yang supporters named Sanders as their second-choice nominee if Yang were to drop out of the race, followed by 14 percent who picked Sen. Elizabeth Warren (D-Mass.) and 12 percent who said Biden. 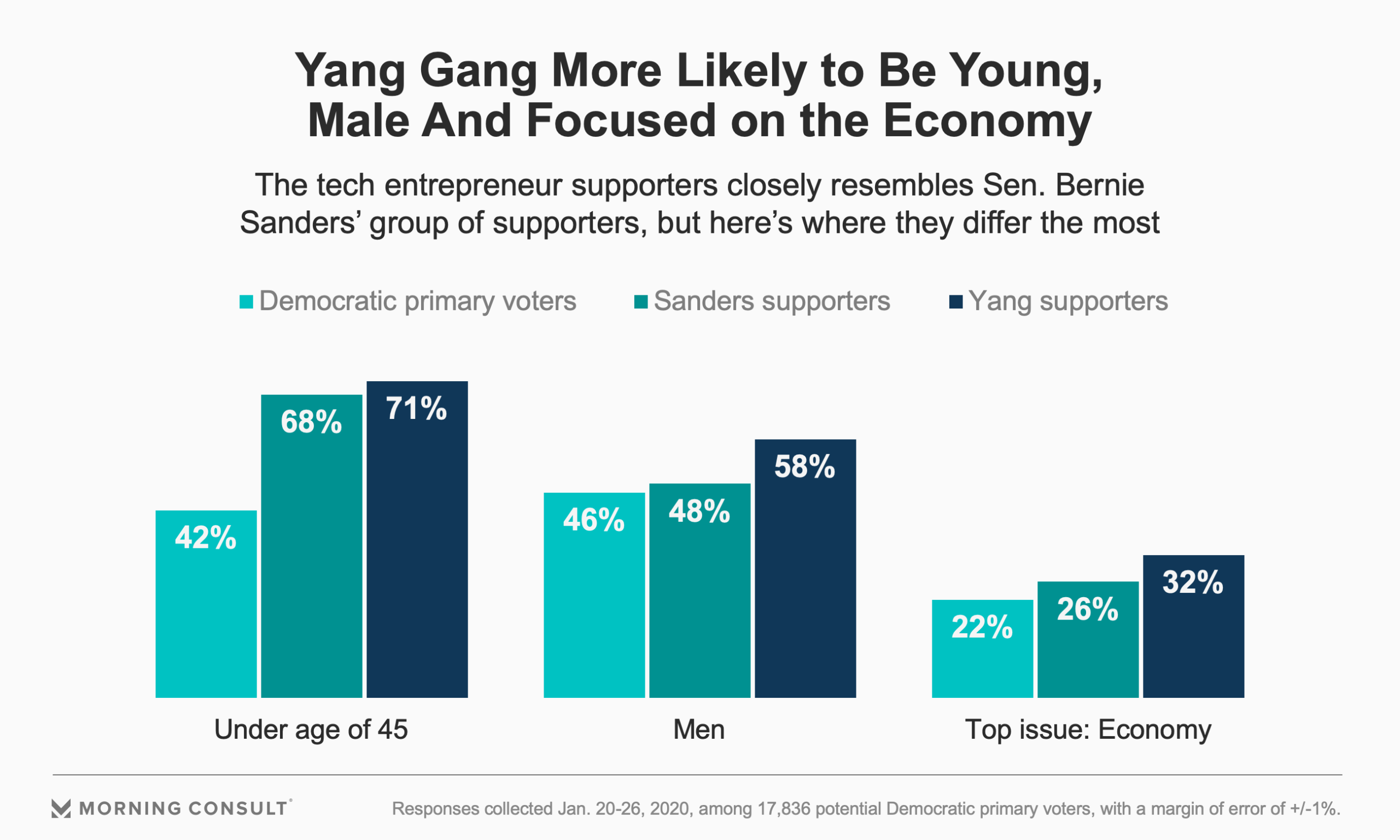 Although Yang’s ideas to address the societal issues caused by technology have made him attractive to his base, Hoover said his ideas alone aren’t fueling his loyal online following, also known as the “Yang Gang.” Instead, she said, it’s Yang’s relatability to his donors as a tech entrepreneur that has kept him in the race: More than 70 percent of those who donated to Yang’s campaign in the first three quarters of 2019 were men, according to a Center for Responsive Politics analysis of Federal Election Commission data, and many of them worked for large tech companies like Alphabet Inc., Amazon.com Inc., Microsoft Corp. and Facebook Inc. For instance, Alphabet workers have donated $66,815 to Yang so far – the largest amount from employees at any one company to his campaign.

Though experts don’t expect Yang to last beyond the first four primary states, his campaign indicates that voters have an increasing appetite for tech industry regulation. Dipayan Ghosh, co-director of the Digital Platforms and Democracy Project and Shorenstein fellow at the Harvard Kennedy School, said that most people in Silicon Valley are relatively unknown, opening the door to candidates in the tech industry so long as they’re willing to regulate tech. But he warned that powerful, better-known tech entrepreneurs such as Facebook’s Mark Zuckerberg would have a tougher time on the campaign trail as Washington’s “techlash” continues to push forward.

And while Yang’s tech platform and background have set him apart from the pack of Democratic primary candidates, Reinish noted his relatively low polling numbers show his ideas haven’t been challenged much by other candidates or voters, so it’s unclear how much staying power they have.

Although that could change as Yang continues to qualify for presidential debates, including the Feb. 7 event in New Hampshire. How Yang handles the heat could impact how future tech leaders run for public office, Reinish said.

“People are looking at Andrew Yang and saying, ‘Let’s see how he does, and then we’ll look at ourselves and make a decision.’”