58% say they are concerned about the economic impact of coronavirus on U.S. economy, a 6-point rise in a week

At the John F. Kennedy Airport terminal that serves planes bound for China, airport employees wear medical masks on Jan. 31 in New York. Morning Consult polling shows that most U.S. consumers are worried about the economic fallout from the coronavirus, but not yet enough to change their travel plans. (Spencer Platt/Getty Images)
By Claire Williams

Economic fears about the coronavirus outbreak are growing as the virus spreads to the United States and continues to cause fatalities abroad, according to new Morning Consult data.

The coronavirus outbreak has battered Chinese financial markets and sparked fears of a global economic slowdown given China’s importance to the international economy. The impact on American markets has so far been limited, with the Dow Jones Industrial Average rebounding on Monday from Friday’s 603-point plummet.

And at least among consumers in the United States, fear that the virus will hit the economy is growing. 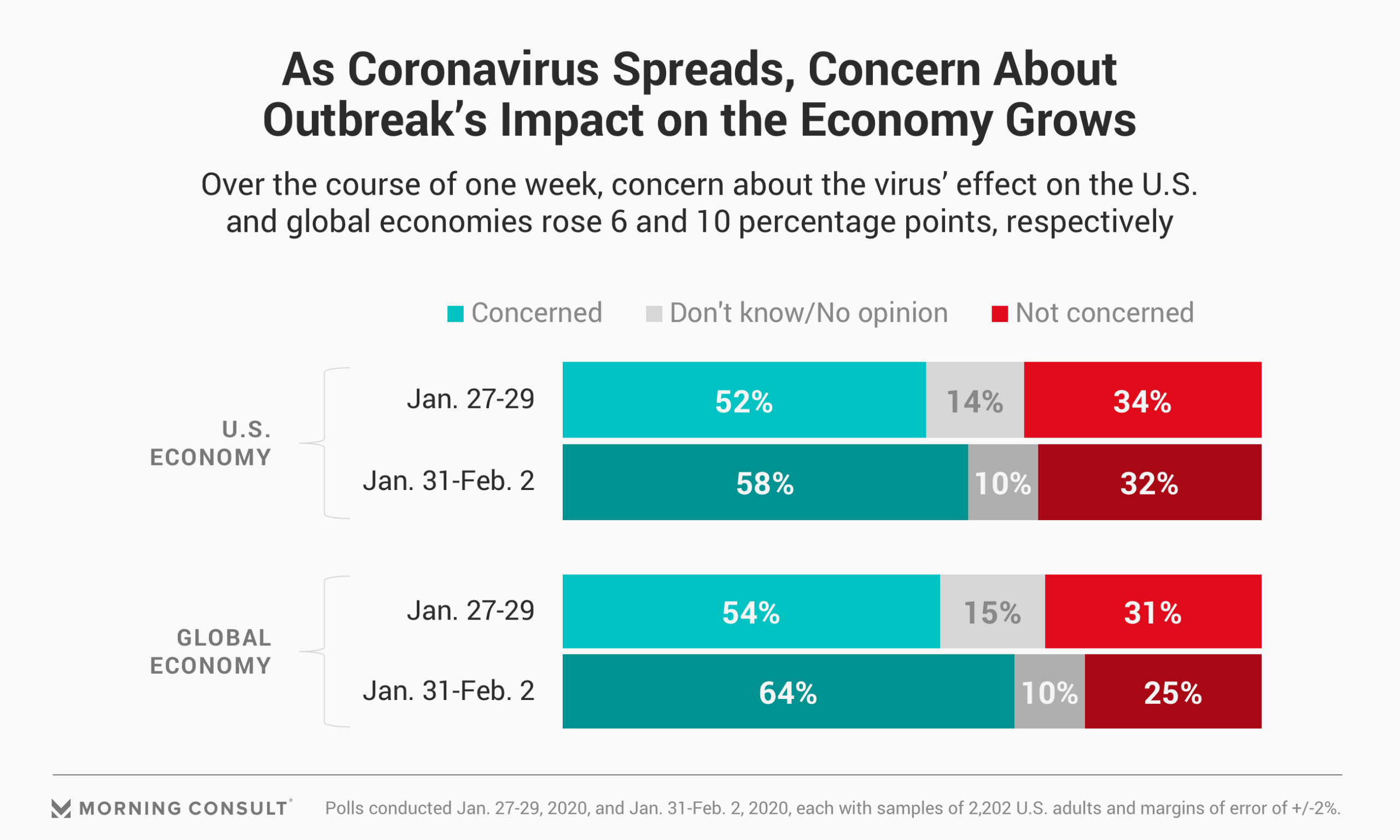 Fifty-eight percent of consumers said they were concerned about the impact of coronavirus on the U.S. economy, according to a new Morning Consult survey. The poll was conducted from Jan. 31-Feb. 2 among 2,202 U.S. adults and carries a 2 percentage point margin of error.

That’s a six-point bump from those who said the same last week. That poll surveyed 2,202 people from Jan. 27-29 and has a 2-point margin of error.

Concern for the global economy jumped 10 points between the two surveys. Sixty-four percent said they are worried about the world economy in the Jan. 31-Feb. 2 poll, compared to 54 percent in the earlier survey.

The rise in concern comes during a period in which the World Health Organization and the White House declared health emergencies and the first case of person-to-person transmission was confirmed in the United States. As of Monday, 11 people have been confirmed to have the virus in the United States, and the death toll in China has hit 361.

While fear that something could lead to a negative economic impact doesn’t necessarily mean that it will, it’s thought to be a contributing factor to economic downturns. For example, Yale economist and Nobel laureate Robert Shiller argues in his 2019 book, “Narrative Economics,” that worries about a recession can turn into a self-fulfilling prophecy.

So far, however, the most concrete economic impact the coronavirus outbreak has had in the United States is on the travel and leisure sector, with international flights being canceled and airline stocks plummeting.

In the latest Morning Consult survey, 17 percent of adults said they were less likely to travel within the United States in the next six months in light of the coronavirus outbreak. But that number is being driven by those who are unlikely to travel anyway.