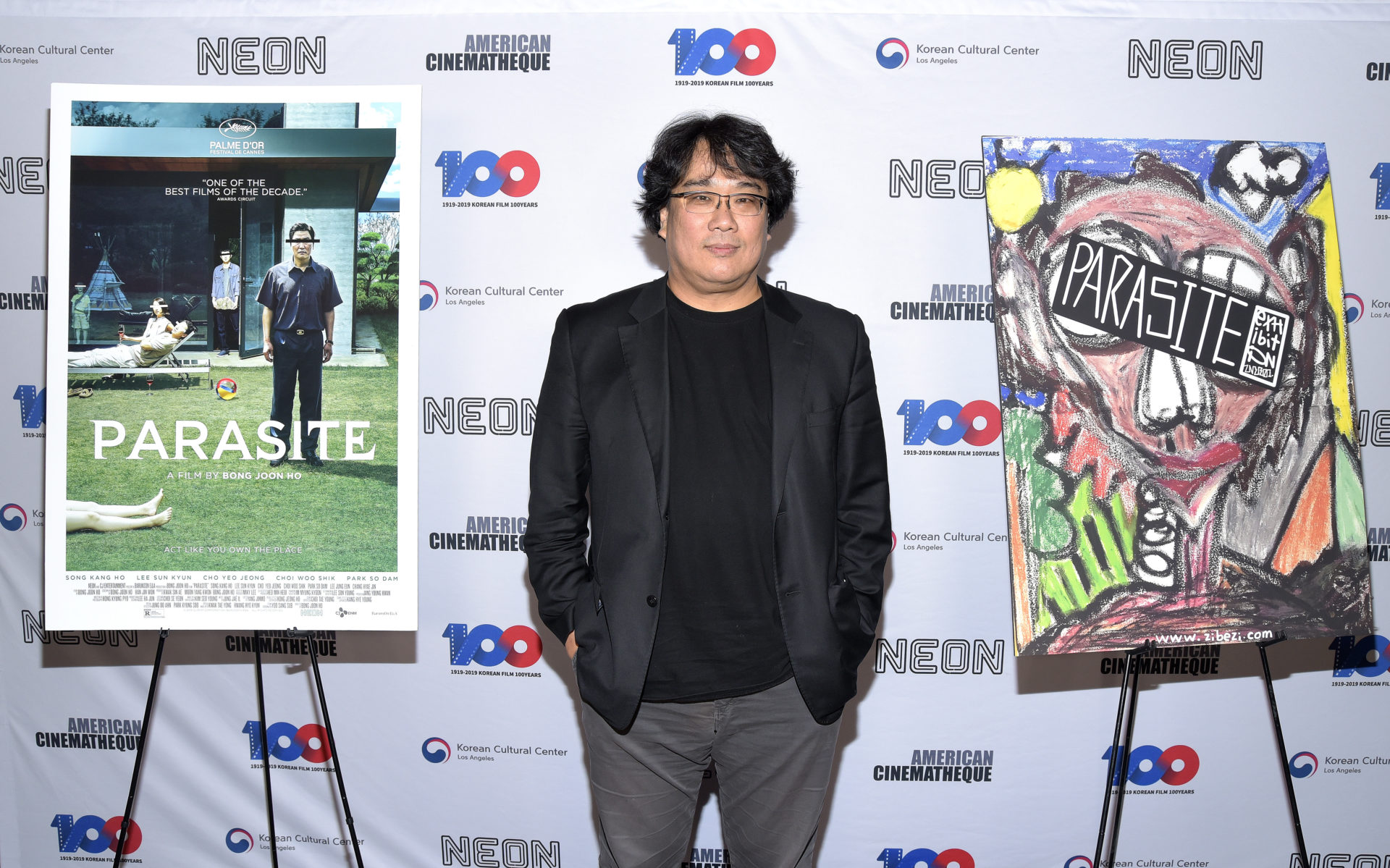 Director Bong Joon Ho attends "A Genre Of One: Bong Joon Ho", a feature retrospective presented by the American Cinematheque at The Egyptian Theatre on Oct. 30, 2019, in Los Angeles. Experts say films like Bong's "Parasite" could be changing the U.S. market for foreign cinema. (Photo by Michael Tullberg/Getty Images)
By Sarah Shevenock

“Once you overcome the one-inch-tall barrier of subtitles, you will be introduced to so many more amazing films.”

That was the message Oscar-nominated director Bong Joon-ho had for the audience when he accepted the Golden Globe for best foreign language film last month. But despite the attention his film “Parasite” has received, Morning Consult polling finds that foreign language films are the genre American audiences are least interested in — and that it’s most likely a resistance to subtitles that is preventing them from embracing international cinema.

A Jan. 23-24 Morning Consult survey of 2,200 U.S. adults found that when compared to other genres and types of films, foreign language films — defined for the survey as films that are produced outside of the United States where the primary language spoken is not English — were the least popular, with a net favorability (the share who felt favorably minus the share who felt unfavorably) of minus 25. 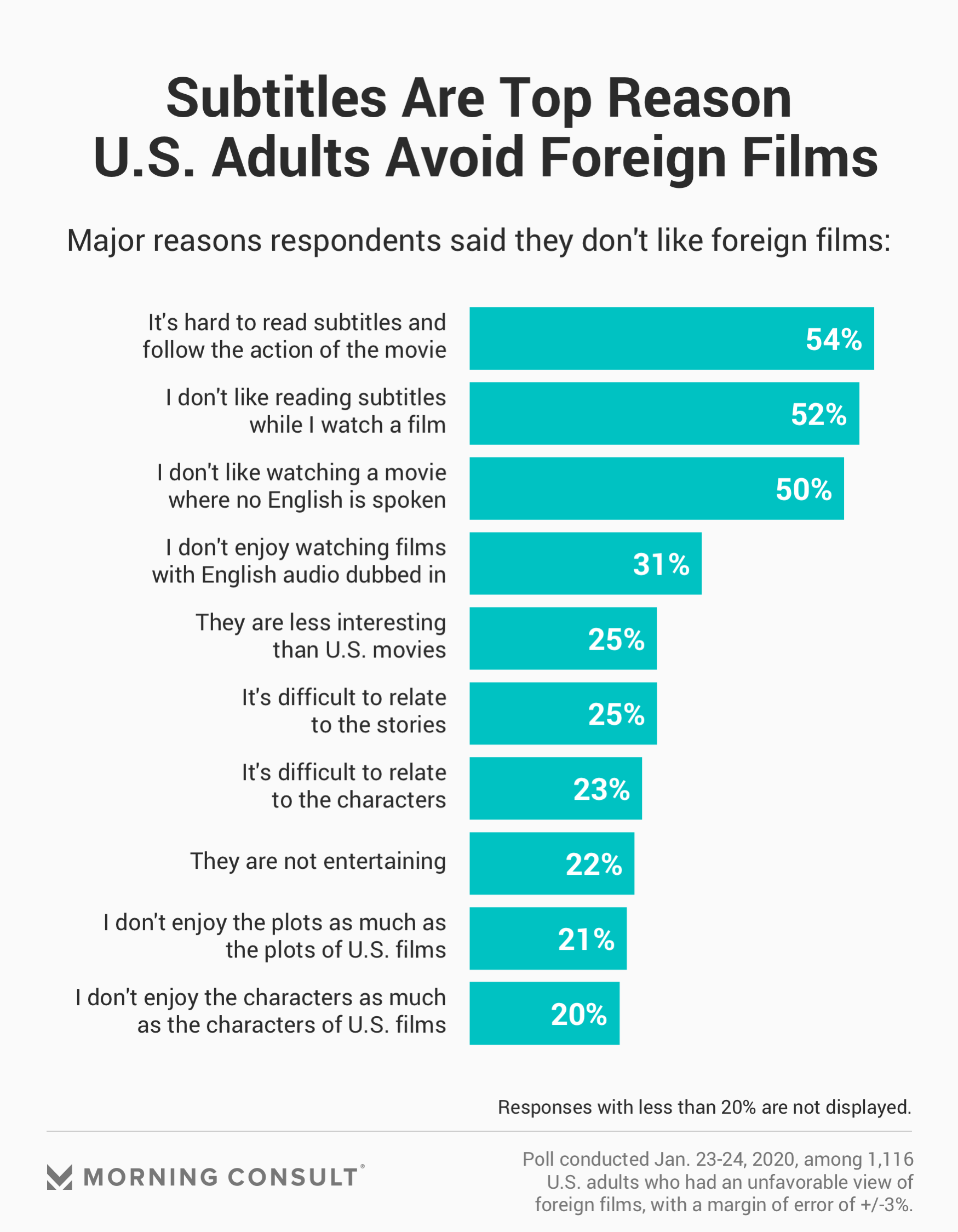 The survey, which has a margin of error of 2 percentage points, asked the 1,116 adults who had an unfavorable view of foreign language films why they disliked the genre. More than half (54 percent) cited the difficulty of reading subtitles while trying to follow on-screen action as a major reason why they were not a fan of the genre, while 50 percent said they did not like watching films where no English is spoken. The margin of error for that subsample is 3 points.

Experts say U.S. audiences for foreign cinema have typically been small, with Robert Thompson, director of the Bleier Center for Television & Popular Culture at Syracuse University, citing access to arthouse cinema as a major factor that may limit audiences to residents of major cities and dedicated cinephiles.

And for marketers and distributors, there’s little financial motivation for changing the status quo. “The cost of marketing and distributing theatrically a foreign language film is maybe prohibitive and not cost-effective at all,” said Paul Dergarabedian, a senior media analyst with Comscore Inc.

This results in what Ira Deutchman, an independent film producer and distributor, called a “self-fulfilling prophecy” where “there hasn’t been enough outreach to expand the audience,” which then results in a small box office.

But streaming services like Netflix Inc. could be a game-changer: Last year, Kelly Luegenbiehl, vice president of international originals at Netflix, said that half of subscribers have watched a foreign language show, up from roughly 30 percent two years earlier.

Dergarabedian said that streaming has a lower “buy in” for North American audiences, who can be “risk averse” when it comes to foreign films.

“You don’t have to go to get in the car and go to the movie theater and pay your money,” he said. “You just can sit back and click through the offerings.”

But while streaming may help expand access to foreign cinema, it doesn’t provide a solution to audiences’ aversion to subtitles — and may actually exacerbate the issue. As Thompson notes, many people engage in “secondary or tertiary activities” while streaming videos at home.

“A subtitled film requires that you have a 100 percent engagement with your eyes and the film,” he said. “And that’s not the way most Americans have learned to watch films outside of the theater.”

But films like “Parasite” could be changing the marketing field for foreign cinema. Dergarabedian and Deutchman note that Neon, the distributor releasing “Parasite,” has done a great job marketing the best picture nominee, with Deutchman praising the speed with which Neon brought the film to a wide audience.

Both experts predict that Neon, which is set to release the critically acclaimed “Portrait of a Lady on Fire” widely in the U.S. later this month, could be positioning itself to help international cinema find steady box office success in the United States.

“I think Neon is really a great custodian and curator of great independent cinema and international cinema,” Dergarabedian said.

And Deutchman said the success of “Parasite” could create the right circumstances for other foreign language films to succeed.

“When something does break through the way that ‘Parasite’ is breaking through right now, it actually creates an environment in which people are more open to to try things out again,” he said.

“‘Parasite’ is lightning in a bottle,” he said. “I don’t think it means that suddenly this barrier is going to be knocked down completely and suddenly studios are going to take a lot more risk on releasing more films that are subtitled in North America.”

But “if ‘Parasite’ can be the light to illuminate these types of films for a broader-based audience around the world,” he said, “there’s no downside to that.”