Democratic presidential candidate Sen. Bernie Sanders (I-Vt.) and Sen. Elizabeth Warren (D-Mass.) speak during the Democratic Presidential Debate at the Fox Theatre on July 30, 2019, in Detroit, Mich. In 2019, the two presidential candidates collected the largest sums from workers at the four large tech companies and their subsidiaries, according to an analysis of receipts filed to the Federal Election Commission on Friday, with Sanders bringing in about $491,600 and Warren raising approximately $421,500. (Justin Sullivan/Getty Images)
By Sam Sabin

As Democratic voters in early-state primaries and caucuses start to cast their votes in the 2020 presidential election, tech workers at Amazon.com Inc., Apple Inc., Alphabet Inc. and Facebook Inc. are putting their money on two of the most progressive candidates in the field: Sens. Bernie Sanders (I-Vt.) and Elizabeth Warren (D-Mass.).

In 2019, the two presidential candidates collected the largest sums from workers at the four large tech companies and their subsidiaries, according to an analysis of receipts filed to the Federal Election Commission on Friday, with Sanders bringing in over $491,600 and Warren raising more than $421,500. And experts say that the strong support among employees at these companies for Warren and Sanders, whose platforms seek to upend the current government systems, underscores the staying power of growing worker unrest among Silicon Valley’s engineers and other technical workers.

“In the post-Trump regime, union folks are attracted to candidates who are sharpening their platform and their analysis around the unequal power of corporations,” said Derecka Mehrens, executive director of Working Partnerships USA, a labor activism nonprofit in Silicon Valley. She noted that both Warren and Sanders fit that bill. 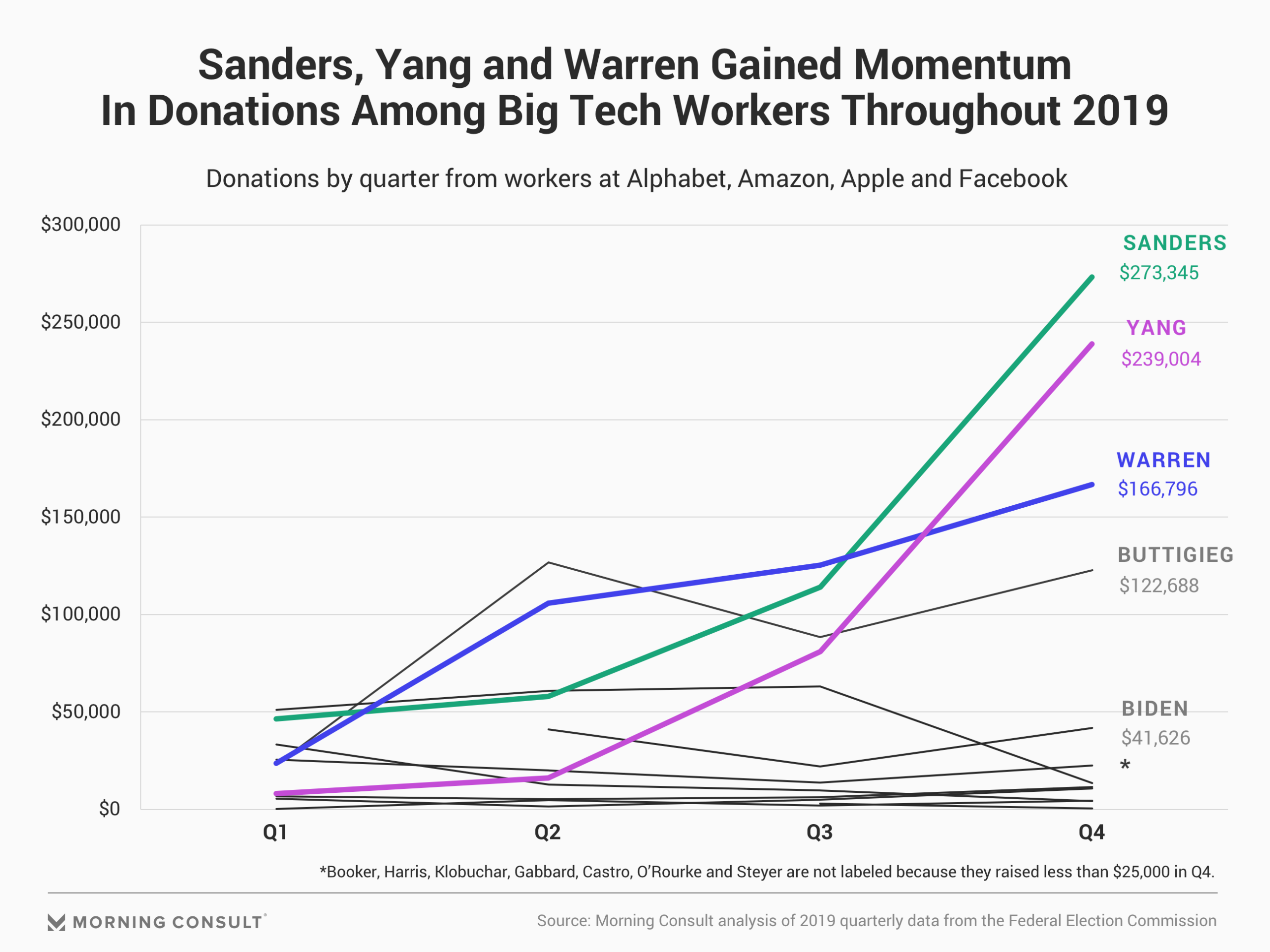 Throughout the year, only three current candidates were able to consistently grow their haul from workers at the four companies: Sanders, Warren and entrepreneur Andrew Yang, who raised about $239,000 in the last quarter of 2019 — the second-largest amount among presidential candidates during that period after Sanders’ estimated $273,300. But a larger number of employees donated to Warren in the fourth quarter (559) than to Yang’s campaign (440).

Sanders wooed the largest number of big tech workers in the last three months of the year, with 925 employees donating to his campaign, a sharp increase from the 520 who donated to him in the third quarter.

All three candidates also far outraised the rest of the nine who were included in Morning Consult’s analysis — including former Vice President Joe Biden, the current front-runner for the nomination, who raised less than a fourth of Sanders’ and Warren’s total 2019 hauls at roughly $104,400. 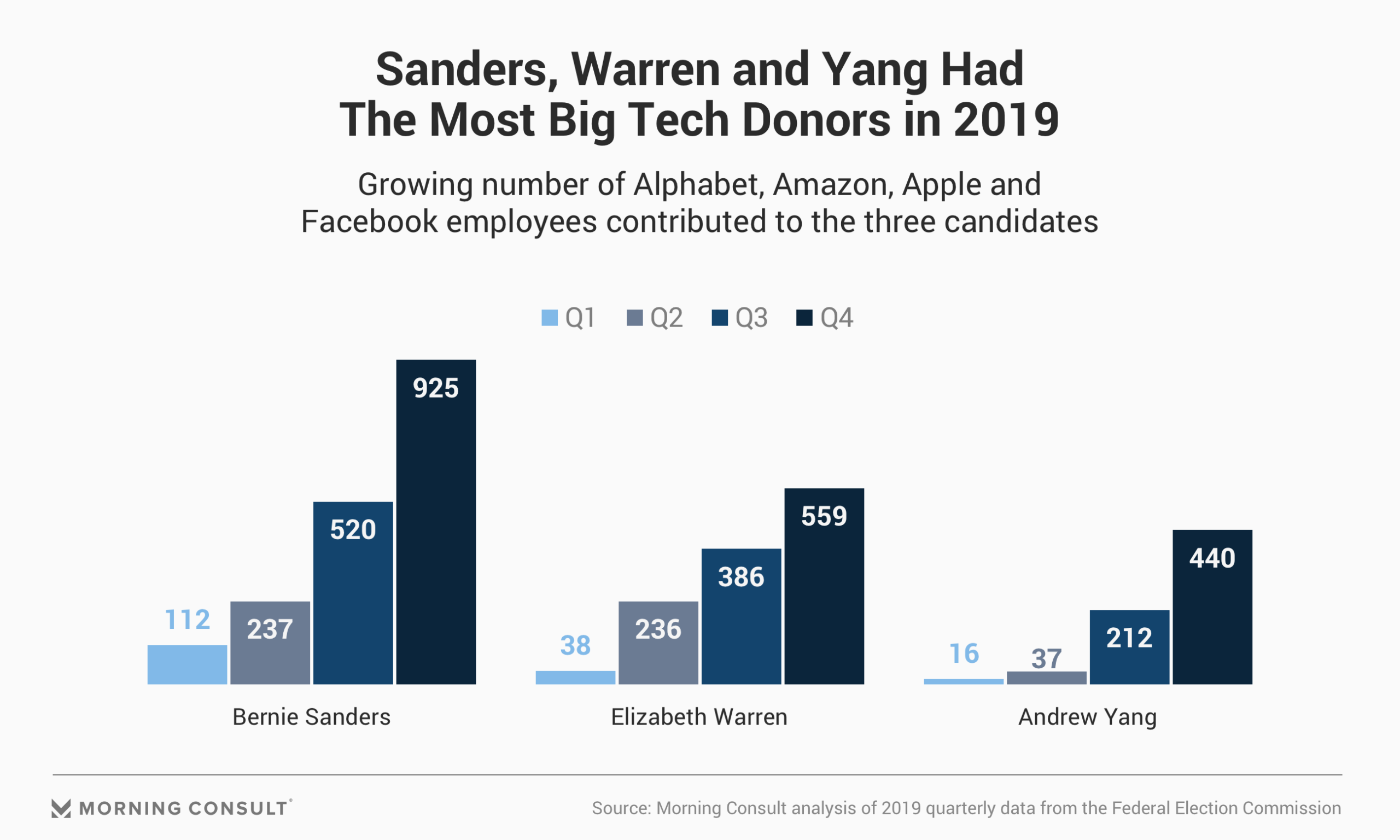 The support for progressive candidates comes at a time when unrest among Silicon Valley technical workers is starting to grow louder, coming in the form of protests against employers for issues such as sexual harassment in the workplace, company involvement in certain military contracts and loose environmental protections. For example, last week, more than 350 Amazon employees signed onto a public letter criticizing Amazon’s environmental policies, defying an internal policy barring them from speaking publicly about the company without permission.

Mehrens said these actions have only grown since President Donald Trump was elected to office, with tech workers criticizing some of their employers’ dealings with the Trump administration, such as Google’s involvement with a project that would lend artificial intelligence capabilities for military use.

Nelson Lichtenstein, director of the University of California, Santa Barbara’s Center for the Study of Work, Labor and Democracy, likened the current state of tech industry protests and support for progressive Democrats to the rise of both the steel industry and American automakers, when those workers started to dabble in unionizing and other collective actions in the early 20th century.

“When new industries begin, you have a wonderful sense of camaraderie,” Lichtenstein said. “Once an industry is mature, the classic class divisions emerge, and that’s what’s happened obviously in Silicon Valley.”

Although workers at these large tech companies haven’t pushed their activism efforts much beyond protests based upon societal issues, Alexander Hertel-Fernandez, an assistant professor of international and public affairs at Columbia University, said it’s possible that having so many Democratic candidates discuss progressive labor ideas, such as allowing gig workers to unionize or raising the federal minimum hourly wage to $15, could be inspiring them to think beyond their current scope.

He suggested there could be a scenario where unions look at the FEC receipts from individual donors to get a sense of which workplaces support candidates with pro-labor platforms to determine who to target next for membership.

Mehrens said that the state of labor activism, at least in the tech industry, currently appears to be in a “phase of experimentation,” where workers are still learning what kinds of protests work best for them and how a union could possibly work. But all of their efforts are underscored by the progressive candidates they appear to be supporting — at least with their wallets.

The slate of early collective labor actions in Silicon Valley mixed with the big tech workers’ support for Sanders and Warren “indicates something is going on in the air” that is “quite remarkable,” Lichtenstein said.

“There’s lots of people who would love to be in Silicon Valley doing what they’re doing, and so if they move in this direction, well, other people will follow,” he said. “That’s important.”