More U.S. adults had the economy on their minds than any other issue

This image contains real responses from a poll of 4,400 U.S. adults that asked the question: “Specifically, what is the one main issue you are concerned about when casting your vote for the 2020 presidential election?” (Morning Consult illustration by Samantha Elbouez)
By Joanna Piacenza

Since early 2017, Morning Consult has been asking thousands of Americans every day about which issues are driving their decisions at the ballot box. This time, we decided to let the American public speak for itself — and more often than not, people were talking about the economy.

In a survey, Morning Consult provided 4,400 U.S. adults with an unlimited blank space and a simple prompt: “Specifically, what is the one main issue you are concerned about when casting your vote for the 2020 presidential election?” 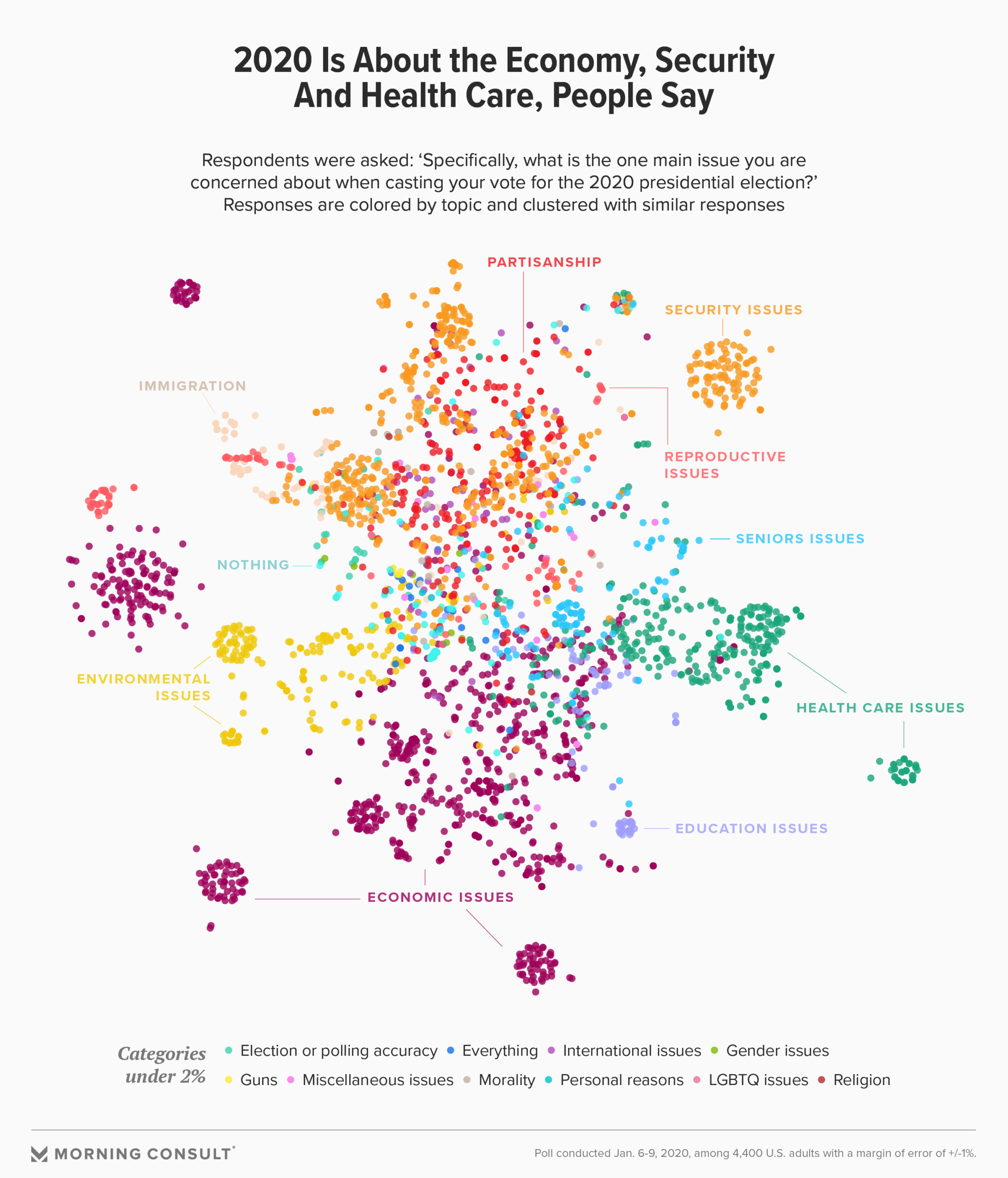 New machine-learning technology from Morning Consult analyzed and visualized the “open-ended” responses, which varied from one word to one paragraph. The approach uses powerful natural language processing (NLP) models that, after being trained, “understand” the semantic and syntactic meaning of words, and are mindful of most misspellings (recognizing “Medicade” as “Medicaid,” for example). This “human-in-the-loop” process then involved Morning Consult journalists and data scientists using the NLP analysis results to curate clusters of responses, which are visible in the graphic above.

The survey found a lion’s share of people across the country said the economy was their main issue for 2020, but economists and political scientists disagree over what these findings mean for President Donald Trump and the quickly approaching election. 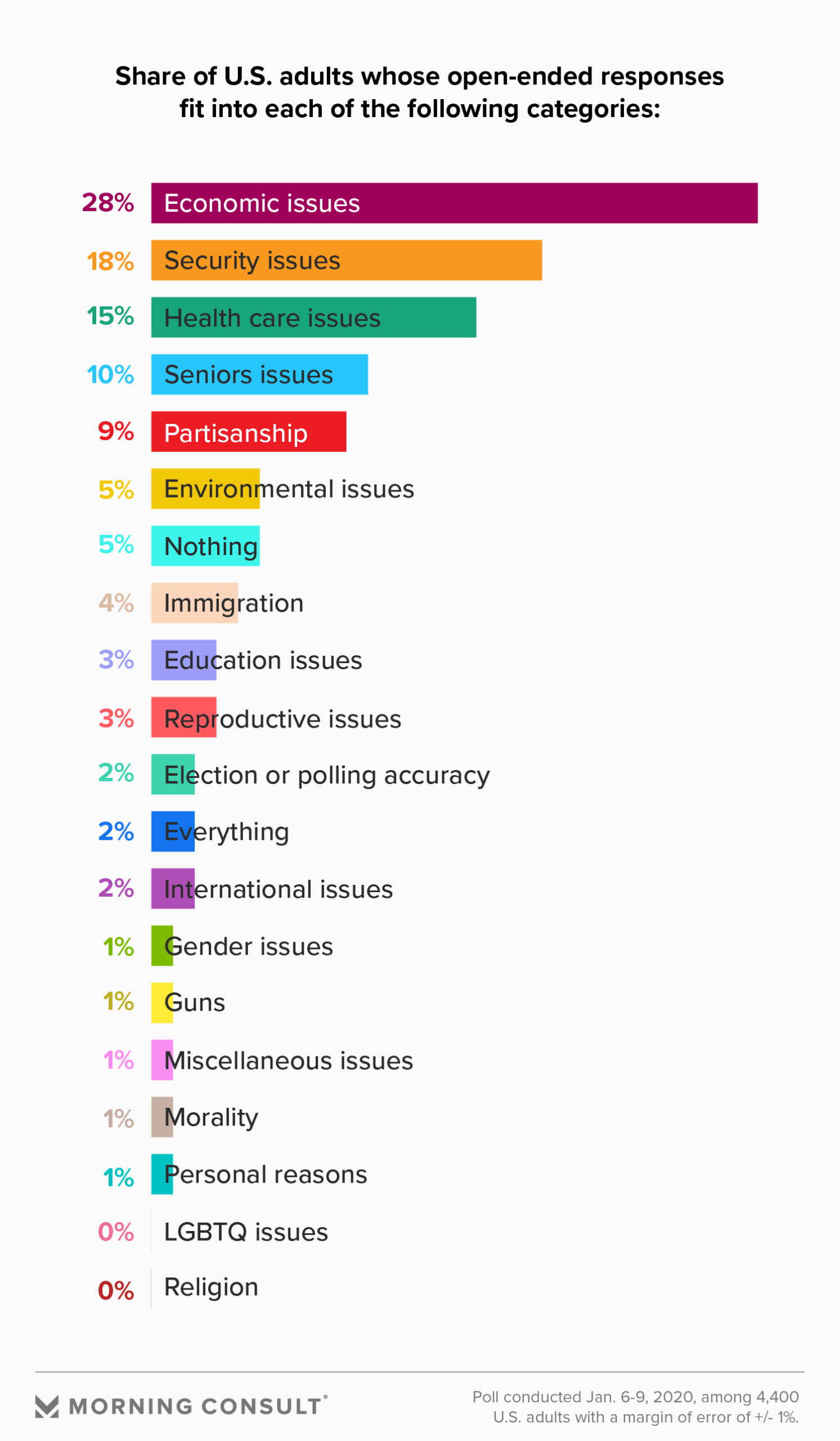 “When an economy is good, presidents tend to get re-elected,” said John Hudak, a senior fellow within the Brookings Insitution’s Governance Studies. “But the reality of the economy is that it is affecting people very differently.”

The economy looks rosy from a 10,000-foot view — unemployment sits at 3.5 percent, consumer confidence remains strong, — but certain sectors key to the Republican base, including manufacturing, aren’t brimming with good news.

Twenty-eight percent of respondents, including 29 percent of independents, 28 percent of Republicans and 26 percent of Democrats, said something about the economy. The Jan. 6-9 survey has a margin of error of 1 percentage point.

The economy was the top or second issue for each political party along with other key blocs, including college-educated white adults and those who voted for Barack Obama in 2012 before opting for Trump in 2016. These findings roughly match Morning Consult tracking on main issues among registered voters.

The survey experiment aimed to eliminate potential polling bias that can emerge from guided prompts by simply allowing respondents to write what was on their mind. It’s not meant to be an alternative to traditional forced-choice polling; rather, it is a qualitative lens through which we hope to better understand what people across the country are thinking about as the election gears up. 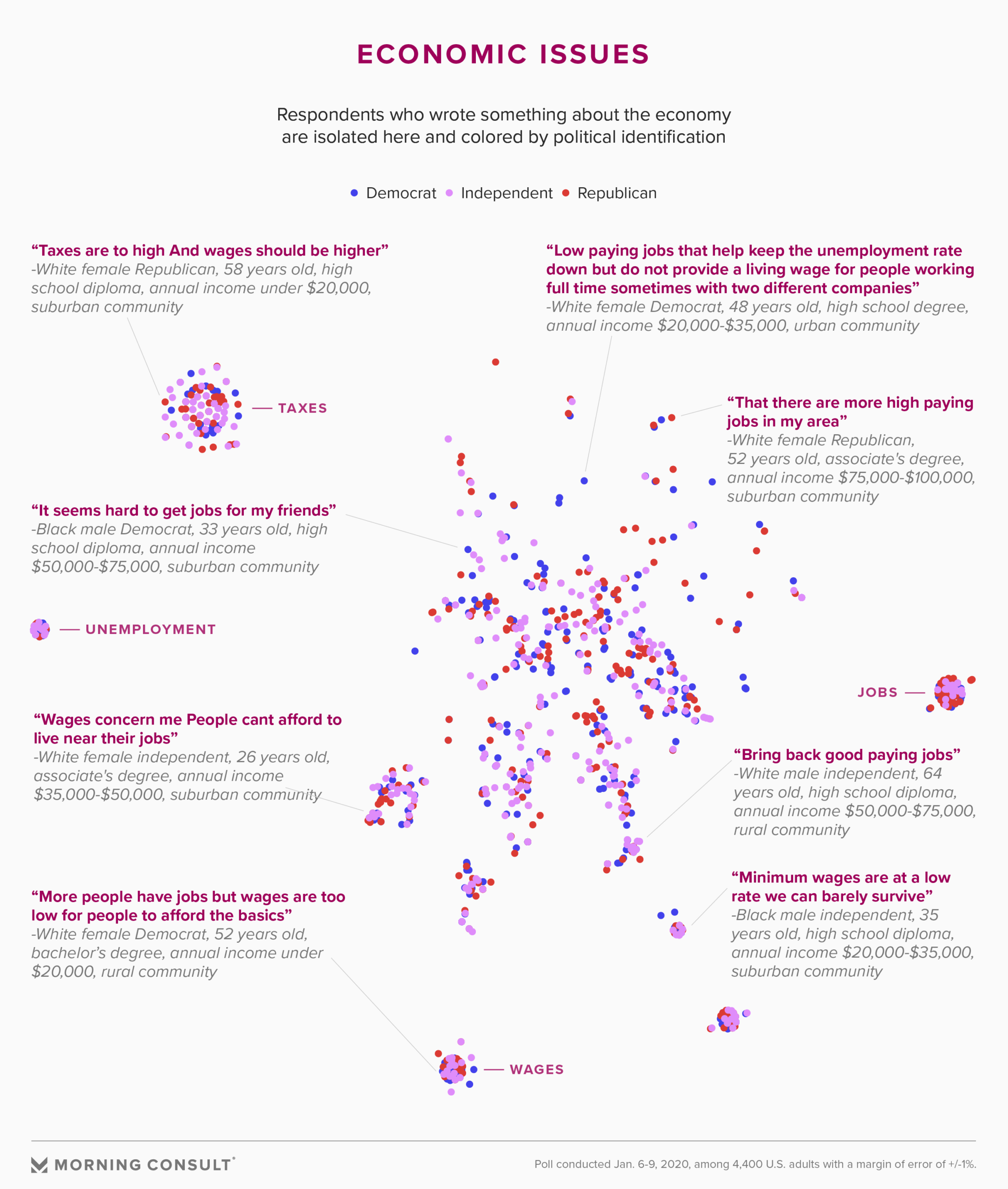 The first interpretation is political scientists’ well-trodden thesis that a strong economy is good news for whoever is in power, and that respondents mentioning the economy were doing so in a positive way.

After learning about the details of the data experiment, Lynn Vavreck, a U.S. politics and public policy professor at the University of California, Los Angeles, said, “What it portends, for me, is a Republican re-election.”

“Trump will be really well-positioned to claim credit for a booming economy,” she said, a strategy he’s already begun employing on Twitter and at many campaign rallies.

A Jan. 4-5 Morning Consult/Politico survey found 50 percent of registered voters approved of Trump’s handling of the economy — 9 points higher than the share who approved of his overall job performance.

The second interpretation is that respondents were listing topics for which they are concerned.

“That would suggest that there’s more discontent with the economy than the macro numbers would let on,” Veuger said. One of the largest economic subgroups was jobs and unemployment, with 242 people, or 6 percent, naming it as their top issue. 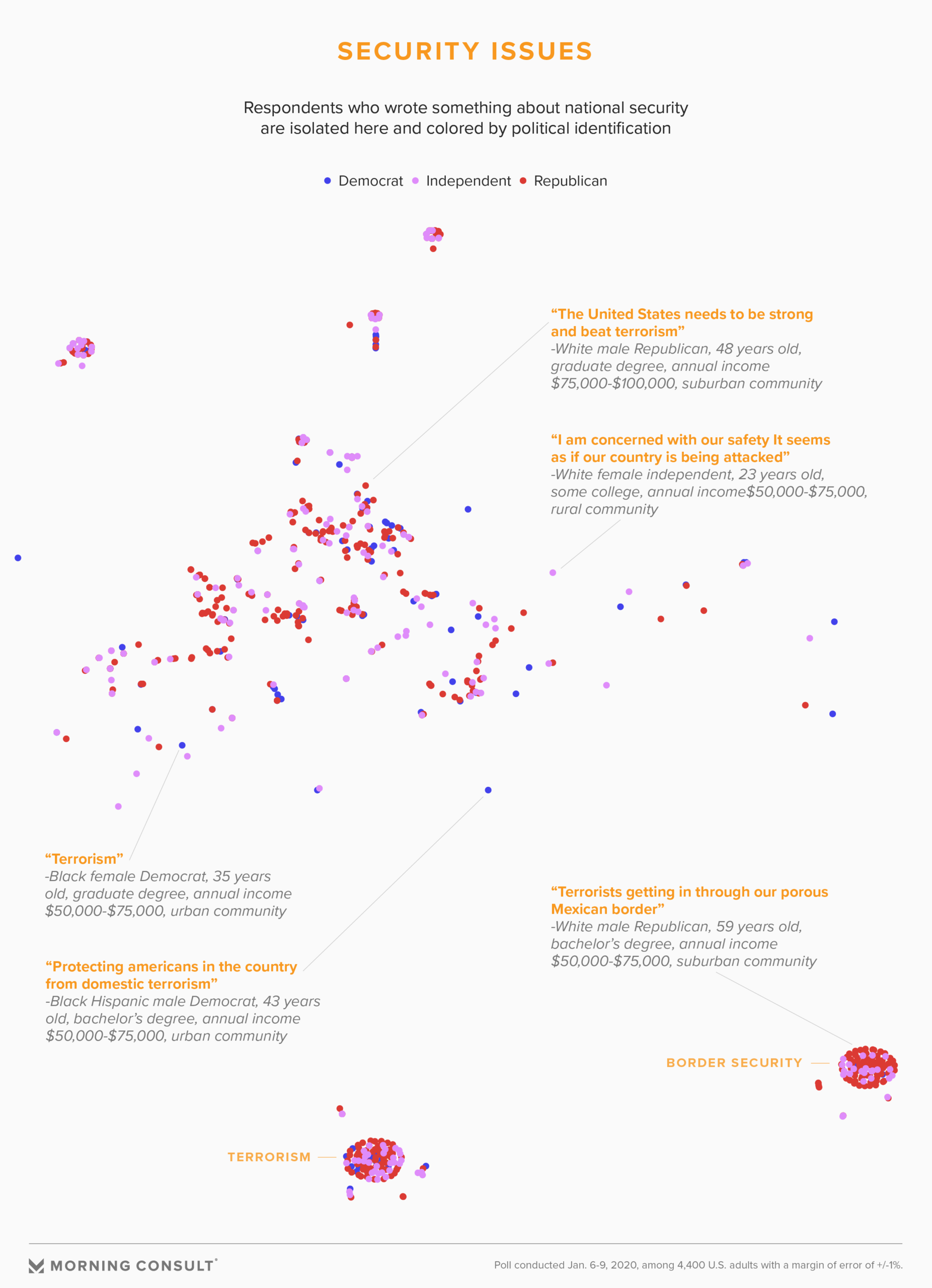 Dietrich Vollrath, chair of the University of Houston’s Department of Economics, said the distribution of the gross domestic product has undergone a structural shift over the past 30 years — one that’s benefiting economic rents, or those at the top, at the expense of capital and labor, or those at the bottom.

“While there may be jobs, wage growth probably feels very muted relative to past experience,” he said. People could also be sensing that there isn’t a very active job market, he said, because they look around and all they see are jobs at the same wage, with no opportunity for growth.

“Taxes” was another common topic within the economy, with the majority of respondents identifying as Republican or independent. Trump’s sweeping tax reform bill that went into effect in 2018 proved to be unpopular at the time, but voters who care about taxes tend to side with a Republican candidate regardless. 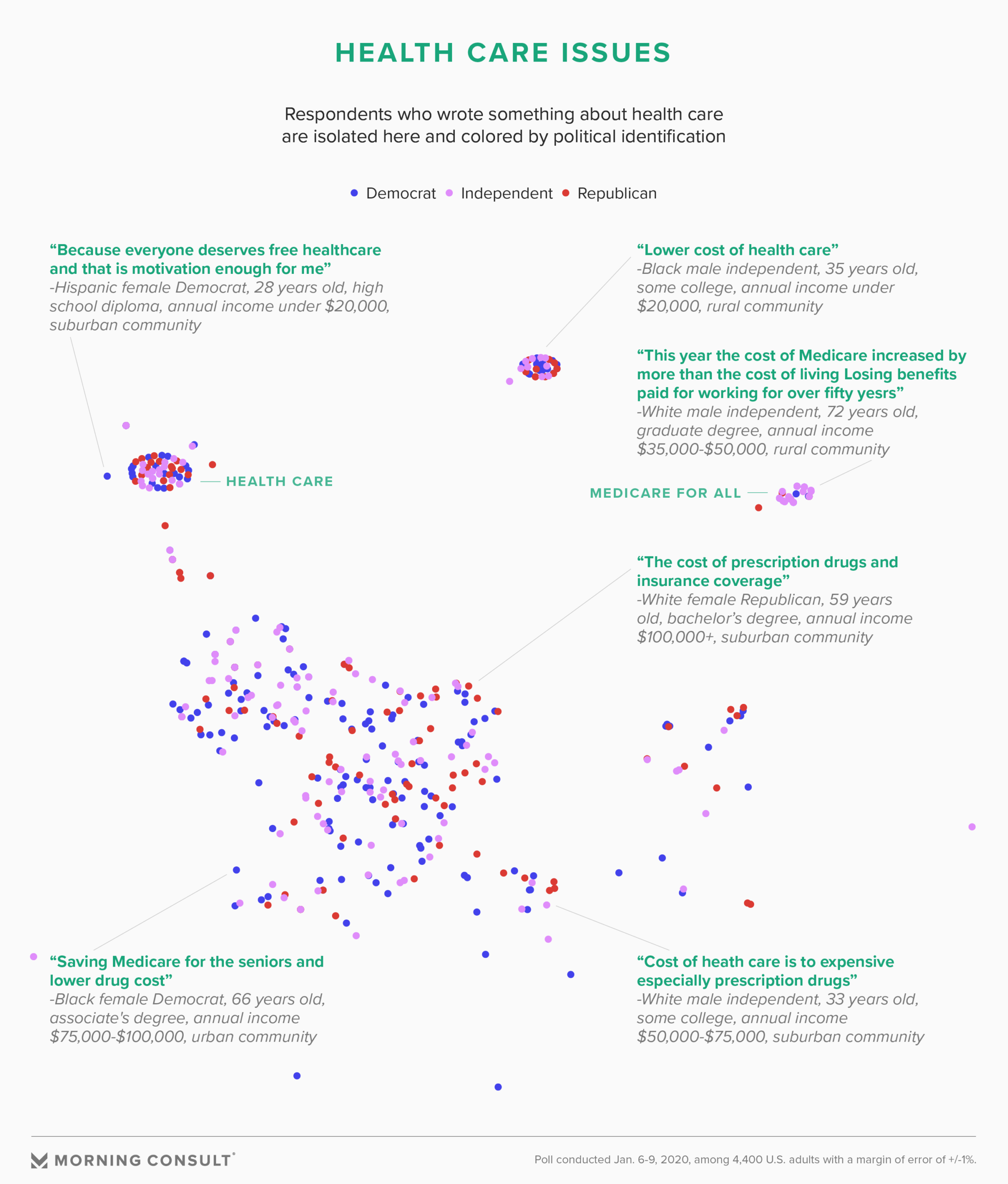 The fact that respondents named security issues nearly as much as they named the economy also bodes well for Trump: Morning Consult polling shows voters trust Republicans in Congress more than Democrats on security issues, such as terrorism, border security and foreign policy, by a consistent double-digit margin.

While a smaller share (15 percent) of respondents mentioned something related to health care, Republican strategist Danny Lopez Diaz pointed out that for many, the economy and health care are intrinsically linked.

“The cost of drugs is definitely an important issue for families across the ideological spectrum,” he said, many of which are having trouble making ends meet each month.

Democrats have a leg up on this issue: Registered voters are more likely to trust Democrats than Republicans in Congress to handle health care by double digits, per Jan. 17-19 Morning Consult polling: 46 percent vs. 35 percent. 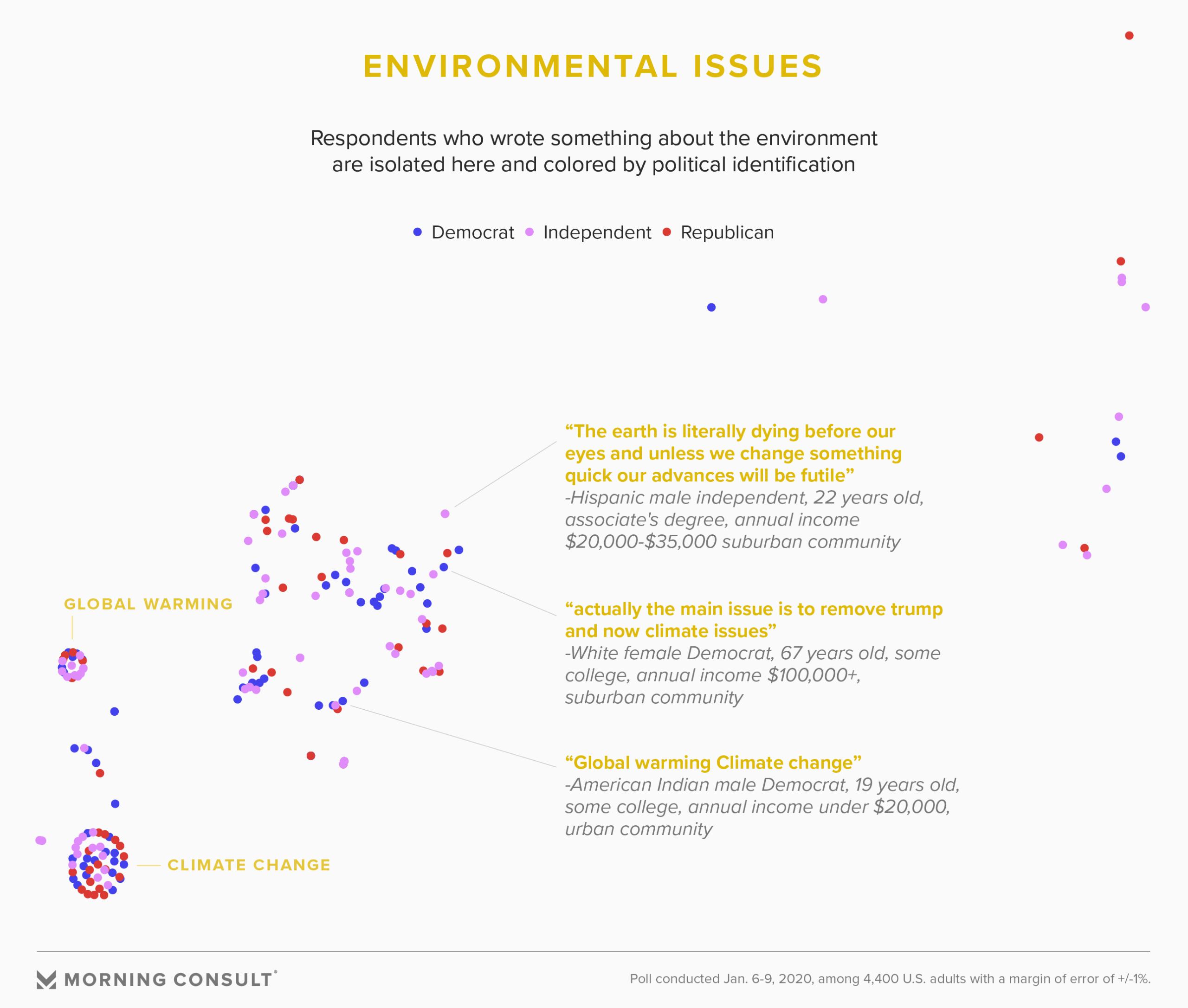 A number of smaller issues divided respondents along partisan lines, including climate change and immigration. Democrats, for example, were seven times more likely to mention “climate” or other phrases connected to environmental protection than Republicans.

But one category eclipsed policy issues such as education and reproductive health: “Partisan issues,” or instances when respondents didn’t name one particular issue, but instead said the election was about getting Trump out or electing a Democrat into office — or conversely, keeping Trump in the White House or blocking Democrats from getting power. 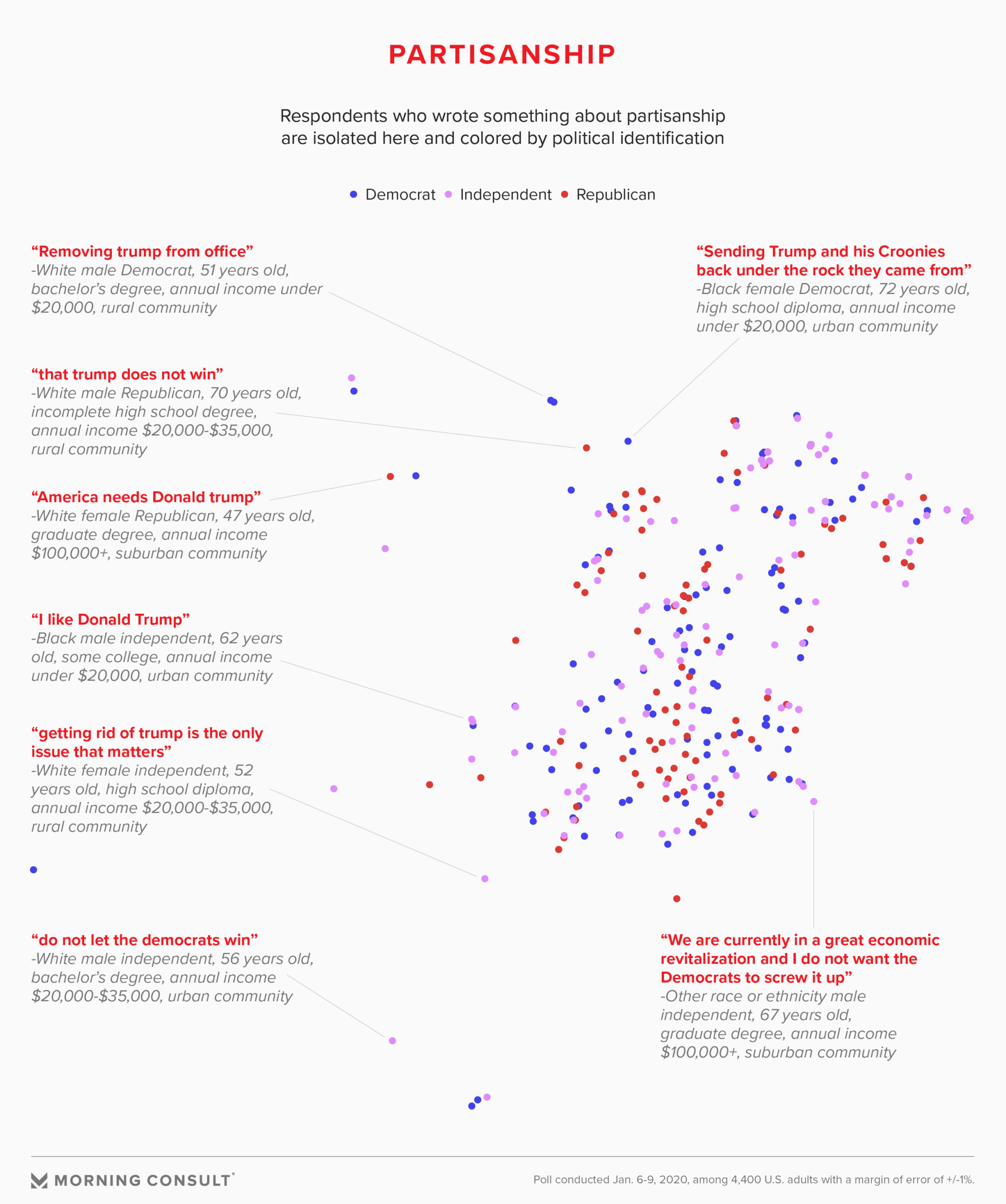 Much of the race will be based on either parties’ ability to win over independents, and one section of the experiment delivers good news for Democrats. Of the 75 independents who mentioned “Trump” or “president” in their responses, 68 percent had a negative tone (“We need to remove Trump before he starts another war”) while 9 percent said something positive (“Trump needs to win”). The remaining responses had a tone that was undetectable.

With the general election nine months out, UCLA’s Vavreck emphasized that a lot can change, especially after the Democratic nominee is selected in five months.