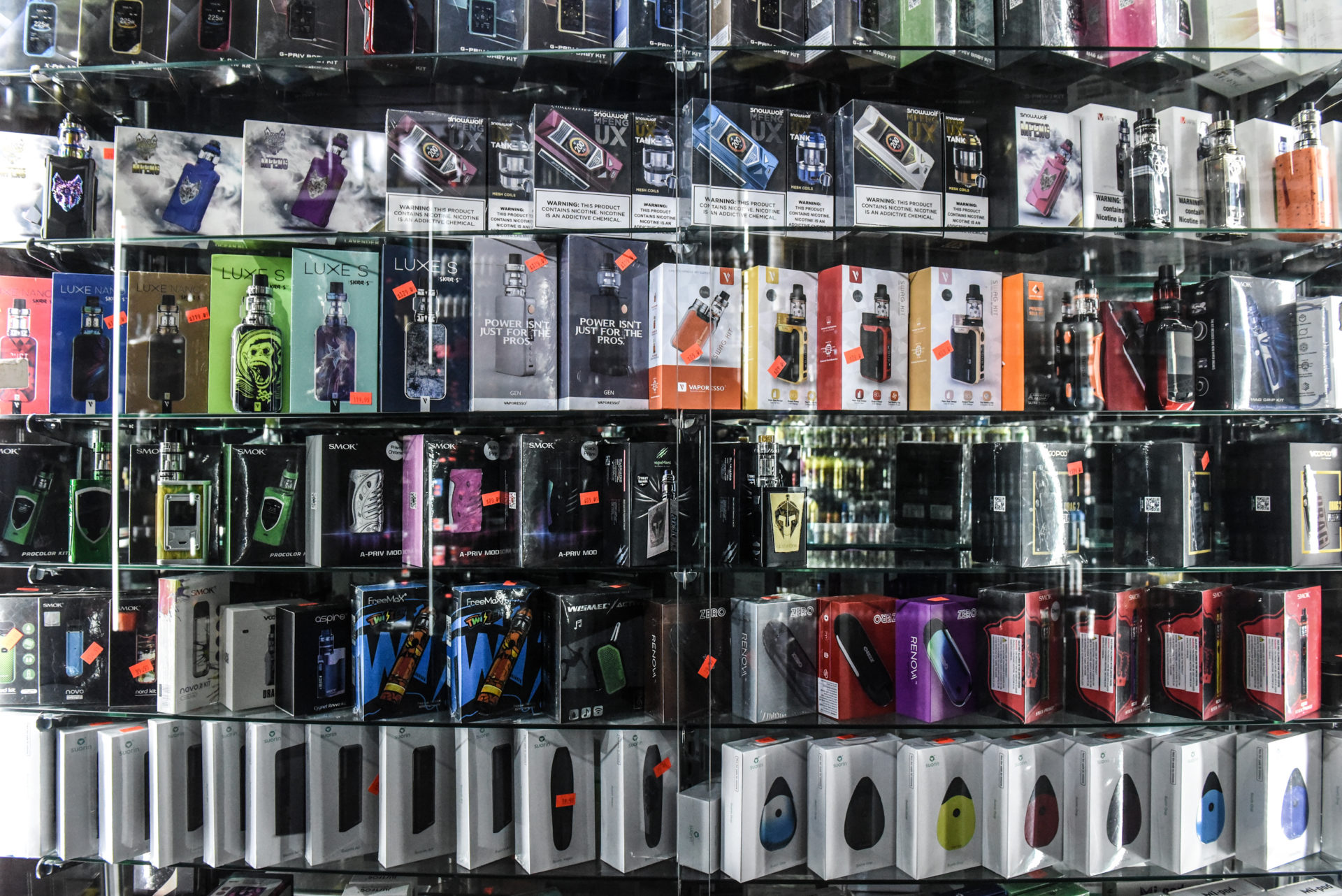 Vaping and electronic cigarette products are displayed in a store on Dec. 19, 2019 in New York City. (Stephanie Keith/Getty Images)
By Sara Wilson

Even as health officials work to inform Americans that marijuana vaping products containing vitamin E acetate were linked to the majority of more than 2,600 lung disease hospitalizations last year, most U.S. adults still believe traditional e-cigarettes like those made by Juul Labs Inc. are more harmful than their THC-containing counterparts. 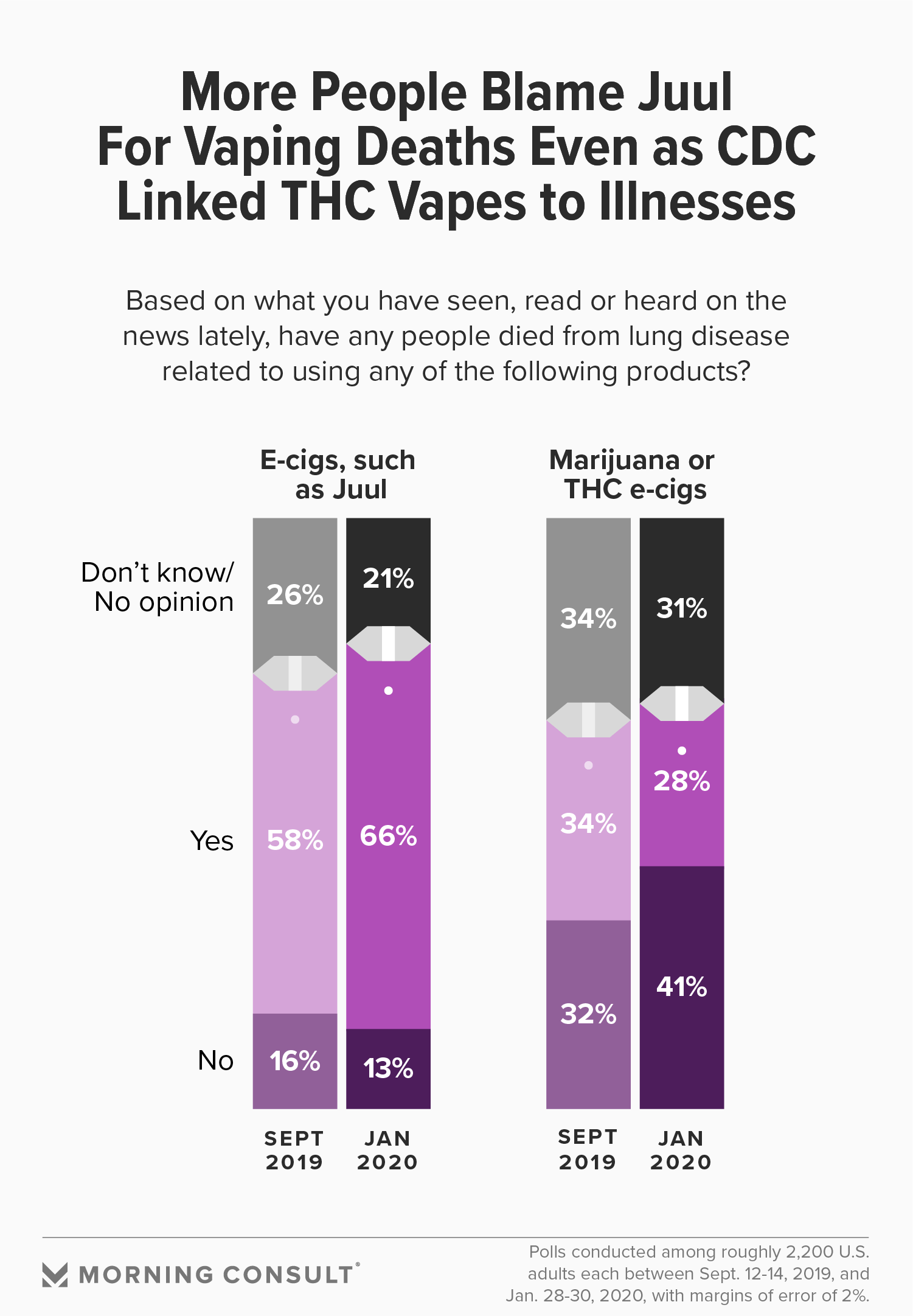 Sixty-six percent of adults still view e-cigarettes such as Juul as the culprit behind the lung illness that has claimed 60 lives, according to a Morning Consult poll of 2,200 adults from Jan. 28-30. That figure is up 8 percentage points from a Sept. 12-14, 2019, survey, conducted near the peak of the crisis — and about three months before the Centers for Disease Control and Prevention identified vaping products containing THC with a vitamin E acetate additive as the likely source of the lung injuries.

The CDC recently amended its suggestion of avoiding vaping altogether to a more specific recommendation to not use THC-containing products. Even so, fewer adults actually blame THC vapes for the lung illnesses, down to 28 percent in the most recent poll from 34 percent in the September survey. The initial panic of vaping-related illness made a big splash, but the updated conclusion has barely made a ripple in the mainstream news cycle.

“I think to some degree, it’s been intentional to conflate nicotine vaping with the THC-cannabis vaping, perhaps with the well-meaning motive about the teen panic about vaping increasing,” said Dr. David Abrams, professor of social and behavioral sciences at New York University’s School of Global Public Health. “I think some people are thinking, ‘Let’s just demonize all vaping,’ regardless of what the science says.”

The exact cause of the illnesses aside, a majority of adults continue to believe that e-cigarettes are harmful, a trend that has steadily increased over time: 65 percent of adults rated them as “very harmful” in January, up 7 percentage points from September and 27 points from when Morning Consult first asked the question in June 2018.

The uneven public reaction may deter progress for adults using e-cigarettes for one of their intended purposes: as a way to quit smoking altogether. A group of tobacco policy experts that included Abrams and three public health deans argued in a December article in the journal Science that restricting e-cigarette sales could do more harm than good by eliminating that transitional option for smokers. Blanket policies such as an across-the-board vaping ban would “derail the trend that could hasten the demise of cigarettes,” according to lead author Amy Fairchild, dean of Ohio State University’s College of Public Health. 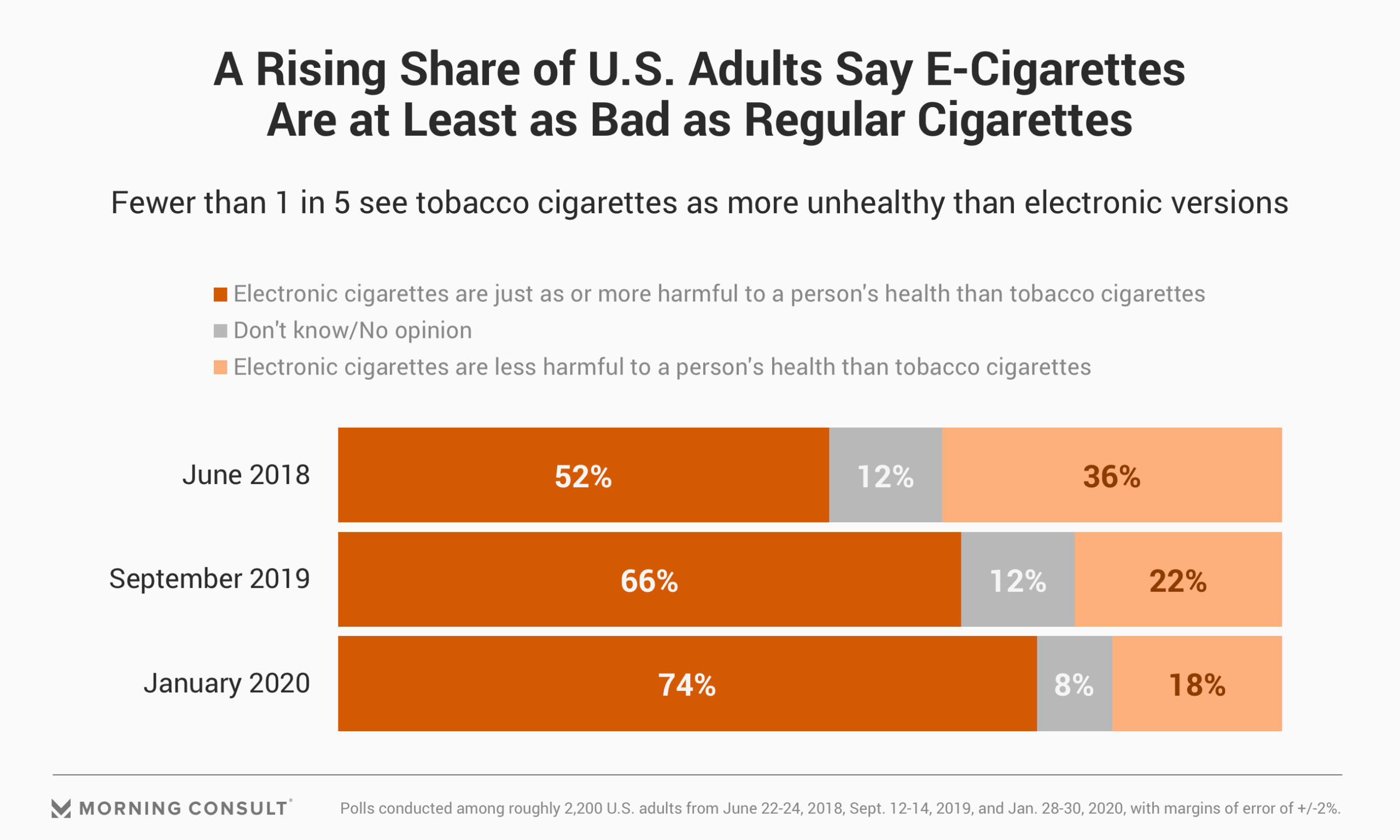 Executives from e-cigarette companies Juul Labs Inc., Logic Technology Development LLC, NJOY LLC, Fontem U.S. Inc. and Reynolds American Inc. are set to testify before Congress on Wednesday, primarily about the youth vaping epidemic. The January poll shows 65 percent of adults support holding these executives accountable for the surge in youth vaping, including 67 percent of Democrats and 70 percent of Republicans.

The Trump administration’s partial ban on flavored e-cigarette cartridges other than tobacco and menthol flavors takes effect after midnight Thursday, a retreat from the president’s earlier promise to ban all flavored vapes. While 61 percent of adults back a total flavor ban, Republican support is a bit stronger, with 70 percent supporting banning the sale of all vape flavors, compared to 60 percent of Democrats.