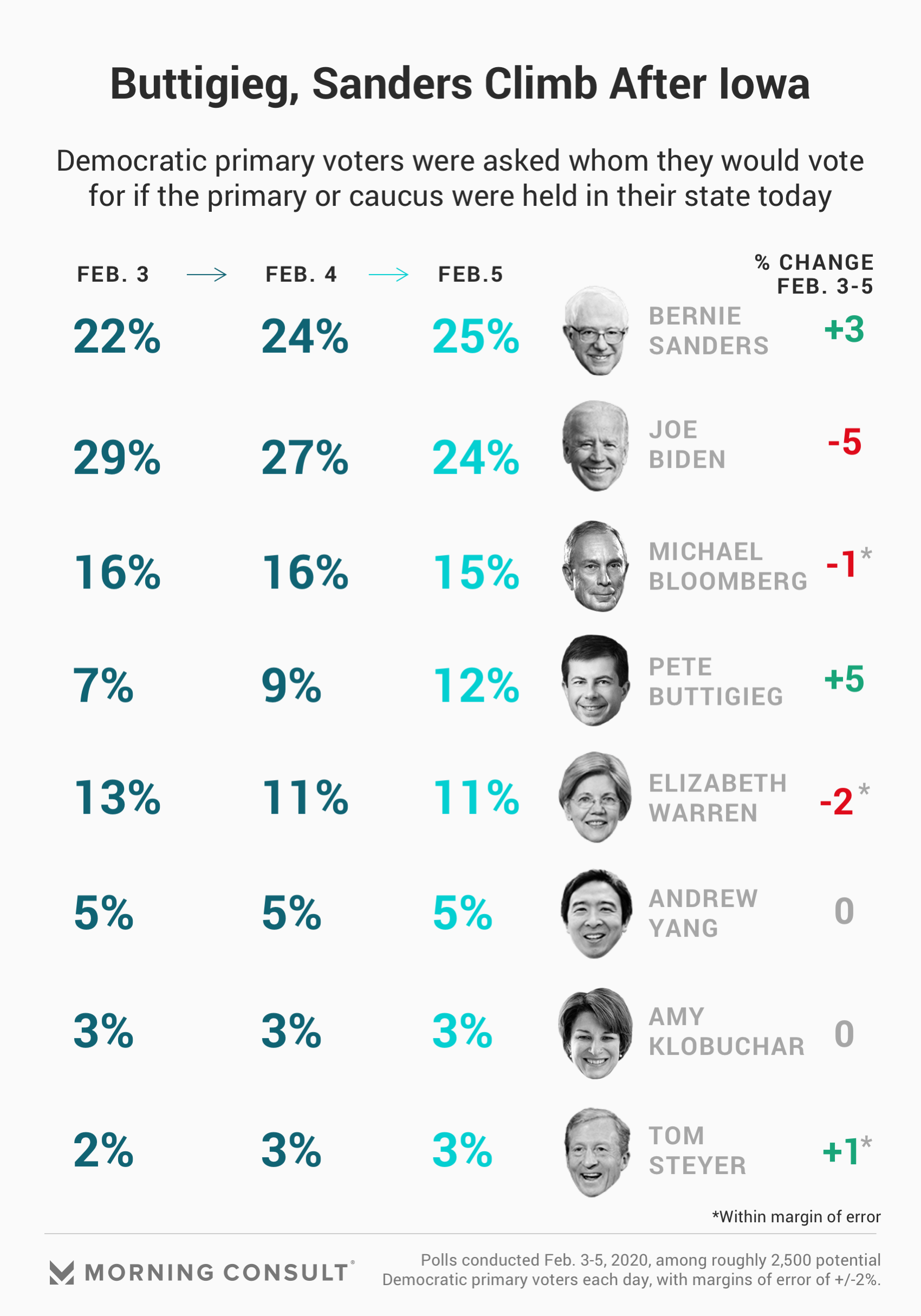 According to Morning Consult surveys of roughly 2,500 Democratic primary voters conducted each of the past three days, Buttigieg’s first-choice support nationwide rose 5 percentage points since Monday, to 12 percent. During that time, Biden’s first-choice support fell 5 points, ending at 24 percent on Wednesday, placing him 1 point below Sanders, statistically tied within the surveys’ 2-point margins of error.

The majority of the movement for Buttigieg and Biden came in surveys conducted Wednesday, as the picture became clearer about who won Iowa’s caucuses after a failure in the Iowa Democratic Party’s caucus-night reporting system Monday. On Tuesday evening, the state party began releasing results, and by Wednesday afternoon, 85 percent of precincts had reported, showing Buttigieg and Sanders vying for first place, followed by Sen. Elizabeth Warren (D-Mass.) and then Biden.

While Biden’s support fell in daily tracking, a separate Morning Consult poll conducted Feb. 4-5 found Democratic primary voters only slightly more likely to say they were more inclined to support Sanders than the former vice president following the Iowa results, 52 percent to 48 percent. The poll found a similar gap between Warren and Buttigieg (41 percent to 38 percent), within the sample’s 3-point margin of error. 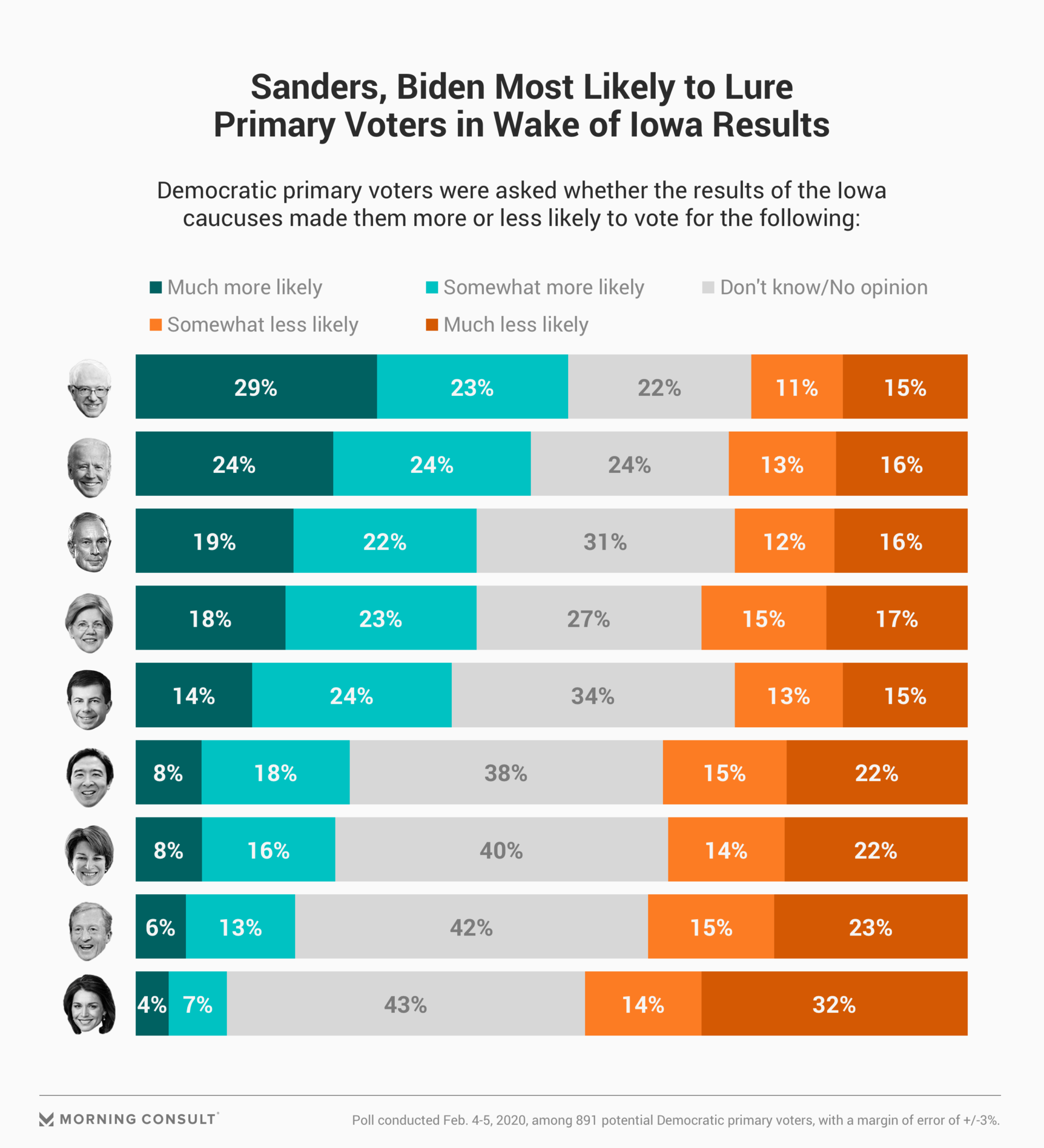 By a margin of 12 points, Democratic primary voters said they were less likely after Iowa to back Sen. Amy Klobuchar (D-Minn.), whose 3 percent first-choice support nationwide went unchanged after her apparent fifth-place showing in the caucuses. 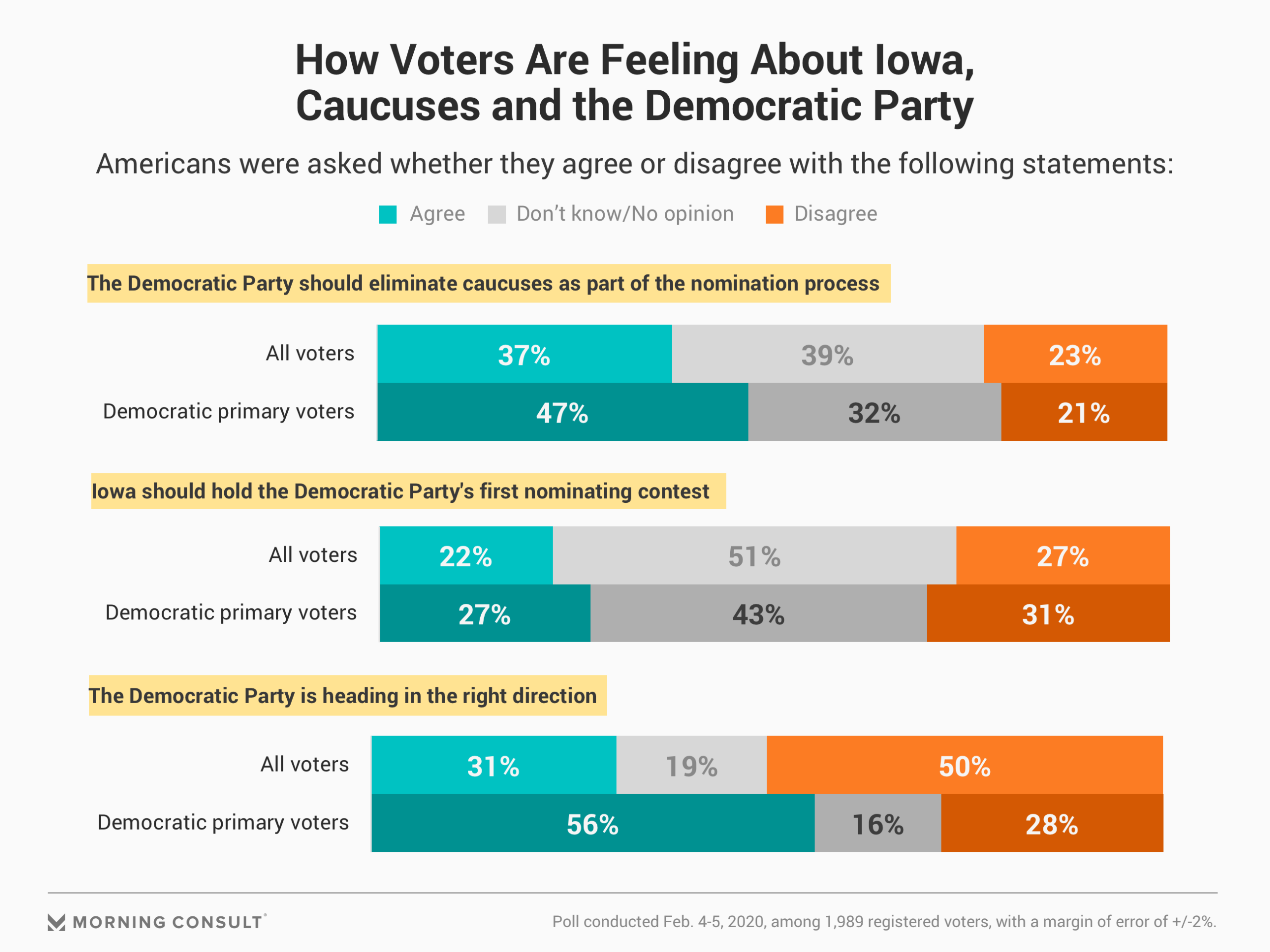 While Iowa Democrats’ struggles in tabulating the results from its first-in-the-nation caucuses has prompted many in the party to question whether the state should continue its leading role in the nominating contests, that debate doesn’t appear to be weighing particularly heavily on the minds of primary voters themselves, with the greatest share (43 percent) expressing no opinion about whether Iowa should continue to go first. Though Democratic primary voters don’t have strong feelings about whether Iowa should keep its place, a plurality (47 percent) said the Democratic Party should eliminate caucuses.

Looking ahead to November, Democrats are significantly more bearish than their GOP counterparts. 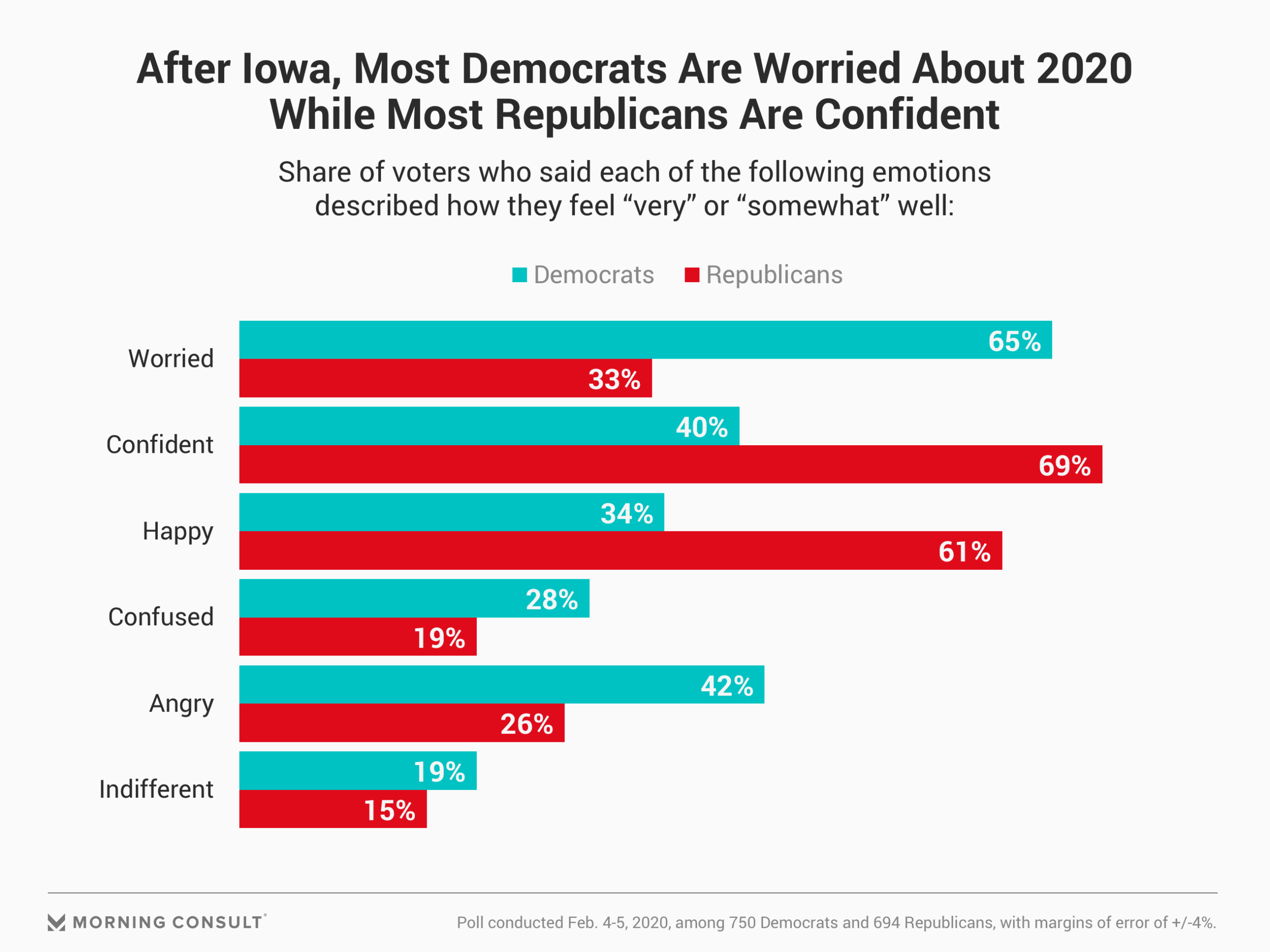 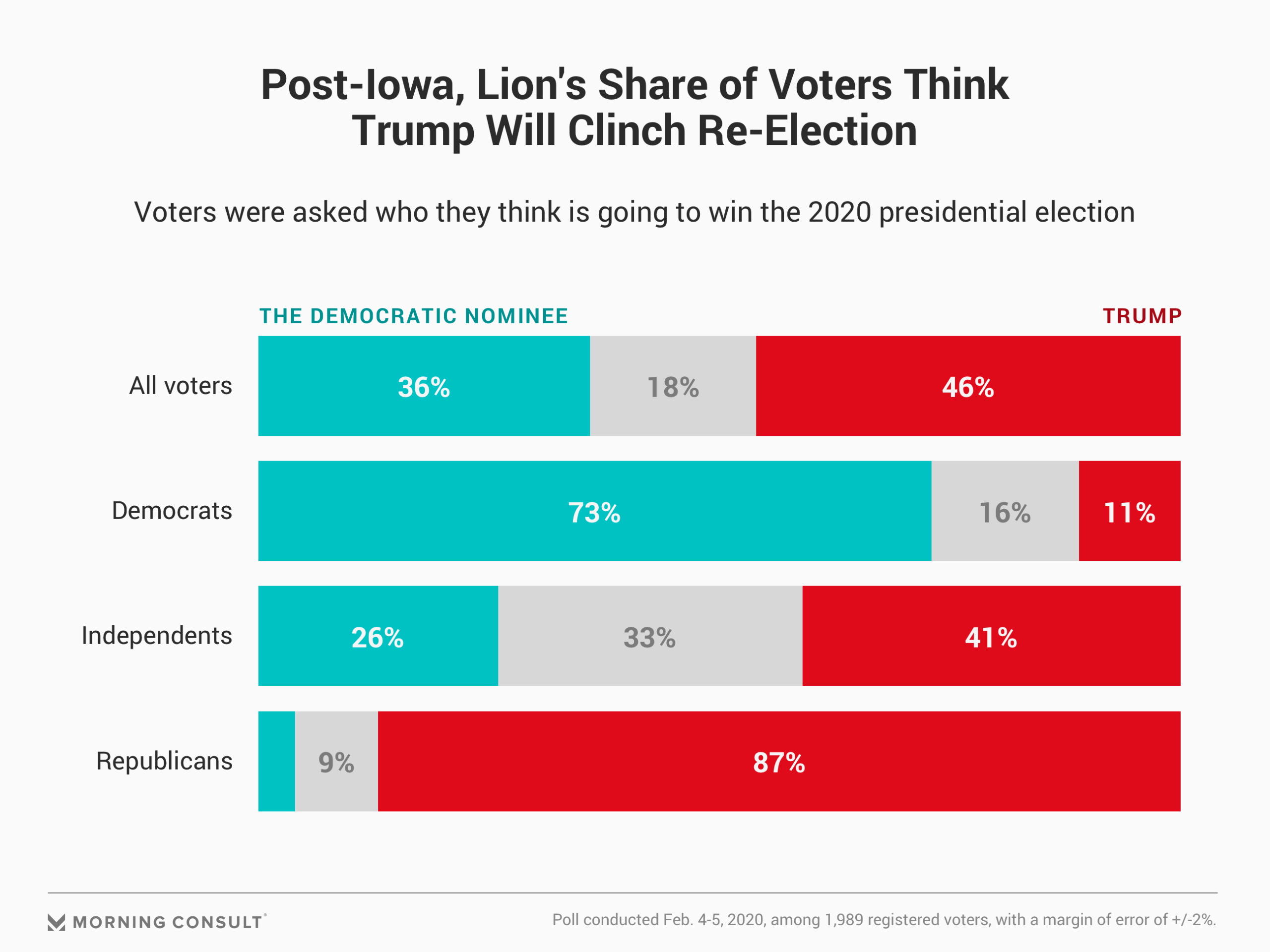