Sanders Takes the Lead, but Bloomberg and Buttigieg Reap Spoils of Biden’s Decline

Sen. Bernie Sanders (I-Vt.) speaks during a stop at the Coffee Coffee roasters on Feb. 10 in Salem, N.H. The latest Morning Consult poll tracking the race found Sanders in first place nationally for the first time ever. (Joe Raedle/Getty Images)
By Eli Yokley

The figures — from Morning Consult’s Feb. 4-9, post-Iowa poll of 15,346 Democratic primary voters — illustrate the challenges facing candidates who hope to present themselves as a moderate alternative to Sanders. 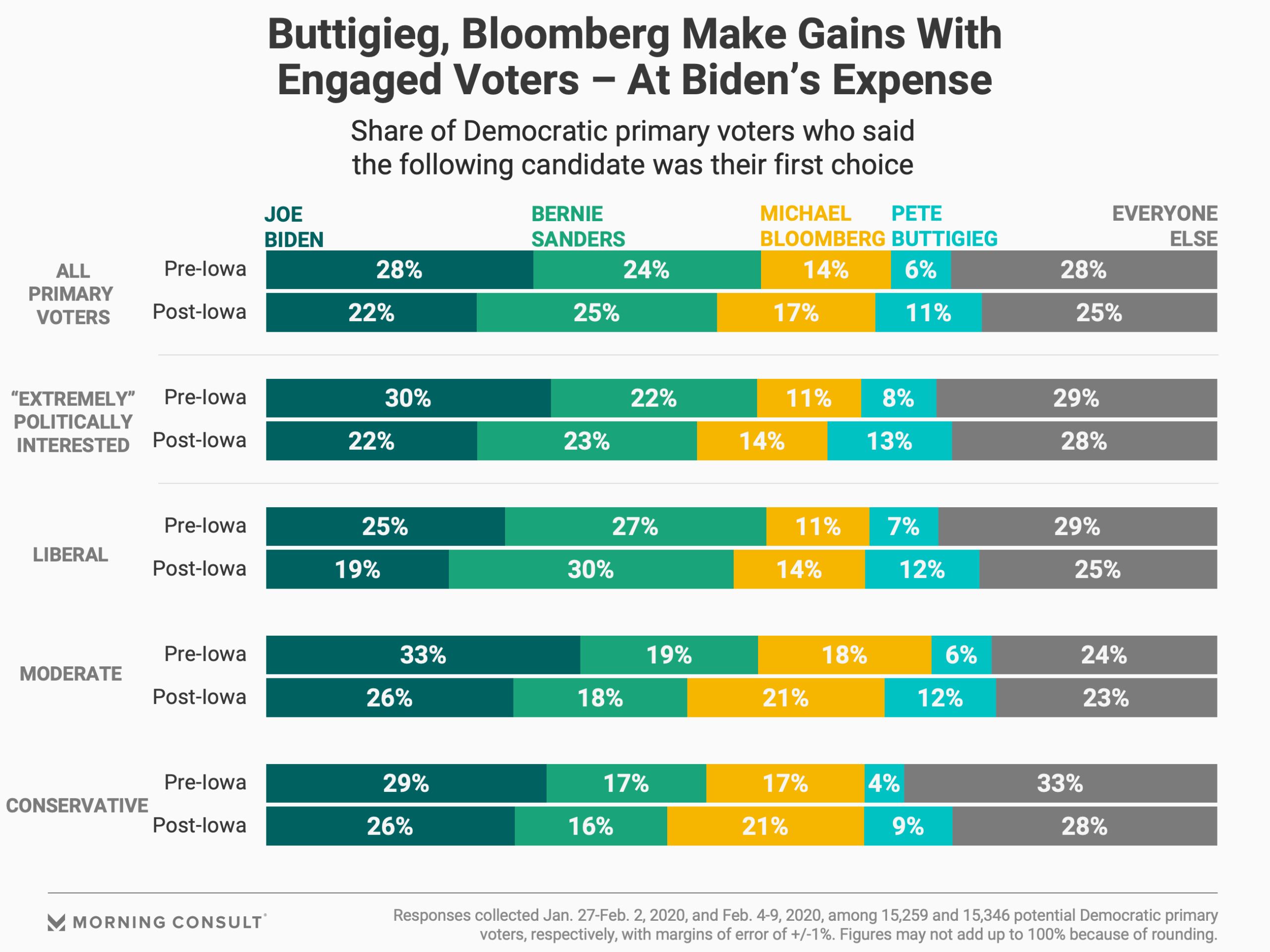 Overall, Biden’s share of first-choice support fell 6 percentage points since before the Iowa caucuses, placing him at 22 percent, 3 points behind Sanders, who picked up 1 point over the same time period. Since Iowa, Bloomberg has seen his first-choice support jump 3 points, to 17 percent (third place), and Buttigieg rose 5 points to 11 percent.

Buttigieg is now tied with Sen. Elizabeth Warren (D-Mass.), who saw declines or no significant change across various demographic groups and whose first-choice support fell 3 points since the pre-Iowa survey, which was conducted Jan. 27-Feb. 2. Both polls had a 1-point margin of error.

Increases in support across the board for Bloomberg, who is not competing in nominating contests until Super Tuesday, were more incremental, while Buttigieg’s bumps were more dramatic, a reflection of the momentum following his narrow victory in Iowa, as detailed by the Iowa Democratic Party’s count of state delegate equivalents, but also his lower share of support heading into the caucuses. 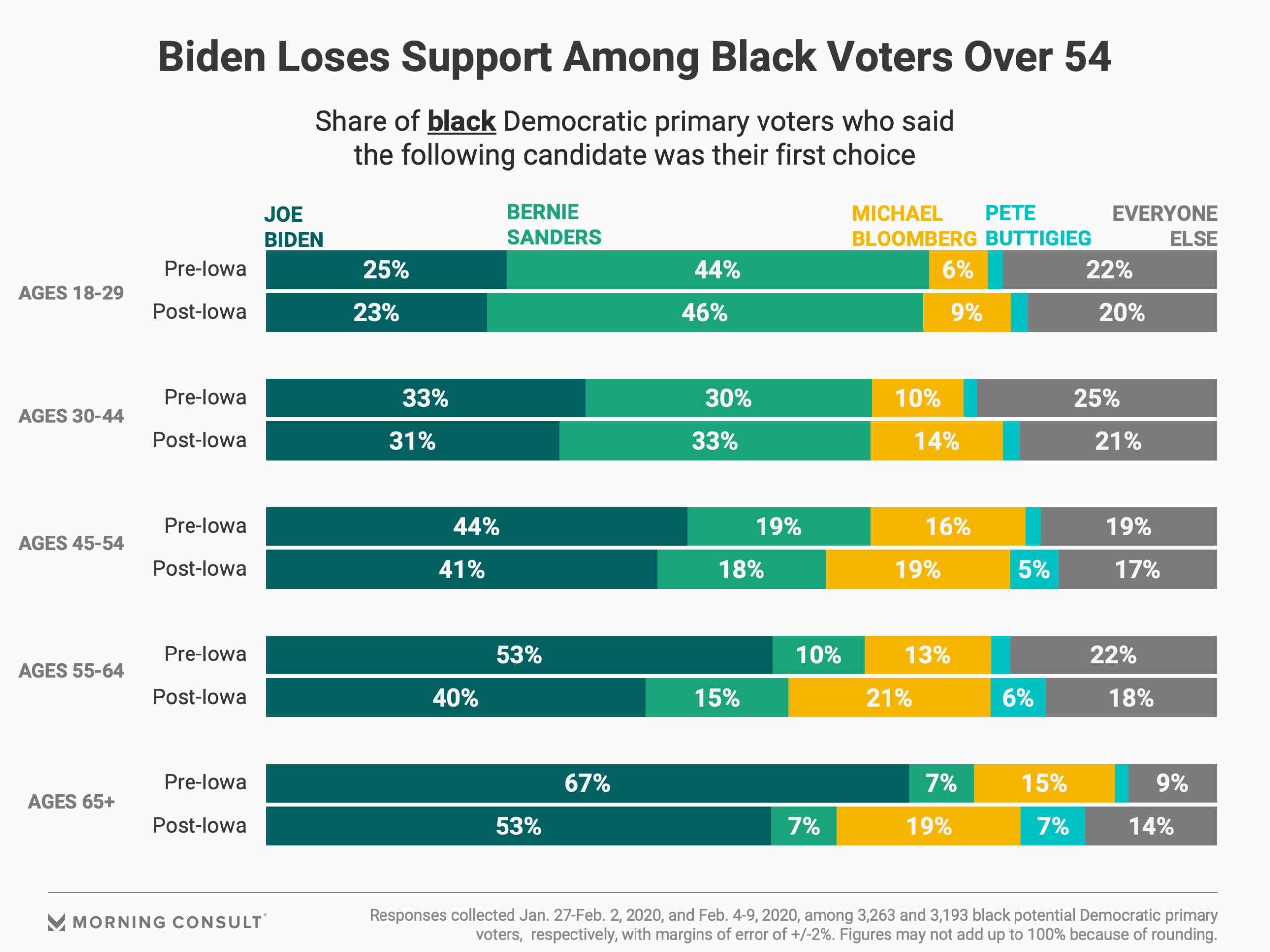 Biden’s rock-solid support with black voters has been a longstanding feature of his party’s race for president, but his performance in Iowa appears to have shaken his standing with the pivotal Democratic constituency. His first-choice status dropped across the board with African Americans, including a 13-point drop among black voters ages 55-64 and a 14-point drop among the oldest black voters, ages 65 and older.

Both Bloomberg and Buttigieg are beneficiaries of Biden’s faltering among black voters older than 45 as the primary moves to more ethnically diverse states, Nevada and South Carolina, following contests among the predominantly white electorates in Iowa and New Hampshire.

But doubling his support with black voters only garnered Buttigieg 4 percent of their vote, and Bloomberg (with 16 percent support) appears better-positioned to capitalize on further Biden struggles in diverse, delegate-rich states on Super Tuesday.

Plus, at 27 percent support, Sanders now trails Biden by just 8 points among this voter bloc,  compared to 17 points before Iowa, and a victory in South Carolina later this month could prove decisive. 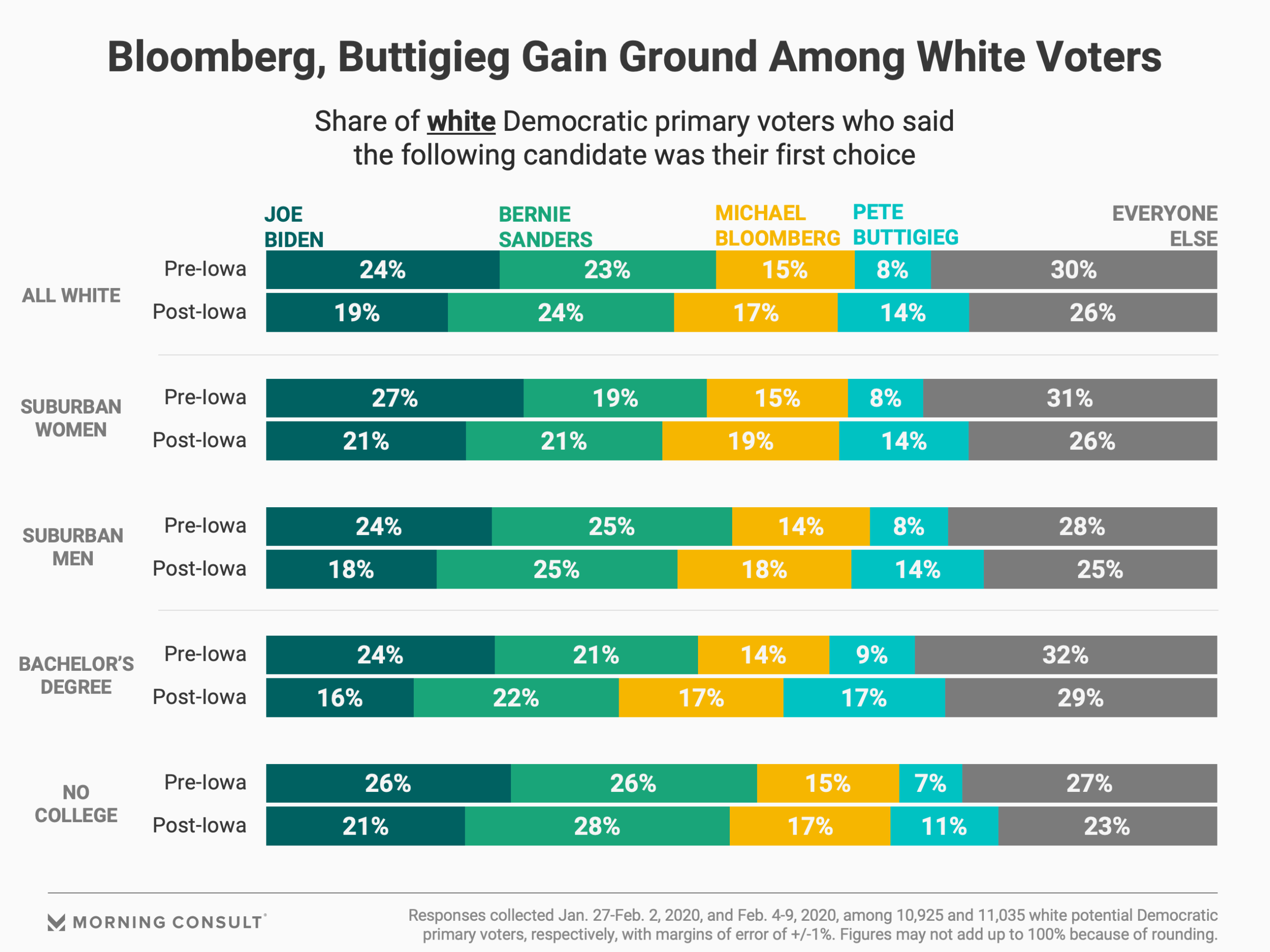 Buttigieg saw the biggest bounce among white voters (up 6 points, to 14 percent), including an 8-point improvement among those who have a bachelor’s degree — tying Bloomberg at 17 percent — and a 6-point improvement among suburban women, placing him behind Bloomberg, who has courted the group for years while advocating for gun control, and statistically tying Warren.