After issues with a vote tabulation mobile app delayed the results of the Iowa caucuses, voters are more likely to trust in analog voting methods than ballot systems that rely heavily on technology, according to a new Morning Consult/Politico survey.

Among a sample of 1,996 registered voters, 71 percent said they were at least somewhat confident in the more traditional form of voting — electronic voting machines that provide paper receipts — to count their ballots accurately, compared to 22 percent who said the same about those cast through mobile apps. Thirty-seven percent said they had no confidence at all in mobile app voting, the highest share of the methods surveyed.

The survey, which was conducted Feb. 7-9, has a margin of error of 2 percentage points.

The Iowa Democratic Party didn’t release the full results of its Feb 3. caucuses until Sunday after irregularities in the voting data collected by an app created by Shadow Inc. forced a manual vote count. The app, which the New York Times reported was not properly tested before the contest, won’t be used in Nevada’s Feb. 22 caucuses, after the state party abandoned the idea following the issues in Iowa.

In the survey, voters were more likely to trust methods that involved paper than those that relied on technology. Hand-counted paper ballots and mail-in votes came in at 57 percent and 47 percent respectively, compared to 21 percent of voters who had some confidence in blockchain-enabled systems to count their vote. Voters across party lines were inclined to answer in the same way. 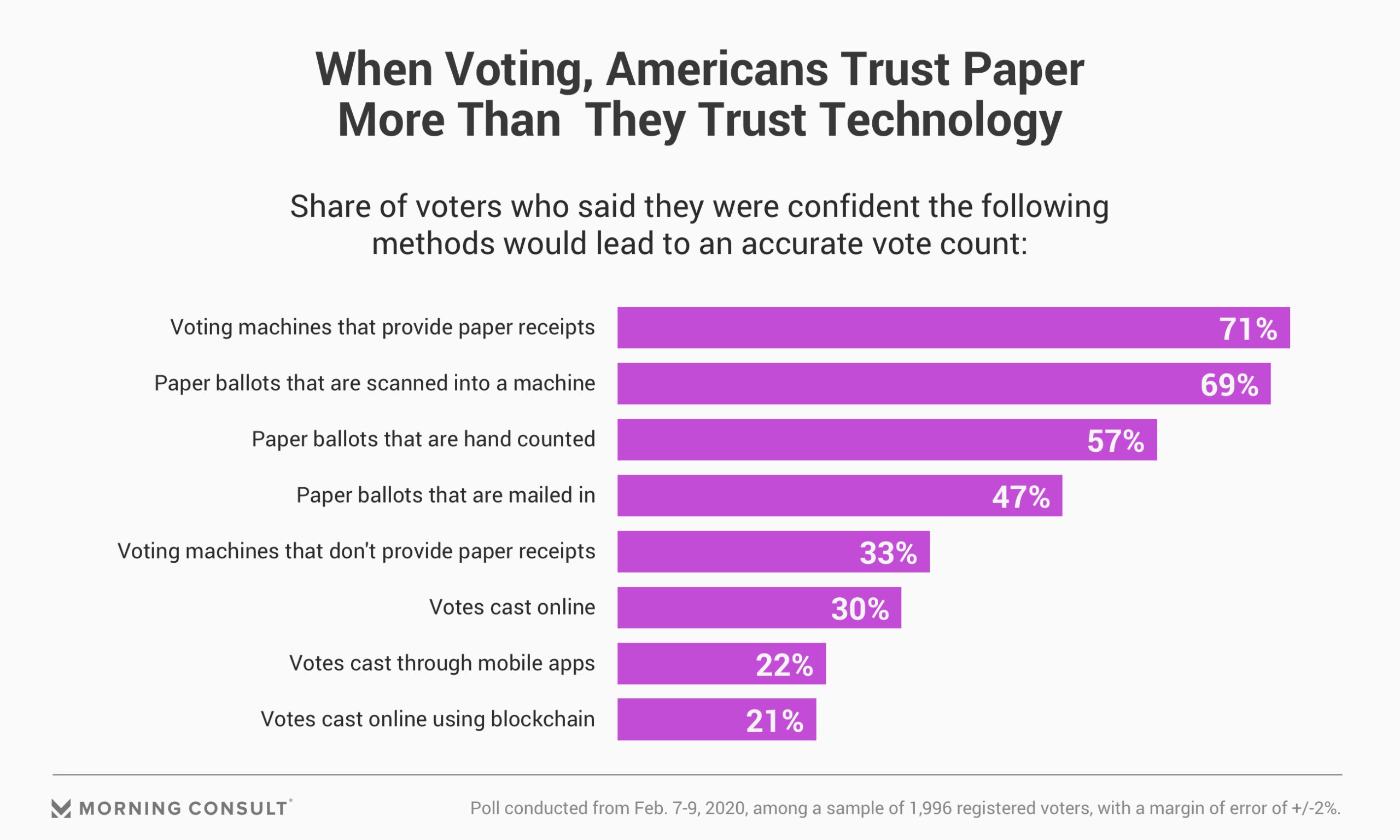 However, the survey indicates the likelihood of voters heading to the polls declines if their state decided to only rely on one of the aforementioned options, though the drop is more pronounced for high-tech methods. While 85 percent of voters overall said they were likely to vote in the 2020 presidential elections, that number drops to 70 percent if they could only cast their votes via an electronic voting machine that provided paper receipts. Forty-six percent said the same about voting only through a mobile app and 44 percent about blockchain-enabled systems.

While voters are more likely to trust systems that at least have a paper-based backup, roughly 30 percent of states in 2018 used electronic voting machines that don’t provide a paper receipt in at least one jurisdiction, according to a June study by the U.S. Election Assistance Commission, which said almost 40 percent of states have electronic voting machines that also record votes on paper.

Six of the remaining Democratic presidential candidates, including Sens. Bernie Sanders (I-Vt.) and Elizabeth Warren (D-Mass.) have put out plans to require that states use paper ballots.