Majority of voters still approve of handling of outbreak by president, health agency

Less than one month after the U.S. government declared the coronavirus a formal public health emergency, top health officials on Tuesday escalated their warnings about a nationwide outbreak, announcing that the spread of the respiratory infection is inevitable. A new Morning Consult poll finds that as President Donald Trump continues to urge calm amid news reports of the scale of the outbreak, voters’ approval of his response to the situation has begun to slip.

According to the Feb. 24-26 survey, conducted as the White House acquiesced to calls from public health officials to request more emergency supplemental funding from Congress to combat the infection in the United States, net approval — the share of people who approve minus the share who disapprove — of the job Trump is doing in handling the outbreak has fallen 11 points among registered voters. 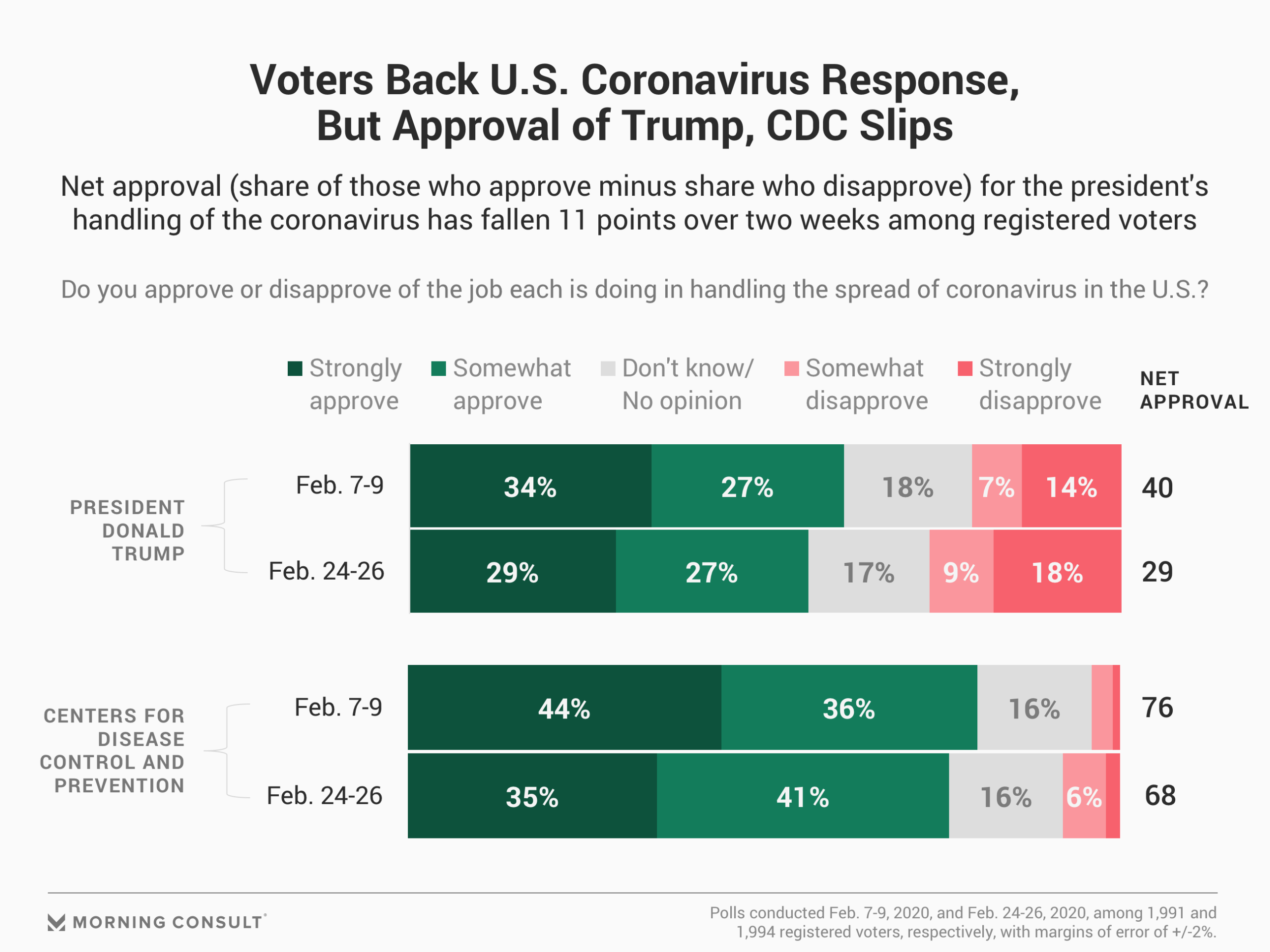 Overall, the majority of voters still approve of both Trump (56 percent) and the CDC (76 percent) as they navigate an unpredictable landscape, but the fray in support just as officials warn that the United States is on the precipice of sustained local transmission could signal trouble down the road. The survey has a margin of error of 2 percentage points, while net support has a margin of error of 4 points.

The drop in approval for Trump runs alongside a slightly smaller 8-point drop in voters’ net approval for the Centers for Disease Control and Prevention, which has confirmed problems with its coronavirus test in recent days that have hampered state public health departments’ ability to accurately screen patients.

Over the past two weeks, the share of voters who say the United States needs to do more to address the outbreak jumped 12 percentage points, to 35 percent from 23 percent. The share who believe the response is appropriate in scale fell to 49 percent from 61 percent, a drop fueled mostly by Democrats and independents.

Related: U.S. Coronavirus Response Has More Public Support Than Handling of Ebola in 2014

Eric Feigl-Ding, an epidemiologist and health economist at the Harvard Chan School of Public Health, said there is frustration growing among voters and lawmakers of all political stripes. At a Senate Appropriations subcommittee hearing on the coronavirus Tuesday, Republican Sen. John Kennedy (R-La.) pressed acting Homeland Security Secretary Chad Wolf on his inability to answer questions on U.S. preparedness, and some Republicans have joined Democrats in urging Trump to appoint a coronavirus czar to oversee the government’s response.

“You can see fractures coming in,” Feigl-Ding said. “The public is getting mad at the administration for downplaying” the severity of the threat.

Ahead of his planned White House news conference on the coronavirus Wednesday at 6 p.m., Trump blasted the media on Twitter for “doing everything possible to make the Caronavirus [sic] look as bad as possible, including panicking markets.” By market close on Tuesday, after top health officials warned of severe disruptions to daily life in the event of a U.S. epidemic, the Dow sank by 880 points, marking its largest two-day point decline in history.

Optimistic comments from the president and White House economic adviser Larry Kudlow stood in stark contrast to remarks from the CDC’s National Center for Immunization and Respiratory Diseases Director Nancy Messonnier, who said the time has come for businesses, schools and hospitals to prepare for closures and supply shortages.

The poll found sweeping public support for the White House’s request for additional funding, but Democratic lawmakers immediately criticized the administration for seeking less than $2 billion in new funding, arguing it is insufficient to address the magnitude of the outbreak. 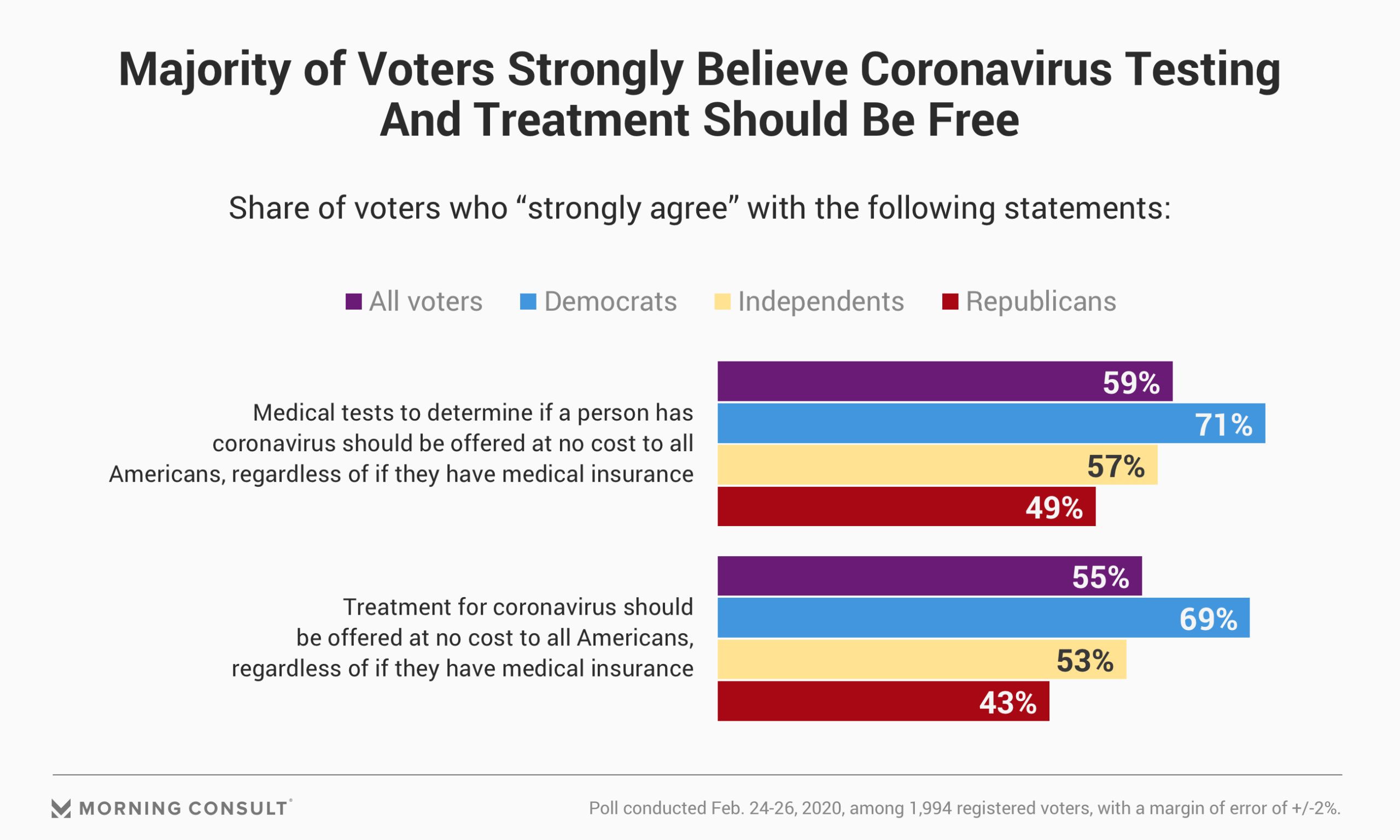 The data also shows overwhelming support for offering free medical screening and treatment for the coronavirus for all Americans, including the uninsured, with a majority of voters saying they “strongly agree” the United States should offer zero-cost testing and treatment. Physicians and public health experts have raised concerns that barriers to care are especially dangerous during an epidemic, given the paramount importance of assuring every case is diagnosed promptly to diminish the risk of spread.

Purvi Parikh, an allergy and infectious disease doctor in New York, said her concern for patients becoming infected is low for now but that the long-term impact on health systems will depend on how fast physicians can make the diagnosis.

Feigl-Ding, who posed a similar question about free care on Twitter over the weekend, said the bipartisan support underscores how rigid ideologies can fall away in the face of infectious disease. The positive response from conservative voters to free health care, Feigl-Ding said, signals that in the case of the coronavirus, Republicans see the value in getting the government to front the cost of treating someone else’s infection.