Black Americans Are Divided Over Their Comfort With Socialism

As Black History Month comes to a close and the Democratic Party’s nominating contest fully shifts toward states with larger black populations, Sen. Bernie Sanders (I-Vt.) finds himself in a position that would have surprised most political pundits four years ago — the presidential candidate of choice for black voters.

Forming the bedrock of that support are younger black voters, who are backing Sanders at a huge rate: Forty-six percent of black Democratic primary voters under the age of 45 said in a new Morning Consult survey that they’d vote for Sanders if the primary or caucus were held in their state today, roughly three times the share garnered by his closest rivals, former New York City Mayor Michael Bloomberg (17 percent) and former Vice President Joe Biden (15 percent).

By contrast, black primary voters ages 45 and up were roughly twice as likely to back Biden as they were Sanders, with Bloomberg polling slightly better than the Vermont senator among this group.

That yawning gap in Sanders’ support on either side of 45 appears to be driven in no small part by perceptions of his stated ideological identity as a democratic socialist. Black primary voters under the age of 45 were 20 percentage points more likely than the older cohort to say that they believe America should move away from capitalism and toward socialism. While 39 percent of older black voters said the country should maintain its current balance of socialism and capitalism, 24 percent of younger black voters agreed.

This ideological divide has helped lay bare the generational schism within the Democratic Party that has been percolating for years. Younger white and Latino Democratic primary voters were also significantly more likely than their elders to say that they believe the United States should give capitalism the cold shoulder.

Related: Most Democrats Think Obama Has Endorsed a Democrat for President. (He Hasn’t.)

Similarly, those younger voters were roughly twice as likely as older voters to agree that “the Democratic Party is too embracing of capitalism.”

While younger black Democratic primary voters hold the balance of America’s economic system in similar regard as their generational peers, the chief motivator driving their vote choice is a more distinguishing characteristic, Morning Consult data shows. 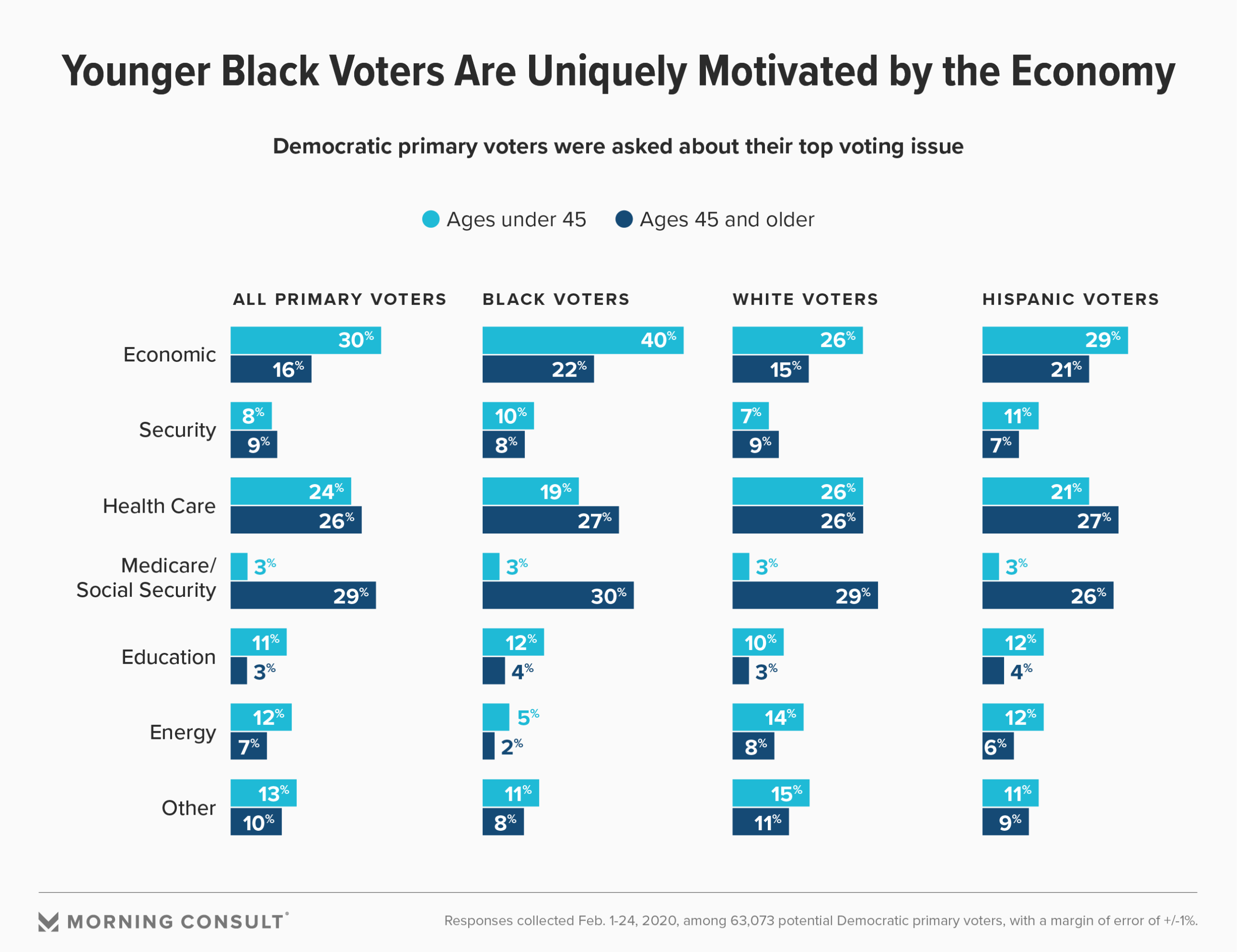 Forty percent of the 6,795 black Democratic primary voters under the age of 45 surveyed from Feb. 1-24 cited economic issues such as taxes, wages, jobs, unemployment and spending as their top priority when it came to how they plan to vote. While younger voters tend to prioritize the economy over older voters — who are more likely to be concerned with health care issues or entitlements such as Social Security and Medicare — younger black voters also stood out from their white and Hispanic counterparts on the question.

The emphasis that these younger black voters place on the economy, coupled with their strong preference for Sanders, could be heartening for Democrats who are concerned about the New England firebrand’s palatability to the general electorate. Following a 2016 election that saw depressed Democratic turnout among black voters in key states such as Pennsylvania, Michigan and Wisconsin, Sanders’ appeal among younger black primary voters could carry over to November and energize voters who are typically less likely to show up on Election Day.

For years, Sanders has been among the louder voices on the left in criticizing former President Barack Obama for not pushing hard enough for large-scale change during his two terms in office, and the survey also found younger black primary voters slightly more likely than their elders to express disillusionment with his record.

Roughly 3 in 10 younger black Democratic primary voters agreed that Obama’s presidency “did not live up to its promise,” compared with 16 percent of black primary voters 45 and older.

That’s not to say that these younger voters doubt the power and influence that the country’s 44th president still wields.

Obama, along with former first lady Michelle Obama, was top among black figures listed in the poll, with nearly 100 percent of black voters on either side of the age-45 divide saying both were either very or somewhat influential.