63% would be less likely to go to a concert; 62% said same about going to movies, theater and amusement parks

Supporters wear medical masks, as fears of coronavirus increase in California, during a campaign rally for presidential candidate Sen. Bernie Sanders on March 1 in Los Angeles. In a new Morning Consult poll, 58 percent of adults said they'd be less likely to attend a political rally if coronavirus came to their community. (David McNew/Getty Images)
By Sarah Shevenock

As the coronavirus continues to dominate the news cycle and new cases are discovered in the United States, new polling finds that while consumers aren’t currently ready to change their behaviors such as going to the movies or attending work functions, most would do so if the virus were to spread to their community.

A Feb. 28-March 1 Morning Consult survey of 2,200 U.S. adults found that 74 percent of respondents were concerned about the outbreak of coronavirus. 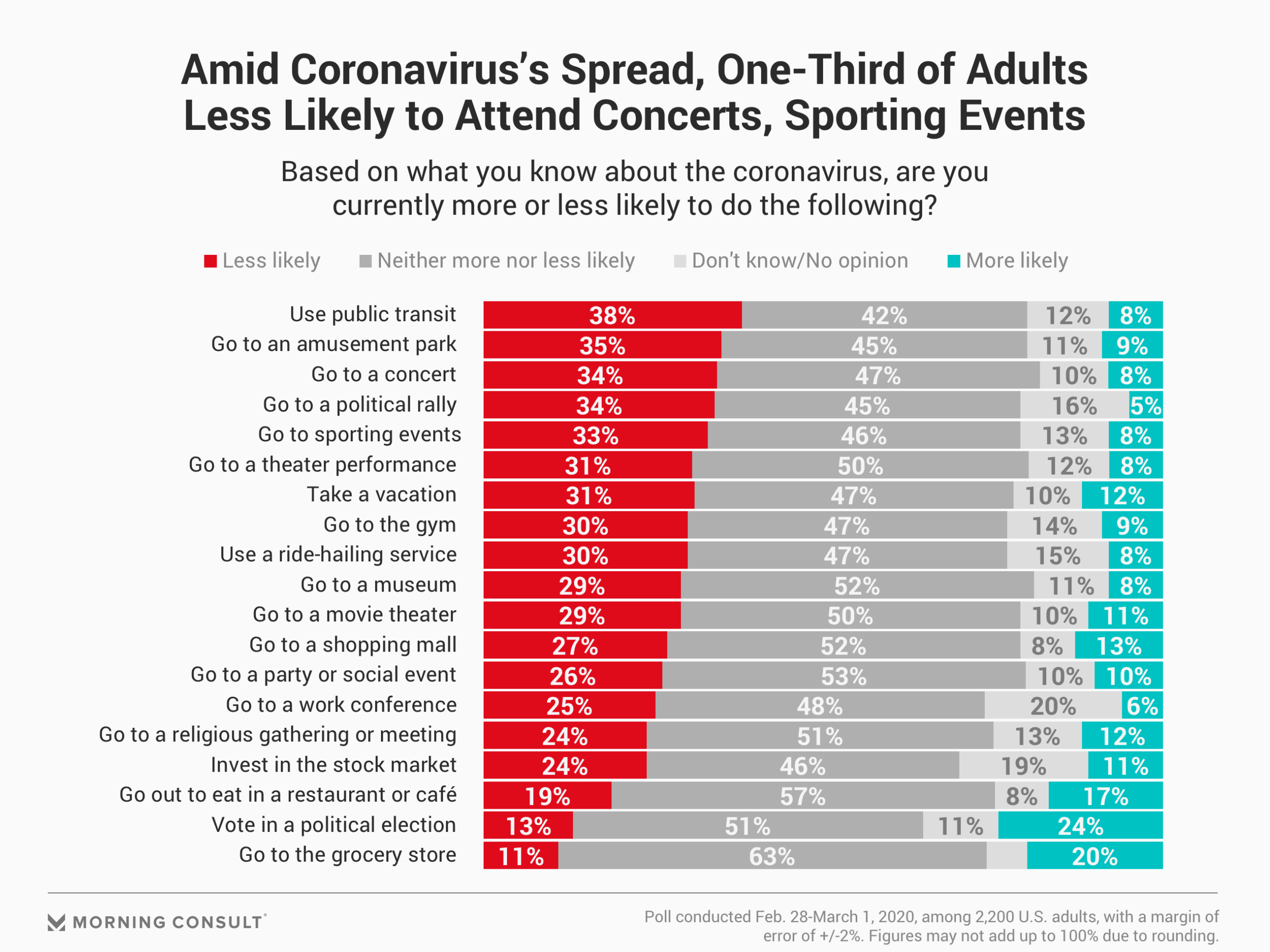 And as the 2020 election cycle kicks into high gear, the coronavirus could also hit rally attendance: While 45 percent of respondents said the virus outbreak in its current state would not impact their likelihood of attending a political rally, 58 percent said they would be less likely to attend such an event if the coronavirus spreads locally. 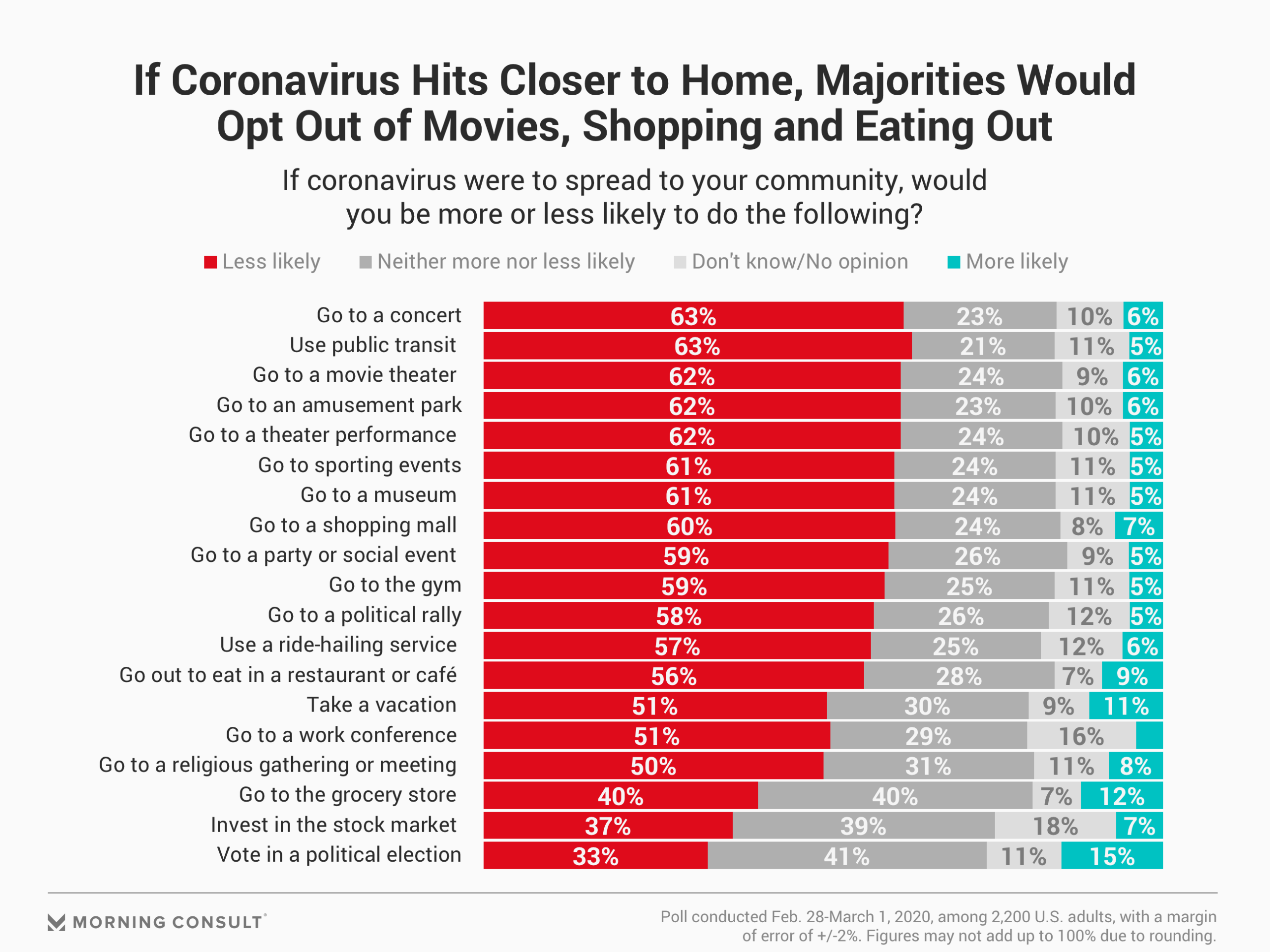 The local spread of the coronavirus was least likely to impact respondents’ voting, stock market investments and grocery shopping habits, with roughly 2 in 5 respondents each saying they would be neither more nor less likely to practice those behaviors if the virus came to their community.

While the poll indicates that the virus is currently unlikely to radically change consumer behavior, a separate Feb.28-March 1 survey showed 57 percent of respondents were concerned about the virus’ impact on their local economy. Many companies, including CNN, have restricted work travel, while several major conferences, including the Game Developers Conference and Facebook Inc.’s F8, have been canceled or postponed. And more than 20,000 people have signed a change.org petition calling for the cancellation of this year’s South by Southwest festival, scheduled for later this month, due to fears that the coronavirus could spread from travelers coming to the Austin, Texas, event.

Related: The U.S. Is Struggling to Contain Coronavirus. Voters Have Taken Notice

On the music side, BTS has canceled April tour dates in Seoul, while Green Day and Avril Lavigne have postponed tour dates in Asian countries.

In the wake of movie theater closures in China and Japan, the largest James Bond fan site posted an open letter to EON, MGM and Universal asking for the release of the new film, “No Time To Die,” to be moved from its April 10 release to a date later in the summer, noting that both China and Japan have closed movie theaters and that fans from all over the globe, gathering to watch the film, could expose more people to the virus.

And while AMC Entertainment Holdings Inc. does not have movie theaters in China or South Korea, it cited “widespread health emergencies, such as the novel coronavirus or other pandemics or epidemics” as an investor risk in its latest earnings call, with Chief Executive Adam Aron noting the company is “vigilantly monitoring” the coronavirus epidemic and that a major U.S. outbreak “would be a big problem for us.”