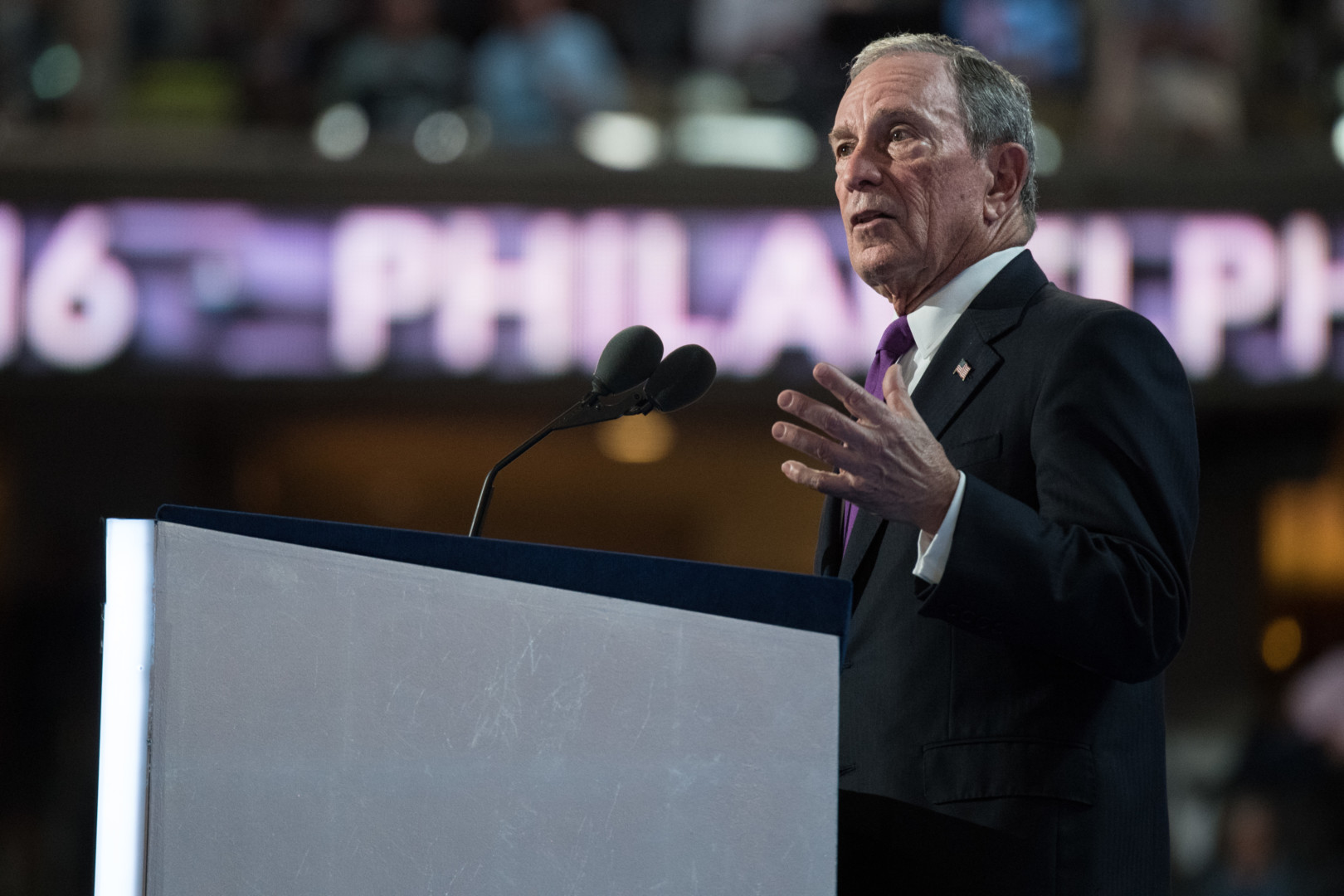 Sixty-five percent of respondents in a recent poll said they'd seen a TV ad for for New York City Mayor Michael Bloomberg, compared to 79 percent who said they had not seen an ad on any medium for Rep. Tulsi Gabbard. (Rob Kunzig/Morning Consult)
By Sarah Shevenock

As Super Tuesday approaches and candidates continue to compete for voters’ attention on the airwaves and small screens, new polling finds that former New York City Mayor Michael Bloomberg and President Donald Trump are leading the television advertising battle, with more than 6 in 10 adults saying they’ve seen an ad for one of the two candidates on TV.

A Feb. 21-23 Morning Consult/The Hollywood Reporter survey of 2,200 U.S. adults found that on average, roughly 43 percent of respondents had seen an advertisement for a Democratic presidential candidate or Trump on television. Bloomberg and Trump ads were the most pervasive, with 65 percent and 62 percent of adults, respectively, saying they had seen ads from the candidates. Sen. Bernie Sanders (I-Vt.), came in at No. 3 with 59 percent of adults saying they had seen a television ad from him. 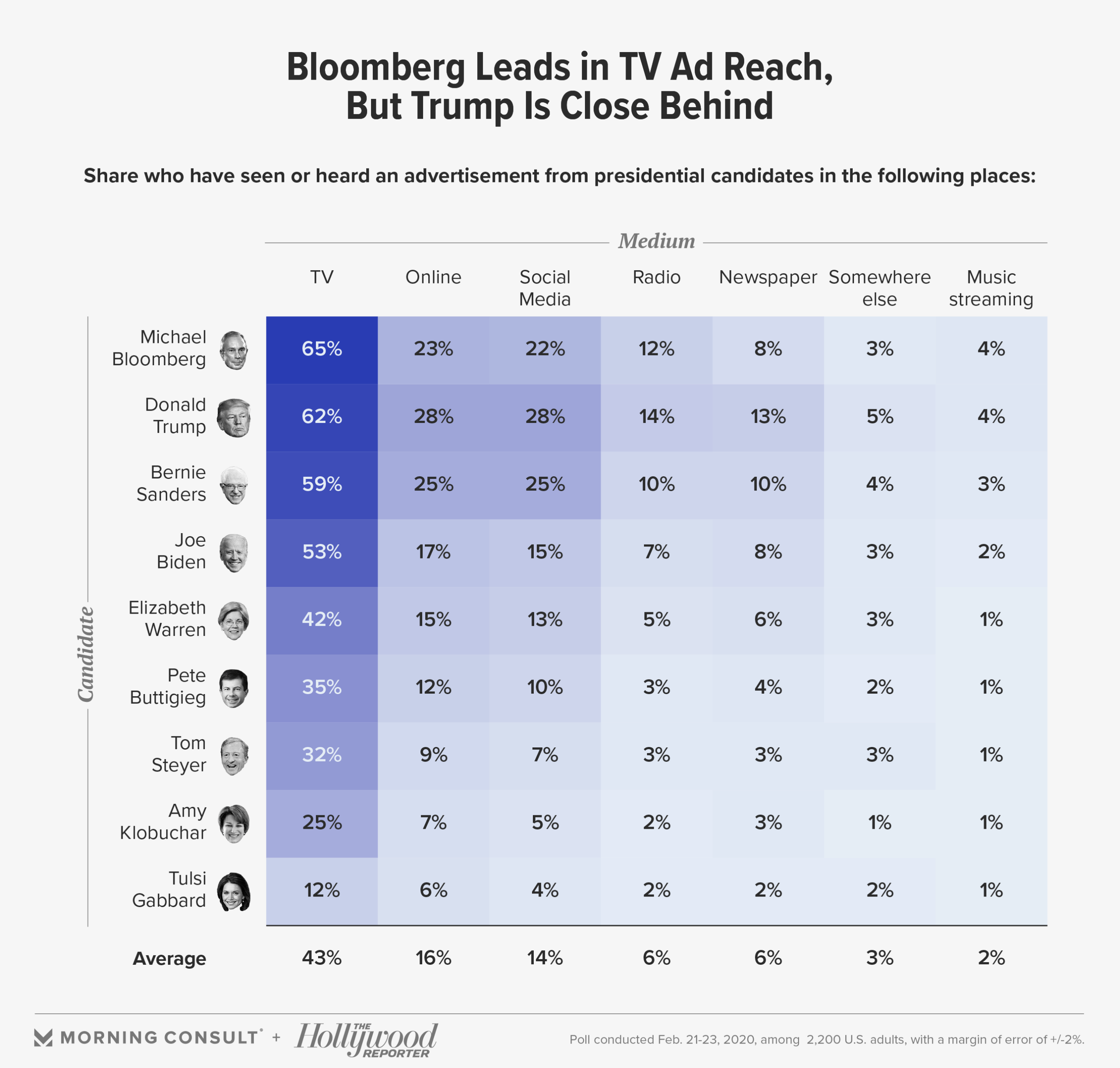 Ads from Rep. Tulsi Gabbard (D-Hawaii) and Sen. Amy Klobuchar (D.-Minn.) were the least likely to make an impression on respondents: Seventy-nine percent of those surveyed said they had not seen a campaign ad from Gabbard on any medium and 68 percent said the same about Klobuchar.

A Morning Consult poll of 2,656 voters who indicated they may vote in the Democratic primary or caucus in their state, which has a 2-point margin of error, was mostly conducted before former South Bend Mayor Pete Buttigieg of Indiana ended his campaign on Sunday night. The survey found 29 percent of Democratic primary voters nationwide said they’d vote for Sen. Bernie Sanders (I-Vt.) if the Democratic primary or caucus were held in their state today, while 26 percent said they’d vote for former Vice President Joe Biden. Bloomberg was third, at 17 percent.

Klobuchar has invested in a seven-figure TV ad buy across half of the Super Tuesday states ahead of the March 3 primary contest, according to Politico. But per a FiveThirtyEight analysis, Bloomberg is leading all candidates in television ad spending, shelling out an estimated $407 million on TV ads as of Feb. 28. Of the candidates included in the survey, Gabbard has spent the least, with an estimated $1.62 million in ad buys.

Related: Nearly 9 in 10 People Said No Celebrity Endorsement Would Sway Their Vote

Two-thirds of all respondents, including 58 percent of Democrats and 72 percent of Republicans, said there are too many political ads on television. Republicans were most likely to be displeased with the amount of presidential election coverage on the small screen, with 48 percent saying there is too much 2020 content on TV. In contrast, a slim majority of Democrats (53 percent) and a plurality of all adults (47 percent) said there is just enough televised 2020 election coverage.

The Democratic and Republican subsamples each have a margin of error of 4 points.

This story has been updated with the latest survey of Democratic primary voters.