Super Mario Bros. Is the Video Game Fans Want in Theaters Next

“Sonic” was a surprise success at the box office, bringing in more than $70 million in its opening weekend and grossing more than $200 million to date at the worldwide box office. After the video game film’s unprecedented showing, new polling finds that there are five video game titles the public is most likely to be interested in seeing on the silver screen, with Nintendo’s 1980s classic Super Mario Brothers leading the pack for a variety of different audiences.

A Feb. 21-23 Morning Consult/The Hollywood Reporter poll found that Super Mario Bros. was the top title for adaptation among all adults, as well as video game users (defined in the survey as those who play video games on a computer, game console or cellphone), parents and non-parents. 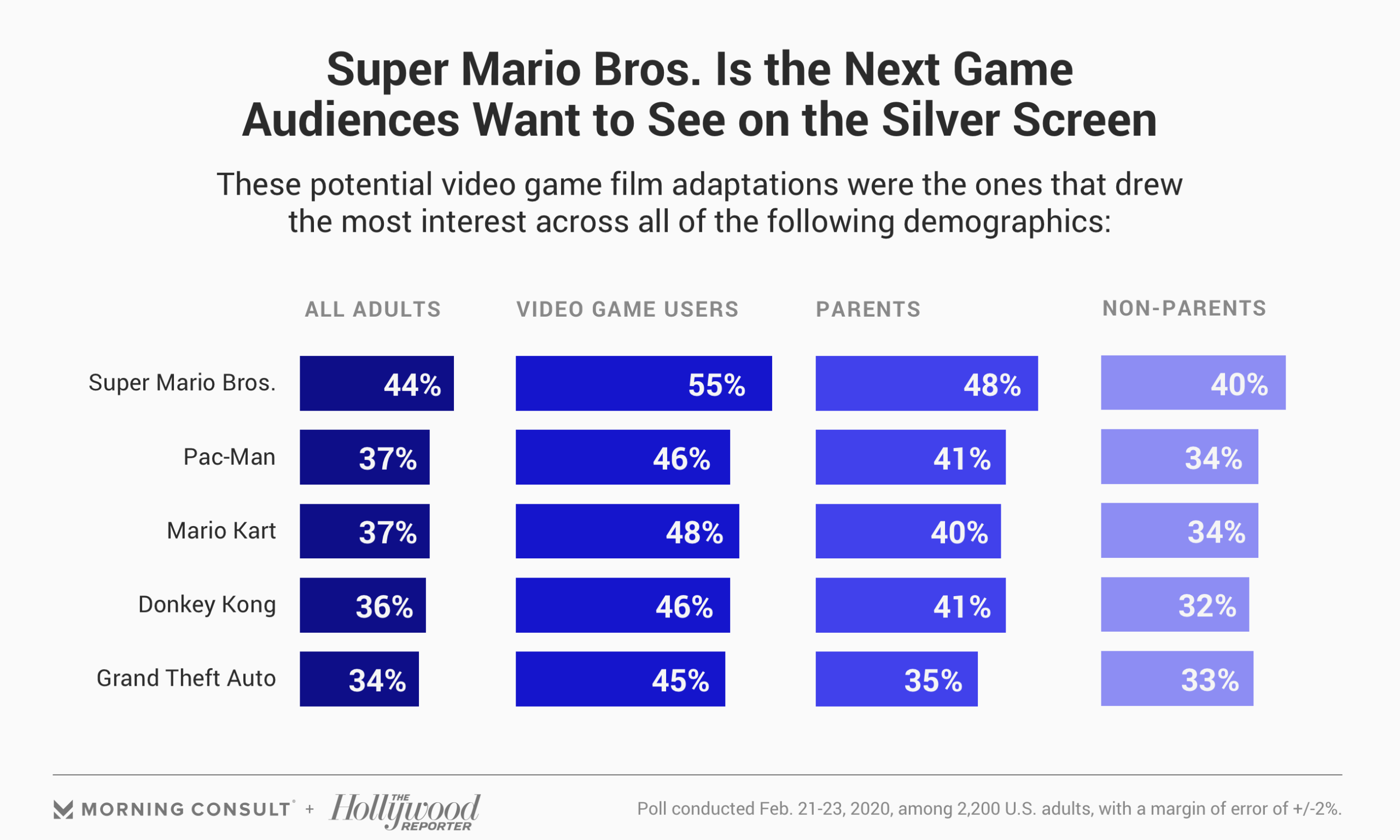 Forty-four percent of the 2,200 U.S. adults surveyed, including 55 percent of video game users and 48 percent of parents, were interested in seeing a film adaptation of the 1983 video game. A plurality of parents were also keen on arcade classics like Pac-Man and Donkey Kong, with 41 percent showing interest in movie adaptations of those titles.

The box office haul of “Sonic” was bolstered in part by parents and children heading out to see the PG-rated film when it opened Feb. 14., as it was the only kid-friendly movie that opened over the long Presidents Day weekend.

Twenty-nine percent of women said they would be interested in a film adaptation of Tetris, making it the fifth choice for that group. In 2016, Empire Magazine reported producer Larry Kasanoff was working on developing the block-moving game into a trilogy of films to cover the “big story.”

The male and female subsamples have a margin of error of 3 points.

While Grand Theft Auto was the top pick for respondents ages 18-29, 57 percent of the age group was also interested in a Super Smash Brothers film, while half said the same of a Call of Duty Film.

Among those ages 30-44, Super Mario Bros. was the top pick. Half of these respondents also said a film based on The Legend of Zelda would appeal to them.

A new Super Mario movie would not be Hollywood’s first attempt to adapt the game series on the silver screen: “Super Mario Bros.,” the 1993 film starring Bob Hoskins and John Leguizamo, made back less than half of its $48 million budget, according to Box Office Mojo, and currently has a 23 percent Tomatometer rating on Rotten Tomatoes.