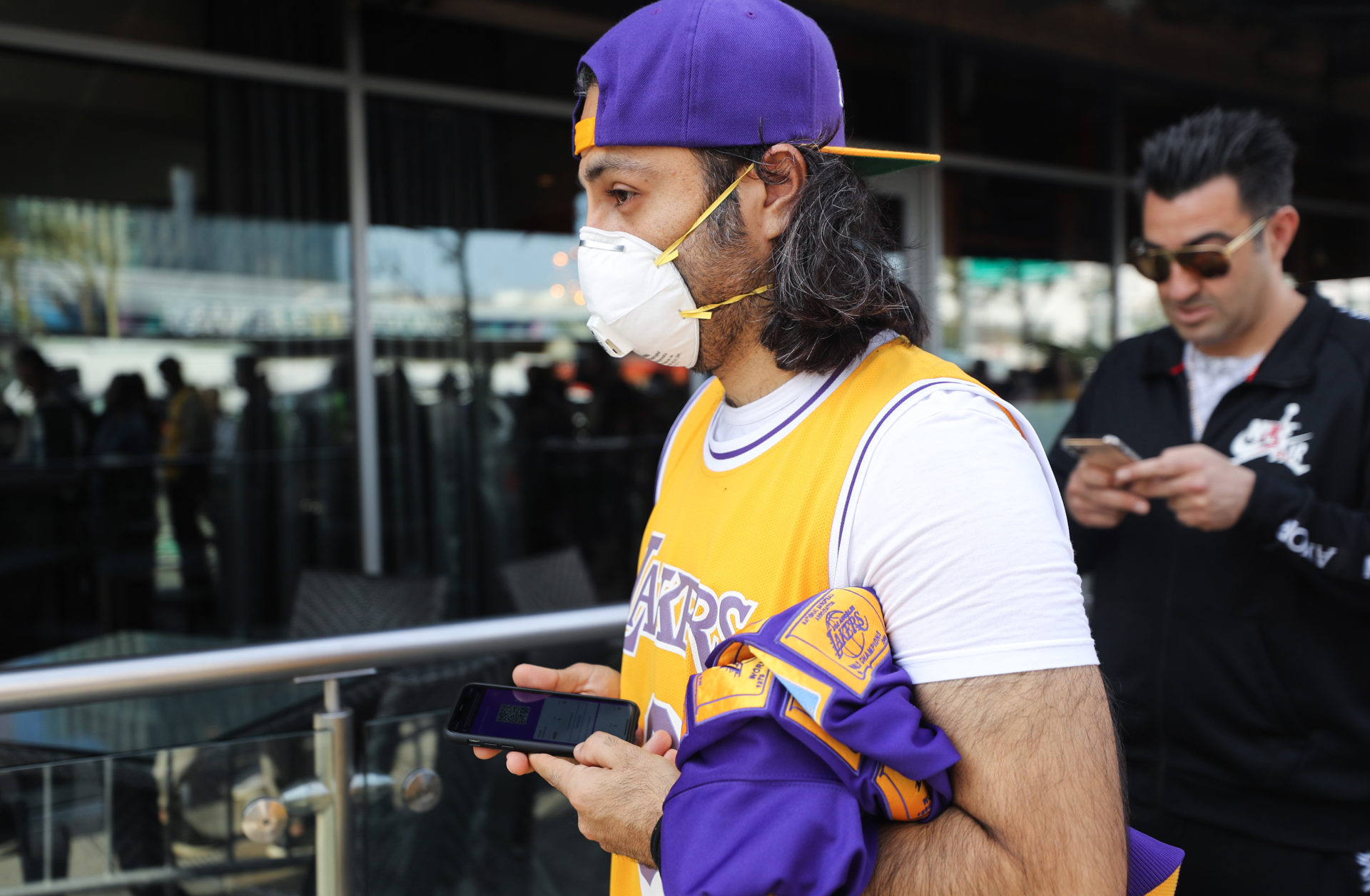 A fan wears a protective mask as people wait in line to attend a memorial for Kobe Bryant and his daughter, Gianna, at the Staples Center in Los Angeles on Feb. 24. As some municipalities caution against large-scale gatherings, legal experts say sports properties face legal risks by continuing to host fans. (Mario Tama/Getty Images)
By Alex Silverman

Sports properties that continue to host thousands of fans amid concerns about the coronavirus could be exposing themselves to credible and potentially costly civil litigation in the event that transmission of the virus is traced back to their facilities, according to several attorneys, especially in situations where local authorities have recommended cancelling all large gatherings.

California’s Santa Clara County on Monday became the first major U.S. municipality to legally prohibit large-scale gatherings such as sporting events due to the COVID-19 outbreak, a move that will force the San Jose Sharks to make alternative arrangements for at least three home games. Prior to the moratorium, the Sharks continued hosting games, going against strongly worded guidance from local authorities.

Similarly, the Golden State Warriors, who play in nearby San Francisco, hosted the Philadelphia 76ers at home on March 7 despite the San Francisco Department of Public Health’s recommendation that “non-essential large gatherings should be canceled or postponed.” As of now, the team is scheduled to host the Los Angeles Clippers Tuesday night at Chase Center.

Dan Etna, co-chair of New York-based law firm Herrick Feinstein LLP’s sports practice, said that while local health authorities are likely to be extremely cautious, their guidance could provide significant ammunition for anyone looking to hold a facility or team responsible for transmission of the virus.

“If 400 fans came down with the coronavirus, part of their claim will be that the various public health authorities in the relevant arena’s jurisdiction issued these bulletins and you went ahead and staged the event nonetheless,” he said during a Monday interview. “That’s clearly not a helpful fact for the stadium operators, as well as the team.”

While fans who attend a game generally assume the risk of injury from certain dangers intrinsic to the sport, such as being hit with a ball or puck, the same doesn’t necessarily apply to the risk of airborne disease. However, Etna said teams would likely argue that fans know the risk of attending a large public gathering amid the outbreak, given the massive amount of media coverage of the coronavirus.

“You’re not assuming the risk the same way you would if you got hit by a wayward puck or ball, but still, teams can take some solace in the fact that this is definitely out there front and center,” he said.

Fans entering the Chase Center for the Warriors-76ers game over the weekend were met with signs at each entrance informing fans that attending the game would increase their likelihood of contracting COVID-19 and stating that attendees assumed all risk by entering the building. A second sign told fans not to enter if they had experienced any symptoms recently or traveled to areas designated as high risk by the Centers for Disease Control and Prevention.

Talmage Boston, a Dallas-based partner at Shackelford, Bowen, McKinley & Norton LLP who is in the Texas Baseball Hall of Fame for his work as a media member and author, said he would advise teams to require fans to sign a document releasing the team and facility from liability prior to admitting them to the event.

He suggested emailing such a release to ticket holders in advance of the game, along with a message that spells out the potential risks involved, demonstrates the team’s efforts to create a safe environment and asks fans to sign the waiver and bring it to the game.

“On the one hand, we would like to have fans in the seats, but on the other hand, we have to protect ourselves in the event that the unlikely arises,” Boston said, outlining the potential message. “So, if you’re feeling 100 percent well and you’d like to attend the game, we’re making a commitment to do all we know how to do to make this place as safe as possible. Sign this release and bring it with you to the game.”

He added, “If there’s that kind of warning up front, if there’s a signed release by which the person is assuming the risk upon entry, I think that’d be a pretty darn hard lawsuit to win. If I was a plaintiff’s lawyer, I would really hesitate about the effect of that release.”

But Edward Schauder, who heads the sports law practice at New York-based Phillips Nizer LLP, said having every fan sign a waiver, electronically or on paper, prior to entry wouldn’t be doable or logical “and most of the time it wouldn’t be enforceable.” The Warriors’ signs, he said, were adequate in limiting liability if combined with proper steps to create a safe environment inside.

For now, sports properties and facilities that are continuing to hold events have taken myriad actions to mitigate their potential liability and fans’ exposure to the virus, such as distributing hand sanitizer upon entry to the venue, setting up sanitation stations throughout the facility, propping open doors to avoid unnecessary contact and posting hygiene tips on video boards.

It is unclear how many other local health departments across the country have issued recommendations similar to that of San Francisco. King County in Washington state, the epicenter of the U.S. COVID-19 outbreak, suggested in its most recent guidance that organizations “consider postponing events and gatherings.”

The next major professional sporting event in the area is scheduled for March 21, when the Seattle Sounders are supposed to host FC Dallas at CenturyLink Field (where a concessions employee already tested positive after an XFL game). Both San Francisco and Seattle are home to MLB teams, and while the league has said it plans to start its season on March 26 as scheduled, either municipality could throw a wrench into the situation by elevating its guidance into a mandatory legal ban like Santa Clara County.