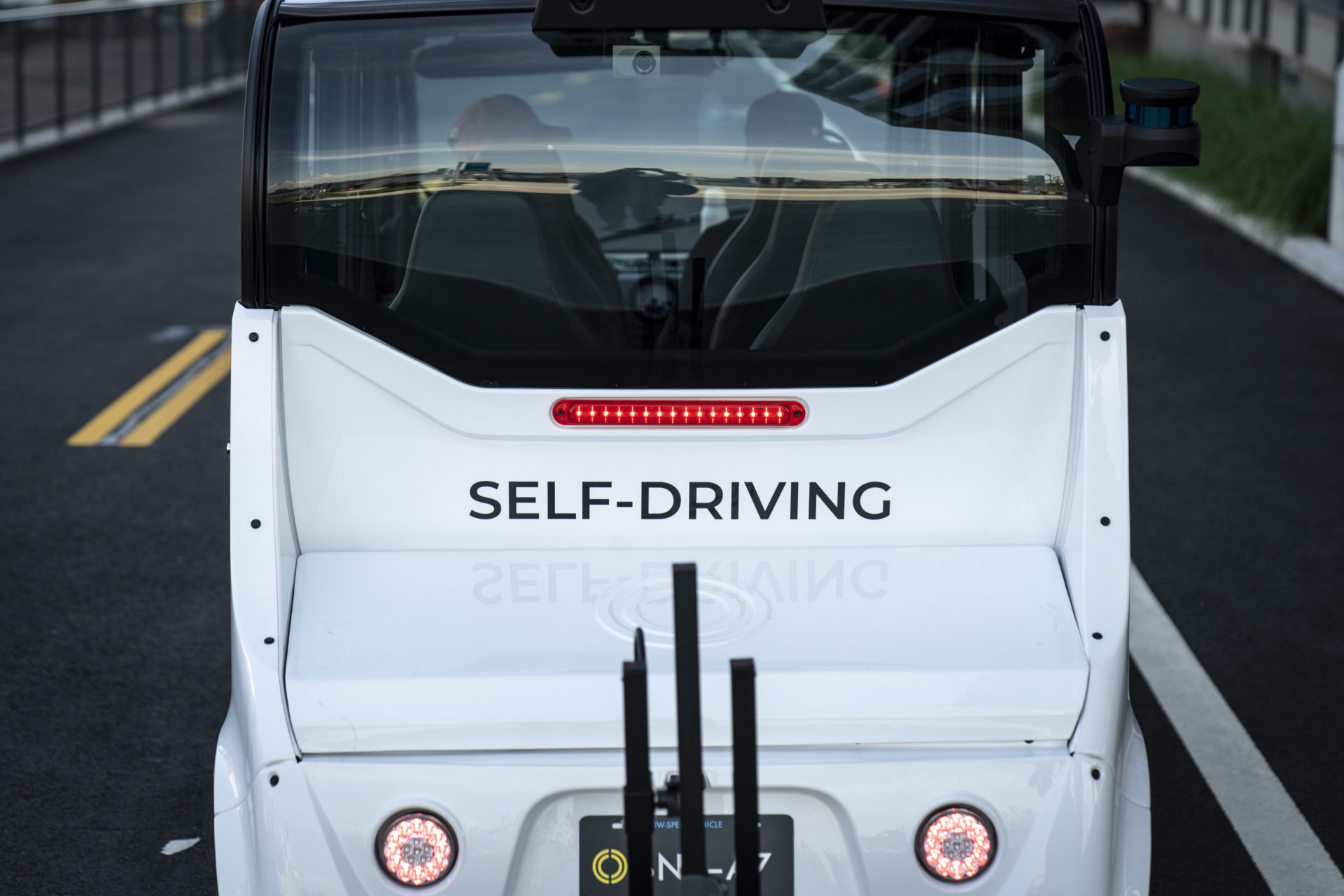 The Optimus Ride autonomous six-seater shuttle bus drives through the Brooklyn Navy Yard on Aug. 15, 2019 in New York City. Industry stakeholders say the issue of forced arbitration is a sticking point in negotiations for a self-driving car bill in Congress. (Drew Angerer/Getty Images)
By Sam Sabin

In the last Congress, an attempt to craft legislation to regulate self-driving cars got stuck on one key issue, which was whether to allow companies to include binding, forced arbitration contracts in their user agreements.

Two years later, the same issue is again emerging as the major sticking point in ongoing bicameral, bipartisan negotiations, according to aides familiar with the talks and interviews with stakeholders following a Feb. 21 deadline to submit feedback to lawmakers about a multipart bipartisan draft bill.

A House aide for a Democratic member of the Energy and Commerce Committee said the issue around forced arbitration has been the only one in the autonomous vehicles effort that has sparked debate, with most other issues being seen as possible considerations or technical.

Though congressional staffers have yet to share with stakeholders where they stand on including the language in their circulated staff draft bill — with the bill only saying that details on forced arbitration will “be supplied,” according to a copy seen by Morning Consult — the aide said it’s likely that the panel’s bill would ban forced arbitration, which would allow users to sue the companies.

But there’s always a chance that the Democratic House is willing to negotiate on this point as more Republicans in the Senate weigh in, the aide said.

Related: A Tech Stakeholder Group Is Solidifying Its Presence in the Scooter Regulatory Arena

A Republican aide familiar with the negotiations said that in the last few weeks, lawmakers agreed to the same deal it struck with the American Association for Justice, the trial lawyers’ lobby that opposes forced arbitration clauses, in the last Congress to bar forced arbitration in cases of death and bodily harm. But despite those concessions, the aide said, the lobby has been pushing for a total ban on forced arbitration, keeping it as the No. 1 issue holding up the bill.

Officials at the American Association for Justice deny that it has agreed to any deal with lawmakers and said that it has consistently pushed for a complete ban on binding forced arbitration clauses. Julia Duncan, the association’s senior director of government affairs, said in an interview that even in the last Congress, the officials say they were never fully on board with an agreement to include language that would only relate to death and bodily harm.

Jason Levine, executive director of consumer advocacy group Center for Auto Safety, said it feels like the conversation around forced arbitration is louder during current discussions about an autonomous vehicles bill because of the bipartisan, bicameral nature of current negotiations. In the previous Congress, the House passed its SELF-DRIVE Act (H.R.3388) by September 2017, leaving more than a year to negotiate in the Senate before the session ended.

Levine also said the growing size of Uber Technologies Inc., Google’s Waymo, Apple Inc. and other “nontraditional” technology company players in the self-driving car space has drawn even more attention to the issue.

“The history, though limited as it may be, of technology companies and their direct interaction with consumers has often included pre-dispute, binding arbitration clauses,” Levine said. “So why is it coming up now? Because you have companies involved in potentially producing and selling cars or technology involving cars that have a history of using and relying upon pre-dispute arbitration agreements.”

Jamie Boone, vice president of government affairs at the Consumer Technology Association, which represents companies like Lyft Inc. and Nuro, which won the first federal safety approval last month for a purpose-driven self-driving vehicle, said that it’s hard to know how the organization’s members will respond if the bill were to include language regarding forced arbitration.

But she cited language barring pre-dispute forced arbitration clauses in user agreements as a “huge tipping point” for the association during the 2017-18 congressional talks. At the time, the group found it “incredibly difficult to sign off on any kind of legislation that limits arbitration.”

The autonomous vehicles bill is not the place to discuss forced arbitration, she contended.

“In no way, shape or form should forced arbitration be a part of that conversation,” Boone said, adding that the better place to discuss the issue is in a separate bill from the Judiciary committees, such as the FAIR Act, or H.R.1423. In September, the House unanimously passed that bill, which came through the House Judiciary Committee. It would prevent pre-dispute forced arbitration clauses from being enforceable in cases related to employment, consumer, antitrust or civil rights — which would include incidents involving self-driving cars.

Industry stakeholders, including the U.S. Chamber of Commerce and CTA, say they see pushing the FAIR Act through the Senate as a more appropriate vehicle to handle this issue than self-driving car legislation.

But the Democratic Energy and Commerce aide said passing that bill in the House has made it more difficult for the party to backslide on the subject in self-driving car bill negotiations, since the party leadership has already sent such a clear message that barring forced arbitration is a top priority and the FAIR Act is unlikely to pass a Republican-held Senate.

For now, Duncan said that she is encouraged by the lack of exact language on forced arbitration in the self-driving bill draft.

“It seems to be a positive indication by both Democratic and Republican staff that they agree it was an important issue that absolutely has to be addressed in any legislation,” she said. “This decision leaves room to have a reasonable discussion about what rights people should have when autonomous vehicles are on the road.”

A spokesperson for Sen. John Thune (R-S.D.), who is leading the Senate-side negotiations alongside Sen. Gary Peters (D-Mich.), said in a statement that while Thune is still reviewing stakeholder feedback on the bill draft, the senator hopes that no single issue, including arbitration, will “become an obstacle to reaching agreement on provisions” that have bipartisan support.