34% of independents, 25% of GOP say COVID-19 increases their likelihood of backing progressive proposals

Supporters of Sen. Bernie Sanders (I-Vt.) rally for “Medicare for All” on Sept. 13, 2017 on Capitol Hill in Washington, D.C. The coronavirus outbreak has made 26 percent of U.S. adults “much more likely” to support universal health care proposals. (Alex Wong/Getty Images)
By Yusra Murad

With Americans entering crisis mode over the coronavirus — self-isolating, rationing medicine and scrambling for clarity on the cost of testing and treatment — for some people, the pandemic is doing one thing many progressives have fought to do for decades: making a stronger case for universal health care.

More than 2 in 5 U.S. adults say the outbreak has increased their likelihood of supporting universal health care proposals where the government would provide all Americans with health insurance, according to new Morning Consult data. That includes 1 in 4 Republicans and 34 percent of independents. The poll has a margin of error of 2 percentage points.

Thirty-five percent of adults said the virus outbreak has not affected their likelihood of supporting universal health care proposals, while 12 percent said it has made them less likely. The March 12-13 poll of 2,201 U.S. adults comes amid a bipartisan, bicameral effort to guarantee that all Americans have access to free care for the coronavirus. Democrats and public health experts have pointed to the pandemic as clear evidence of the United States’ disadvantage relative to other countries in responding to public health emergencies — unlike South Korea, Taiwan and other countries that have rapidly deployed universally accessible screening, uninsured and underinsured Americans are still priced out of care.

GOP lawmakers have echoed those calls for free COVID-19 testing and treatment, as it becomes abundantly clear that in the case of a highly contagious virus, everyone is only as healthy as their neighbor. Despite Republicans’ fierce opposition to “Medicare for All” — net support (the share who support the policy minus those who oppose) was underwater throughout 2019 — a quarter of Republican adults say they are more likely to back universal health care proposals because of the current crisis.

At this point, it’s unlikely that the pandemic will generate enough momentum for universal health care among Republicans to make a meaningful, long-term difference. But as COVID-19 looms over the election, the poll suggests Democrats — who seized a House majority in 2018 in part by highlighting the Trump administration’s failure to reduce the share of uninsured and demonstrated commitment to undermining the Affordable Care Act — will have a strong argument for proposals to expand health care to all, in the context of an infectious disease outbreak that does not discriminate. 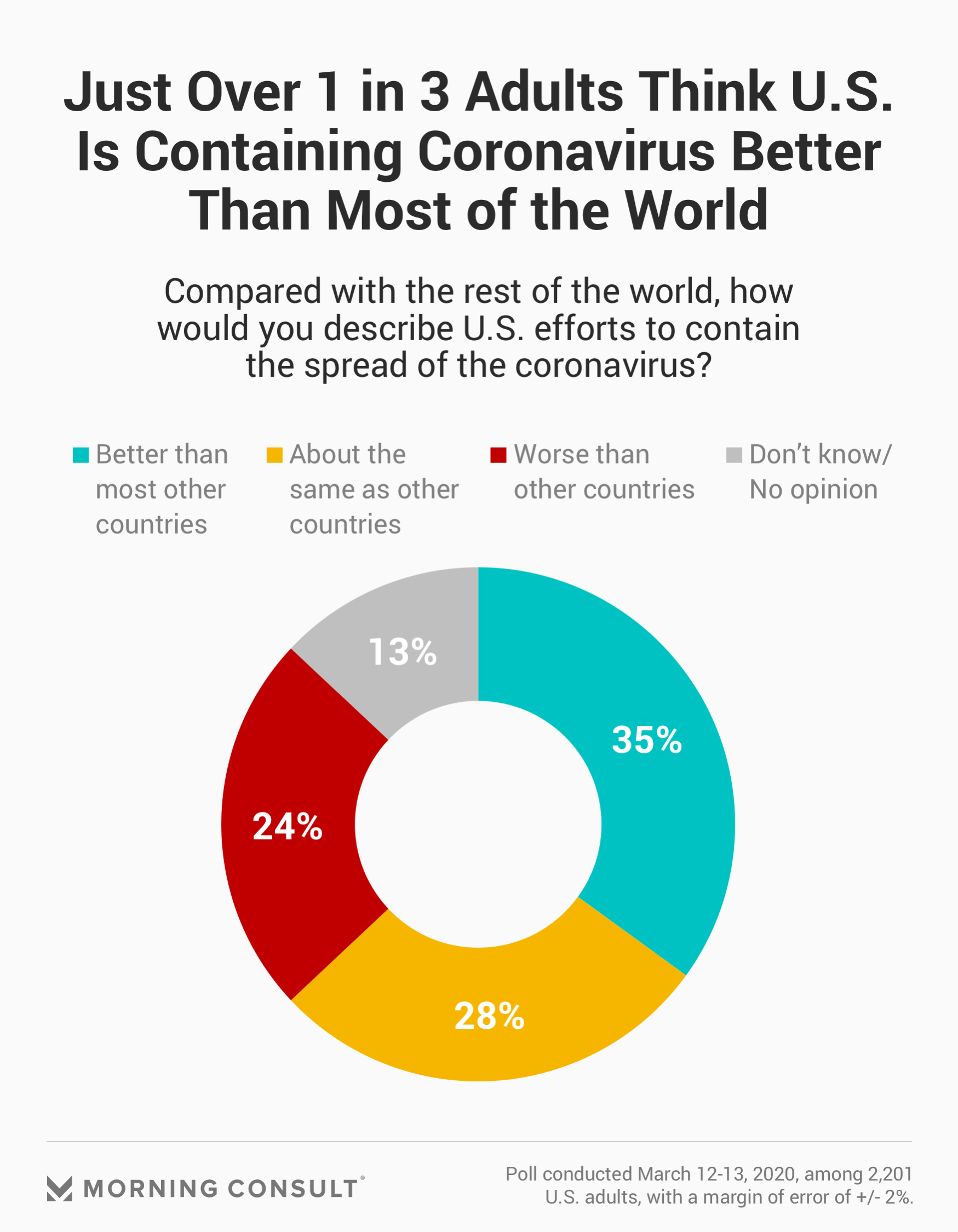 The poll also found that half of the public is willing to heed advice from health officials and avoid public places such as shopping malls and museums. But other social distancing measures are less popular — more than half of adults say they are not avoiding public transportation or gatherings with friends and family, which experts say are critical in reducing transmission.

As Americans begin retreating into their homes, and photos of barren grocery shelves populate Twitter and cable news, adults are equally concerned about someone in their family becoming infected and a shortage of groceries and hygiene products (67 percent and 66 percent, respectively). Fear of job loss varies by age, and is higher among young adults and nonwhite adults.