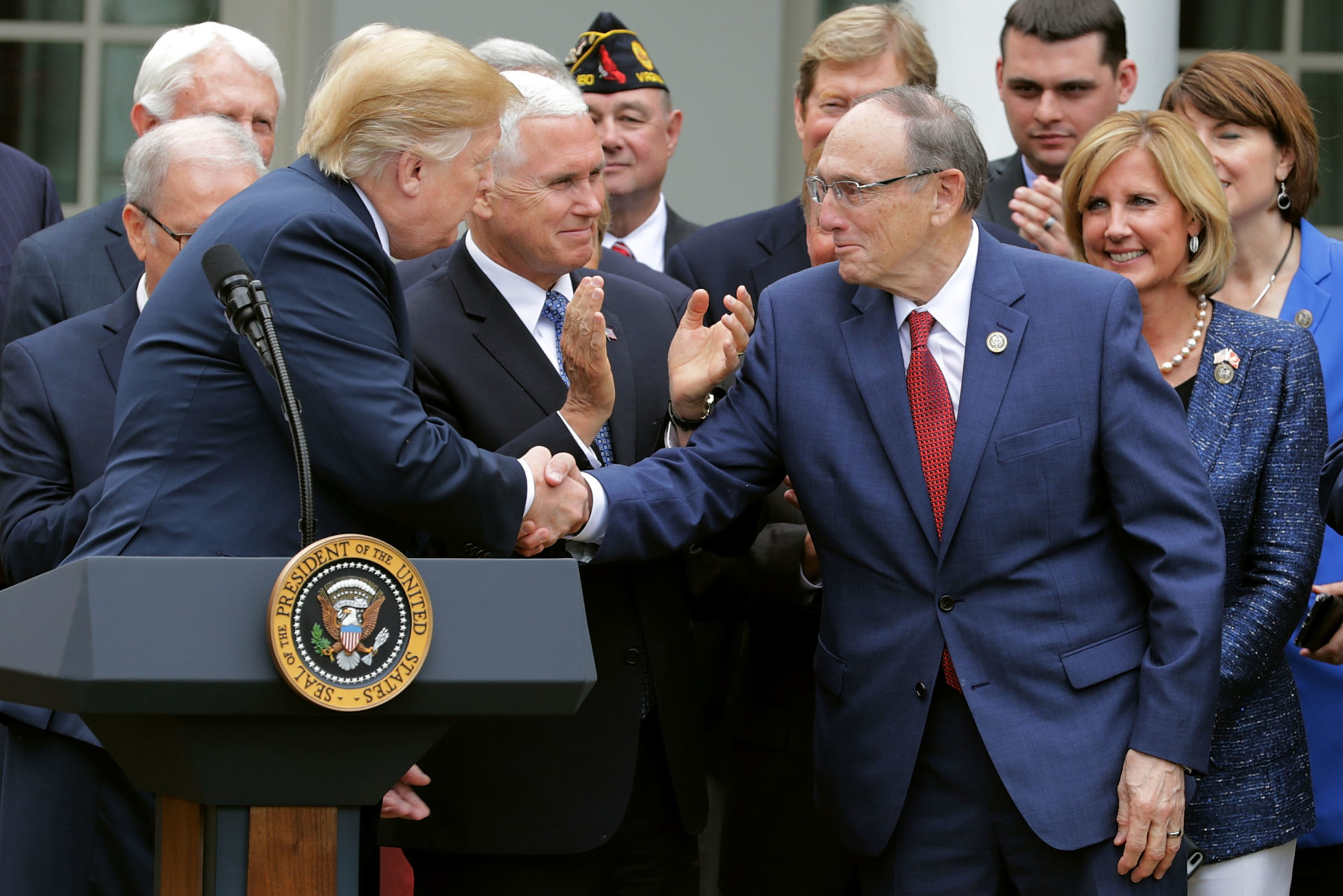 President Donald Trump shakes hands with Rep. Phil Roe (R-Tenn.) during the signing ceremony for the Veterans Affairs Mission Act at the White House on June 6, 2018, in Washington, D.C. Roe told Morning Consult that the VA is working on tapping into its backup supply of drugs and medical equipment to respond to the coronavirus outbreak. (Chip Somodevilla/Getty Images)
By Yusra Murad

The Department of Veterans Affairs is making preparations to unlock its backup supply of drugs and medical equipment to relieve medical facilities that may face shortages amid the coronavirus outbreak, Rep. Phil Roe (R-Tenn.) said in an interview Friday.

As part of the agency’s “fourth mission” to provide emergency relief, the VA has a stockpile of supplies — including respirator masks, drugs and IV fluids — meant for use in emergency situations, such as hurricanes, national disasters and earthquakes.

Roe, the ranking member on the House Veterans Affairs Committee and co-chair of the GOP Doctors Caucus, said the agency has been making preparations to deploy the materials since January, when the virus first reached the United States. The lawmaker said he spoke with Richard Stone, the undersecretary of health at the VA, on Thursday.

“It’s being put in motion. For the last two months, they’ve been behind the curtain planning for the worst case,” Roe said. “There’s a huge stockpile back there.”

The supply falls under the agency’s Office of Emergency Management. Using those materials would not require direct action from President Donald Trump, Roe said, but the agency works with the Department of Homeland Security and the Health and Human Services Department. According to Christina Mandreucci, press secretary for the VA, the agency has deployed: a liaison officer to the HHS Secretary’s Operations Center; 16 nursing assistants to assist HHS and the Centers for Disease Control and Prevention with screening of repatriated Americans; and five managers to assist with HHS incident management teams on the ground at each repatriation site.

The agency’s emergency preparedness exercises began months ago and VA facilities are equipped to handle an influx of coronavirus cases, Mandreucci said in an email, adding that there is no need to release the resources it has in the stockpile to aid in the U.S. response at this time. Still, the agency “stands ready to support national, state and local emergency management, public health, safety and homeland security efforts,” she said.

On Friday, a group of senators sent the VA a letter requesting information about whether the supply of respirators and ventilators is sufficient in the event the agency would need to deploy its materials for non-veterans, as part of the broader domestic response, according to a Stars and Stripes report.

Though Roe said he does not have further details on the contents of the stockpile because that information is classified, he said the agency made some adjustments following Hurricane Maria after the natural disaster caused a shortage of IV fluids in the United States (Puerto Rico is a major supplier of IV bags).

There are multiple caches of the materials across the country, though previous reports have suggested some respirator masks have decayed and some drugs have expired. But the hope is that if a hospital runs short on necessary supplies — which federal health officials have warned is increasingly likely — the VA could help offset the loss.

Bracing for an influx of patients as the coronavirus outbreak accelerates across the nation, hospitals are beginning to reach into the Strategic National Stockpile for personal protective equipment. And as a growing number of states are requesting additional materials, the Trump administration has made several assurances that it will use every tool at its disposal, while private-sector companies ramp up production.

This story was updated with comment from the VA.