‘The Hunt’ Is Back On, but Audiences Are Split on Its Release 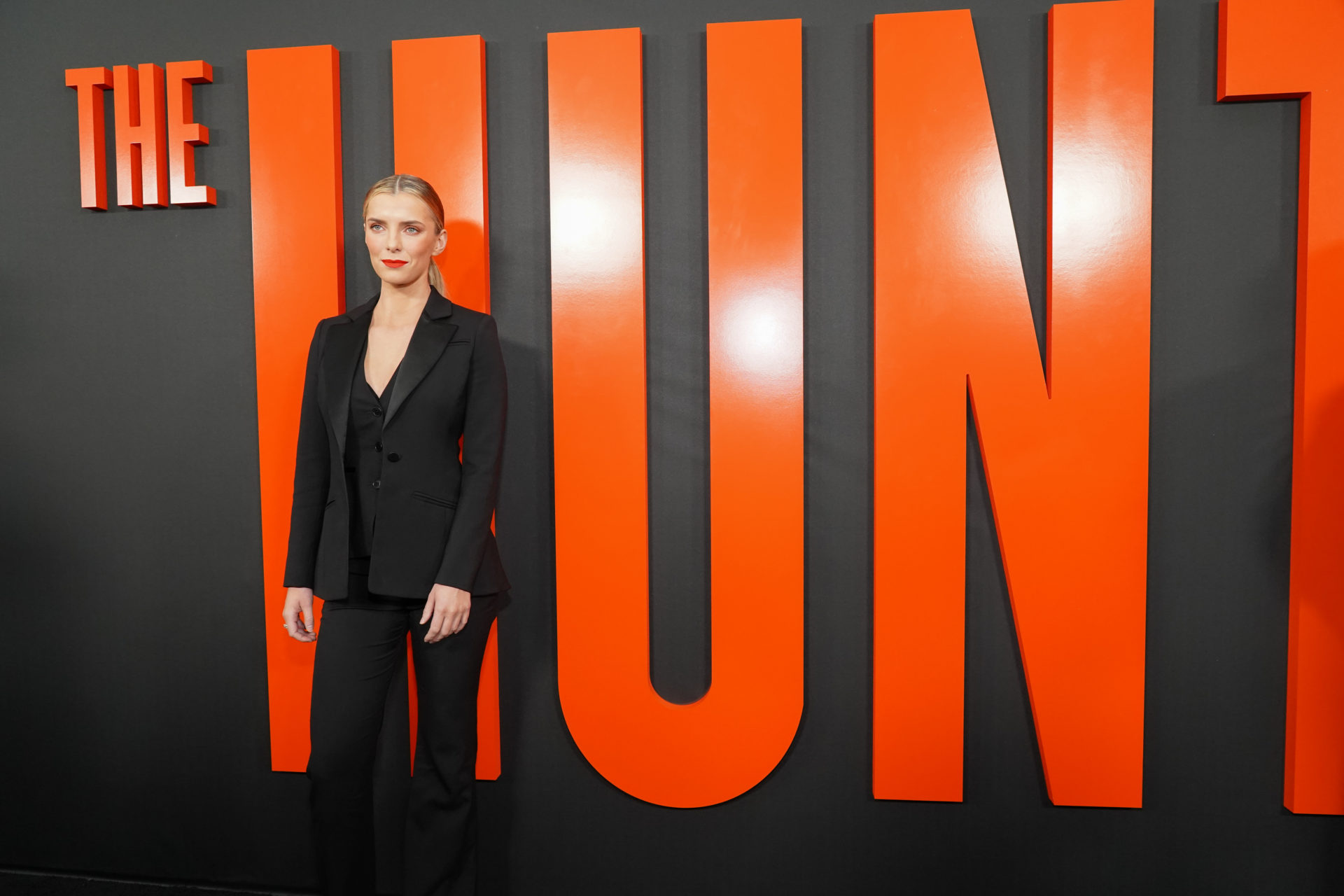 Betty Gilpin attends the premiere of Universal Pictures' "The Hunt" at ArcLight Hollywood on March 09, 2020 in Hollywood. Forty percent of the public approve of Universal's decision to release the film, compared to 61% who supported the decision to cancel its August release. (Rachel Luna/Getty Images)
By Sarah Shevenock

“The most talked about movie of the year is one nobody’s seen yet.” That’s the tagline for “The Hunt,” the Blumhouse-produced and Universal Pictures-distributed film that was pulled from release in August in the wake of mass shootings in El Paso, Texas, and Dayton, Ohio.

The film, which follows so-called “elites” hunting “deplorables,” is now set to premiere March 13. While audiences were united in their support of the film’s cancelation last year, new data shows they are now more divided over the release of the controversial thriller.

A March 4 Morning Consult survey of 1,002 adults found that the public is split, 40 percent to 43 percent, on Universal’s decision to release the film after viewing the movie trailer. That’s a change from an Aug. 15-18 Morning Consult/The Hollywood Reporter poll of 2,200 U.S. adults, where 61 percent of respondents supported Universal’s decision to shelve the film in the wake of mass shootings. 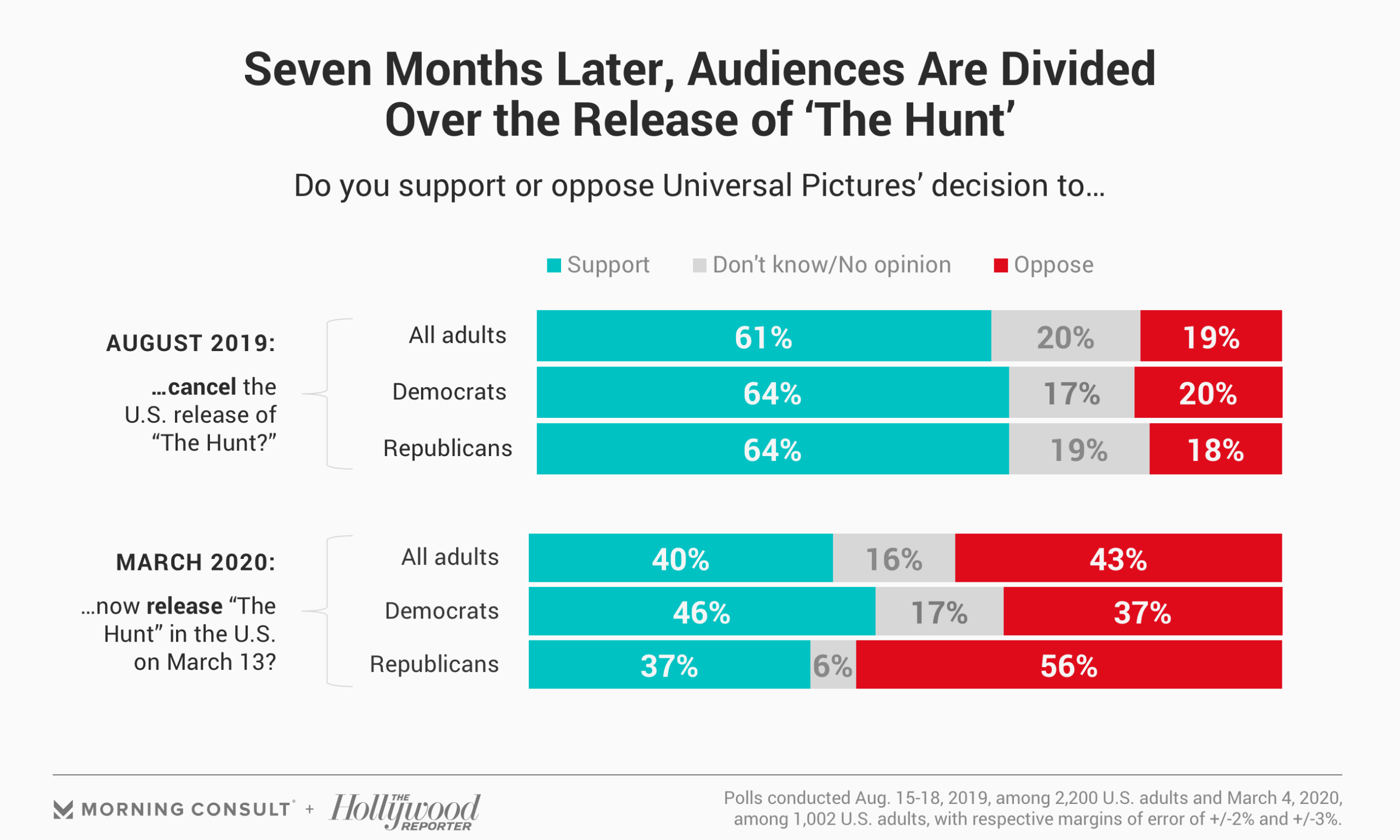 In the August survey, Democrats and Republicans were in agreement over the cancellation — 64 percent of each party supported the decision — but partisan divides emerged in the March survey. Forty-six percent of Democrats support the release of the film now, while more than half (56 percent) of Republicans oppose the decision to release the film.

Morning Consult conducted a dial test of Republicans' and Democrats' reactions to the new trailer for "The Hunt."

Respondents in the March survey were asked to watch the film’s new trailer and gauge how they felt from moment to moment throughout the 90-second video. Adults overall only had positive feelings about the trailer for the first four seconds. Sentiment became — and stayed — negative as soon as actors in the film were shown waking up, gagged, in a wooded area, before imagery of guns and violence, and dialogue including a reference to “liberal elites” was featured.

When looking at attitudes along partisan lines, both Democrats and Republicans had overall negative views about the trailer, though Democrats tended to be more positive than Republicans. Both parties showed increased negative sentiment when the trailer first made reference to “liberal elites” and hunting people for sport, as well when scenes of violence were featured.

Related: As Film, Television Seek Inspiration In Real Events, How Soon Is Too Soon?

The debut of the controversial film release comes at an uncertain time for movie theaters. A number of high-profile spring releases — including “No Time To Die” and “A Quiet Place II” — have been delayed due to concerns over the coronavirus pandemic. And Universal Pictures announced it would be postponing the release of its summer blockbuster “Fast 9” by nearly a year: The film, slated to open in the United States on May 22, will now debut domestically on April 2, 2021.

A Feb. 28-March 1 Morning Consult survey of 2,200 U.S. adults found that 62 percent of respondents said they would be less likely to go to a movie theater if the coronavirus spread to their community.

So far, Universal’s big hit of the year has been another Blumhouse film, “The Invisible Man,” which has grossed more than $104 million worldwide on a $7 million budget. “The Hunt,” which has a production budget of $14 million, per IMDBPro, is expected to bring in between $6 million and $11 million at the domestic box office this weekend, according to BoxofficePro.

Related: Most Adults Back Universal’s Decision to Cancel U.S. Release of ‘The Hunt’