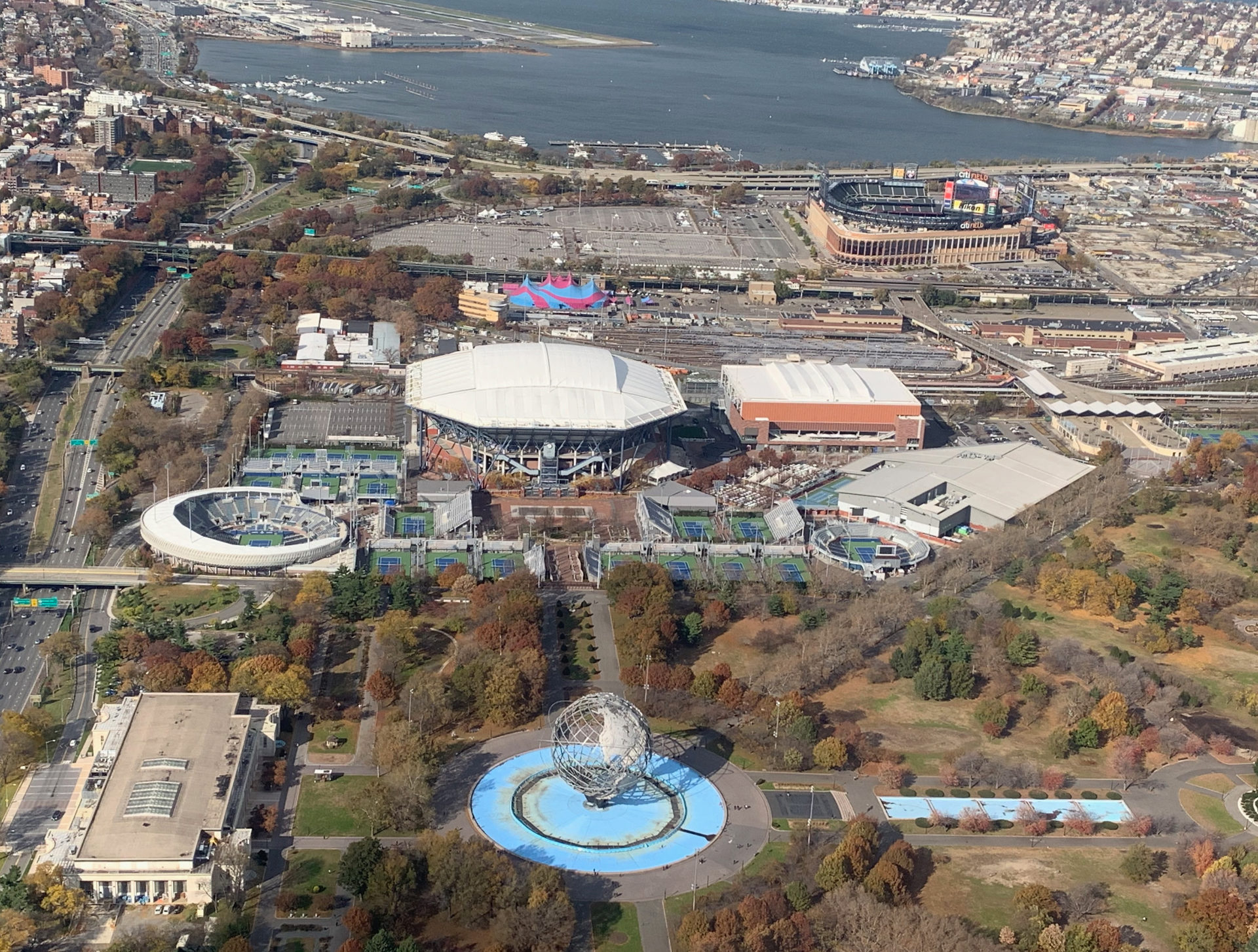 An aerial view of the Billie Jean King National Tennis Center in Queens, New York, which the U.S. Tennis Association is hoping to leverage for non-tennis events. (Bruce Bennett/Getty Images)
By Alex Silverman

As most sports properties were announcing postponements or cancellations last week due to the coronavirus pandemic, the Big3 basketball league started selling tickets for its upcoming festival-style event at the Billie Jean King National Tennis Center in Queens, N.Y.

The three-on-three basketball promotion, which travels from city to city, said in an email Wednesday that it is “100% moving forward” with the June 27 event, which in addition to its brand of “FIREBALL3” basketball will include barbecue, live music and a number of to-be-announced activities put on by sponsors. The league also has public events scheduled this summer in Memphis on June 20 and Portland on Aug. 22, along with a to-be-announced city for its championship on Aug. 29, with the other six weeks of the season scheduled to be played behind closed doors in Los Angeles.

Whether or not the New York event ultimately takes place, the plan offers some insight into how the U.S. Tennis Association plans to use its upgraded facility once the coronavirus pandemic passes.

Danny Zausner, who serves as chief operating officer of the National Tennis Center, said the organization is in the “incubator” stage of cultivating a non-tennis events business after hosting the Fortnite World Cup Finals esports event last summer. It’s something the organization, which derives more than 80 percent of its annual revenue from the U.S. Open, sees as a potential driver of incremental income.

“I don’t think we’re going to get in the business of hosting 40 rock concerts here on an annual basis, but we do think these one-off special events are right up our alley,” Zausner said on March 13, when tickets for the Big3’s National Tennis Center event went on sale.

After a $650 million upgrade completed just in time for the 2018 U.S. Open, the finished 40-acre campus features three stadiums, two of which are equipped with retractable roofs, a total of 22 courts, concession facilities and broadcast infrastructure throughout the entire complex. The New York area is loaded with arenas and stadiums capable of hosting all sorts of events, but Zausner believes the National Tennis Center is uniquely equipped for festival-style events that call for multiple facilities on one site, as well as a mix of indoor and outdoor space and modern amenities.

“There’s no venue that has multiple facilities at various capacities and open space with all the infrastructure in place,” he said. “It’s very unique for that.”

While the tennis center does have two venues with roofs, neither is climate controlled, making the winter months a tough sell for potential event organizers. And in a normal year, the weeks leading up to and following the U.S. Open are generally dedicated to pre- and post-production of the center’s marquee event, which is anchored around Labor Day. That leaves spring and early summer as the sweet spot on the calendar for the USTA to build its event business.

The Big3 will hold its main competitions in the brand new Louis Armstrong Stadium, the second-largest venue on the campus with a capacity of 14,000. Jeff Kwatinetz, who co-founded the Big3 with rapper-turned-businessman Ice Cube, said he expects a sellout based on the league’s consistent crowds at Barclays Center in Brooklyn in each of its three seasons.

“People in New York love the U.S. Open — they love it,” Kwatinetz said. “That’s part of the experience. We want our fans to really enjoy where they see our games and everything that’s around the games. So this is a great venue that checks all those boxes.”

Zausner said that in addition to providing incremental revenue, holding a few events in the months leading up to the Open would also help the USTA prepare its staff for the main event. He also believes non-tennis events are a vehicle to introduce new audiences to the USTA, its year-round programs and, of course, the U.S. Open.