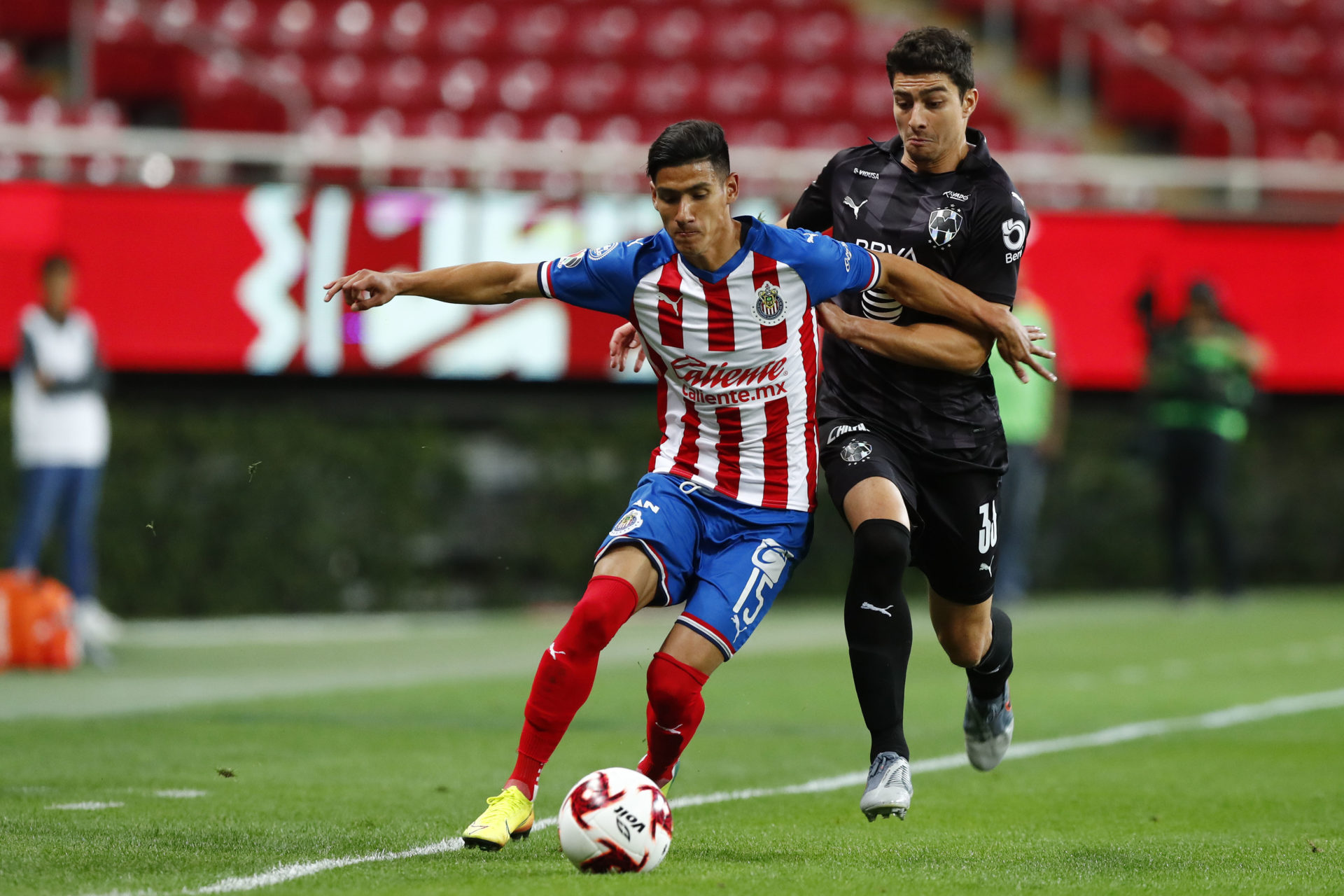 Carlos Antuna of Chivas fights for the ball with John Medina of Monterrey during a March 14 match played behind closed doors in Zapopan, Mexico. On short notice, Chivas offered a simulcast of the match to several U.S.-based networks, and negotiators for the club say they're looking to strike a deal that makes that kind of arrangement more permanent. (Refugio Ruiz/Getty Images)
By Alex Silverman

Mexican soccer club C.D. Guadalajara, better known as Chivas, hopes to have several U.S.-based sports networks carry its Liga MX matches beginning next season, a team representative said in a Thursday interview, an arrangement that would mark the club’s return to American television after two seasons without a rights deal.

Rodrigo Morales Abiega, a Mexico City-based vice president at Wasserman Media Group representing Chivas, said the club would like to establish a “mirror of what we have in Mexico,” where three different media companies — Grupo Televisa SAB, TV Azteca SAB de CV and Multimedios Televisión — and team-owned over-the-top platform Chivas TV, carry its home matches. This strategy, Morales Abiega said, has allowed the club to grow the total viewership of its matches in Mexico.

“We want a simulcast with as many outlets as possible,” he said. “This is a possibility that we are currently discussing. If that’s the case, we are totally certain that Chivas viewership will grow in the U.S. as it grew here in Mexico.”

Morales Abiega also stressed the importance of making matches available in both Spanish and English to reach younger generations of Mexican-American fans, as well as soccer fans in the general market.

Though the club would also consider a “high-end” exclusive rights deal, Morales Abiega said it prefers a simulcast arrangement to maximize reach.

But a simulcast deal would be a “difficult” pitch for U.S. media companies, said a U.S. network executive with knowledge of the sports rights landscape, noting the club is unlikely to get the money it is hoping for by dividing its audience across multiple networks or platforms.

Chivas offered a glimpse at what a simulcast arrangement could look like earlier this month. When American sports ground to a halt due to the coronavirus pandemic, the team offered major U.S. sports broadcasters the right to carry its March 14 match against defending Liga MX champions C.F. Monterrey at no cost.

“Chivas saw here in America, where they had not been on television for the past year, that it could provide an opportunity for fans to have a couple of hours of enjoyment of football and a few moments to just think about other things than the difficult times that we’re all going through,” said Tag Garson, a New York-based senior vice president at Wasserman Media Group who represented Chivas in talks with the networks.

Arturo Gálvez Alfaro, legal director at Chivas, added, “It is something we wanted to do to give back in these extraordinary times since people weren’t able to go to the stadiums and see other leagues or games.”

Within 24 hours of kickoff, Univision Communications Inc.’s TUDN, Fox Deportes, ESPN Deportes, CBS Sports and live TV streamer fuboTV all signed on to deliver the match, which was also available through Chivas TV and YouTube. Fox Deportes, which regularly broadcasts Monterrey’s home matches, pulled together a 30-minute pregame show prior to the match’s 11 p.m. ET kickoff, which featured Los Angeles Galaxy star Javier “Chicharito” Hernández discussing his love for Chivas, whom he played for from 2006-10.

Across the three Spanish-language cable networks, each of which added its own commentary and graphics, the match delivered a combined average audience of 598,000 total viewers. (FuboTV and CBS Sports, which streamed the game in English on CBSSports.com and the CBS Sports app, both declined to share viewership figures.)

Saturday night Liga MX matches that air on Univision’s flagship broadcast network routinely deliver high six- and low seven-figure audiences, but the 415,000 who tuned in for Chivas-Monterrey on TUDN was the cable network’s second-best audience for a Liga MX telecast in 2020.

The match was played behind closed doors, and Liga MX has since suspended its own schedule.

Chivas matches haven’t been available on U.S. linear television since its agreement with Univision expired at the end of the 2019 Clausura season in May. During the 2019 Apertura season, which ran from July through December, the team made its matches available to U.S. fans through Chivas TV, as well as for free through social platforms like Facebook and YouTube.

This season, which is currently on hold due to the coronavirus, Chivas matches — with the exception of the Monterrey game — have been available in the United States exclusively through Chivas TV in both Spanish and English. Gálvez Alfaro said that as a result, the U.S. subscriber base for the OTT platform has grown to exceed the number of fans in Mexico subscribing to the service, which also carries Chivas-themed content beyond live matches.

For the current 2020 Clausura season, Univision and TUDN control the U.S. television rights to home matches for 14 of the 19 Liga MX clubs, including prominent sides such as Club América, Tigres UANL, Pumas UNAM and Cruz Azul. Fox Sports holds the rights for C.F. Monterrey, Club Tijuana and Santos Laguna.

A list of potential suitors for the Chivas rights would start with current Liga MX rights-holders Univision and Fox Corp., each of which have publicly expressed interest in strategically adding to their existing Liga MX rights portfolios. ESPN has made soccer a priority in building up a subscriber base for its ESPN+ streaming service, while CBS Corp. recently returned to soccer with its acquisition of the UEFA Champions League and Europa League rights beginning with the 2021-22 season, as well as the National Women’s Soccer League starting this season.