Despite a Decade of Challenges, ACA Has Support Among 55% of Voters

President Barack Obama signs the Affordable Health Care for America Act during a ceremony with fellow Democrats in the East Room of the White House on March 23, 2010 in Washington, DC. A decade later, 55 percent of registered voters support the ACA. (Chip Somodevilla/Getty Images)
By Sara Wilson

There have been few laws as contentious — or as resilient — as the Affordable Care Act. Ten years after its passage, the ACA has drastically transformed nearly every aspect of the American health care landscape through a combination of regulation, subsidies, mandates and Medicaid expansion.

Those changes have perhaps never been more salient than now, during a global pandemic, as the Trump administration relies on the law in its response, considering a special enrollment period for people to sign up for health coverage under the ACA and allowing states more flexibility in their Medicaid programs to combat the spread.

And yet despite multiple repeal efforts and ongoing court challenges to its constitutionality, the ACA — which President Barack Obama signed into law March 23, 2010 — still enjoys majority support.

Not surprisingly, voters on the left are far more likely than those on the right to support the ACA, with 83 percent of Democrats saying in the recent poll that they either strongly or somewhat support it compared to 28 percent of Republicans.

“ACA’s structural changes were substantial and are now part of the fabric of health insurance, no matter what Democrats or Republicans may say in their speeches,” said Joseph Antos, a health care scholar at the American Enterprise Institute.

Roughly 20 million Americans gained health coverage because of the ACA, partly as a result of private coverage gains due to policies such as reforms to the individual insurance market and letting young people stay on their parents’ insurance until age 26, as well as protection for pre-existing conditions. The other crucial reason for coverage increase is Medicaid expansion in 37 states and Washington, D.C.

The law “changed America to a country that no longer accepted that insurers could actively discriminate against the sick,” said Jonathan Gruber, an economist at the Massachusetts Institute of Technology who was a key architect of the ACA. “The key missing piece of our social safety net in the U.S. was the protection for the sick who didn’t get health insurance from their employer or the government.” 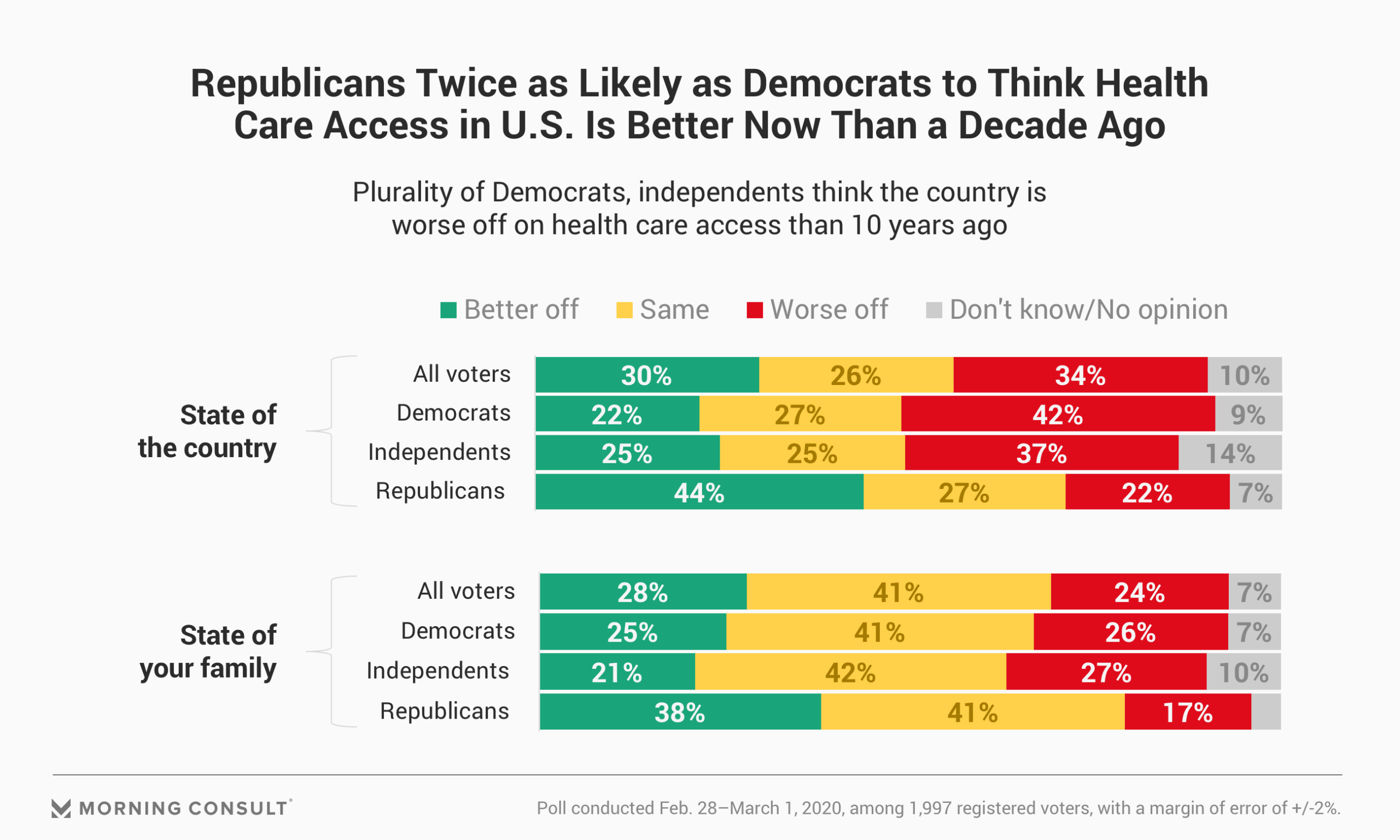 Avik Roy, president of the Foundation for Research on Equal Opportunity, surmised that the split may be a “based on partisan affiliation relative to who’s president.”

Republican lawmakers have been on a crusade to overturn the ACA since its passage, making it a critical flashpoint in recent American politics. After running largely on a “repeal and replace” platform in 2016, GOP lawmakers failed to overturn the ACA even with control of Congress and the White House. They did, however, essentially nullify the individual mandate requirement through tax law that year by lowering the penalty amount to zero.

“The ACA was a complicated puzzle where all these pieces were designed to work together,” said Wendy Epstein, a professor at the DePaul College of Law who researches health policy. “The individual mandate existed to enable the pre-existing conditions protections. And so when the individual mandate got repealed, that has already had an effect, even though it’s being implemented this year.” She noted that the Census Bureau reported 1.9 million more uninsured Americans in 2018 than in 2017.

Two-thirds of Republican voters are still in favor of the ACA being partially or completely repealed, compared to 36 percent of voters overall and 10 percent of Democrats.

And more than half of Republican voters think party lawmakers should prioritize repealing and replacing the ACA, while 26 percent think they need to shift gears to opposing “Medicare for All” — though that debate has lost urgency as former Vice President Joe Biden, a public option proponent, pulls away from Medicare for All champion Sen. Bernie Sanders (I-Vt.) in the race for the Democratic presidential nomination.

Experts say repeal and replace at this point is unlikely, with most changes to the ACA happening in the courtroom, not the Capitol, including the 2012 Supreme Court ruling that made Medicaid expansion optional for state governments.

The Supreme Court agreed earlier this month to hear Texas v. United States, a lawsuit brought by a coalition of Republican governors and attorneys general alleging the deactivated individual mandate is unconstitutional, and not severable from the rest of the law. A 36 percent plurality of voters think the courts should not repeal the ACA, but it’s a highly partisan issue: Sixty-one percent of Democrats are against repeal through the court system, versus only 8 percent of Republicans. 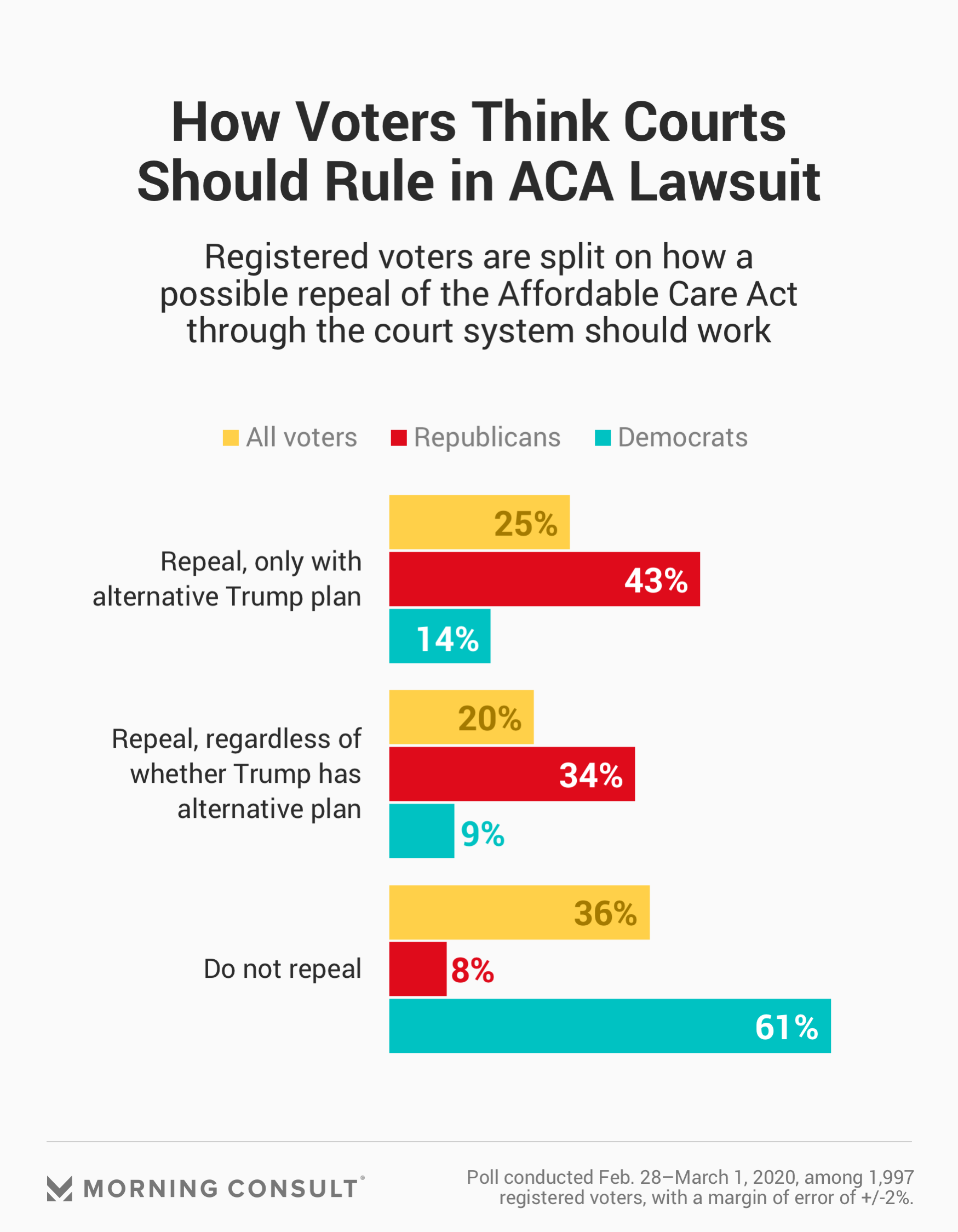 Epstein said that even though the court leans more conservative now after President Donald Trump appointed Justices Neil Gorsuch and Brett Kavanaugh, the Texas case stands on shaky legal ground and is unlikely to eviscerate the ACA, especially because Chief Justice John Roberts has “saved” it in previous cases.

“I am firmly in the camp of folks who believe that even if the individual mandate is determined to be unconstitutional, it should readily be severable from the rest of the law,” she said. “It’s hard for me to imagine a world where the Supreme Court determines that it’s not severable. It’s just not a sound legal decision.”

At this point, the Trump administration has no backup plan in the event that courts do repeal the ACA, giving some people who support repeal pause — 43 percent of Republicans think the courts should repeal the ACA only if the administration has a plan to calm the uncertainty that would inevitably follow the disappearance of such an overarching health care framework. Still, roughly a third of Republicans support repeal regardless.

The ongoing legal and regulatory uncertainty “makes it very hard for insurance markets to function well,” according to Katherine Baicker, an economist and dean of the University of Chicago Harris School of Public Policy. “To get good risk pooling and financial protections in insurance markets, you need stable pricing environments and clearly understood subsidies and participation requirements.”

At the end of the day, experts agree that the ACA has become entrenched in the American health care system, and many of its provisions remain popular, such as the plain-language requirement: Ninety percent of registered voters support the requirement that health insurance companies explain their benefits in clear language.

Voters also widely support the ACA’s hallmark protections for pre-existing conditions. That favorability transcends party lines, with support from 89 percent of Democrats and 86 percent of Republicans.

“Whatever happens with Obamacare, support for pre-existing conditions is something that” Republicans can get behind, Roy said. “It’s overwhelmingly popular and it’s not controversial. There are very few people in Republican circles who think it’s terrible Obamacare includes that regulation.” 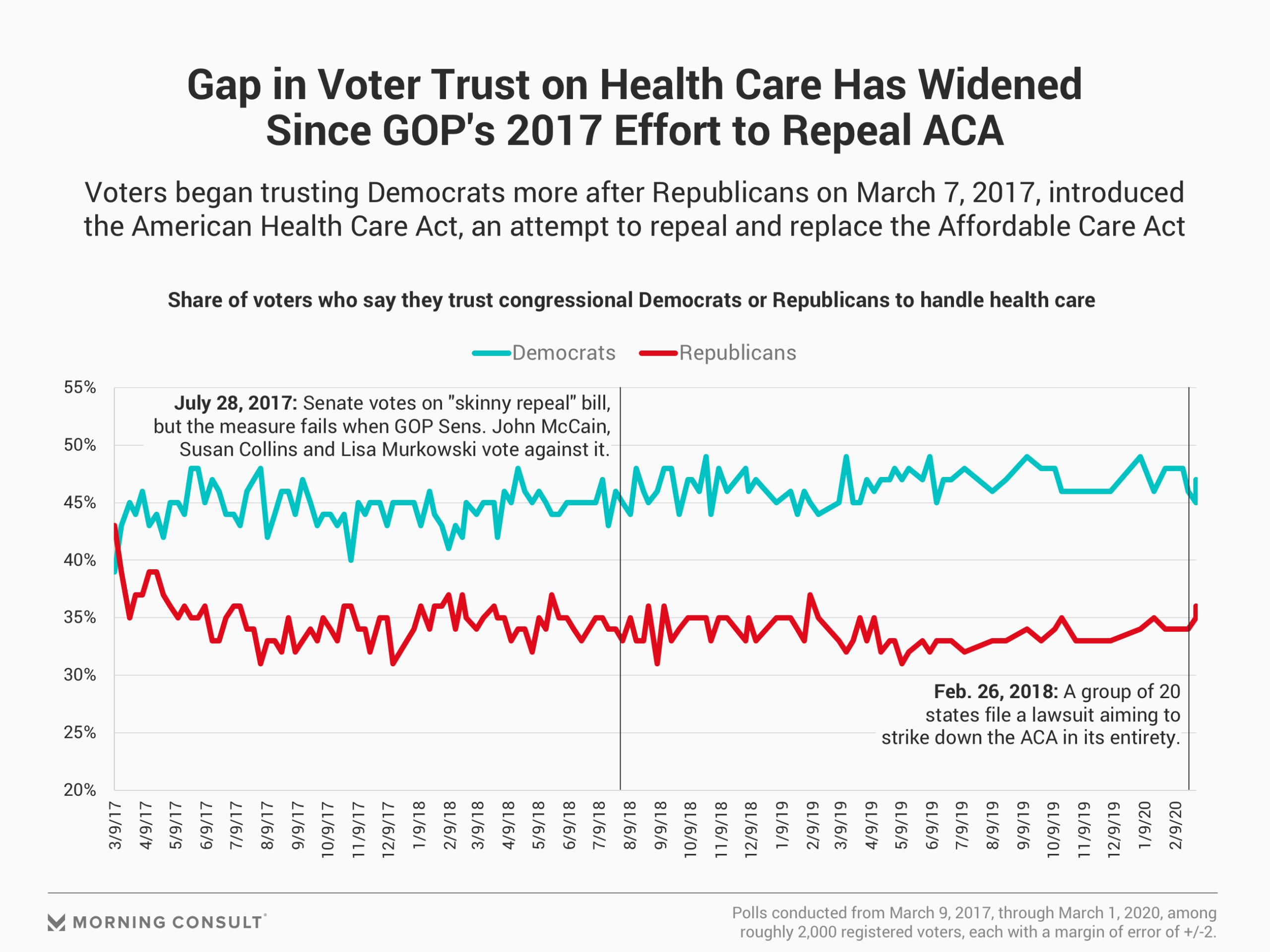 Fifty-six percent of voters attribute the current state of the ACA to Obama, even though the Trump administration has made significant changes to it, such as allowing states to impose work requirements for Medicaid, ending cost-sharing reduction subsidies to insurers and slashing funds to advertise Healthcare.gov signups. This leaves the overall sustainability of the law in question.

“Even the biggest supporters of the ACA have a lot of ways that they want to improve upon it,” Epstein said. “I don’t think anybody wants to just leave the ACA as it currently is, particularly as it’s been chipped away at by the current administration. There’s a pretty long list of ways that we could make the ACA better than it is right now.”

For Baicker, that could mean making “relatively small fixes” to the law.

“You look at something like the legislation that enacted Medicare and Medicaid,” she said. “These are incredibly complicated programs and there were — starting almost immediately — lots of amendments and fixes. It’s impossible to implement something as complicated and far reaching without needing to make some adjustments along the way.”