As Coronavirus Surges, ‘Medicare for All’ Support Hits 9-Month High 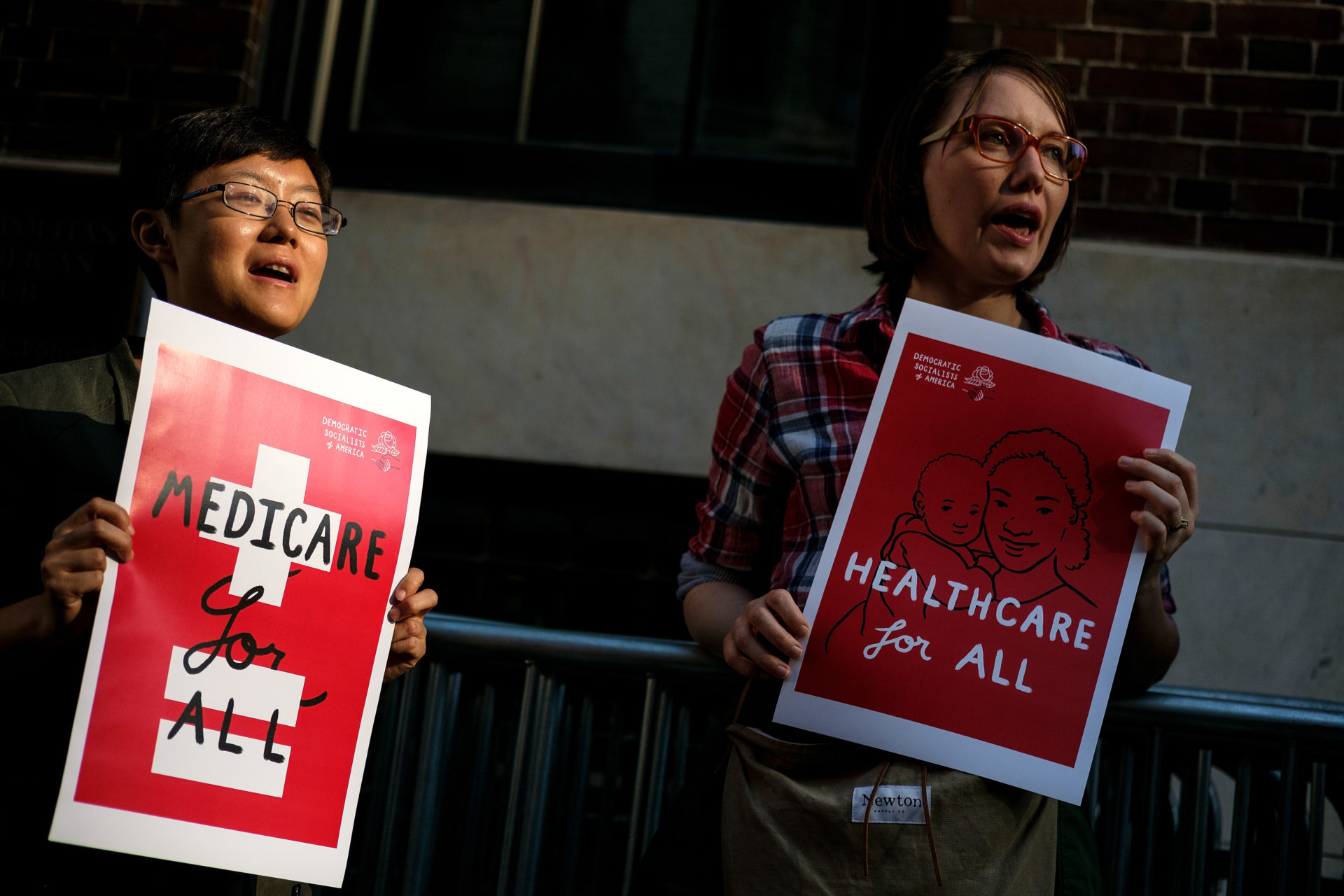 A small group of activists rallies against the GOP health care plan outside of the Metropolitan Republican Club, July 5, 2017, in New York City. In the midst of a pandemic that has spurred an economic crisis and put Americans’ health care costs in stark contrast with the rest of the industrialized world, support for “Medicare for All” has risen to its highest point in about nine months, according to new Morning Consult/Politico data. (Drew Angerer/Getty Images)
By Yusra Murad

In the midst of a pandemic that has spurred an economic crisis and put Americans’ health care costs in stark contrast with the rest of the industrialized world, support for “Medicare for All” has risen to its highest point in about nine months, according to new Morning Consult/Politico data.

The sweeping health reform package championed by Sen. Bernie Sanders (I-Vt.) that would provide all Americans with health insurance through the government now has support from 55 percent of registered voters, per a March 27-29 survey of 1,997 respondents, taken as the United States became the global epicenter of the coronavirus. Thirty-five percent of voters continue to oppose the proposal, putting net support — the share who support minus those who oppose — at 20 points, a 9-point jump from mid-February. 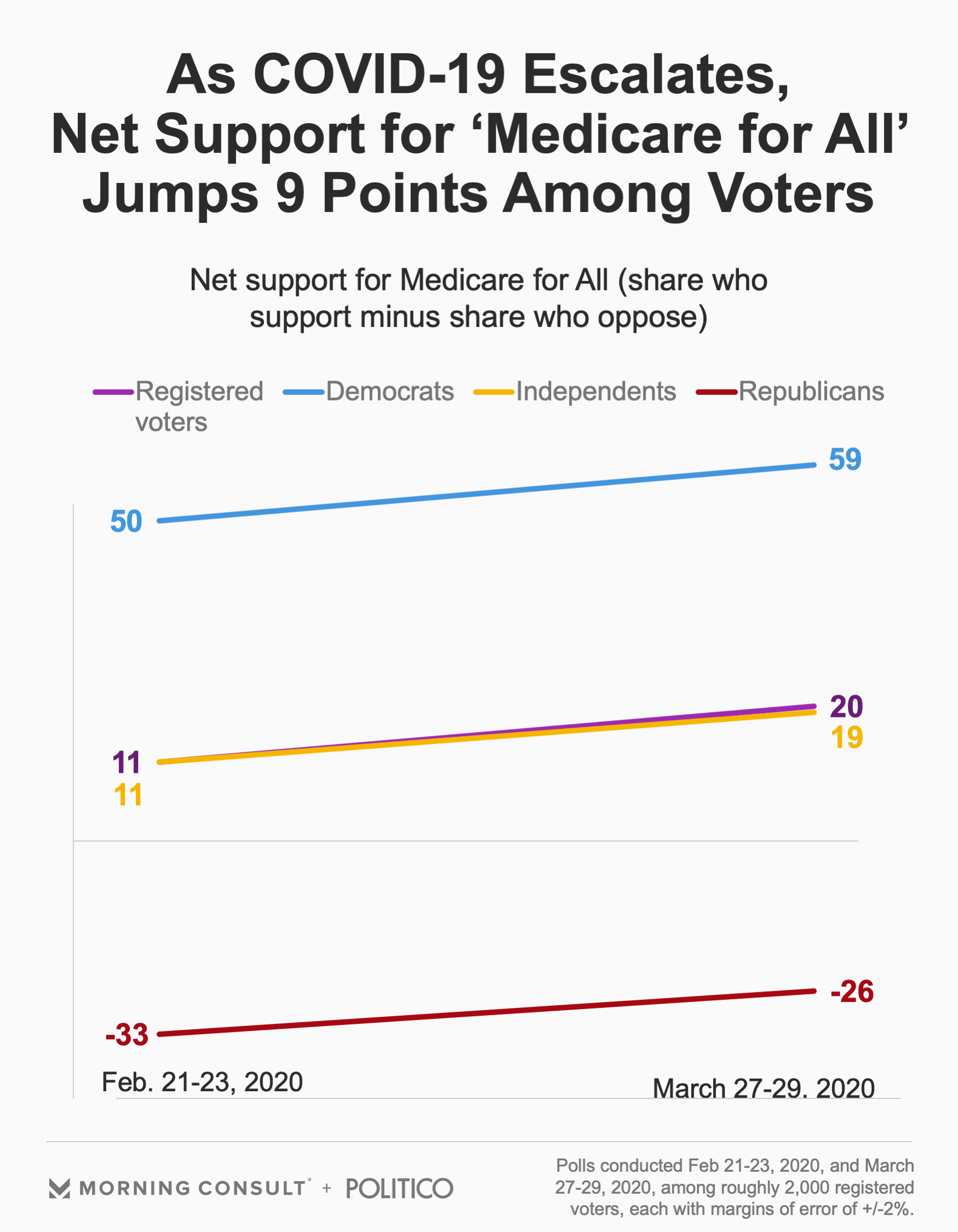 The 55 percent share is the highest level of support Morning Consult has recorded since June 2019, when 54 percent backed “Medicare for All.” The latest figure is also within the 2-point margin of error of the record-high 56 percent figure notched in January 2019, when Morning Consult began tracking the issue monthly at the onset of the Democratic presidential primary.

Though Democrats drove the movement in the most recent poll, they didn’t do so alone: For the first time since June 2019, a majority of independents are in favor of Medicare for All (52 percent), sparking an 8-point increase in net support among this demographic since February.

As the domestic COVID-19 caseload spirals and economists predict a historic surge in unemployment, millions of Americans are bracing for potentially untenable health care costs and lapses in coverage, reviving questions about the viability of a health system that relies on binding insurance to employment.

Though it remains to be seen whether the growing enthusiasm for a single-payer system will outlive the trenches of the pandemic, the poll suggests progressive lawmakers may have an opportunity to sway key demographics — support for Medicare for All grew among people in the $50,000-$100,000 income bracket, voters between 45 and 54 years old and black voters by roughly 10 points each.

Efforts on Capitol Hill to remedy barriers to care have, while providing much-needed relief, exposed the scope of gaps in the current system. Congress’ authority to mandate insurance companies shoulder the cost of testing does not apply to millions of workers with self-funded plans, as coverage varies wildly by employer. Many insured patients still run the risk of receiving exorbitant surprise medical bills if they venture out of their network for emergency care. States that have not expanded Medicaid under the Affordable Care Act are at a disadvantage compared to their counterparts, and roughly 28 million Americans have no coverage at all. In the face of the pandemic, the only program proving capable of swift, aggressive action to address COVID-19 — most recently, by providing financial relief to providers — is the federally run Medicare program.

With the discussion of enacting a universal health care system in the United States intensifying, 43 percent of voters say they are more likely to support reforms to grant all Americans health insurance from the government because of the coronavirus outbreak — a trend that has held over the past two weeks. Notably, that support does not include the frontrunner in the Democratic presidential primary election — former Vice President Joe Biden, who is running on a health care platform that focuses on bolstering the ACA and adding a public option. Biden said Monday that COVID-19 has not changed his calculus on single-payer. 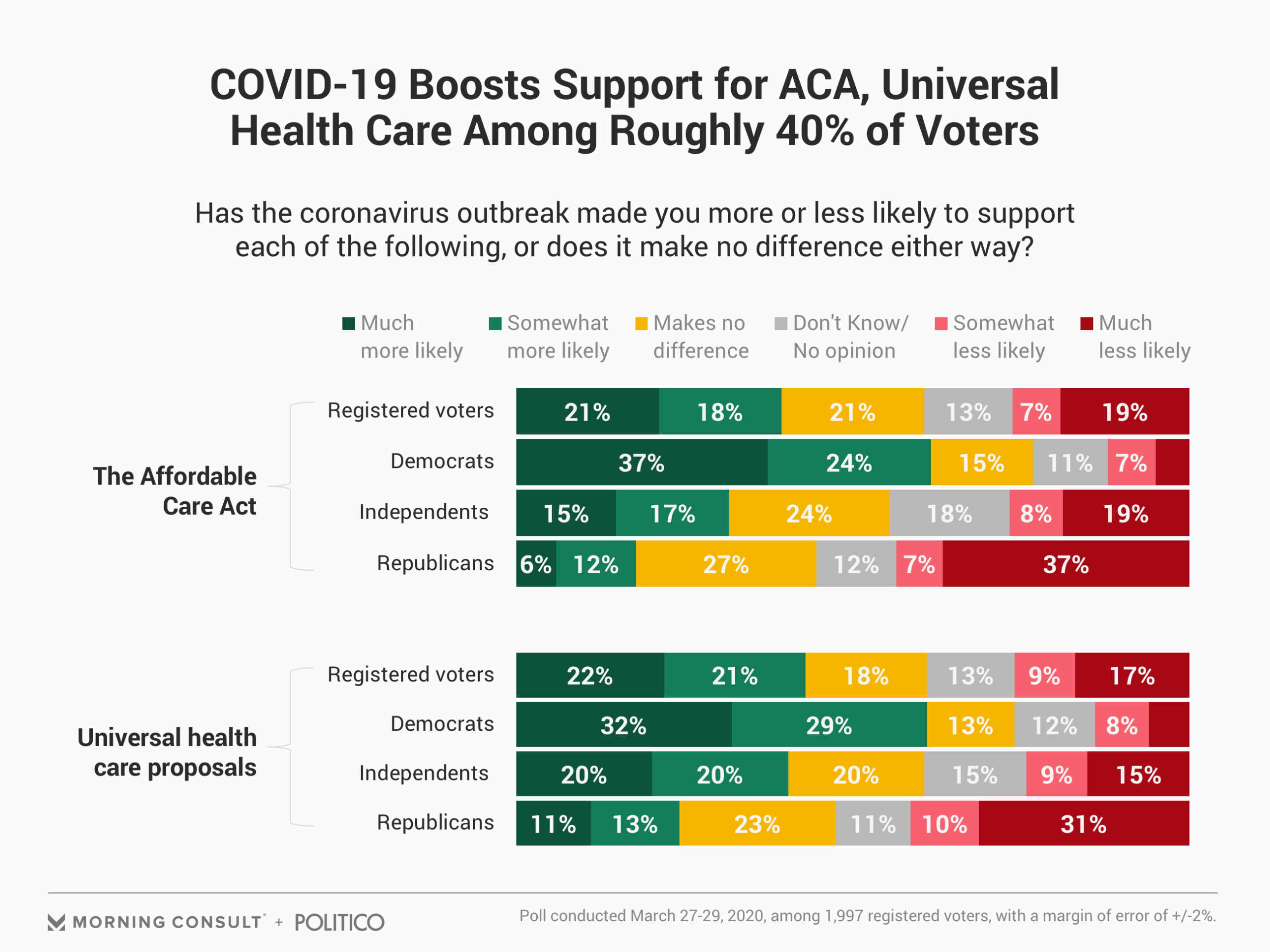 The poll also found COVID-19 has caused 39 percent of voters to say they are more likely to support the ACA, which enshrined protections for American workers that have been indispensable amid a public health crisis. However, even the pandemic has proven incapable of overcoming the fraught partisanship that has ensnared the health law since its inception: 44 percent of Republicans say the outbreak has made them less likely to support the ACA.

Related: Despite a Decade of Challenges, ACA Has Support Among 55% of Voters