Recession will take heaviest financial toll on households making less than $50,000, according to poll

A security guard stands outside shuttered shops on March 30 in Los Angeles. In a new Morning Consult poll, 34 percent of adults in the under-$50,000 income bracket said they would run out of savings in less than three months if someone in their household lost their job, while 18 percent said they have no savings at all. (Mario Tama/Getty Images)
By Claire Williams & Matt Bracken

With the economy hurtling toward what could be a deep recession, economists worry that the nature of the coronavirus pandemic could cut deeply across America’s most vulnerable workers.

Unlike the 2008 financial crisis, the economy has abruptly shuttered in response to the COVID-19 outbreak, instead of a more gradual wind-down. It’s more severe, at least early on, than previous economic slowdowns, and it’s hitting the country’s frontline workers — and those in the lowest income bracket — hardest and quickest.

The unemployment rate is expected to show a hit from the pandemic when the Department of Labor releases its jobs report Friday, with that number expected to increase further in next month’s release. American households, especially those earning less than $50,000 per year, are ill-prepared to handle that spike in unemployment, according to new Morning Consult data.

Depending on how extensive government-provided economic stimulus is — to individuals and small businesses in particular — it’s likely that many won’t be able to weather a long economic downturn. Thirty-four percent of adults in the under-$50,000 income bracket said they would run out of savings in three months if someone in their household lost their job, while 18 percent said they have no savings to fall back on at all.

An additional 11 percent said it would take less than six months for them to run out of savings, while 10 percent said they could last more than a year.

In the $50,000-$100,000 income group, 18 percent said their savings would run out in less than six months, while 25 percent could last less than three months and 6 percent had nothing saved.

Related: Bleakest Economic Views Come From Those With Front-Row View of Coronavirus Fallout

Job losses so far are expected to be concentrated among workers who likely fall into one of those income groups. Restaurants and retail stores have been the first to close as social distancing and stay-at-home orders have gone into effect, and those industries employ a high number of low-wage or tip workers. Other blue-collar work, where working remotely isn’t usually an option and in-person labor is essential, is likely to follow.

“It’s unclear what the economy is going to look like on the other side of this,” said Ryan Sweet, Moody’s Analytics Inc.’s director of real-time economics. “Unlike 2008, this is hitting Main Street much harder than the banks. Right now, it’s hard to say what’s going to happen; we don’t know when this is going to end.”

Of the 498 respondents in Morning Consult’s survey who said they or someone from their household has lost a job or both since March 1, 21 percent said that job was in the food and beverage industry, and 13 percent said it was in the retail industry. 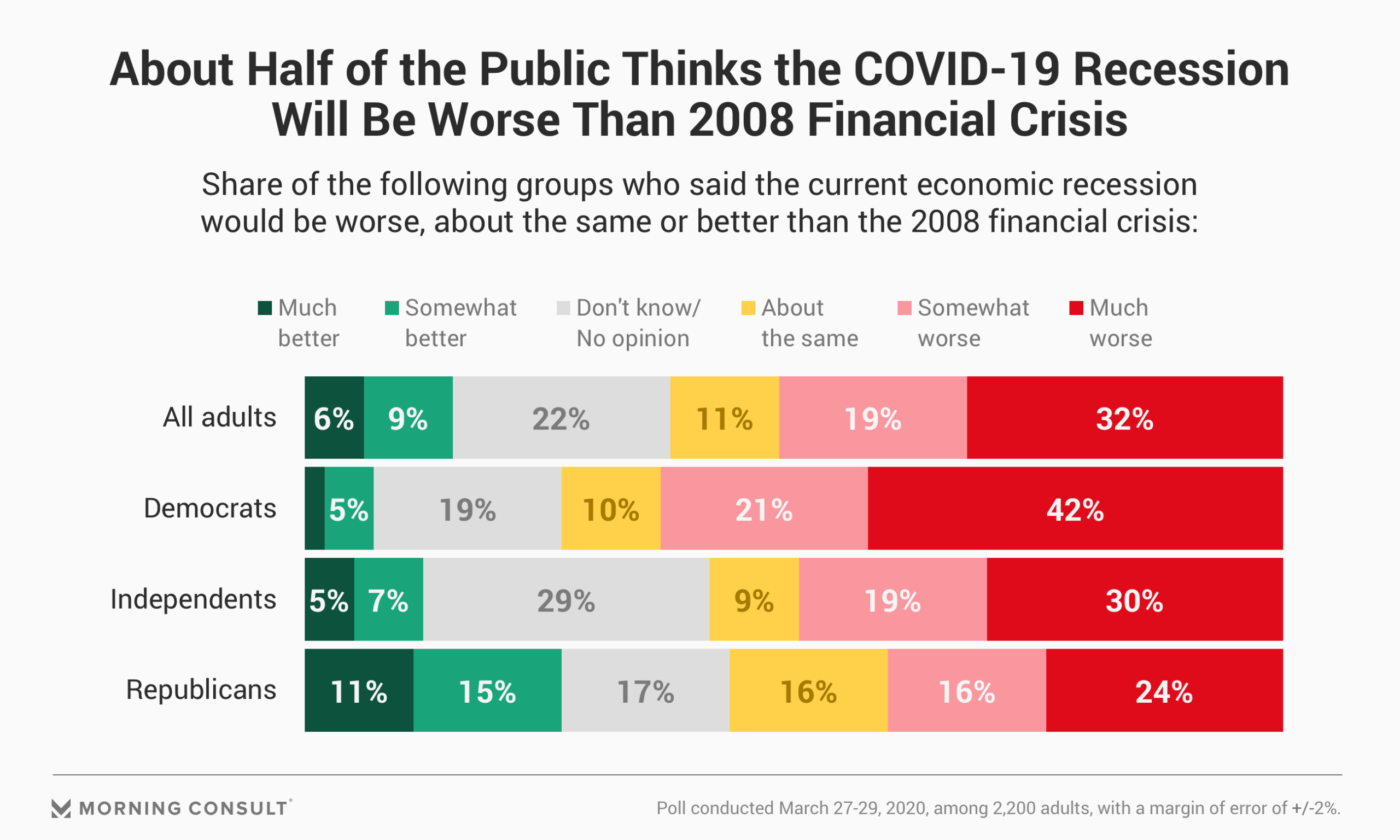 That’s compared to other sectors that often require higher degrees of education and are typically salaried positions, like publishing, entertainment and media (4 percent) and professional and business services (5 percent). The subsample of those who have lost a job or had someone in their household lose a job or both has a 4-point margin of error.

Harry Holzer, a professor of public policy at Georgetown University and former chief economist for the Department of Labor, said the primary determinant to how long those workers are forced to go without pay will be public health, and how successful we are at curbing the spread of the virus so places can safely reopen.

“The people hurt this time will perhaps look quite different than previous cases, and the longer this goes on the harder it will be for those jobs to come back,” he said. “Initially when all this started, we thought this would just be a few months. Now it’s starting to dawn on all of us that this might be months or maybe years.”

The uniqueness of the situation isn’t escaping consumers, and most Americans are noticing that the United States is gearing up for what could be a deep economic downturn. 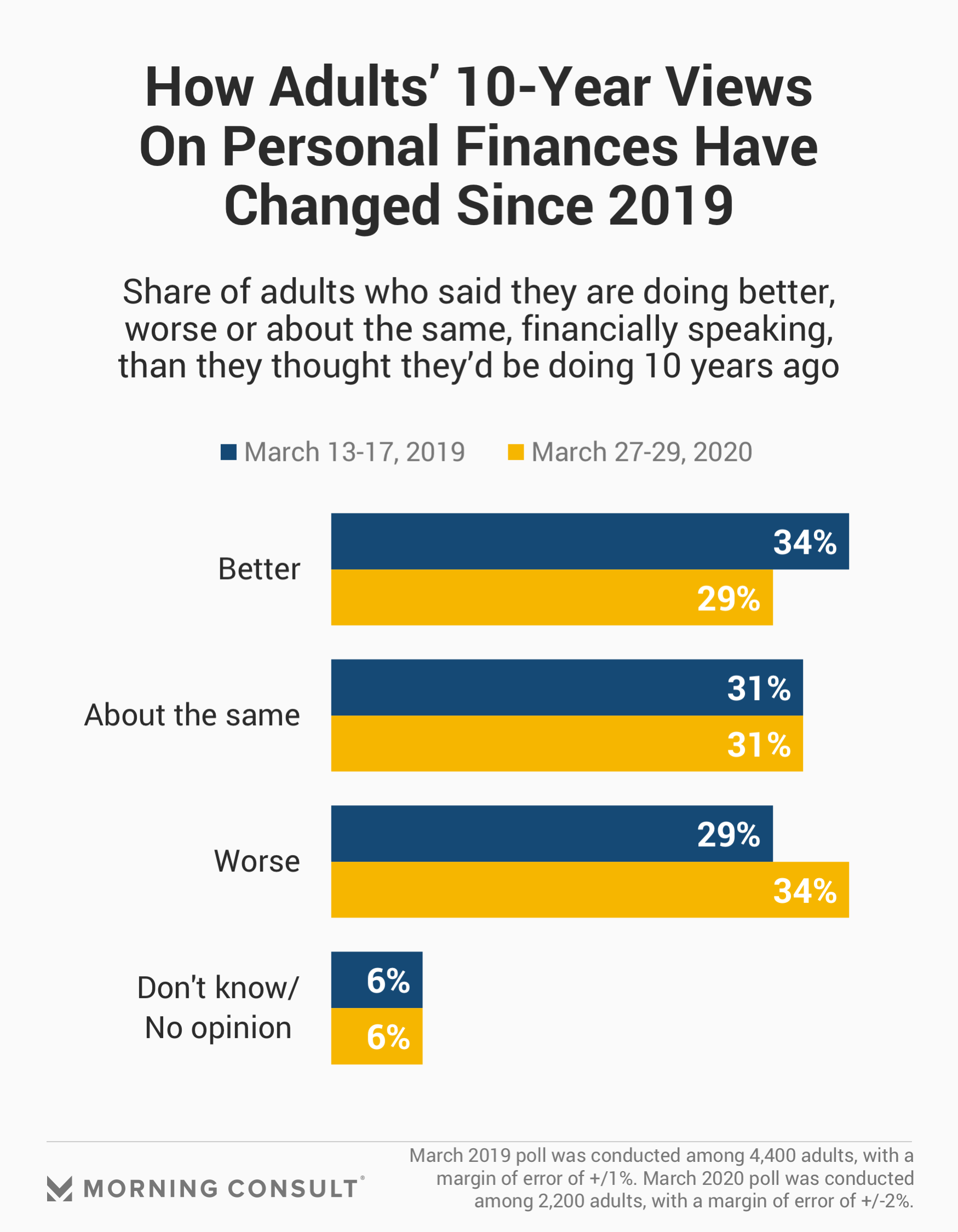 Fifty-one percent of adults said they expect the economic fallout from the coronavirus pandemic to be worse than the 2008 financial crisis, compared to 15 percent who said it would be better. Households earning less than $50,000 (29 percent) were more likely than those in the $50,000-$100,000 (15 percent) and $100,000-plus (10 percent) income groups to not know or have no opinion on the question.

As is typical with views on the economy, these results have a partisan split. Democrats were significantly more likely to say that this situation will be worse (63 percent) compared to Republicans (40 percent).

Older Americans were more likely to say this economic situation will be worse than 2008, with baby boomers (59 percent) and Generation Xers (55 percent) more pessimistic than millennials (48 percent), many of whom were entering the workforce amid the financial crisis.

“The real similarity between the current recession and the Great Recession is the global nature of both of them,” said John Leer, economist for Morning Consult Economic Intelligence. “The Great Recession started in the U.S., and then moved to Europe and ultimately weighed down global growth for a decade. The severity and duration of the current U.S. recession depends to a large degree on the ability of the global community to address domestic health problems and mitigate the economic spillover effects.”

Meanwhile, the share of adults who said they are doing better, financially speaking, than they thought they’d be doing 10 years ago has fallen 5 points, to 29 percent, from a survey of 4,400 adults conducted March 13-17, 2019. Along with that decline has been a 5-point jump in the share of adults who said they’re doing worse than they expected a decade ago, from 29 percent in March 2019 to 34 percent now.

“We know that as of 2018, higher-income households were more likely to have savings and less likely to have high debt repayment obligations. Given the nature of the economic shutdown, they’re also less likely to be laid off,” Leer said. “The converse is also true, which should be concerning for all of us.”