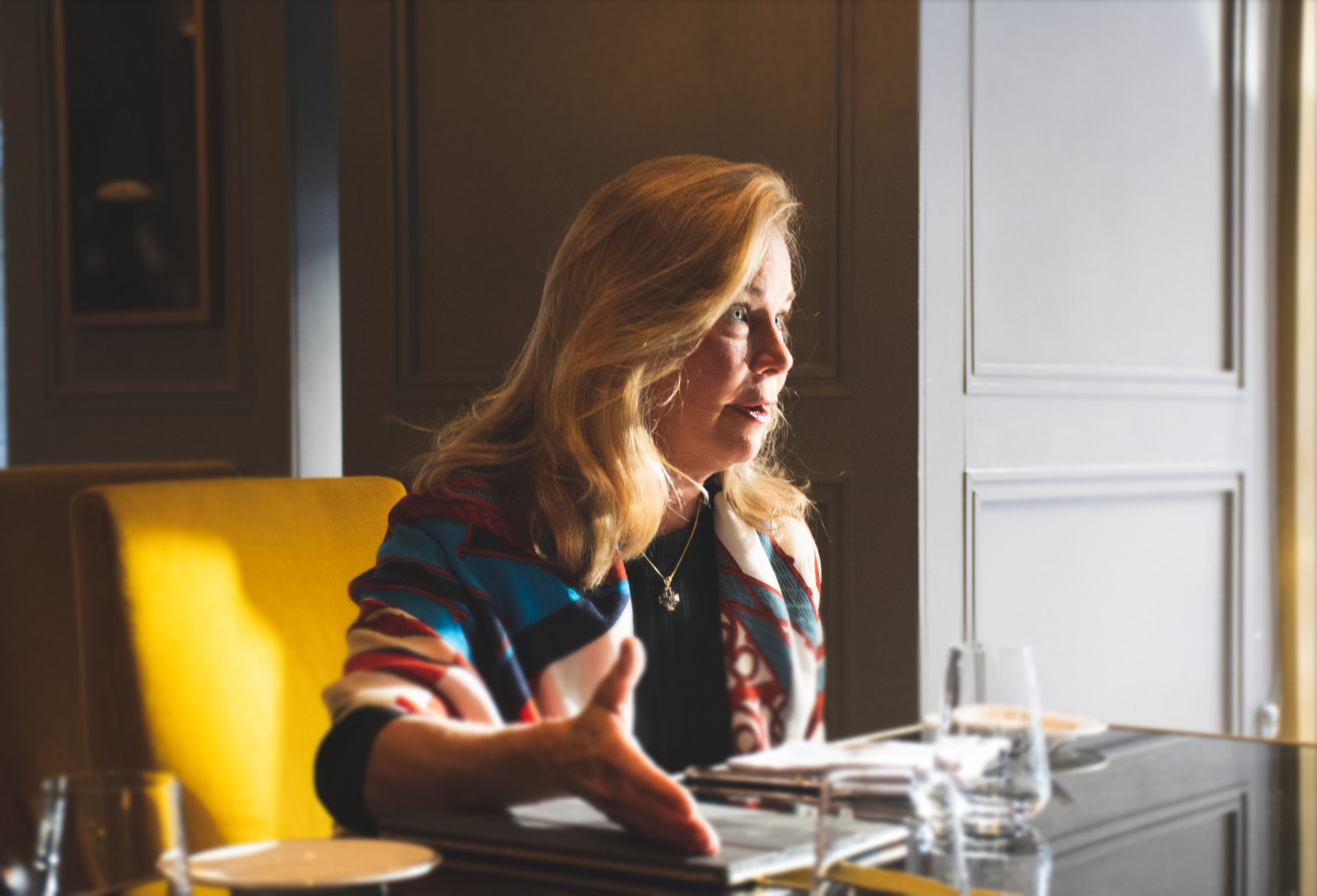 Cynthia Fisher, the founder of Patient Rights Advocate Inc., a nonprofit with the mission of supporting price-transparent models, has continued her push for more transparency in health care amid the coronavirus pandemic. (Vincent Wanga/Morning Consult)
By Yusra Murad

On March 9, Cynthia Fisher had just notched a win in her years-long pursuit of price transparency in health care. After months of darting from one office to another on Capitol Hill at dizzying speeds, Fisher — who seized the sustained attention of the Trump administration over a year ago — was celebrating the news that the Health and Human Services Department had unveiled its long-awaited interoperability rules, aiming to expand access to medical records and ease the migration of health data.

Within one week of her long-sought victory, Fisher’s world, like everyone’s around her, changed, as the coronavirus pandemic engulfed the United States seemingly overnight. But for Fisher, a rare example of a non-lobbyist household name in the Trump administration, COVID-19 did not bring her pursuit to a screeching halt. Rather, at the apex of the pandemic, Fisher sees one final, winner-take-all opportunity to cement price transparency in the U.S. health care system.

“This is a shape-shifting moment — we’re at this inflection point,” Fisher said. “It is probably the last moment of time for transparency, or we go to ‘Medicare for All.’ Either way, we need transparency.”

At a moment that has laid every fault of the U.S. health system bare, Fisher has found a new urgency in the fight she has been in for decades, adamant the United States not ignore the writing on the wall and miss a chance to usher in a new era of price transparency to protect patients before the next public health emergency comes their way.

A Boston native, Fisher, 59, glides through Washington like a veteran of the district, well-acquainted with the halls of Congress and innermost workings of federal health agencies from her work with the Food and Drug Administration on regulation of human tissue in the mid-1990s. Twenty-some years later, distinguishing the roads to dead ends from the roads to Notices of Proposed Rulemaking comes naturally.

Within 18 months of founding Patient Rights Advocate Inc., a nonprofit with the mission of supporting price-transparent models, Fisher found herself across the table from several top officials in the Trump administration — and soon enough, President Donald Trump — pitching the central thesis of what she now considers her life’s work: putting patients in the driver’s seat, and letting them shop for care in a free, transparent market.

Less than two years later, three transparency efforts championed by Fisher were underway in Washington: the now-finalized interoperability rules, transparency rules for insurers under White House review and a rule mandating hospitals post prices, which is currently tangled in the courts. With amicus briefs, committee assignments and close relationships with top administration officials, Fisher has staked out ground in the trajectory of each — even as the COVID-19 pandemic rages.

“This is David and Goliath kind of stuff,” said Don Rucker, HHS’ National Coordinator for Health Information Technology. “We see a lot of people in D.C. who are lobbying to, quote unquote, help the public, that are really marginally disguised ways to line their own pockets. What she’s doing is straightforward, and in the public interest.”

In early March, Rucker’s office was widely praised for the interoperability initiative by technology companies ranging from Apple Inc. to small startups and app developers eager for a point of entry into the $3.5 trillion U.S. health care economy.

If implemented in tandem with the initiatives pushing hospitals and insurers to disclose prices and negotiated rates, the rules would fundamentally reshape the way Americans navigate the health care landscape. It’s part-and-parcel of the vision Fisher presents to the administration: “Uber-ize” health care by retooling an antiquated, opaque system to make it fit for the 21st century.

“At first, I thought the answer was in Congress,” Fisher said. But the “health care cartel,” as she calls the companies that together comprise the $1.3 trillion U.S. economy, has thousands of lawyers and lobbyists working on a coordinated effort to protect their interests. “I’m one woman.”

As the White House worked with bicameral lawmakers to hash out the “phase 3” coronavirus stimulus package and advocates from nearly every sector of the economy clamored for a provision, Fisher saw a lost opportunity for Congress to codify the hospital transparency rule that would require hospitals to post their prices, which quickly elicited a lawsuit from the American Hospital Association.

But the window is not closed. Capitol Hill is already abuzz with talks of the next government relief package, and Fisher is preparing several asks. Providers may not have the bandwidth to post their prices amid the pandemic, she contends, but insurance companies could begin posting their negotiated rates. And in the meantime, in exchange for $100 billion for hospitals tucked into the $2 trillion package, Fisher believes that not only should the administration demand the AHA withdraw the lawsuit against HHS, but all hospitals should terminate ongoing litigation targeting patients who owe medical debt. AHA declined to comment on the matter.

Fisher’s success so far is promising. Despite vehement protest from top trade groups such as America’s Health Insurance Plans and the American Hospital Association, which have spent millions lobbying during Trump’s tenure, the proposals championed by Fisher are churning ahead.

Of course, Fisher is not just any citizen. Having founded, advised and invested in several private enterprises, she has the privilege of being able to spend her own money keeping Patients Rights Advocate in business, and flexibility to spend countless hours setting meetings on Capitol Hill.

Transparency is generally framed as an issue of people not knowing what they’re paying, but this administration doesn’t necessarily see it that way — “the issue,” Rucker said, “is not that something or the other costs $100,000.” What distinguished Fisher’s philosophy, and caught the attention of a president who prides himself on business expertise, is her placement of transparency as the locus in a market economy.

Many experts have raised eyebrows at the administration’s transparency agenda. Susan Dentzer, senior policy fellow at Duke University’s Margolis Center for Health Policy, said whether patients have price information is less relevant than what they can do with that information.

“The notion that people can act on pricing information is ridiculous,” Dentzer said. “No one says ‘stop’ when they’re lying on a gurney.” Not only could disclosure erroneously push prices up, Dentzer added, the “misguided” policy distracts from the bigger issue — prices themselves.

In Fisher’s eyes, none of the rules exist in a vacuum or target one particular stakeholder group. The interoperability proposal concerns behemoth hospital systems just as much as electronic health record vendors, because hospitals “profit from the status quo by holding you hostage in the system.”

Now, Fisher is looking ahead to payment reform and has begun planting seeds in the administration about a rule requiring all payment information be digitized in one comprehensive, itemized bill.

In the event AHA doesn’t back down from its lawsuit on the transparency rule, Patients Rights Advocate is prepared with an amicus brief, on the side of the administration. And as the White House completes its review of the next insurer transparency rule, Fisher said her team is preparing for battle with groups like AHIP, which has said in previous statements that requiring the disclosure of negotiated rates exceeds the federal government’s statutory authority. And she doesn’t feel a need to split focus — the two issues are, as she says, “inherently connected.”

“With COVID-19, we are forced to manage every facet of our lives remotely. The pandemic is breaking down the barriers of industry protectionism and pushing health care into the 21st century,” Fisher said. “With a phase 4 stimulus technical correction to add price transparency, one can imagine the near-term mobile apps that will provide price, payment and our complete health information transparent to us via mobile apps.”